Earlier this year Horologium wrote about the Altiplano 900P that was released at SIHH 2014, the 3.65mm thin watch that was the product of three years of research and the thinnest mechanical watch in the world at its release. We also pondered what SIHH 2015 might bring.

Well it brings a new ultra-thin hand-wound chronograph to the Altiplano collection. With a 4.65mm movement and a 8.24mm case, it sets two records for thinness. For those who don’t know about the history of Piaget and ultra-thin watches, if you click on the link in the previous paragraph you will find a brief summary.

Piaget do produce chronographs already of course, in the Polo and Gouverneur collections, but with its 4.65mm movement and its 8.24mm case, this 41mm sized newcomer to the Altiplano range is not just about breaking records, but also about providing options, especially for those who not only love a chronograph function, but would also like one that errs on the less-chunky side. 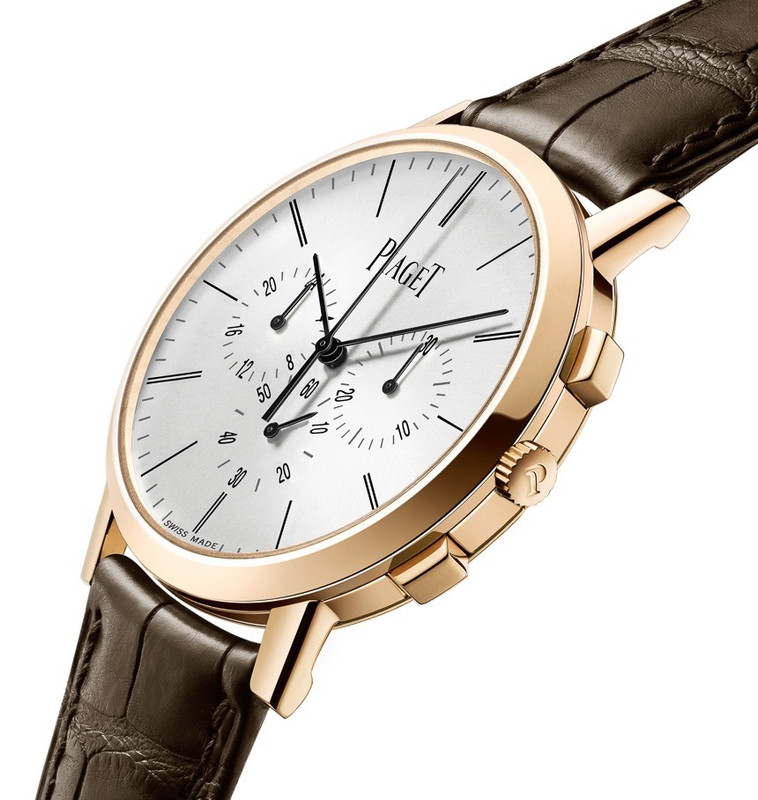 This new addition to the brand’s storied history of twenty-five ultra-thin movements and fourteen world records broken is called the new Calibre 883P. Taking two years of development, this new calibre is a manual-wind flyback chronograph, and is a relation to the automatic Calibre 880P movement, as the name hints at. It has a fifty-hour power reserve.

Functionally in terms of the chronograph, you can see a small sub-seconds at 6 o’clock, and a 30-minute counter at 3 o’clock. There is also a 24-hour dual-time indicator at 9 o’clock. Yes, it’s not just a chronograph that is the world’s thinnest and with the thinnest chronograph, but had a second-time zone option as well. 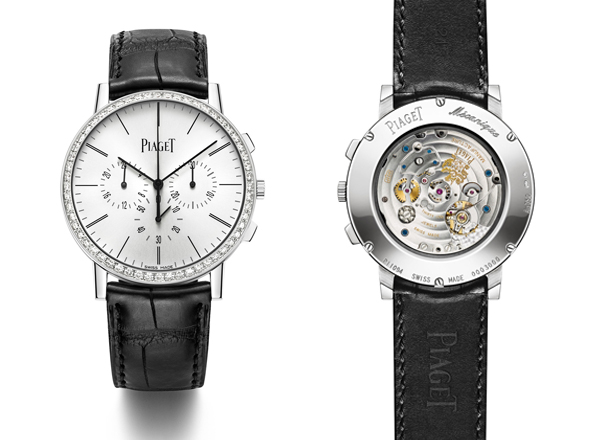 As mentioned, the chronograph is a flyback one, but it also a column-wheel chronograph with a vertical coupling-clutch, which can be seen through the open caseback. Also seen are circular Côtes de Genève, a circular-grained mainplate, bevelled bridges, sunburst wheels and blued screws.

In terms of the dial it features a sunburst satin-brushed finish, baton hands for that particularly Altiplano type of dressy elegance and, you may notice, the sub-dials are not recessed, which I’m guessing is all in the name of thinness. The 41mm case will come in either 18K pink gold or a an 18K white gold model, the latter with a fifty-six brilliant-cut diamond bezel of approximately 1.8 carats.