With eight new Aquatimers released at SIHH 2014, it was only natural for IWC to include, amongst these, a few special edition models commemorating their commitment to the Galapagos Islands and Charles Darwin Foundation.

An automatic (Cal.89365) flyback chronograph with a 68 hour power reserve in a 44mm case, this is IWC’s first foray into the bronze watch trend of recent years, most popularised by Panerai’s first ‘Bronzo’, as it is known. As is the case with other bronze watches, this will develop a patina in time, and with a water resistance of 300m, a bit of salt water will definitely add some personalisation and interest to the piece. 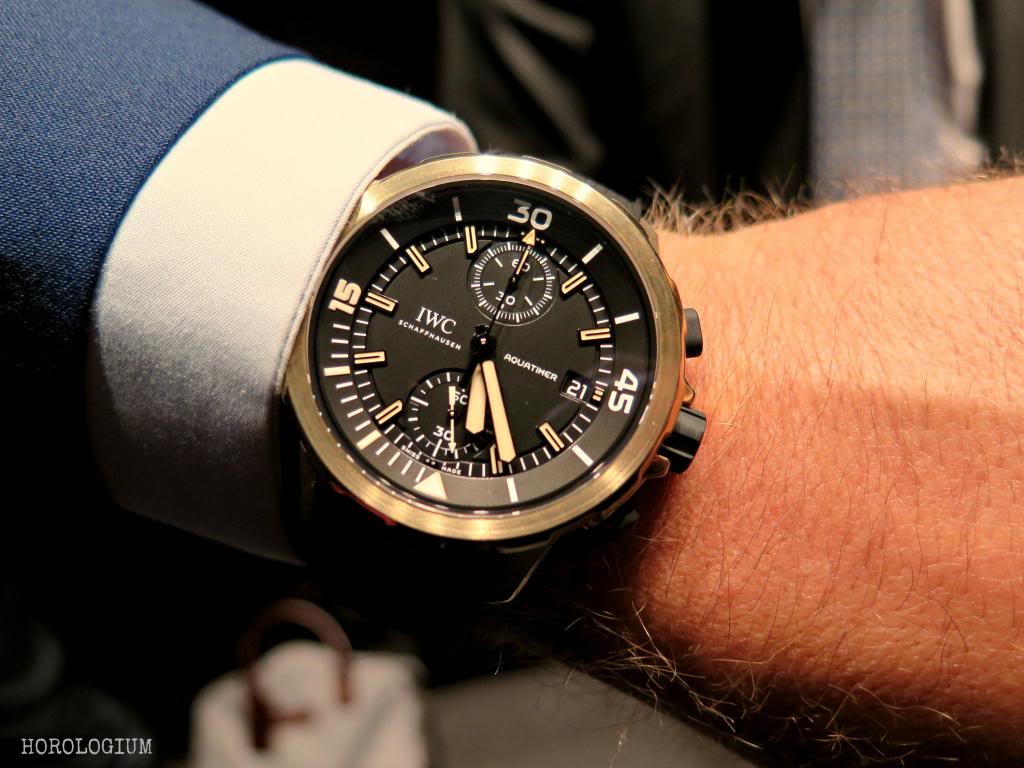 Created to mark Charles Darwin’s exploration of the Galapagos Islands in 1835, there is a portrait of Darwin etched in the caseback. As with all the others this new limited edition contains the new ‘Safe Dive’ internal/ external bezel system, which rotates in steps of one minute and is still controlled by an outside bezel via a sliding clutch system that connects the two bezel rings. For safety reasons the internal bezel only moves counter-clockwise. When you rotate the outside bezel counter-clockwise, the inside bezel moves counter-clockwise. However, when you rotate the outside bezel clockwise, the inside bezel does not move, which is a safety measure to make sure that the internal bezel cannot be moved backwards during a dive. 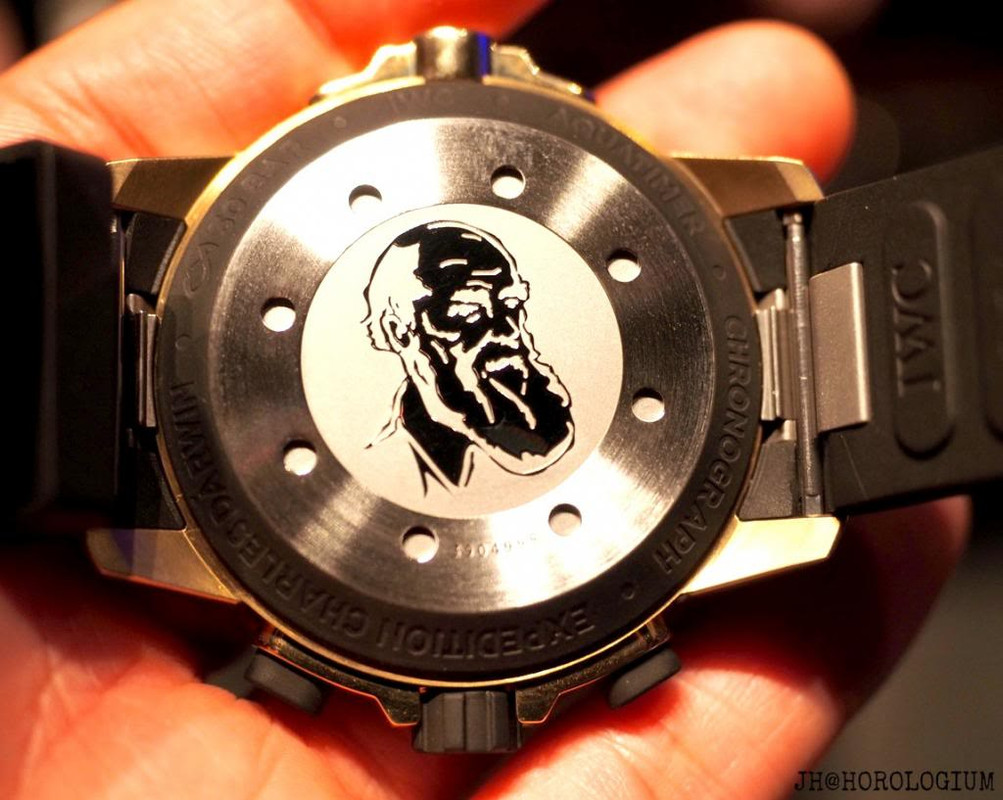 The Charles Darwin edition has lume on the hands and markers, a screw-down crown, anti-reflective sapphire glass and a comfortable rubber strap which makes the 17mm height seem a little less.

As is self-evident, this 44mm vulcanised rubber-coated stainless steel piece commemorates the fiftieth anniversary of the establishment of the Charles Darwin Foundation’s research station on the Island. 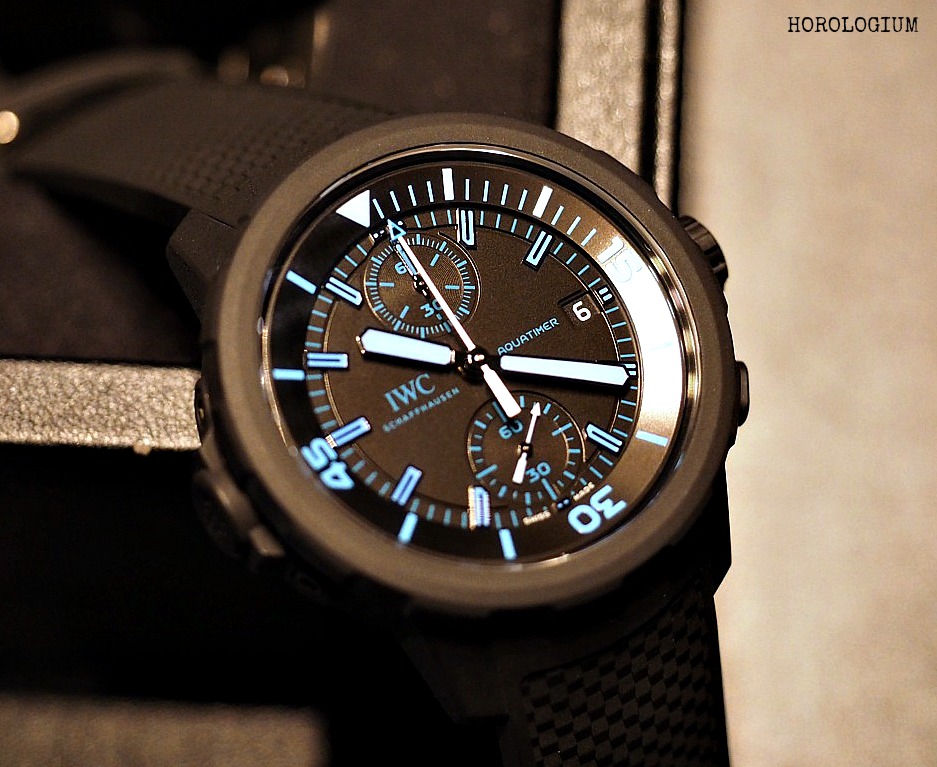 As per the previous Darwin model, it is a flyback chronograph using the Cal.89365 with the ‘Safe Dive’ bezel system and is water resistant to 300m. However, this watch is much more sporty and casual, with its ‘all black’ look and bright blue hands, numerals and indices, which are also lumed. 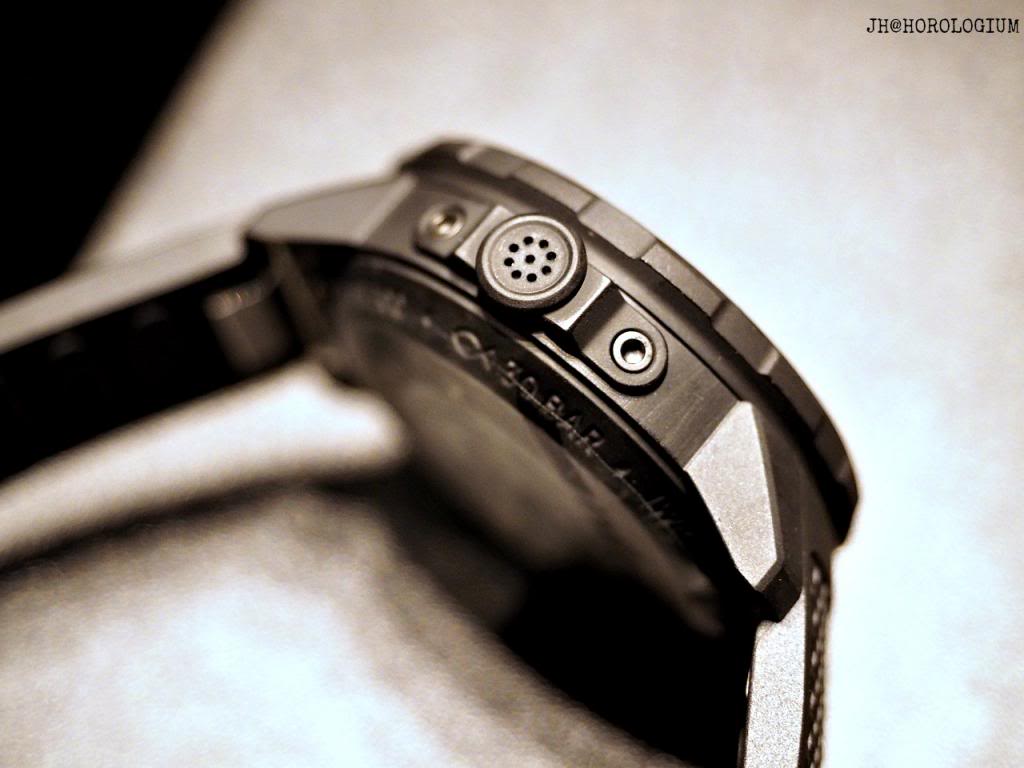 Amongst watch people there seem to be some ‘colour’ people, who have a fondness for particular colours – red, black, orange and blue being frontrunners. If you like a bright bold blue in your sports watch, you may like this one. It comes in a limited edition of 500 pieces. 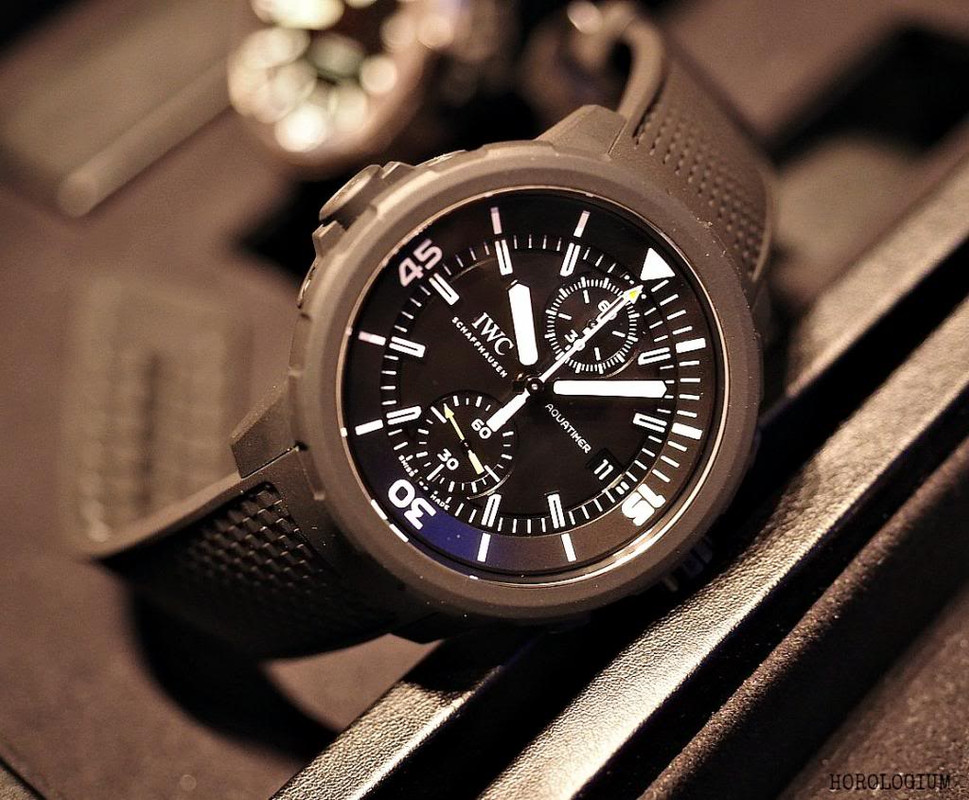 The 44mm case is also made from vulcanised rubber-coated stainless steel, as per the previous Galapagos model, and uses the same movement, but it’s all-black, and features an iguana on the caseback, a reference to the 1971 film ‘The Dragons of Galapago’, which covered Jacques Cousteau’s expedition to study the the Galapagos Islands to study this marine ignuas. This is the first time IWC have released two Galapagos models in the same year. 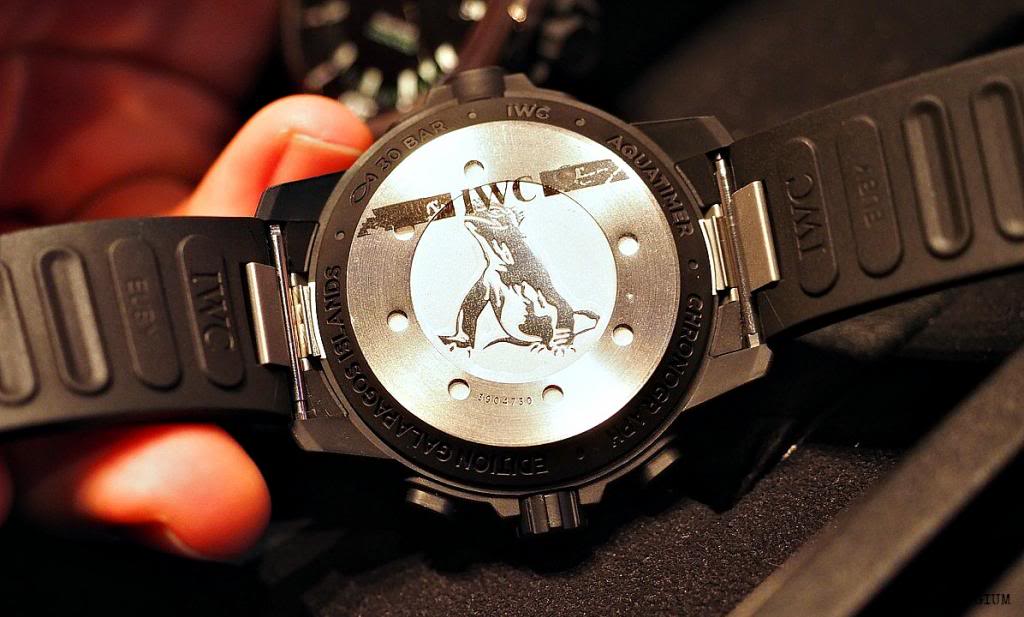 The final commemorative piece is not about the Charles Darwin Foundation, but also relates to IWC’s partnerships with conservation organisation. It was created in honour of Jacques-Yves Cousteau’s 1971 expedition to the Galapagos area, and features a portrait of him engraved on the caseback. The relationship between the Cousteau Society and IWC dates back to 2004, and this is the sixth commemorative watch released by IWC in his name. The stainless steel 44mm watch “Expedition Jacques-Yves Cousteau” has a blue dial and a portrait of him is engraved on the caseback. 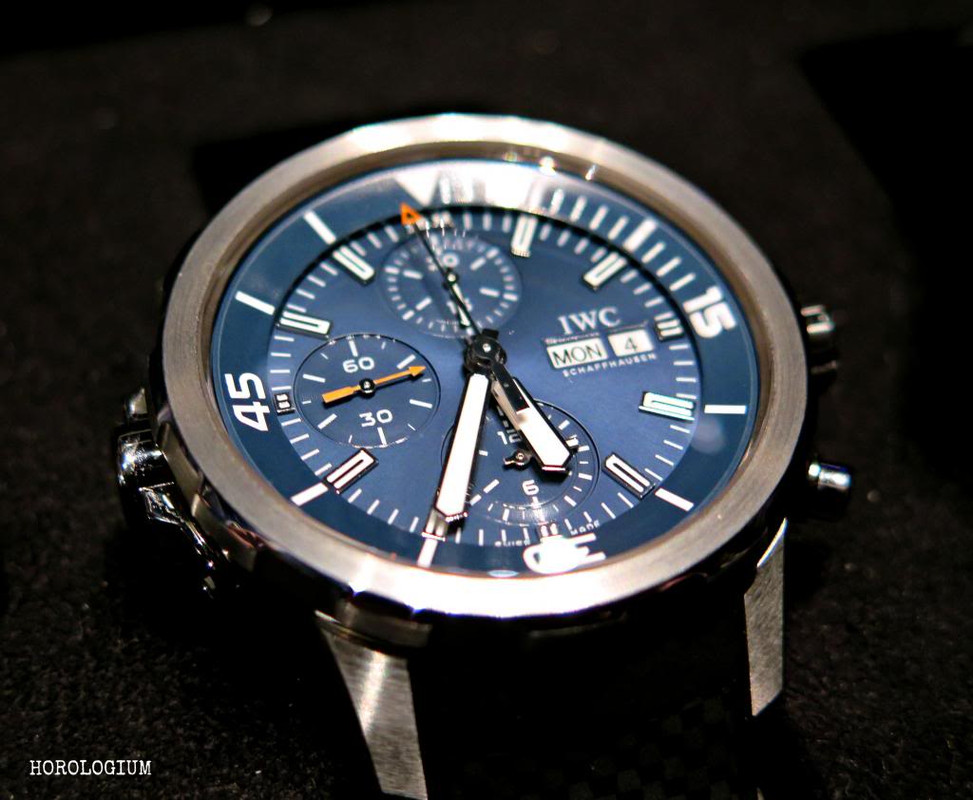 It contains the Calibre 79320 and is an automatic chronograph with a 44 hour power reserve. The bezels have the ‘Safe Dive’ system as per the previous models. Part of the proceeds from every sale goes directly to the Cousteau Society. 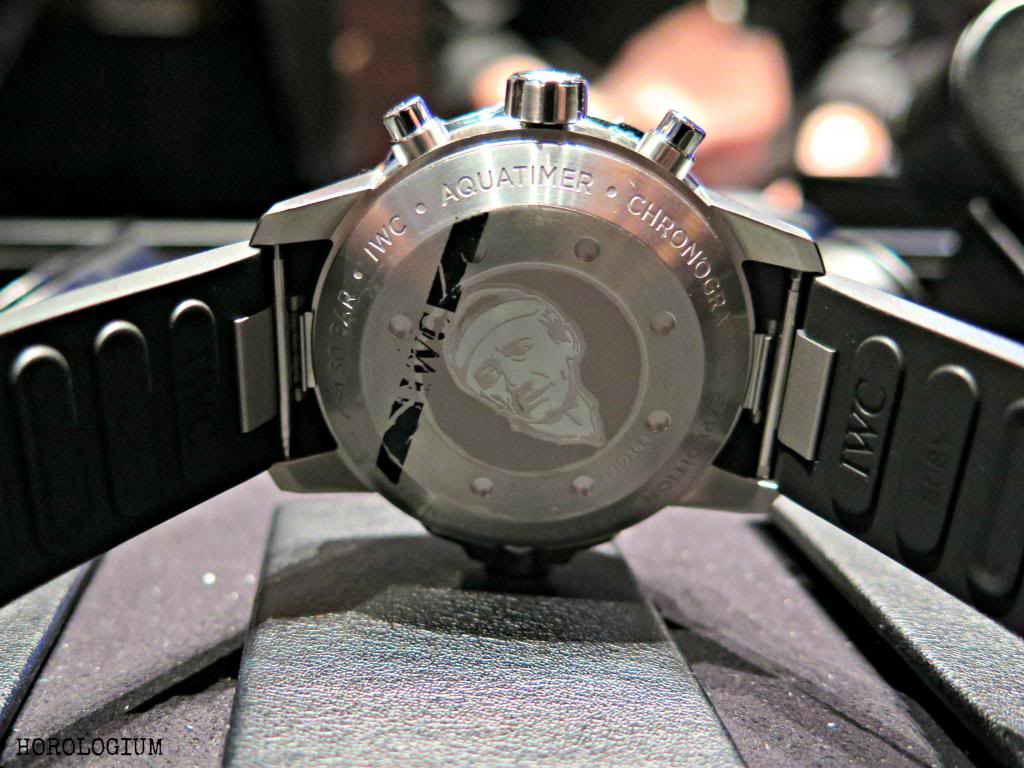 Part of the proceeds from sales of the Galapagos editions has traditionally gone to the Charles Darwin Foundation, whose goal it is to research and ensure the survival of, the indigenous flora and fauna of the Galapagos, a World Heritage site. For further information on their work, go to their website here.