Ulysse Nardin has launched a new interpretation of the Freak – the Freak S is a limited edition piece which continues their hands-free, dial-free and crown-free Freak with a double oscillator with differential in an automatic watch, made possible by their “Grinder” system.

They have gone with a ‘space’ analogy for this watch (a part of their broader ‘Earth. Moon. Sun’ theme). The speckled dial, a black aventurine plate scattered with gold particles, is called “Black Starry Night”.

As a flying carrousel, the Freak’s entire baguette movement makes a complete rotation in one hour. A broad arrow on the watch’s aventurine movement plate shows the hour while the longer nose cone of what they sort of referring to as ‘the rocket’ with the balance wheels and the escapement, indicates the minutes. The time is set by rotating the bezel in a clockwise or counterclockwise direction. 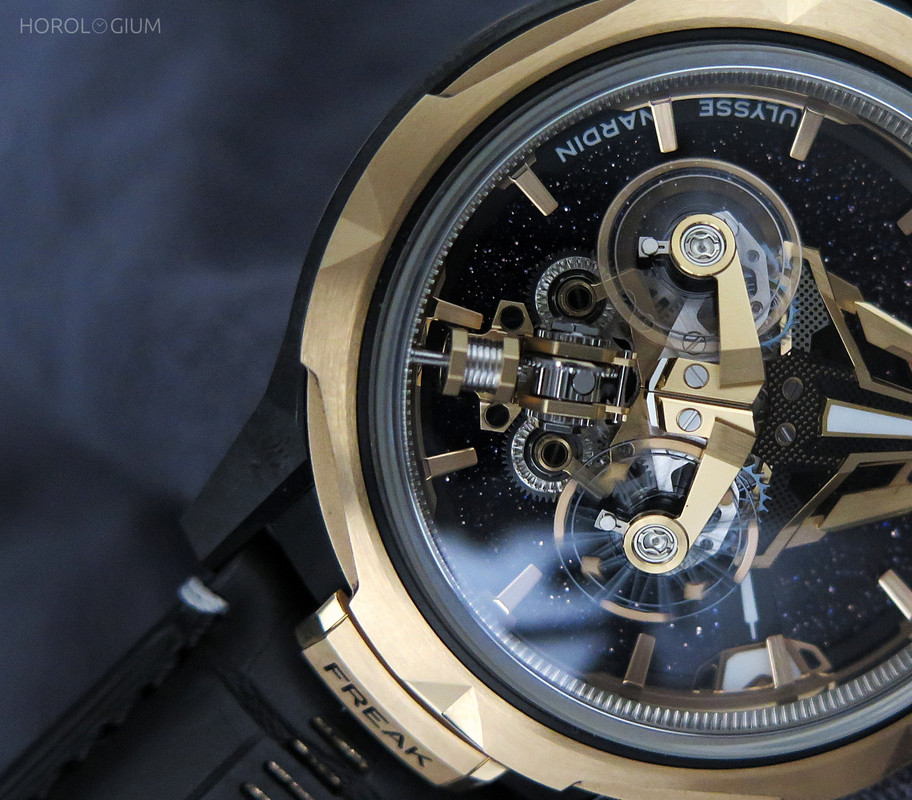 The new Freak S also marks an update to their Grinder automatic winding system that was used in the Freak Vision, which they say has been improved in this new model. By using wrist movements, the system operates using four blades that connect to the oscillating weight, which gives the self-winding system twice the angular stroke and limits friction.

Also, the Freak S marks the appearance of the first automatically wound double-oscillator calibre. The inclined double oscillator is a key component of the new in-house UN-251 movement. 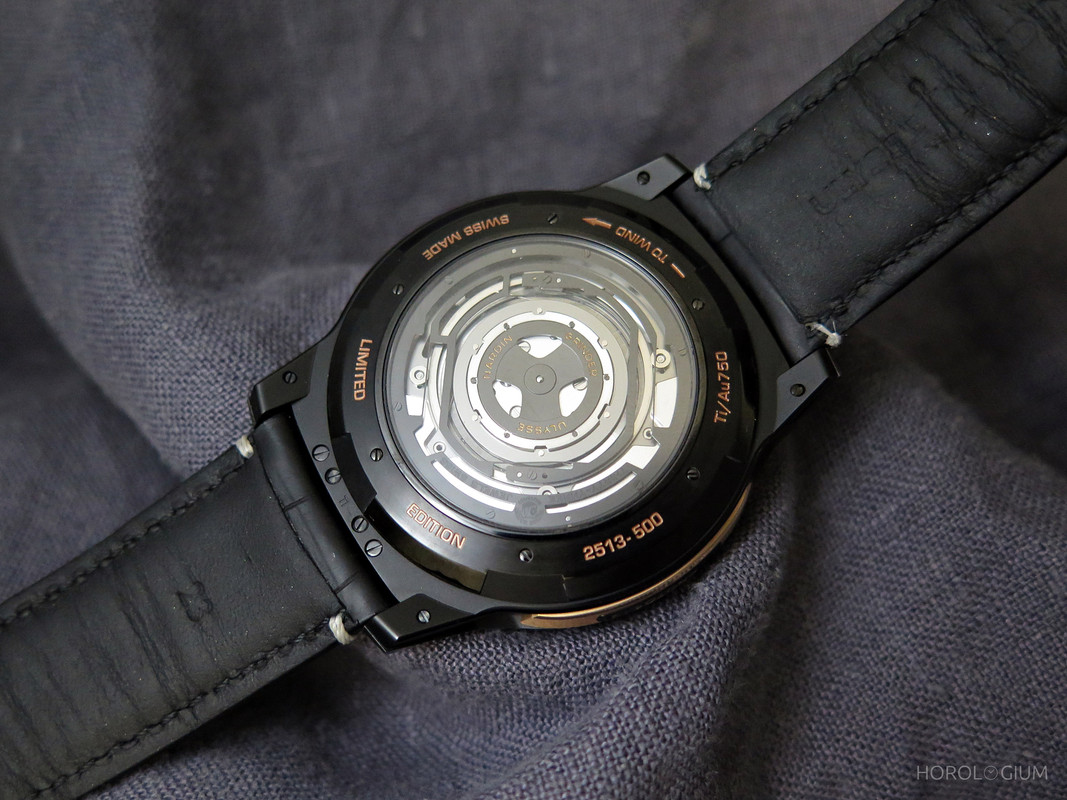 The blued “DiamonSIL” (diamond-coated silicon) double oscillator has each balance wheel inclined at a 20-degree angle and linked by a differential. The silicium components of the escapement of the Freak S are also coated with DiamonSIL.

Ulysse Nardin explains that the multi-gear differential, which links the two large inclined (20 degrees) silicon balance wheels, draws the average of their rates, evenly distributing the barrel’s energy to the two regulating organs, so that the amplitude remains stable. Again with the ‘rocket’ theme, they also refer to its visual effect, with the rose gold bridges holding the two, as reminiscent of a rocket wing. 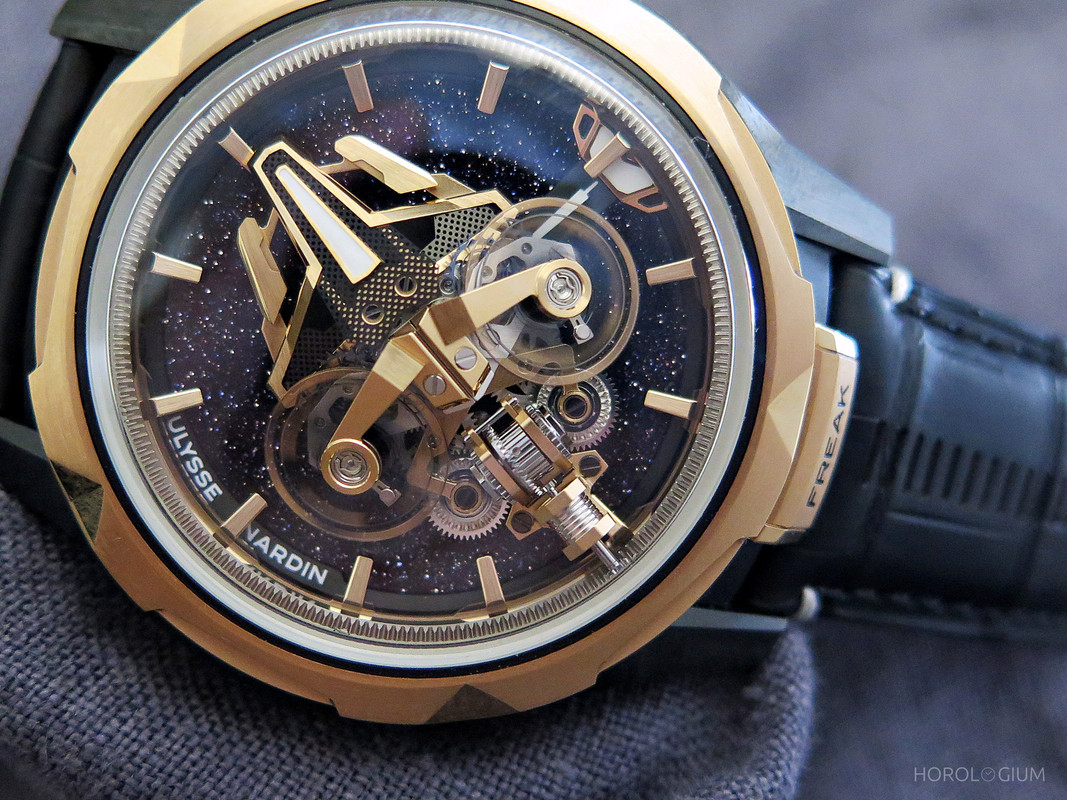 As for the rest of the watch, the 45mm case is rose gold, black ceramic and titanium. The case back is titanium with black DLC and you can see the ‘Grinder’ through the open case back.  As usual, the time is set with the front bezel, with a lever lock.  Manual winding is possible with the back bezel.

Ulysse Nardin will make the Freak S as a limited edition of seventy-five pieces, of which forty will be made this year. It comes on either a bi-material black alligator & gold calf strap or black alligator strap with a clasp in titanium with black DLC. It is priced at CHF 130,000.