HYT has had a bit of a time in the last couple of years, and its revival, as we mentioned a couple of months ago, has come with a number of new releases like the Hastroi Green Nebula and now, a more radically different addition to their collection, the Supernova Blue Moon Runner, which I had a chance to see in Geneva.

Moons and moon phases are one of the most popular horological complications, but perhaps it is not one that many predicted as one to be attempted by HYT with their mecafluidic time telling. 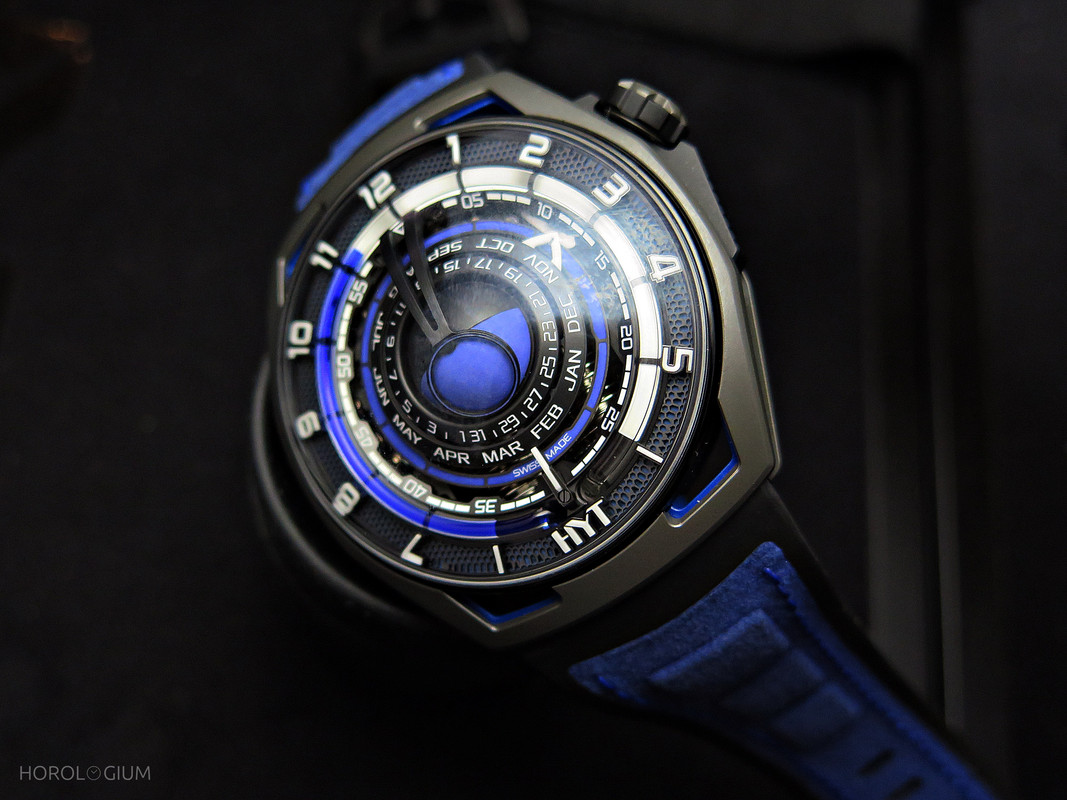 The HYT Supernova Moon Runner Blue designed by CEO and creative director Davide Cerrato, uses the same basic technology found in every HYT watch. The capillary tube contains two fluids, one colored and one clear, which are composed of substances that naturally repel each other and don’t mix, and which are propelled by a bellows system which moves the fluid around the tube. The expansion and contraction of the bellows are controlled by a cam and lever system. It takes twelve hours for the fluid to go around the dial once, at which point the two bellows are reset and the cycle continues anew.

To cope with temperature changes, one of the bellows has an internal thermal compensation system which expands or contracts as the temperature changes in order to maintain the correct fluid pressure and position of the boundary between the two fluids. 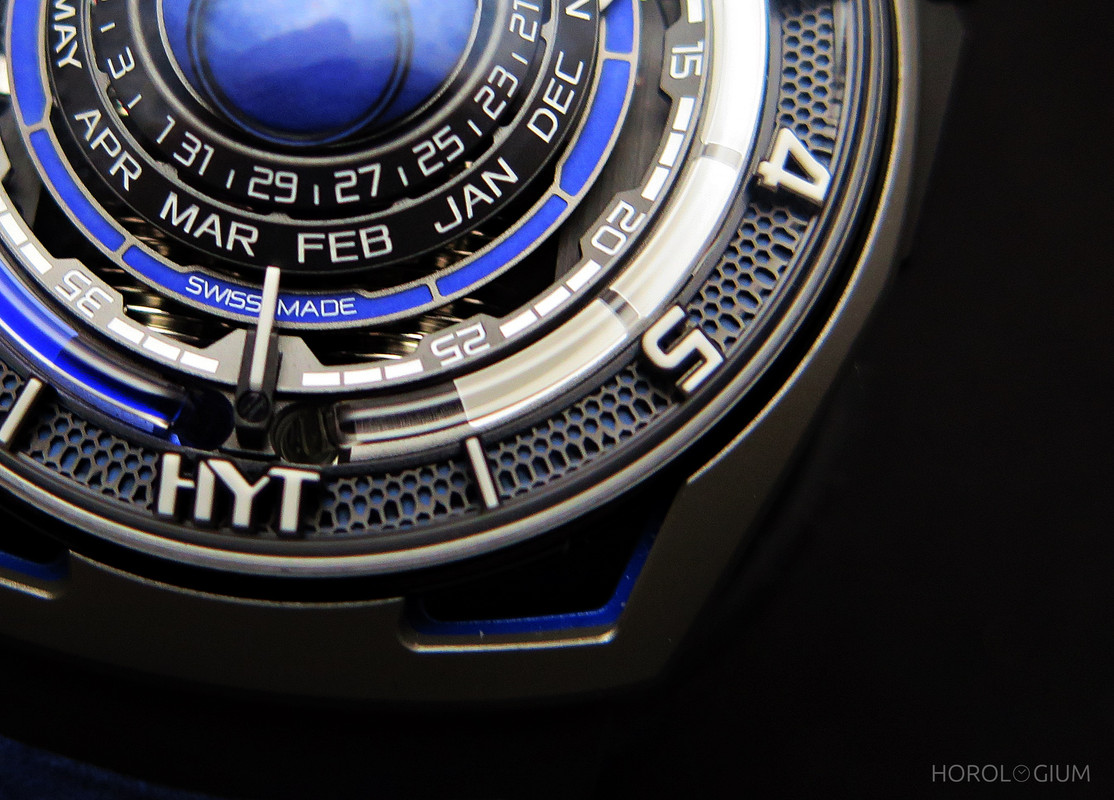 The minutes are read off an outer track on the inner flange of the dial. Two rotating discs that are concentrically around the centre moon phase display, allow the reading of the date and month via an indicator at six o’clock.

This watch is, though, all about the large moon phase display at the centre, which rises above the dial and is the undisputed visual focal point of this new model. What’s more, there is Super-LumiNova on the moon as well as on other parts of the watch. The moon, aperture and the curved supporting bridge are titanium. 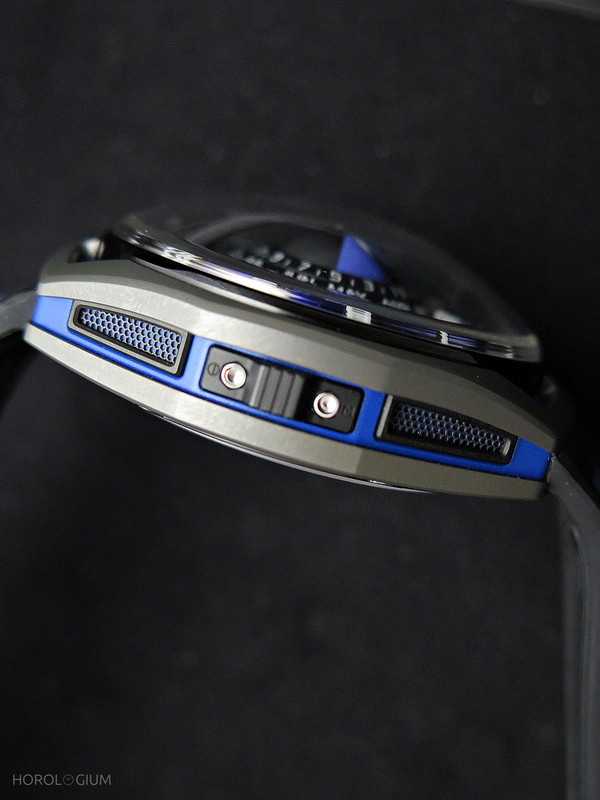 The HYT Supernova Blue Moon Runner is sand-blasted grey and blue-coloured titanium and has a diametre of 48mm and height of 13.3mm, topped with a domed sapphire crystal. Water resistance is 50m. It has a minimally open worked middle case as a part of its multi-layered case. Given the case material, to wear it is as light as you expect from an HYT made of titanium. 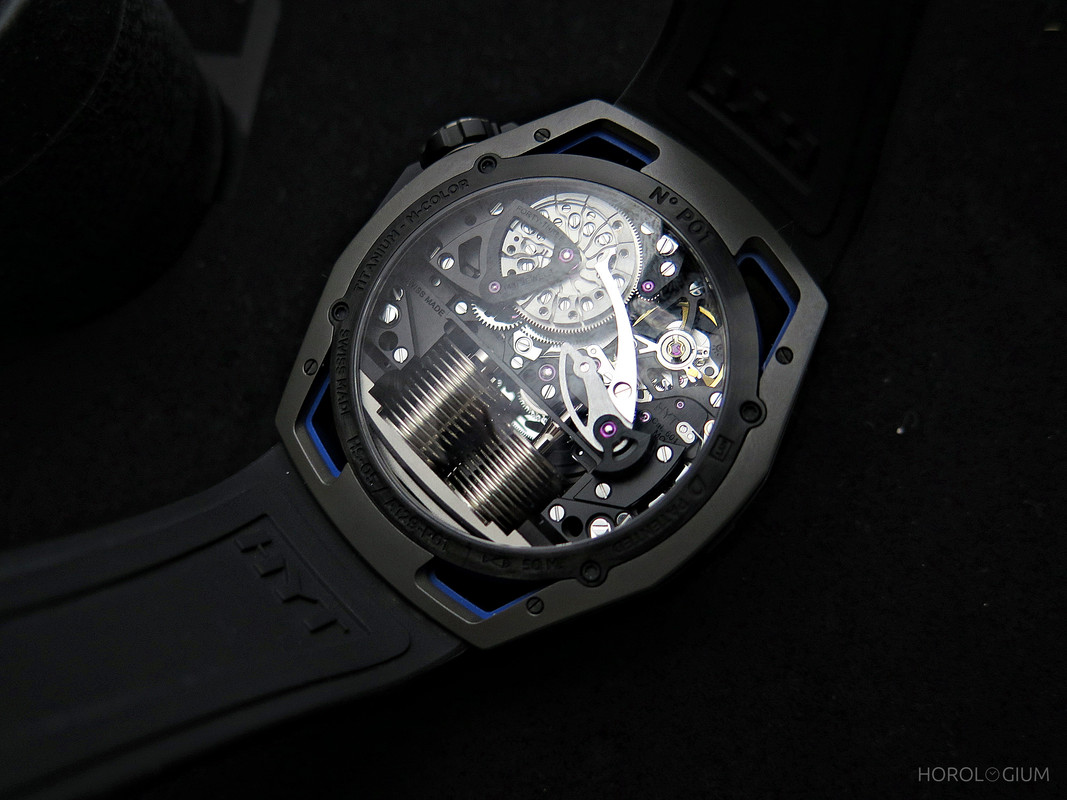 Powering this is the manually-wound Calibre 601-MO, running at 28,800 vph in 43 jewels with a 72-hour power reserve. It was designed by Eric Coudray, with PurTEC and Paul Clementi also involved. Finishing is a mix of satin, laser-treated, and bead-blasted.

Coming on a bi-material embossed strap of black rubber and alcantara blue with contrasting blue stitching and a black titanium clasp with glossy and sand-blasted finishing, the new Supernova Blue Moon Runner is priced at CHF 100,000 and in a limited edition of 27 pieces.