The new variant features a new titanium and steel 42mm x 51mm x 16mm case (water resistance is 30m), with finishing alternating between matte and glossy, sandblasted and polished. It is a hunter-style case and the cover is titanium. You can see the pushers labelled ‘PUSH’ that are used to release the cover. Opening it up reveals the power-reserve indicator and a small seconds in the form of a skeletonised silicon disc attached to a red anodised aluminium bridge.

The central body of the new Odyssey is titanium, with finishing a combination of satin-brushed, grooved, sandblasted and bead-blasted. A thin rod connects the body and head of the UR-112. This shaft is made from titanium and has double gearing (one at each end) to connect the display module, using gears that drive the hour and minute prisms via two gears. The shaft is perpendicular to the time indication.

The UR-112 Aggregat is part of the brand’s Special Project collection, with a digital jumping time display (hours, minutes and seconds) rather than the wandering hours that have formed the backbone of the brand’s collections.

At its time-telling heart is a set of black aluminium prisms that rotate from a central axis – the hour and the minutes are displayed on triangular prisms operating under transparent cylinders. The prisms have Super-LumiNova.

On the left is the digital hour display, with each of the twelve engraved numerals filled with Super-LumiNova. On the right is the same system for the ‘dragging’ minutes, which move in 5-minute increments. At 60 minutes, the hour jumps to the next one. 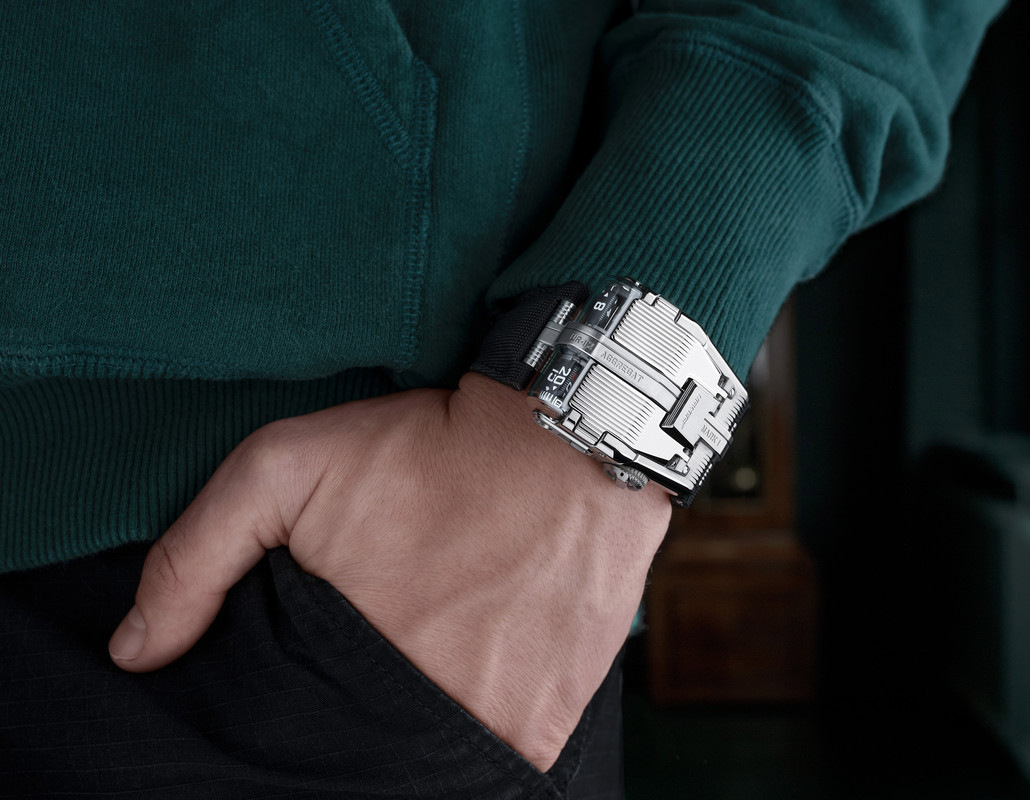 Powering it is the automatic Calibre UR-13.01, beating at 28,800VPH with a power reserve of 48 hours (for which the indication is situated on the dial side opposite the seconds).