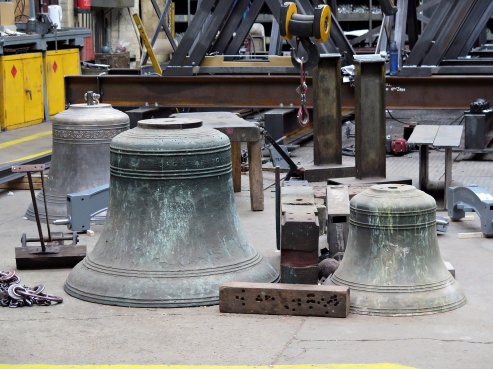 Renamed from the Clock Tower to Elizabeth Tower in 2012 to mark the Diamond Jubilee of Elizabeth II, the most well known clock in the world, its bells and the tower in which it resides, are simply known as Big Ben.

Its construction was commissioned during the rebuilding of the Palace of Westminster in the wake of the 1834 fire. Parliament determined that the new buildings should incorporate a clock tower, a bill was passed to that effect in 1844, and a commission established.

The specifications were drafted by Astronomer Royal George Airy that “the first stroke of the hour bell should register the time, correct to within one second per day, and furthermore that it should telegraph its performance twice a day to Greenwich Observatory, where a record would be kept.”

It was completed in 1854, but construction on the tower was not finished until 1859.

When completed, the clock was the largest and most accurate four-faced striking and chiming clock in the world. Dials of the clock are 22.5ft/ 6.9m in diametre. The Big Ben bell is the largest of the clock’s bells and weighs 13.7 tonnes.

On 21 August 2017 the much-needed renovation works began on all aspects of the tower, including on the clock dials and movement, with the completion date in 2022.

So – who has been restoring the clock, and where?

None other than the Cumbria Clock Company, which has been working in tight secrecy at their home in the Lake District.

If you don’t follow Keith Scobie-Youngs of the Cumbria Clock Company on Twitter, where he has been sharing some tidbits in recent days, click on this article and interview about the just-completed restoration, the local ‘security guards’, and for some interesting and charming facts and trivia about the immense job that they have been undertaking.

The fruits of their labour are headed back to London for reassembly in the Elizabeth Tower, after which the bells will have to be re-installed and tested before the clock and bells chime once more.

The Whitechapel Bell Foundry closed in June 2017. You can read about it (and the fight for its survival) at Spitalfields Life, which has been one of its most dedicated advocates. It was my good fortune to go on a tour of the foundry with #thewatchnerd in 2015 (during which the photo was taken). Its loss and the building’s future as a ‘bell-themed hotel’ is, unfortunately, a far cry from its history.