A recent new release from A. Lange & Söhne may have slipped under the radar for some, as it is of a new special edition of a model that does not get as much publicity as its siblings

Meet the new limited edition Cabaret Tourbillon Handwerkskunst, which brings this stop-seconds tourbillon watch, launched in 2008, into the Handwerkskunst realm. It is the seventh model to join this special decorative series and features a number of different arts including enamelling and hand engraving work.

When it was introduced, the Cabaret Tourbillon put, for the first time, the ability to stop the oscillating balance within the tourbillon cage to the exact second. By pulling the crown out, a lever is activated that pivots a v-shaped spring into the balance wheel rim. This stops it instantaneously. Restarting is via depressing the crown.

The in-house three-part dial is made of solid white gold. The inner section with the Lange outsize date is manually engraved with a lozenge pattern, a design pattern mirrored in the six lozenge-shaped gold hour markers. The dial is coated with semi-transparent enamel.

This lozenge motif also finds its way to the black rhodium-treated engravings on intermediate wheel cocks, visible on the back side. 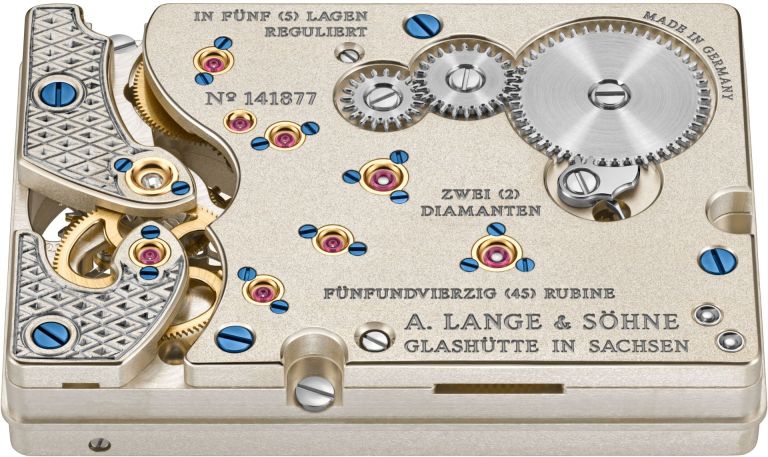 The sub dials for the small seconds and the power reserve indicator are rhodium-coloured gold, and the hands are made from rhodiumed gold. The 60-second tourbillon has a matte-finished bridge featuring black polishing.

Flipping to the back, the train-wheel bridge is untreated German silver and has a granular surface inspired by the movements of vintage pocket watches. The engraved inscriptions on the plate are black-rhodiumed and the limitation number xx/30 is engraved on the case.

The new Tourbillon Handwerkskunst comes on a black leather strap with grey stitching and a platinum deployant buckle.