This year’s Cloche de Cartier is the latest in the Cartier Privé Collection, following the Crash, Tank Cintrée, Tonneau, and Tank Asymétrique. Since 2017, Privé has been the space through which Cartier has revisited and revived some of its most significant historical designs.

The entire collection has its roots in the Collection Privée Cartier Paris (CPCP). Running between 1998 and 2008, it was a series of re-releases of legendary historical models that used movements from outside Cartier but decorated by them, some visible through open case backs. Most were limited to just 100 pieces. When the CPCP series was finished, the Fine Watchmaking Collection was launched.

The cloche shape first appeared in Cartier pieces in 1920. The “Cloche de Cartier” name was chosen because when when oriented horizontally, its outline was like a bell. This first Cloche was a diamond and onyx brooch watch. The case shape’s inaugural appearance in wristwatch form was in the following year, courtesy of a platinum and diamond number, followed by the first Cloche de Cartier wristwatch in yellow gold with a leather strap in 1922.

Since then it has occasionally appeared in various guises, and even with quartz movements, although mechanical has been dominant. 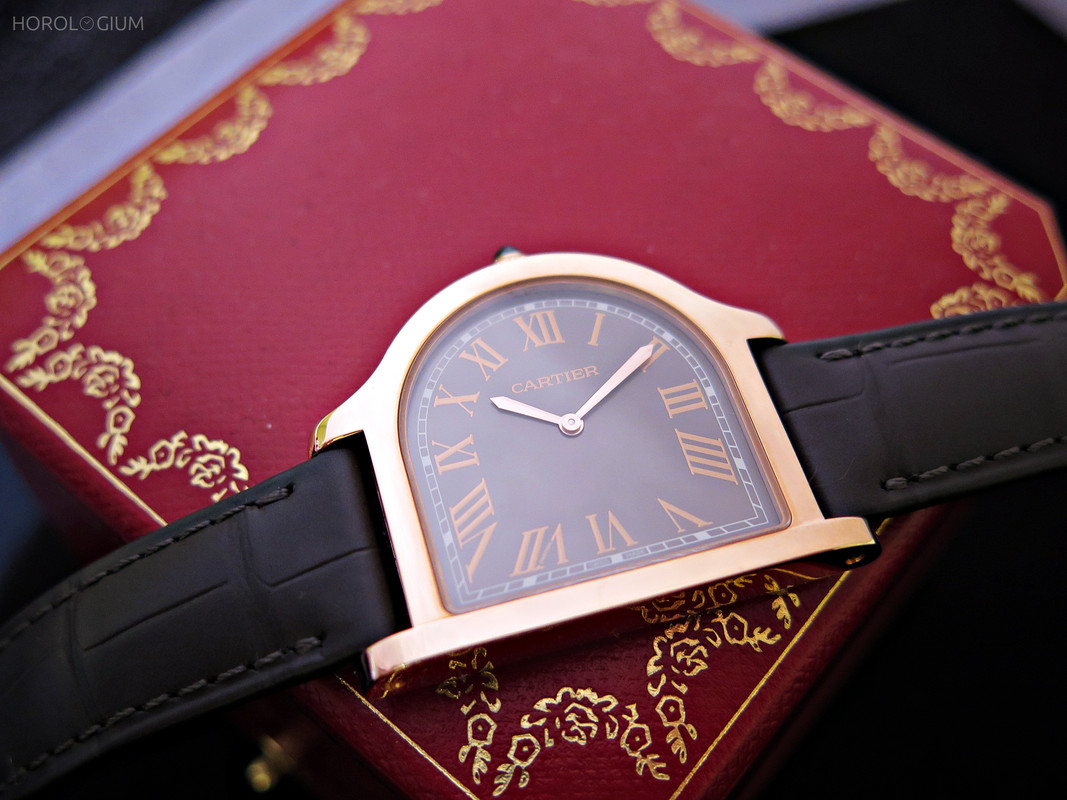 Firstly, let’s go through the specs.

The case is 37.15mm x 28.75mm. It is pure Cartier, featuring a ‘rail track’, sword-shaped hands, and the crown set with a cabochon. The Cloche has stayed faithful to the original model in terms of finishing – satin-finished on the back, polished between the lugs or edges. Inside is the manually-wound Calibre 1917 MC which beats at 21,600 VPH and has a power reserve of 38 hours. 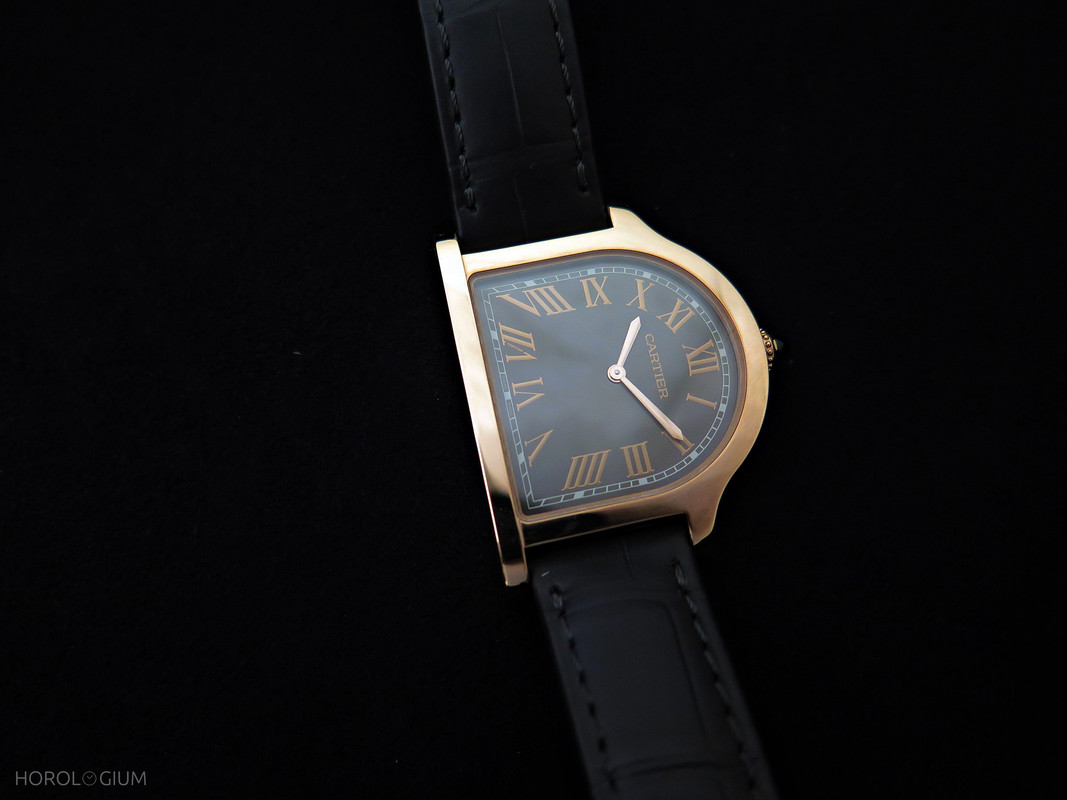 When I saw the photos on its release, and bearing mind that I had not ‘met’ a Cloche before, I didn’t have any strong thoughts about it either way, so it was good to be able to handle and try one on, to see whether I would remain somewhat non-committal, or actually come to any firm views. 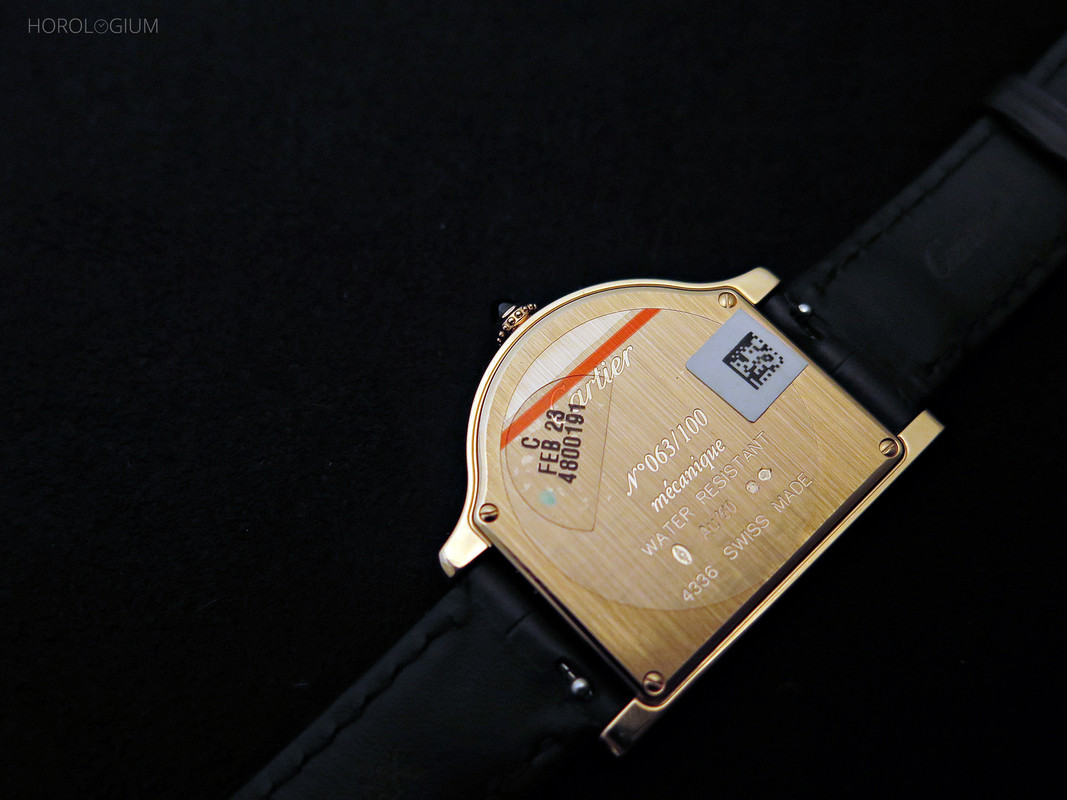 It is a slim dress watch of a size that is in that comfort zone which makes it suitable for a wide range of wrists, and sits snugly. This particular combination of pink gold and a dark anthracite dial is one that pops up now and then in dress watches, and for the Cloche, it really works. As I wore it, and in thinking about it compared to the other two variants, I came to the conclusion that although the other two have a deep classicism to them, this one has more of a feeling of modernity, which is fitting given the original design’s unconventional nature. The pink gold may make it look the most ‘dressy’ of the three, but for me this was a strength.

One thing that I had not expected to happen was that the longer I had it on my wrist, the more I was taken with it.