The launch collection consists of four pieces – two time-only models (one automatic, the other quartz), a limited edition GMT, and a quartz model targeted at women. The watches all feature the official Marine nationale blue and their logo at 6 o’clock, and the crown is decorated with their crest as well. They will come in a Marine nationale travel box and some include an additional official Marine Nationale Nageur de Combat style parachute elastic strap. The Navygraf Marine nationale GMT Limited Edition (1,000 pieces) comes in a 39mm brushed stainless steel case with a thickness of 12.85mm and water resistance of 300m. It has a sapphire crystal and unidirectional diving bezel. 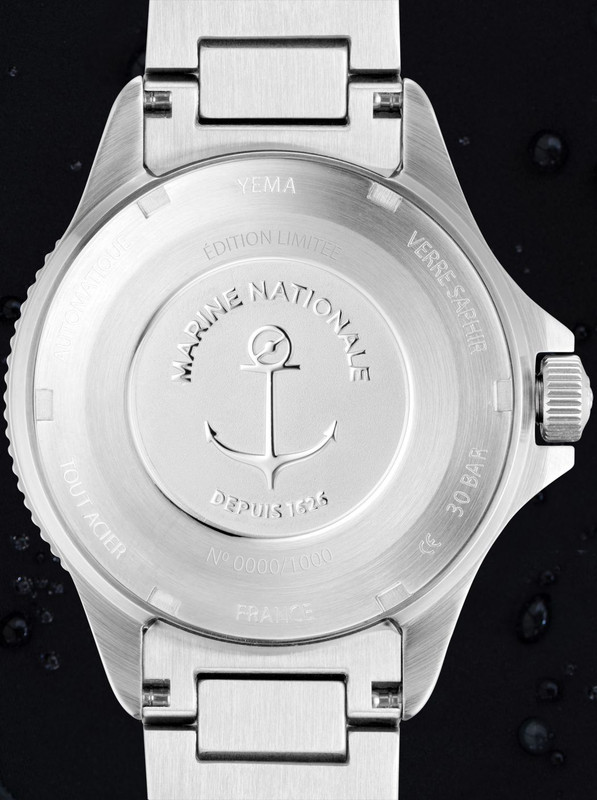 Under the sapphire crystal is a matte blue dial. The printed ‘exclamation mark’ markers (a historical reference to 1970s Navygrafs) and polished stainless steel hands both have Super-LumiNova. There is a sapphire bi-directional diving bezel with a 24-hour GMT markings. There is a lumed triangle marker at 12 o’clock. The case back is embossed with the Marine nationale crest and engraved with the limitation number xxxx/1000. Underneath it is the new in-house automatic YEMA Calibre 3000 with a GMT complication which beats at 28,800 VPH and has a power reserve of 42 hours. 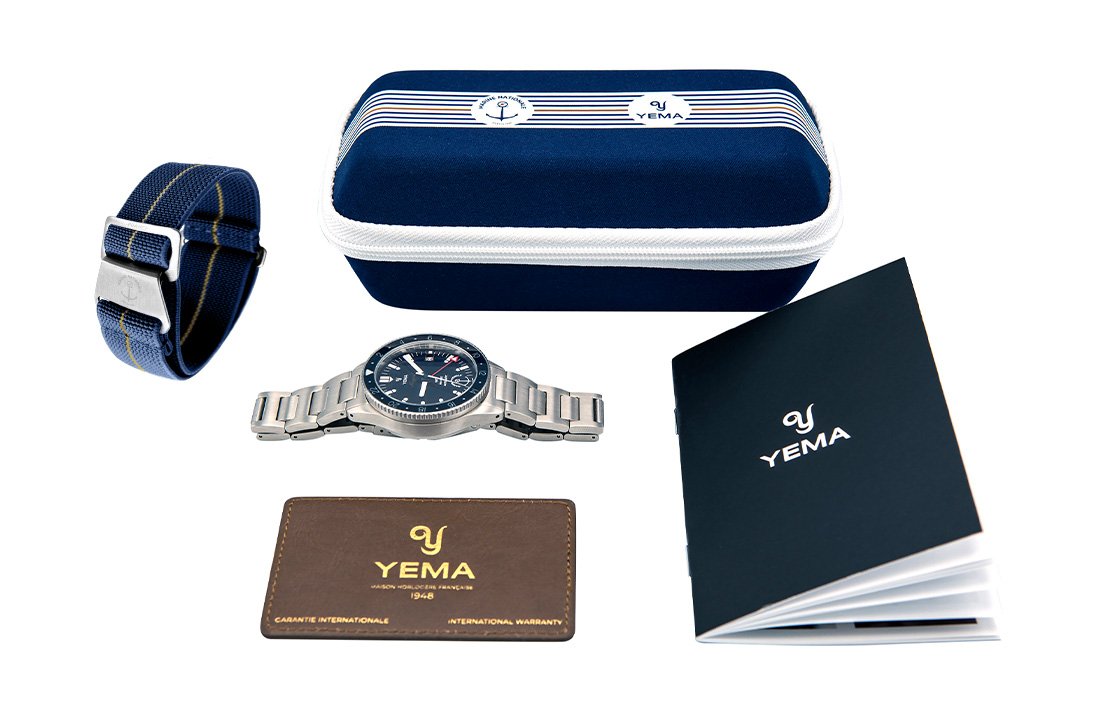 It comes on a brushed stainless steel bracelet which has a clasp with a diver’s extension, and the additional Nageur de Combat style strap. Priority is being given to those in the Marine nationale, but it is possible to reserve a preferred number (subject to availability). Next up, the Marine nationale Automatic also comes in a 39mm brushed stainless steel case, with a thickness of 12.15mm and water resistance of 300m. Its matte blue dial has no date window (which is great) and features the same printed markers and polished stainless steel hands with Super-LumiNova. The sapphire unidirectional diving bezel has 0 – 60 minute markers and there is a triangular marker at 12 o’clock that is lumed. 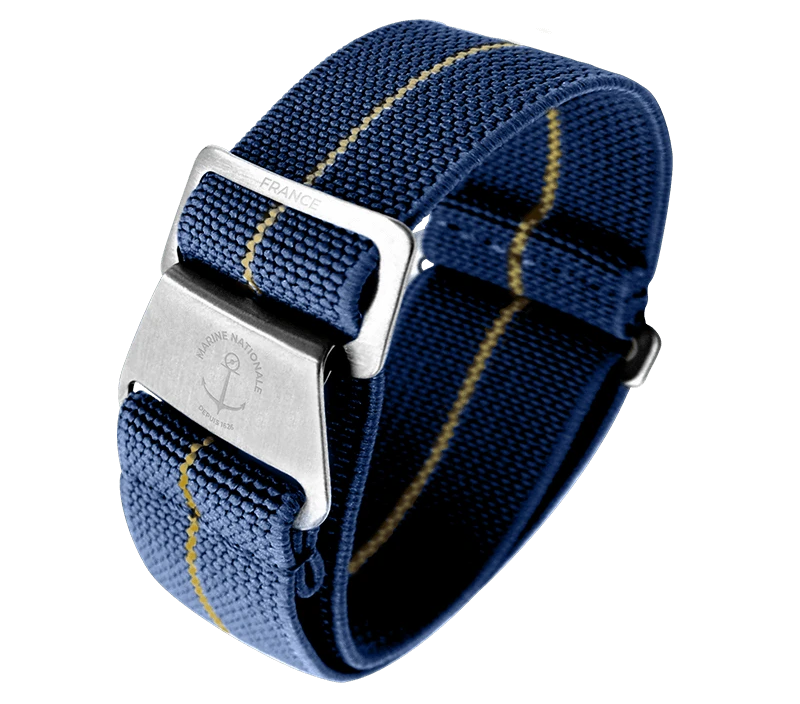 The case back is also embossed with the Marine nationale crest, and it is powered by the automatic YEMA Calibre 2000 which beats at 28,800 VPH and has a power reserve of 42 hours. It comes on a brushed stainless steel bracelet with a diver’s extension and with a Nageur de Combat strap. The third new model is the Navygraf Marine nationale Quartz. Its 39mm stainless steel case has a thickness of 11mm and a water resistance of 200m. Inside is the Ronda 503.2 FE movement. One other point of difference with the Quartz model is that atop the blue dial with the same markings, logo and use of Super-LumiNova (but with the obvious absence of ‘Automatic’) is the use of mineral crystal. It may be a less expensive model, but it also comes with the same bonus Nageur de Combat strap and of course the crest is on the case back. Finally, we have the Marine nationale Navygraf Femme, which is in a 34mm-sized stainless steel case with a noticeably lower water resistance of 100m. This is noteworthy for being the first official women’s military watch in the history of the Marine Nationale, so it’s a shame that the water resistance could not have also been 200m. Beneath the K1 mineral crystal is a matte blue dial with the same the gold Navygraf, and logo. On the case back is the official Marine nationale crest, beneath which is the quartz Ronda 763E movement. It comes on a mesh bracelet and with an additional white calf strap, also affirming that it is clearly not in the dive watch category. They are available directly from YEMA at their site and the prices are as follows:

Rather unexpectedly, given that they have only just been released, you can also buy them at a discounted price at the Marine nationale’s official site here.

In other watch brand and Marine nationale-related news, Tudor announced an official partnership with them, their first official partnership since the 1980s. Their relationship started in 1956 when the Toulon-based Underwater Study and Research Group (Groupement d’Etude et de Recherches Sous-marines aka G.E.R.S.) received both reference 7922 and 7923 Submariners for assessment and feedback.

Following this, in 1958 the updated Reference 7924, with a new case, oversized crown (hence the nickname ‘Big Crown’) and 200m water resistance was sent to the MN. The 7924 had a winding crown that was vulnerable to damage whilst underwater. To address this, Tudor developed the Reference 7928, the first Tudor Submariner with (square) crown guards on either side. It was produced for almost a decade, during which it was slightly modified in case and dial design. The crown guards went from square to pointed to rounded.

In the late 1960s Tudor unveiled a new dial and hand layout – what is now commonly called the ‘Snowflake’ watches, first issued in 1974, and officially used until 1983. Tudor ceased issuing the snowflake hands circa 1980, going back to the mercedes hands. The Marine nationale ordered Submariners from Tudor until the early/ mid 1980s. It will be interesting to see what the fruits of this relationship will be.