At SIHH 2015 Montblanc launched the red gold limited edition Tourbillon Cylindrique Geosphères. At Watches & Wonders 2015 in Hong Kong, they launched another limited edition version but this time in white gold. A version that to my mind, is even better looking that its predecessor.

One of the reasons for this is the upper part of the dial, with a very elegant dark sparkle of an Aventurine background to the cylindrique tourbillon. It is this effect that is the reason for the ‘Night Sky’ name for this new watch.

As you can see, the dial is multi-layered. Against the backdrop of the Aventurine sky sits the one-minute tourbillon with its distinctive infinity-loop bridge; it takes a watchmaker seven days to complete this alone. 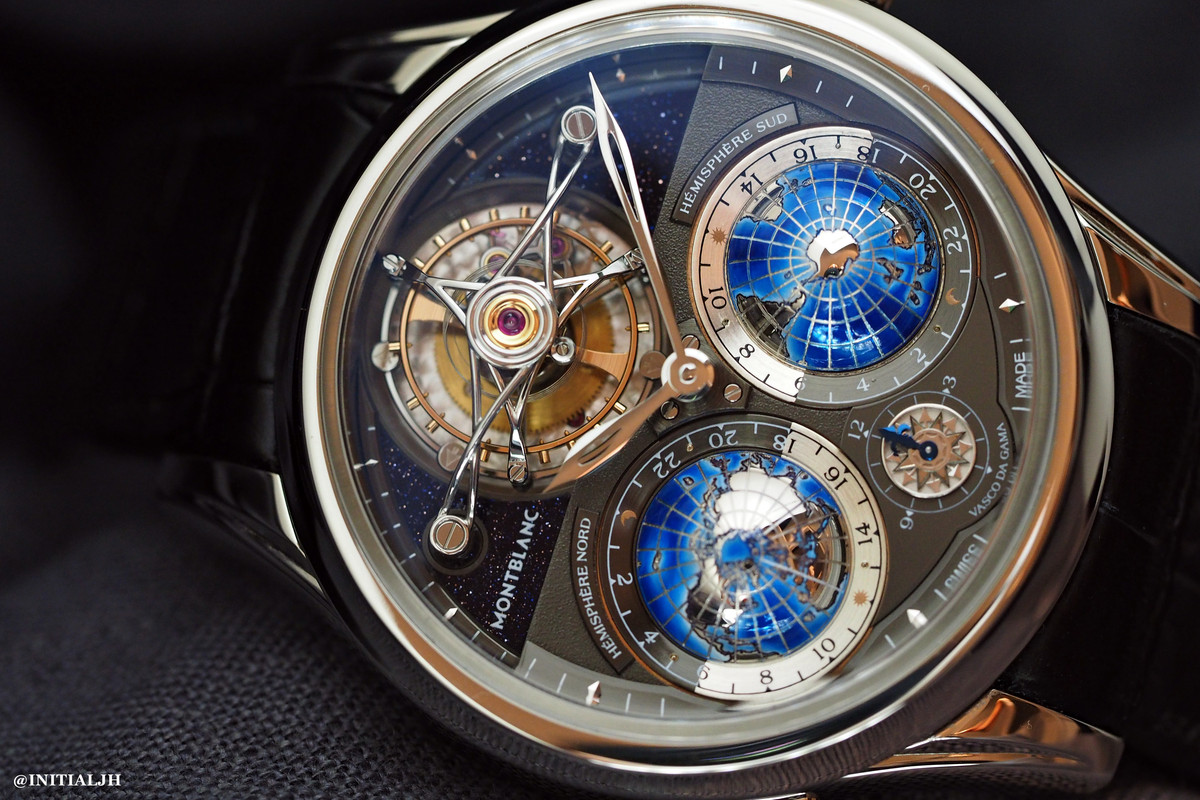 The lower part of the dial is a dark grey, with two hand-painted fixed globes to illustrate each hemisphere (with day/ night indications and twenty-four time zones) and a home-time indication in the form of a three-dimensional compass rose. The indicator on this compass marks the hours, and is shaped like a fleur-de-lys. 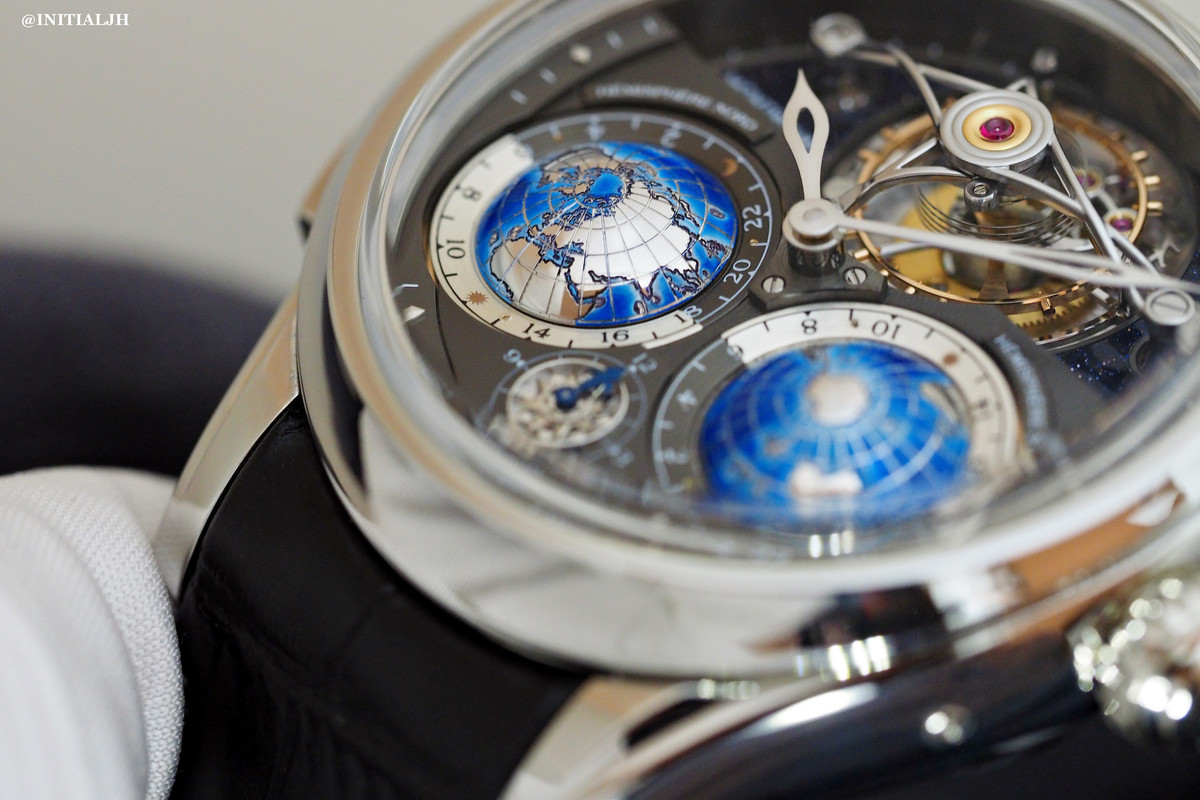 Two synchronised discs with 24 time zones and day/ night indicator make one revolution per day around the two fixed globes; the one for the Northern Hemisphere turns clockwise and the Southern Hemisphere, anti-clockwise, letting the wearer view the current time in any part of the world. Without losing the minutes the local time can be adjusted with a pusher at 8 o’clock. 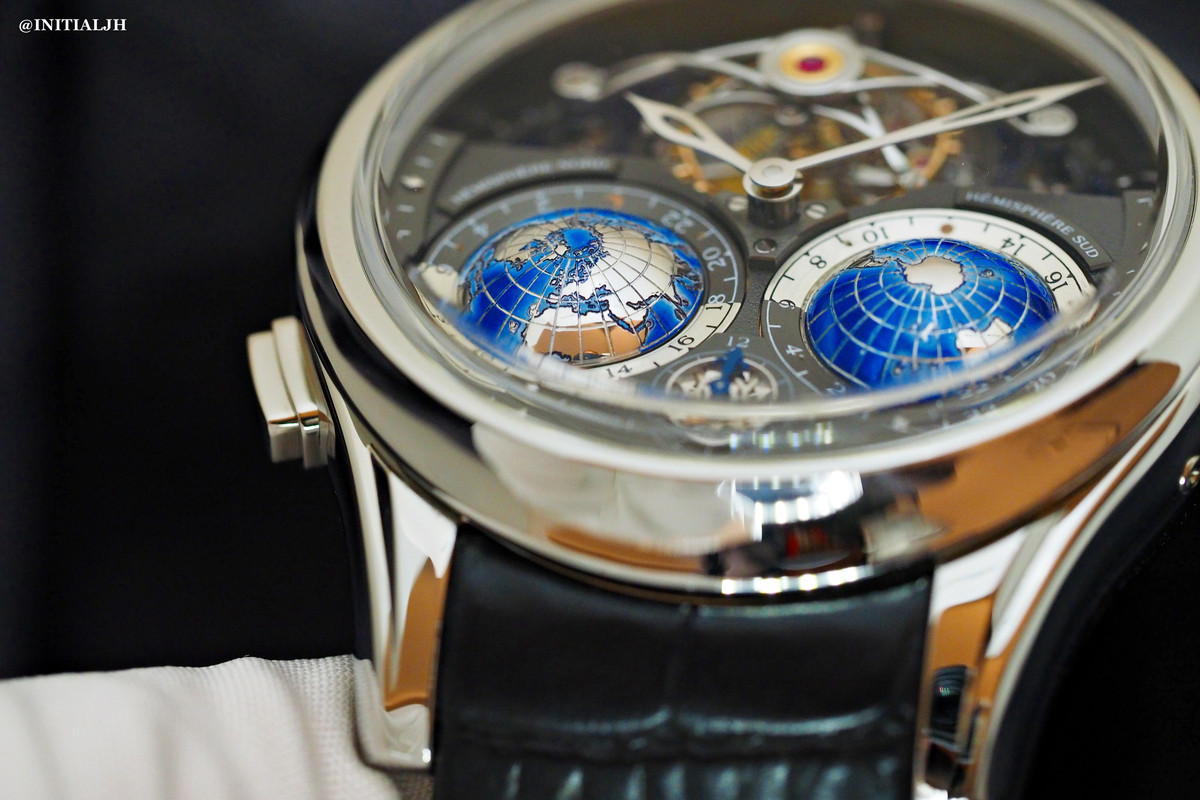 So how do you actually use these time zone functions? Well pulling the crown out lets you set all three – local time, home time and the world-time for the two hemispheres. At 4:30 on the side of the case you will find the small corrector for the home time compass rose at 6 o’clock. Once all these have been set, a new local time in a different time zone can be set simply by pressing the pusher at 8 o’clock, which advances the hour hand in hourly increments without affecting the minutes, nor does it alter the home time at 6 o’clock or the two displays along the globes. 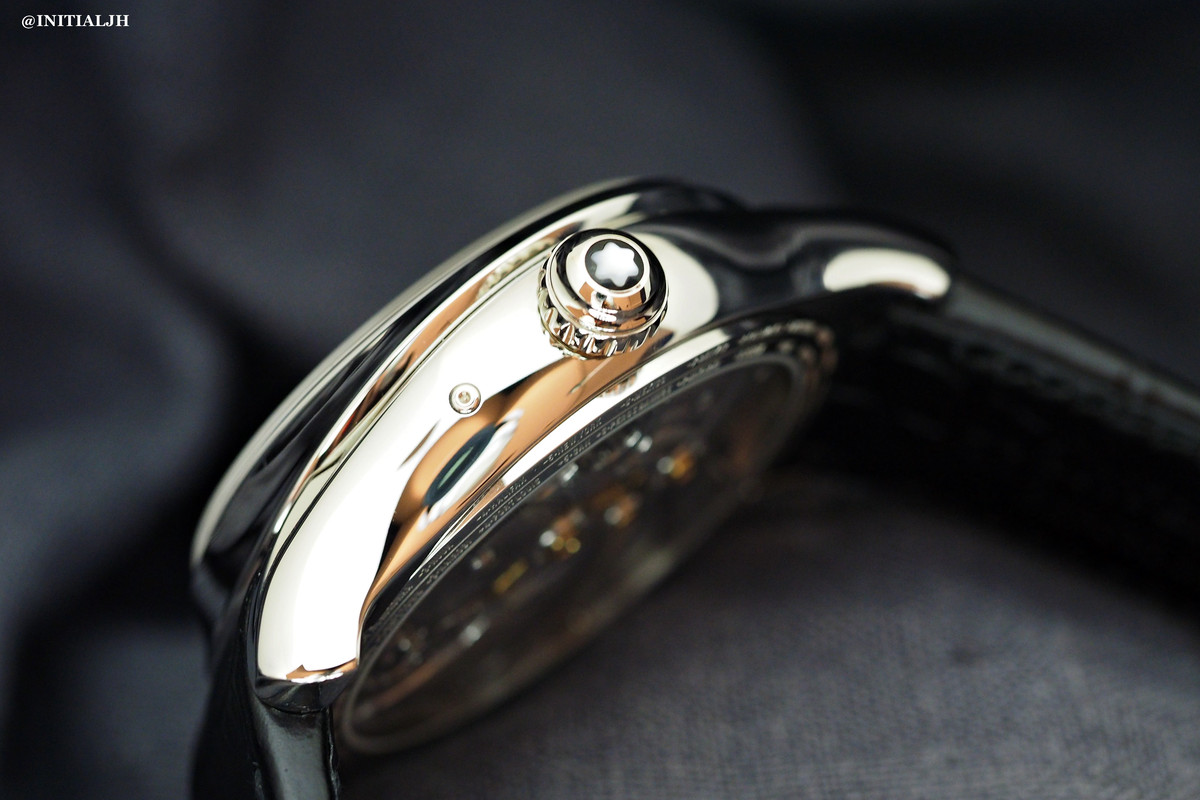 The continually running and independently adjustable display for the home time at 6 o’clock is inspired by a marble compass rose at the base of the remarkable Padrão dos Descobrimentos monument in Belém, Portugal that commemorates renowned Portuguese explorers. I visited this monument a couple of years ago, and in a spot of happy coincidence for this post, took a photo of this very compass rose (see below), along with photos of the Padrão dos Descobrimentos. 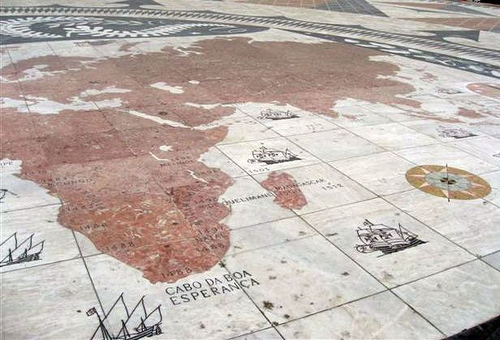 Vasco da Gama, perhaps the most famous Portuguese explorer of them all, set sail from Lisbon’s Restelo harbour on 8 July 1497 with a fleet of four ships, with the goal of reaching the coast of India and in so doing, become the first to go by a southern sea route to India. This successful expedition, and those subsequent to this, have formed the basis for the Vasco da Gama commemorative pieces released by Montblanc this year. 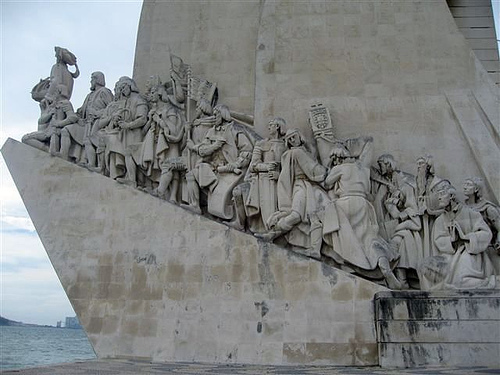 With this expedition Vasco da Gama became the first European to establish a sustainable and safe way to travel from Europe to India (hence the two globes representing the bridging of hemispheres) and of the influence of Portuguese explorers to the southern hemisphere is perhaps most markedly noticeable in a modern sense in the city of Macau. 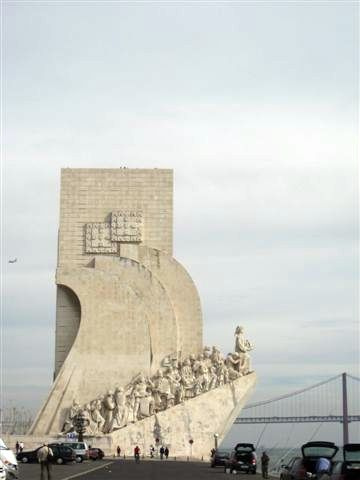 Inside the Tourbillon Cylindrique Geosphères Night Sky is the manual-wind calibre MB M68.40 which has two hundred and eighty one parts, including ninety-one for the tourbillon alone. Power reserve is 48 hours and it beats at 18,000VPH. 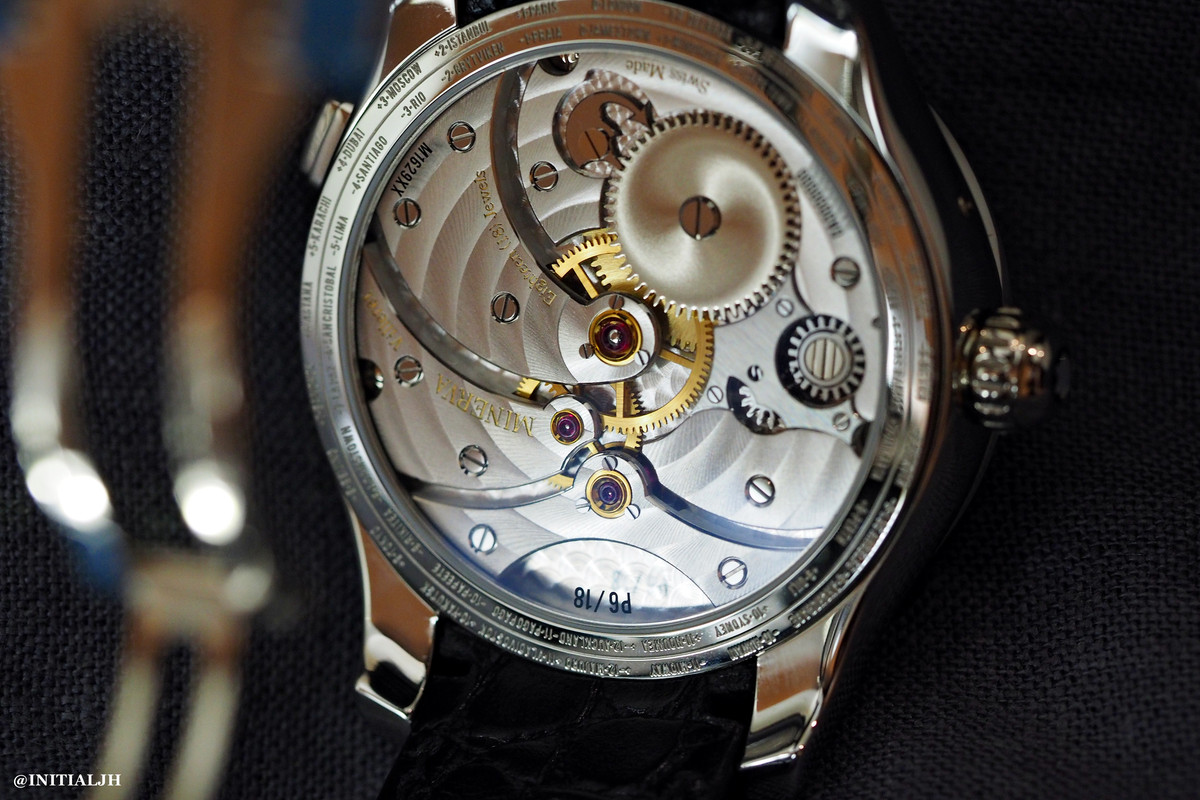 The names of twenty-four cities in the Northern Hemisphere and two dozen in the Southern Hemisphere whose time can be told are engraved along with the matching time zones on the back of the case for reference – you add/ subtract the relevant number of UTC hours (-12:00 to +12:00), as is the limitation number.

To be honest in a practical sense the use of this watch as a world-timer is probably a little unwieldy, especially for those of us with diminishing eyesight (thank you, smartphones), but I don’t think that this detracts overly from the watch itself; treat it as the beautiful watch that it is, admire the hand-painted globes, the tourbillon and the Aventurine dial. Just enjoy it.