Today’s new Chronomaster Sport from Zenith isn’t a revival, as a number of popular models of late have been, but part of the natural progression of the brand. During its half century history, the El Primero has evolved and segued in numerous directions, and to that we now add the Chronomaster Sport.

We have gone into the history and celebration of fifty years of the El Primero chronograph movement, introduced in 1969, in previous posts so we won’t rehash what you already know, here. If you don’t know, click on that link for some more information. Beating at 36,00 VPH and with a power reserve of 50 hours, the 1969 El Primero was the first high frequency automatic chronograph movement presented, put Zenith firmly on the movement firmament, and has remained a mainstay of the brand (not to mention helped, along the way, Rolex).

Today’s watch is a further progression of the Chronomaster. You may recall the Chronomaster 2 El Primero from the ‘fifty year’ celebration of 2019, which was in a 42mm case with the then new generation El Primero Calibre 3600 with a hacking seconds. It also had a black ceramic (a thoroughly modern material) bezel, only that one had the traditional tachymetre scale on it. The date, at 4:30 on the original El Primero, was shifted to the (more visually appealing) 6 o’clock, and the dial silver with a sunray finish. 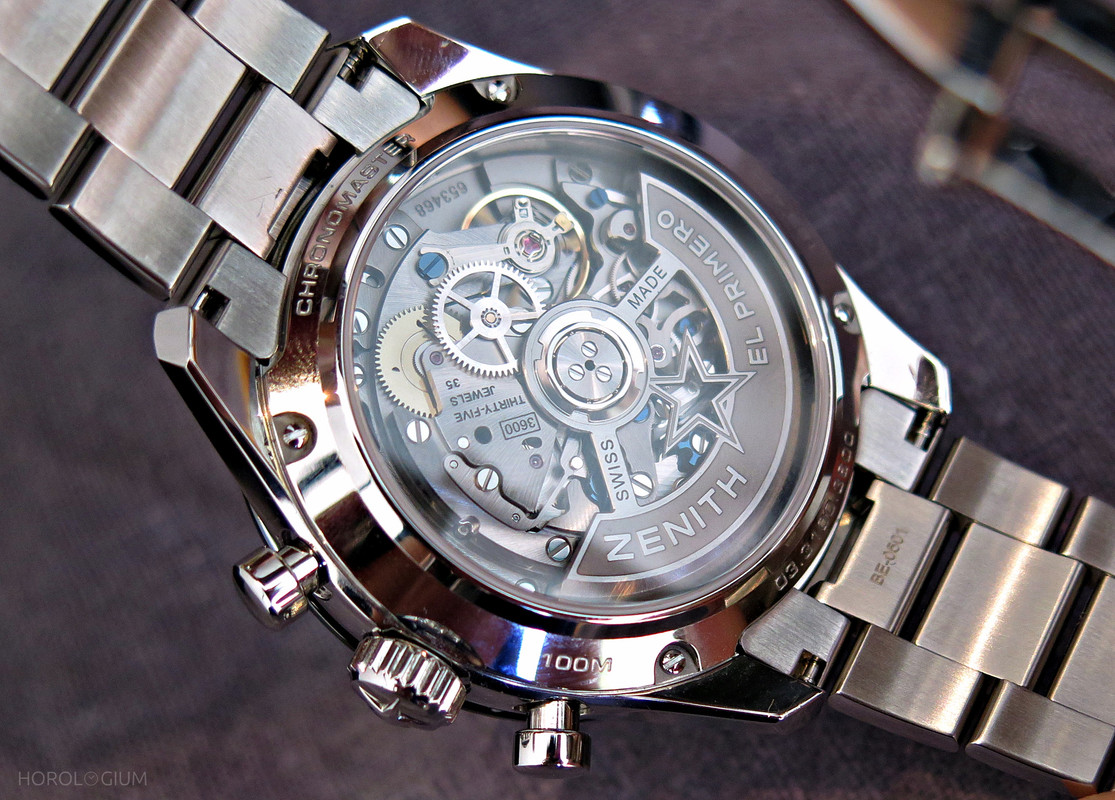 The movement has been regularly updated over the years, mainly through the use of advancement in technologies that have allowed its performance to be enhanced. The Chronomaster Sport is (again) powered by the automatic El Primero Calibre 3600, beating at 36,600VPH and with a (higher than the original) power reserve of 60 hours. It is visible through the sapphire case back with its blued column wheel and distinctive open-worked Zenith rotor. 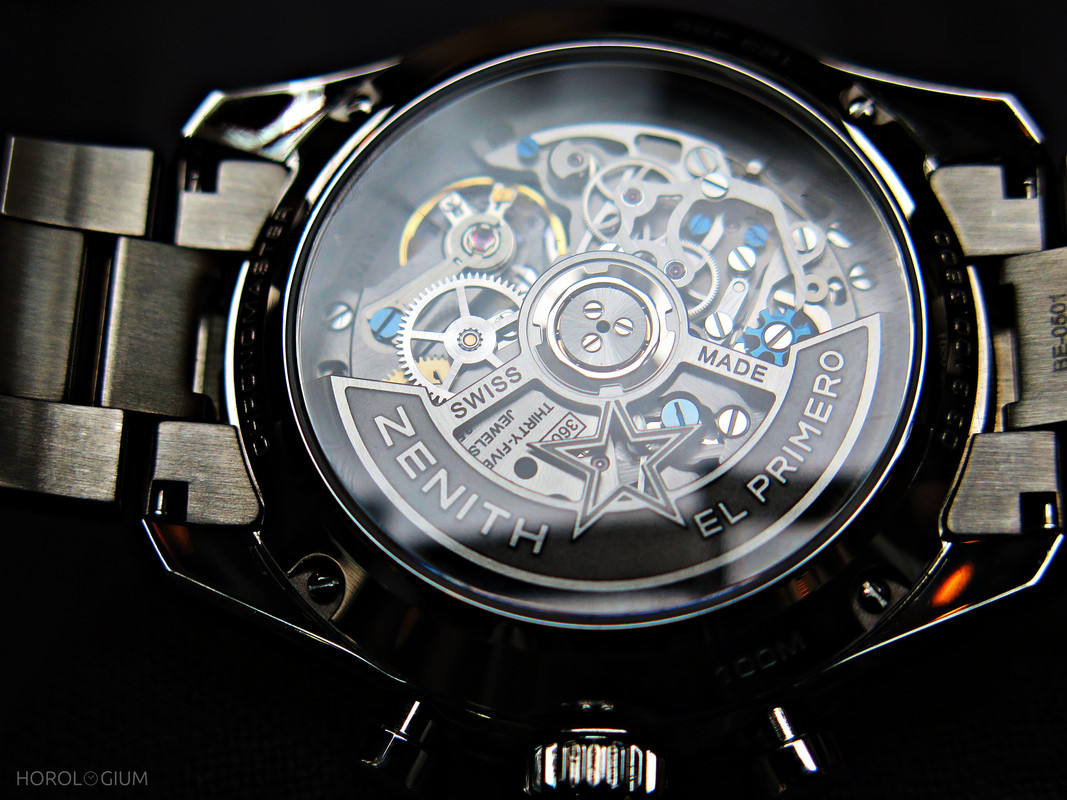 Coming in two references with either a matte white or matte black dial, the new Chronomaster Sport is in a stainless steel case is 41mm with pump pushers. Both dials have the familiar tri-colour tricompax chronograph sub dials in the blue, anthracite, and light grey combination. They have chosen to put the date at the original 4:30 position. 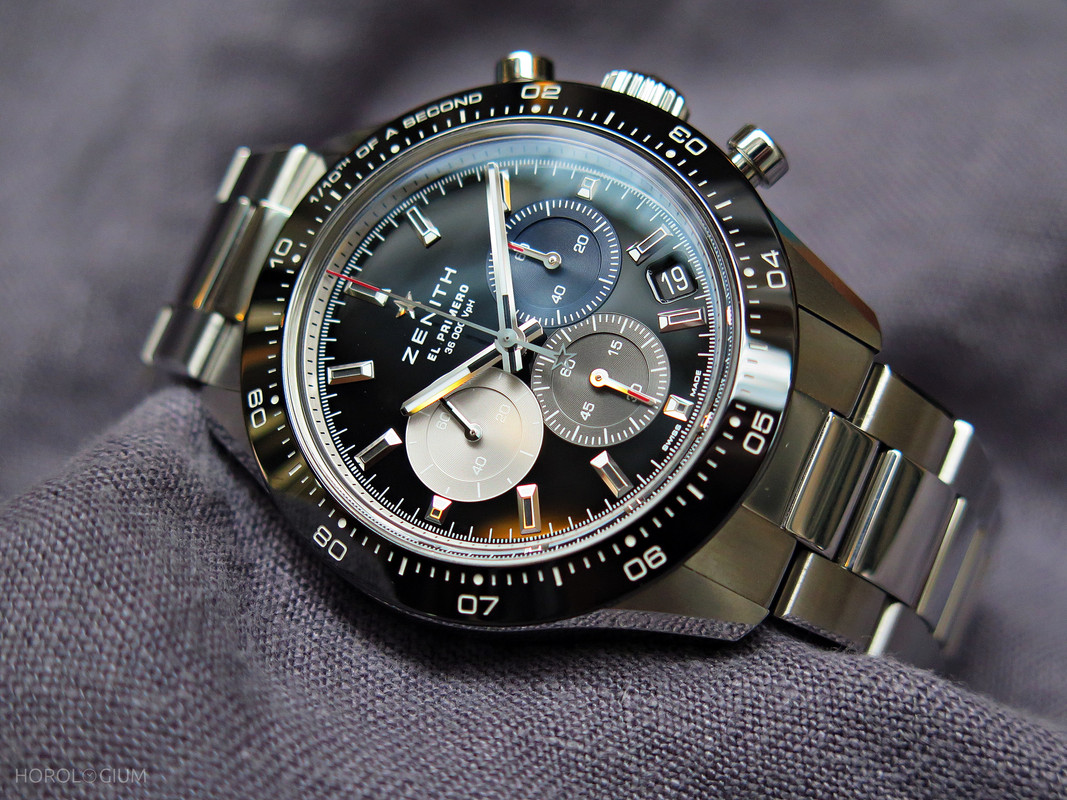 What is striking about it is the glistening black ceramic bezel with an etched, graduated 1/10th second gradation rather than a tachymetre (‘the’ feature of this new model), which may not be noticed at first glance but which may be its major selling point. The dial has a central chronograph hand that makes the famous one turn every ten seconds, a 60-second register at 3 o’clock, 60-minute register at 6 o’clock, and small seconds at 9 o’clock. The familiar faceted hour markers are rhodium-plated and have Super-LumiNova.

Both colour variants are available on either a bracelet with a double folding clasp on on a black ‘Cordura effect’ rubber strap. Solidly made, it doesn’t sit on the wrist like a 41mm; like some other recent Zenith models, it feels ever so slightly smaller than its specs, so if your preference is for sub 40mm watches, you may well be okay with the Chronomaster Sport. The Australian RRPs are $13,600 on the strap and $14,300 on the bracelet. In CHF it is 9,400 on the rubber strap and 9,900 on the bracelet.