It doesn’t feel like that long ago since we saw the original Urwerk EMC. The first EMC TimeHunter, which was based on the EMC, has morphed into the black TimeHunter Ceramic, the TimeHunter X-Ray, and now, the matching ‘light’ to the black ceramic – the Timehunter White Ceramic aka ‘Stormtrooper’.

Its name is, of course, a Star Wars reference.

The measurements for this new variant are the same – 51mm x 43mm x 15.8mm, only this time in a stainless steel and Grade 5 titanium (the case back) case that has had matte white ceramic applied to it, with a mix of satin-brushed and micro-blasted finishing. The stainless steel section of the watch is micro-blasted before the ceramic treatment is applied. The water resistance is 30m, so keep it away from water.

The dial is matte black, the main central time display part with a chequered pattern, and the Super-LumiNova is green for this new TimeHunter variant. A rotating disc displays seconds in five-second increments at 1 o’clock, and the (80 hour) power reserve indicator is located at 7 o’clock. 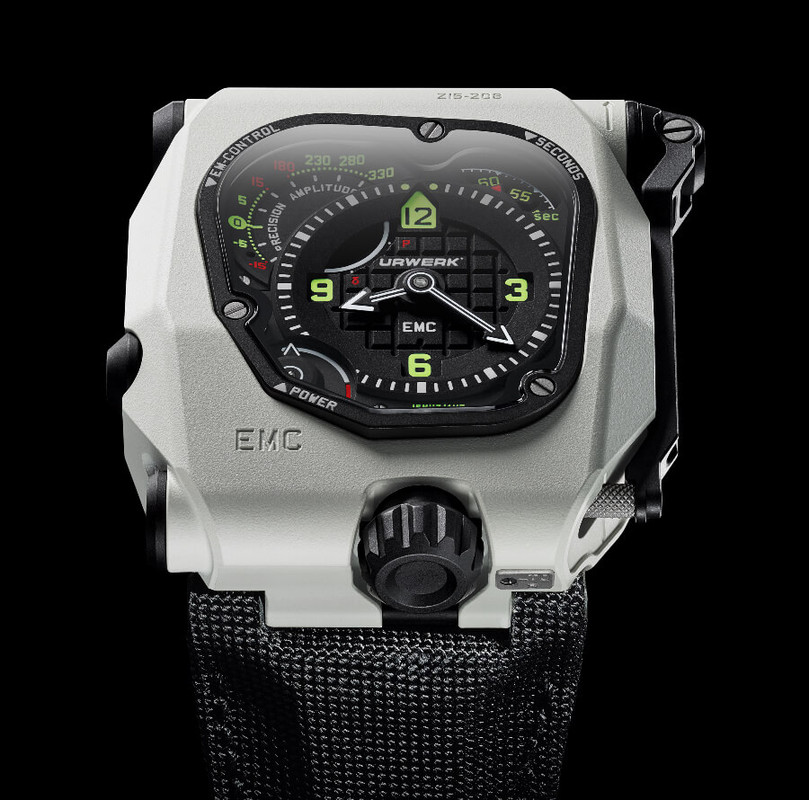 The EMC TimeHunter ‘Stormtrooper’ belongs to the UR-Chronometry collection. The indications linked to the chronometric monitoring function are around 11 o’clock and indicated by the “EM Control” marking on the screw-down bezel. The dial in the top left displays the two EMC electronic indications – timekeeping precision to from – to + 15 seconds per day, and the amplitude of the balance. Amplitude is how far in degrees the balance wheel moves through each oscillation. The amplitude ranges from 180° to 330°; the balance in most watch movements should oscillate between 220° and 280° for maximum efficiency.

Via the use of a monitoring system the EMC TimeHunter shows the wearer how many seconds the watch gains or loses in a day. With the aid of a screw in the case back, it can be adjusted (faster/ slower). Adjustment is, of course, a key part of Urwerk and of the UR-Chronometry pieces.

For those unfamiliar with the TimeHunter, it is a mechanical watch optimised with the help of an electro-optical circuit; an electronic module whose function is to measure the rate of the mechanical part. It has its own power source, separate from the rest of the movement. Positioned on the side of the case, a large retractable lever raises a dynamo which feeds the control micro-circuit.

Pointing towards the balance, it reads its amplitude (an indicator of the movement’s state of health) and the rate deviation (which is an indicator of accuracy), while comparing them to an internal clock. The latter takes the form of a processor operating at a frequency of 16 MHz and serves as a reference oscillator (i.e. a benchmark).

Thus on the one side we have the ‘engine’; and on the other, the control unit, which are integrated. Its hand-wound Calibre UR-EMC2, used in all the TimeHunters, was developed, designed, and made, by Urwerk. It beats at 28,800 VPH, has a balance that is coupled with an optimal sensor, coupled twin vertical barrels, and finishing is Côtes de Genève, snailing, and micro-sandblasting. 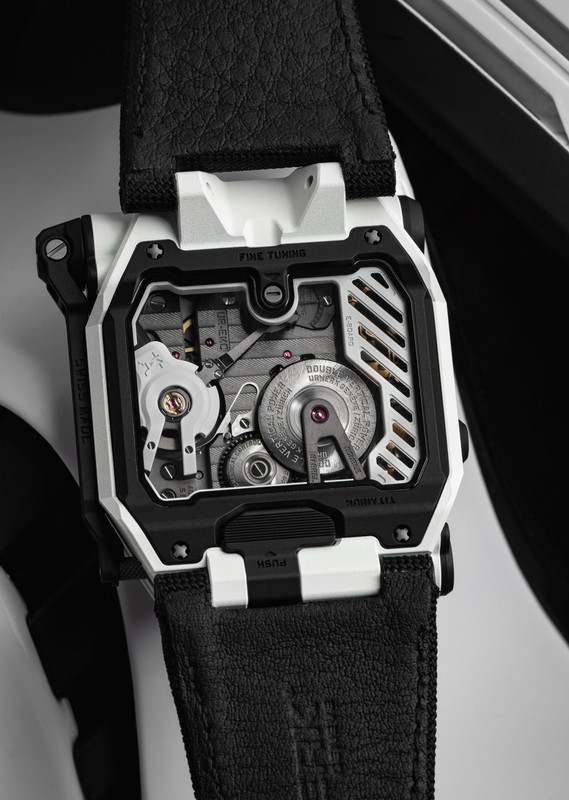 The Time Hunter has a Maxon® generator with manual winding charging super capacitor. A micro generator controls the computer component; all data is transferred via an optical reader that is situated on top of the balance wheel and captures the rate of oscillation. The sensor consists of a transmitter and a receiver and is connected to a 16,000,000 Hz (16 MHz) electronic oscillator and circuit board that calculates the difference between the movement and oscillator, capturing the precise rate of oscillation of the 28,800VPH (4 Hz) regulator over a period of 3 seconds.

The monitoring function of the Time Hunter is powered by a hand-operated generator which charges a capacitor. You use the fold-out lever/ handle to power up the micro generator that powers the precision indicator. If you want to read more about this, go to my original post.

As mentioned earlier, on the back of the watch is the crown plus the screw to fine tune the oscillation speed and correct for the inevitable small variations that will happen with the passage of time when it is worn. It lets the wearer make find adjustments to the balance rate regulator by changing the active length of the balance spring. You can identify it because it is engraved “Fine Tuning”.

‍The EMC TimeHunter White Ceramic Stormtrooper can be yours for CHF 115,000 (excluding taxes).

They are like chalk and cheese, but the look of this new TimeHunter reminded of another watch I saw a number of years ago which had a large white ceramic bezel as its front side.