Chopard’s Alpine Eagle collection was launched in 2019 with ten models. Now, it is now expanding with the addition of the new XL (44mm) Chronograph in three variants, all with the same integrated bracelets as the launch models. The ‘XL’ name is because the first models came in 36mm and 41mm sized cases.

As many of you may recall, the collection had its genesis in Co-President Karl-Friedrich Scheufele being persuaded by his son Karl-Fritz and other family members to update Chopard’s 1980s St Moritz pieces (designed at the time by Karl-Friedrich) for this, their first luxury sports watch collection.

The St Moritz, which was primarily in stainless steel and with an integrated bracelet, had a distinctive bezel with two screws each at 12 o’clock, 3 o’clock, 6 o’clock and 9 o’clock, with fluted edges around the screws.

The Alpine Eagle recalls the original, but with an updated design, and it brought in a new material called Lucent Steel. There are still eight screws on the bezel, but the bezel is now round. The case has discreet ‘ears’ on either side which on the right, also protect the crown. The watches all feature integrated cases and bracelets with satin-finished ingot-shaped links, and a slightly raised and polished centre link. The crown is engraved with the compass rose motif. The hour/ minute hands, and the numerals, are coated with Super-LumiNova.

You may know of Chopard’s use of Fairmined gold; it is something about which we have mentioned a number of times before. With the Alpine Eagle, the steel used is the first example of recycled steel being used in Swiss watchmaking, with 70 per cent of the steel coming from recycling. Lucent Steel A223, as it is called, is an alloy that is recreated by re-smelting steel at a higher temperature along with some other ingredients, resulting in a material that is hypoallergenic, stronger and harder than the usual steel (223 Vickers versus stainless steel’s 150), and 50 per cent more scratch resistant. It also shines more brightly that photos can properly show, so to get its full glow, heft and quality, you really need to handle the watches. 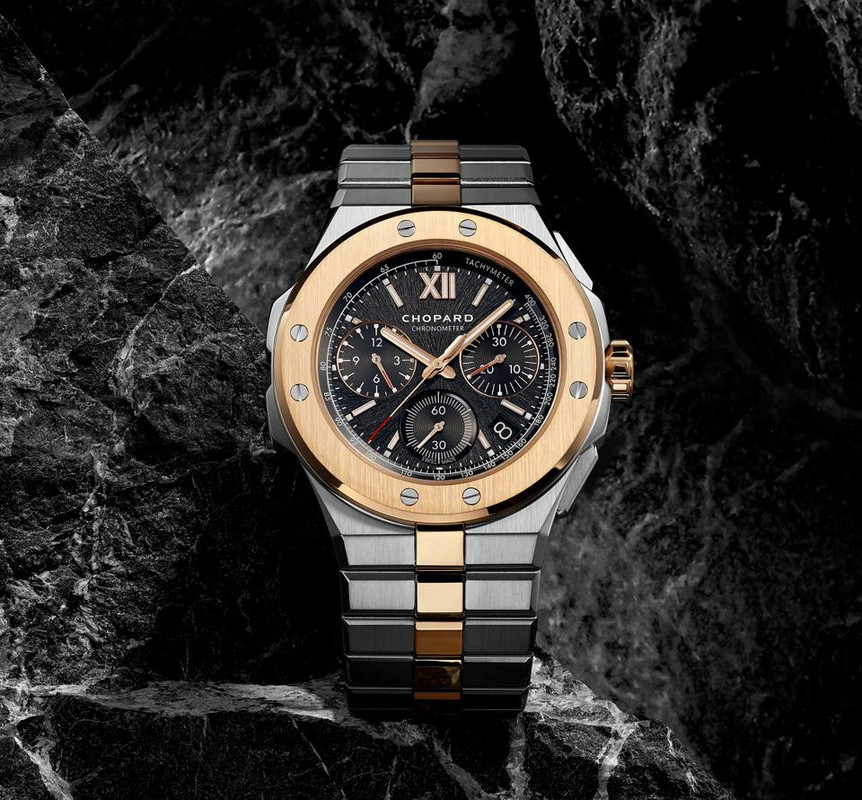 The new XL Chrono is in three variants – two in Lucent steel (one with an Aletsch blue dial, the other in Pitch Black), and the third in Lucent Steel and the Chopard Fairmined rose gold. The colour names refer to the deep black nights in the Alps, and ‘Aletsch blue’ refers to Switzerland’s largest glacier of that name. 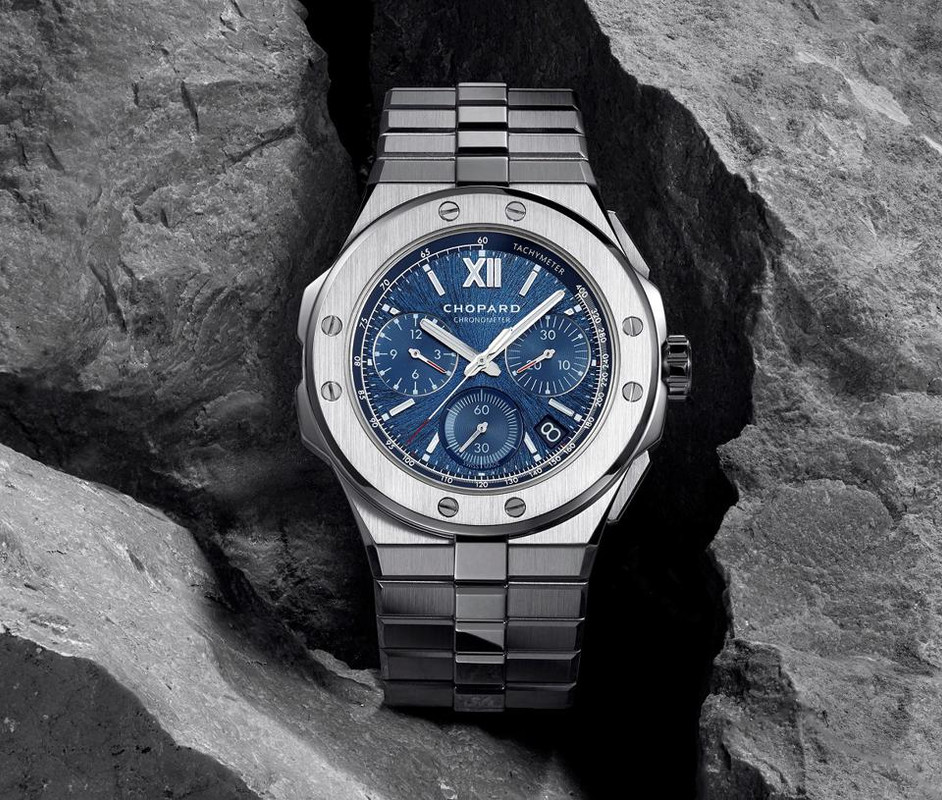 The dials of the new XL Chronograph feature the same sunray-like pattern that is their interpretation of an eagle’s iris and which, as I discovered last year, really does have to be seen closely under a loupe for their quality to be appreciated. The dials have applied Roman numerals and indices in white gold. The counterweight of the seconds hand looks like a feather. In spite of its name, the avian influence on is worn lightly in its design.

The chronograph pushers are on either side of the crown guards, and the chronograph functions are indicated on the dial in a tricompax fashion. At 3 o’clock is the 30 minute counter, a small seconds is at 6 o’clock, and at 9 o’clock is a 12 hour counter. There is also a date window at between 4 and 5 o’clock. There is an inner bezel ring with a tachymeter scale, with red used at 100, 160, and 240. The bezel is the same as for the 2019 models, with sets of two screws and a compass rose.

Inside the 100m water resistant case is the automatic COSC-certified in-house Calibre 03.05-C, with a flyback column wheel chronograph function. It beats at 28,800 VPH and has a power reserve of 60 hours. 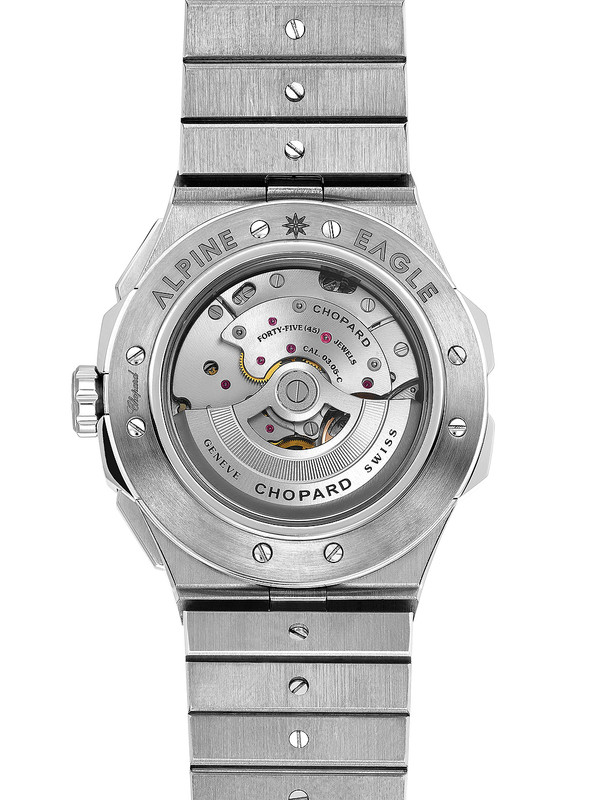 The Alpine Eagle XL Chrono has an RRP of AUD 28,100 for the models in Lucent steel A223, and AUD 39,200 for the bimetal model in Lucent steel and 18k gold. For those in Sydney, you can call the Chopard boutique for further information and enquiries.

Like Loading...
‹ NEW: Hublot and Harrods Big Bang Unico Sapphire
EXHIBITION: “The Heartbeat of the City: 500 Years of Personal Time” ›