Fiercely technically-minded brand Ferdinand Berthoud has launched the new Chronomètre FB 2RE; inspired, as the brand’s watches are, by the horological achievements of the man whose name they bear.

In 1770 Ferdinand Berthoud was awarded the title of “Clockmaker and Mechanic by appointment to the French King and Navy” under Louis XV and received a royal commission for twenty Marine Clocks to be used in explorations. To mark the sestercentennial of this accomplishment, Chronomètre Ferdinand Berthoud have announced this elegant and impressive new watch loosely inspired by the Marine Chronometer No.6.

You may recall our previous post about a watch that was inspired by the Marine Chronometer No.7 and featured both a tourbillon and a fusée-and-chain. This new piece combines a one-second remontoir d’égalité with a fusée-and-chain, the latter visible through a window and screw-down frame in the case’s middle, and introduces a new movement – the Calibre FB-RE.FC.

The Chronomètre FB 2RE comes in two limited editions of ten (numbered) pieces each in either 18 kt (ethically sourced, in line with the gold initiatives of their sibling Chopard) white gold or rose gold. The former has a white enamel dial and the latter, a black enamel dial. The cases are 44mm with a thickness of 14.3mm, have a curved bezel, knurled crown with a black ceramic medallion that disengages as soon as the barrel is fully armed, and sapphire crystal on both front and back. The screws for the frame of the window in the case middle are mirrored in the way in which the lugs are secured to the case and on the case’s back as well. 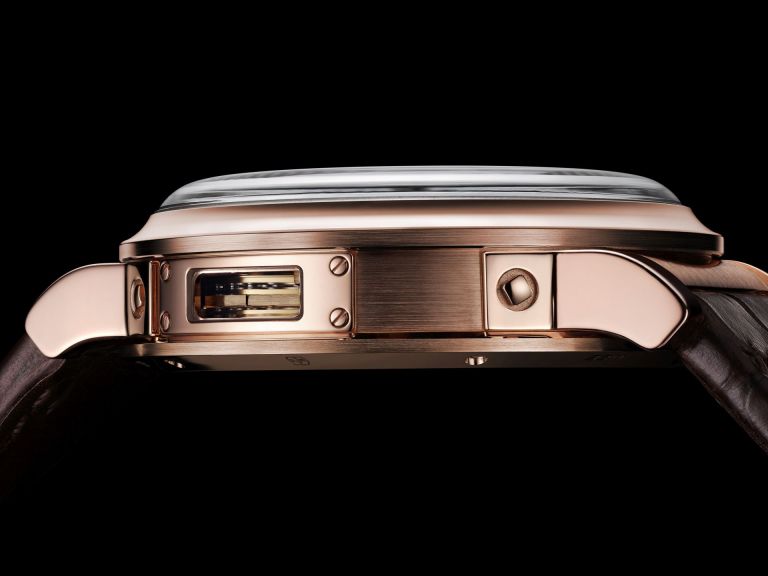 The design chosen for the Chronomètre FB 2RE’s case harks back to the shape of the Marine Clocks, which were protected by a cylindrical copper drum held in a horizontal position by a gimbal suspension system invented by Ferdinand Berthoud.

The dial is very traditional – grand feu enamel (on a steel base), but on two levels. This split level design is also a nod back to the Marine Clock No.6, which was designed this way. In the clock’s centre the hours indication was in Roman numerals and the minutes, in Arabic. The two levels of the Chronomètre FB 2RE’s dial are a flat medallion in the middle, and domed surrounding it. 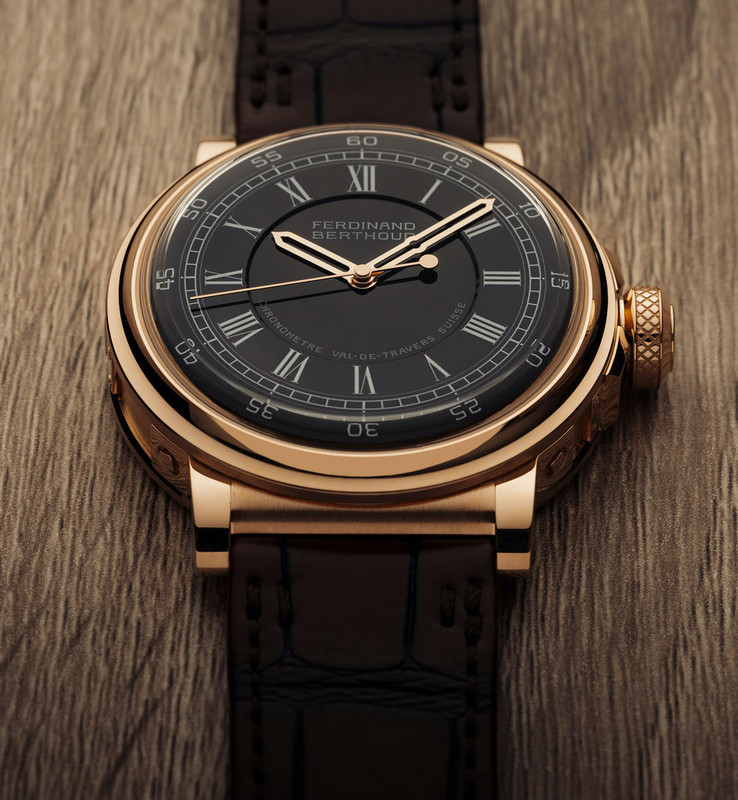 The inscriptions of “Ferdinand Berthoud” and “Chronomètre Val-de-Travers Suisse” are in painted black or white enamel, and require an additional firing on top of that required for the dial itself. Like its inspiration, there are Roman numerals for the hours and Arabic numerals for the minutes.

The hour and minute hands are either in CVD-blued 18kt white or in rose gold depending on the model, and the deadbeat seconds hand in CVD-blued or gilded titanium. Both variants have an arrow-shaped power reserve hand in CVD-blued 18kt gold on the back of the movement. The stop-seconds means that when you pull out the crown, the balance stops whilst you adjust the time, before recommencing once the crown is back in place. 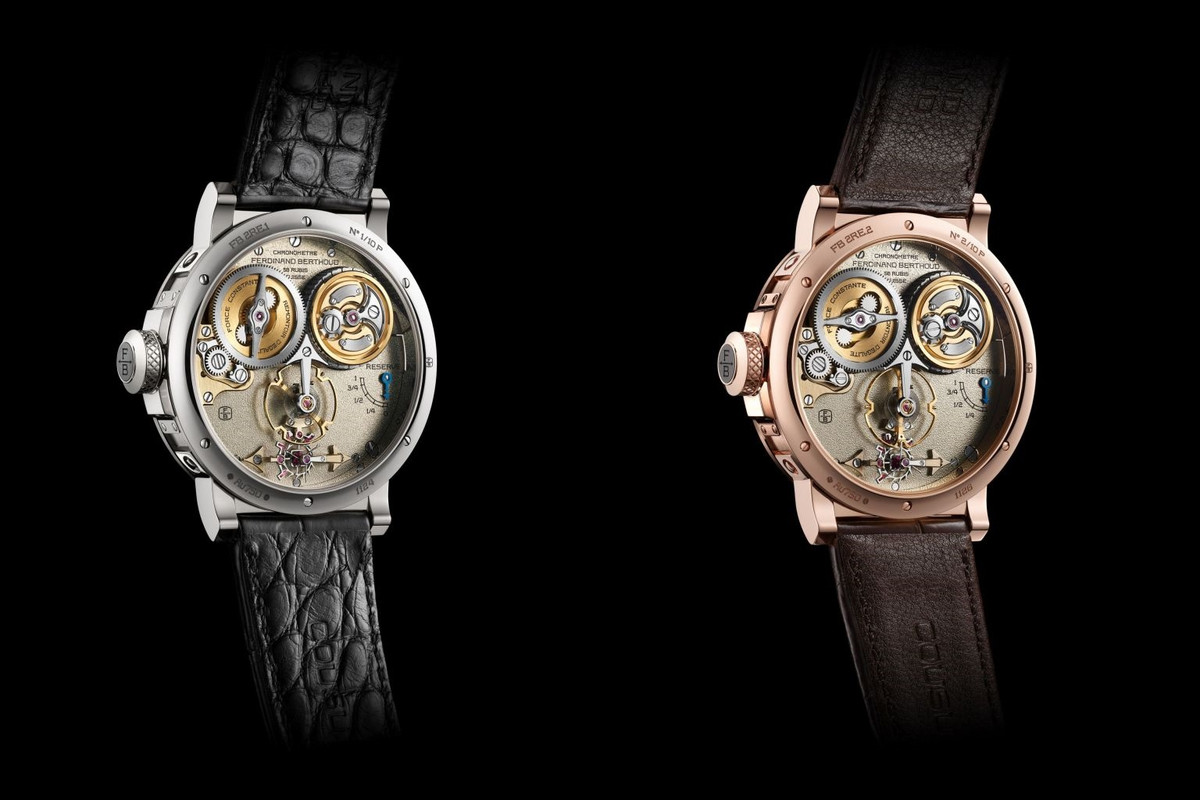 Beneath the open case back is the new manually wound in-house COSC-certified Calibre FB-RE.FC which beats at 18,800 VPH and has a power reserve of 50 hours. As mentioned earlier, the watch is 14.3mm thick. The movement is 9.37mm of this.

It comprises of twenty-six bridges held by ten steel pillars, a construction based on the original Ferdinand Berthoud marine chronometers by which it is inspired. It combines a constant force fusée-and-chain with a one-second remontoir d’égalité. There is a patented suspended fusée differential winding system, which is equipped with a Maltese Cross stopwork that protects the movement by limiting the winding of the mainspring to six turns, and acts as a buffer when the barrel is fully wound. The FB-RE.FC movement’s patented barrel and fusée are both suspended, attached on one side to the main plate.

The torque delivered by the barrel of a watch movement will naturally vary according to the degree of winding. In timepieces using a fusée-and-chain when the movement is fully wound, the chain is completely wrapped around the small end of the spindle-shaped fusée and the mainspring is at maximum power. As the chain moves from the small to the large end of the fusée, this force diminishes. The variation in the diametre of the fusée compensates for the reduction of the mainspring torque by equalising the torque reaching the gear train, which receives a constant supply of energy. For those who are curious, the chain’s length is 285mm and it has 790 components. 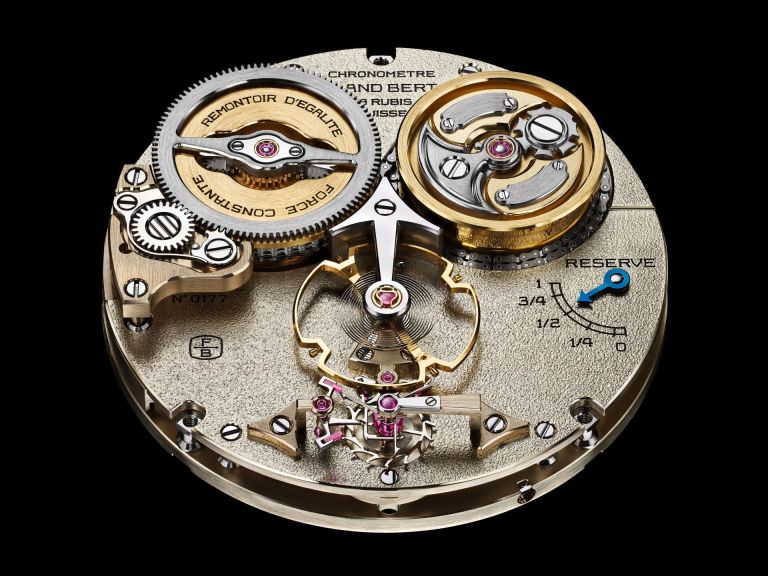 At its basic level, a remontoire (from the French ‘remonter’, meaning ‘to wind’) is a secondary mechanism that provides a more constant force to the escapement and aids precision by balancing out the force caused by uneven friction in a gear train. It is periodically rewound by the main power source.

In principle, a remontoire can be applied to any wheel in the train. Chronométrie Ferdinand Berthoud has addressed the issue of the energy use of a remontoire by putting it where the torque is lowest (i.e. it receives the least force) – at the escape wheel, where it is fitted concentrically with the wheel and directly connected to the escapement. It stores a small amount of energy in a secondary hairspring. Its force is delivered to the balance via the escapement at one second intervals via a triangular ruby cam. When the escape wheel has moved 2.5 teeth forward, the ruby cam releases the stop lever and allows the force into the remontoire. The escape-wheel pinion is connected to the stop wheel and marks off the seconds. It is all connected to the centre seconds hand and enables the Chronomètre FB 2RE’s deadbeat seconds. 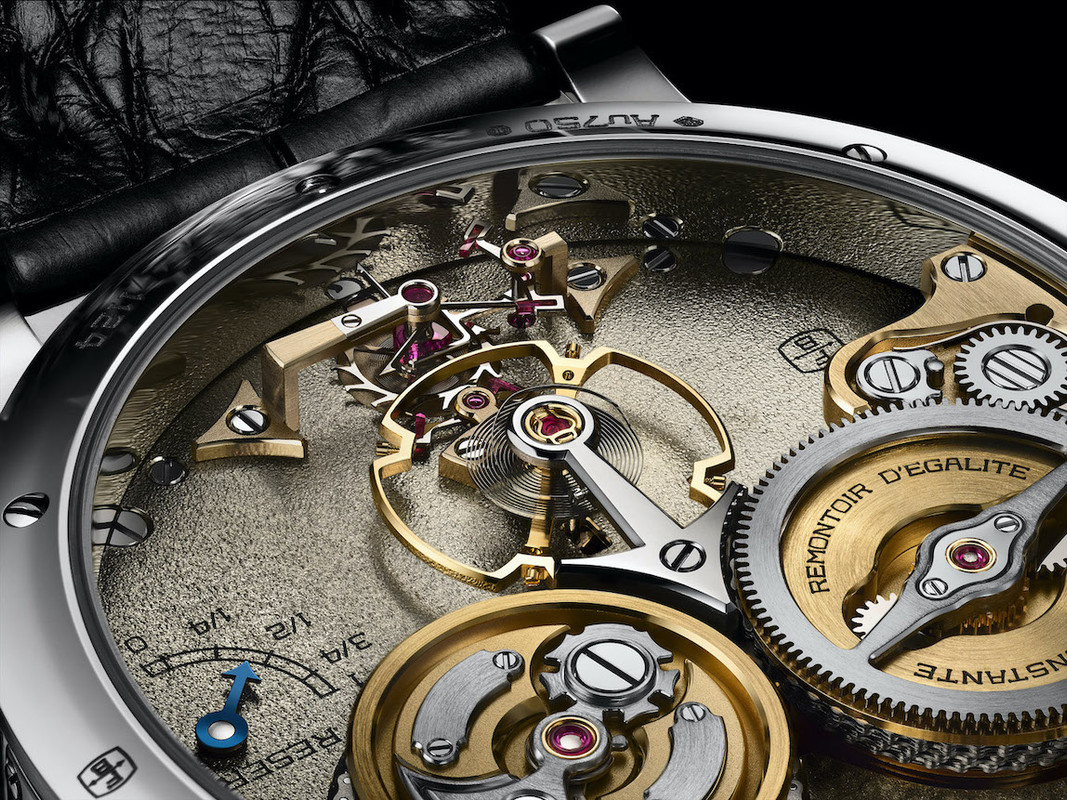 Flipping over to the back of the watch, the power reserve of 50 hours indicated on the main plate by a blued arrow within an engraved and black-varnished sector.

Decoration-wise, there are nickel-silver bridges with frosted finishing that is achieved by manual graining with a brush. The arrow-shaped steel balance bridge is mirror polished, as is the upper part of the stepped escape-wheel bridge. The barrel and the fusee are satin-brushed, as are all of the chain’s components. The movement parts feature hand-chamfering and beveling.

These new pieces come on leather straps with a matching-gold pin buckle, although a folding clasp is available if you so wish.

The price of the limited edition Chronomètre FB 2RE is CHF 210,000.

Like Loading...
‹ NEW: Accutron launches as a brand with new Electrostatic movement
INDUSTRY NEWS: Swiss Takeover Board on Murdoch entry into MCH Group ›