Is fifteen years a long time between changes?

There is no actual answer to this question, but in thinking about it, there’s also another thing that might be (re) considered – the perceived ‘need’ to create or present new pieces every year/ half year because of ever decreasing (horological or otherwise) attention spans.

Brands often decide to bring back old pieces in a new form, or to make changes that encompass everything from cosmetic design differences to case tweaks, to more substantive upgrades, usually of the movement. Today is about a watch that has been given a number of amendments along this continuum.

The Lange 1 Time Zone of 2005 has been updated not just with a new in-house calibre but also with some design changes that may seem small, but which actually lend themselves to a cleaner look. It does not make the 2005 look ‘outdated’ in any sense, just different enough to be noticeable. The photo below shows the original model. 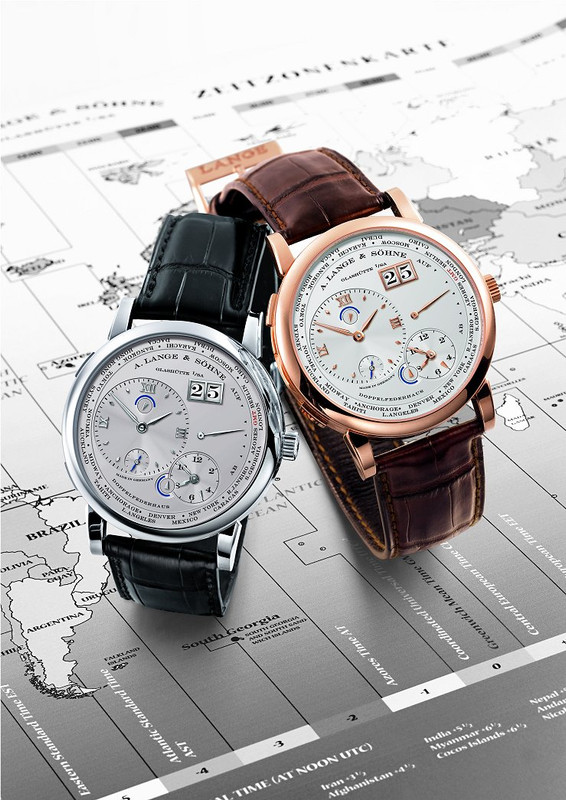 Like its predecessor, the new model displays the time in 24 time zones. The home time is on the larger of the two off-centred dials, and the second time zone is displayed on the smaller one. The classic Lange outsize date is still present, as is the power-reserve indicator, and it retains the rotating adjustable city ring for the setting of the second time zone. 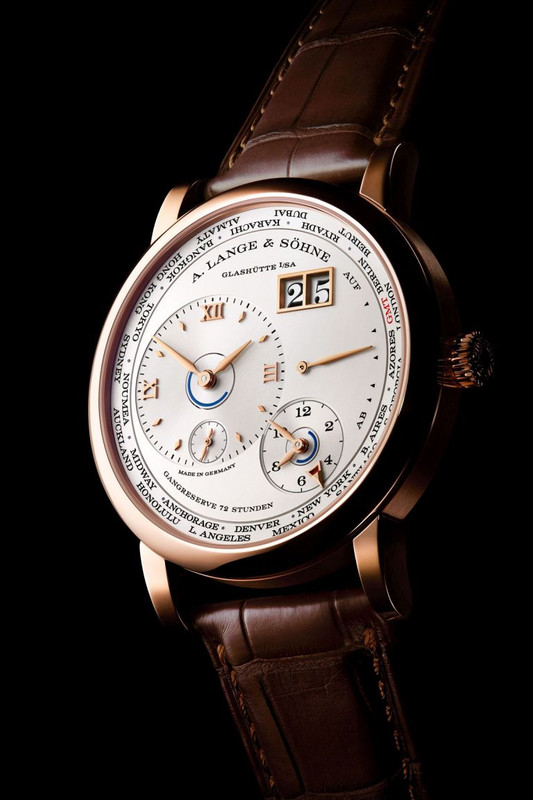 The two time dials are where some of the most noticeable changes are situated – originally indicated with rotating arrows within their own individual small circles, the day/ night indicators for home time and zone time have been moved to the centres of the two time dials. This also means that the second time zone dial is now, like the home time dial, complete in form, and looks better for this. Featuring blue printed semicircles, these discs complete one rotation every in 24 hours whilst the hour hand does it usual two revolutions per 24 hours. The segment that is the same colour as the dial is 0600 to 1800 and the blue background from 1800 to 0600. 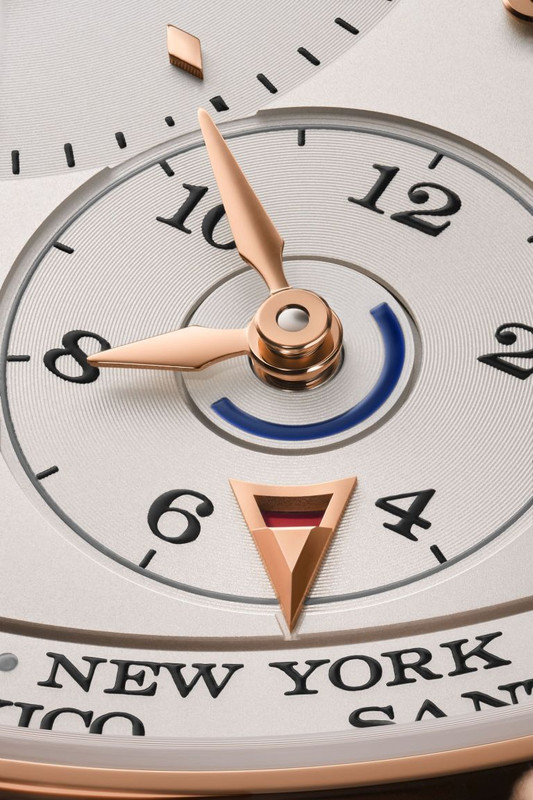 You will notice the arrow at 5 o’clock on the smaller dial. This shows the reference location for the zone time that has been set. It includes a new summer time indication – if its small window is red, the relevant city is currently under daylight saving time i.e. one hour has to be added to the zone time from the spring to the autumn in the northern hemispere, and from late summer to the spring in the southern hemisphere. If standard time applies in the city year-round, the display shows a white background. In these official photos, local time 1352 and 0752 New York (daylight saving) time. The blue segment which marks 1800 to 0600 shows night time.

When the time is adjusted with the crown, both displayed times are corrected simultaneously. A feature retained from the 2005 model is the adjustment of the second time zone. When the pusher at 8 o’clock is pressed, the city ring jumps from west to east by one time zone. This simultaneously activates the hour hand in the smaller dial, which advances by one hour and now indicates the zone time of the city indicated by the aforementioned golden arrow.

The new model has also kept the useful synchronisation mechanism that allows the wearer to transfer the zone time from the smaller to the larger dial when travelling so the current local time is more easily read.

If the crown is pulled out to the second position, the times of both zones can be adjusted synchronously. But if the button for setting the second time zone is pressed and held, the hour hand for subsidiary time zone dial is ‘frozen’ in place, which allows the former home time on the large dial to be changed to the new ‘local time’ by turning the crown. Depending on where you are, it may now be necessary to correct the date, which is connected to the main time. This is done via the pusher at 10 o’clock. 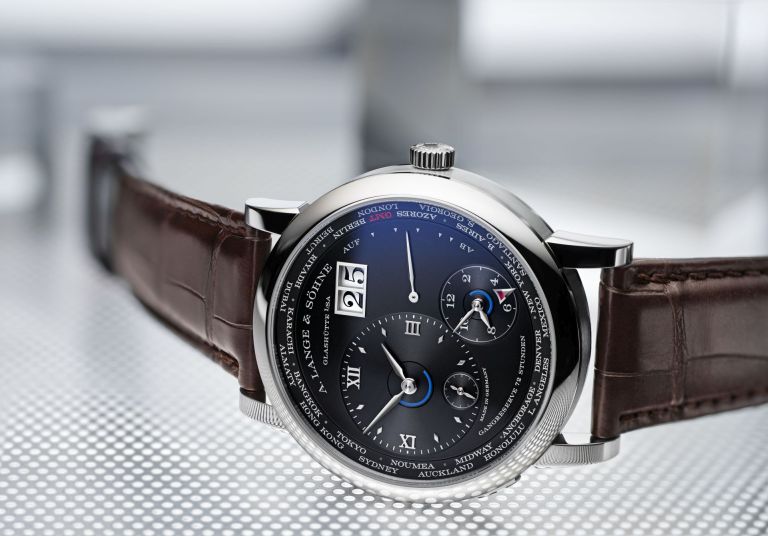 Another noticeable difference on the new dial design is that ‘DOPPELFEDERHAUS’ is gone, replaced by ‘GANGRESERVE 72 STUNDEN’. Which brings us to the biggest change (update). 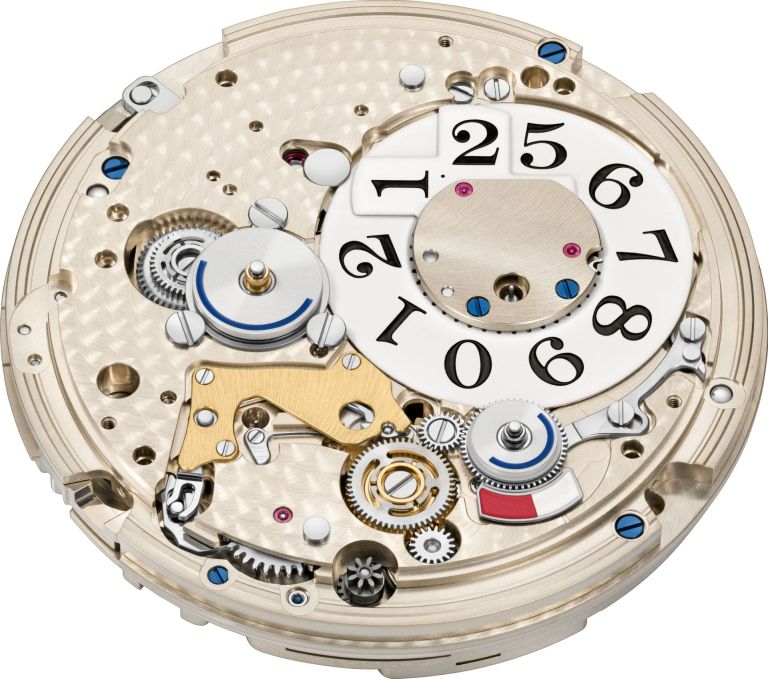 Inside is the new manufacture Calibre L141.1. The older model had the manually wound Calibre L031.1, with twin mainspring barrels; plates and bridges made of untreated German silver; hand-engraved balance cock and intermediate-wheel cock, 21,600 VPH, and a power reserve of 72 hours. 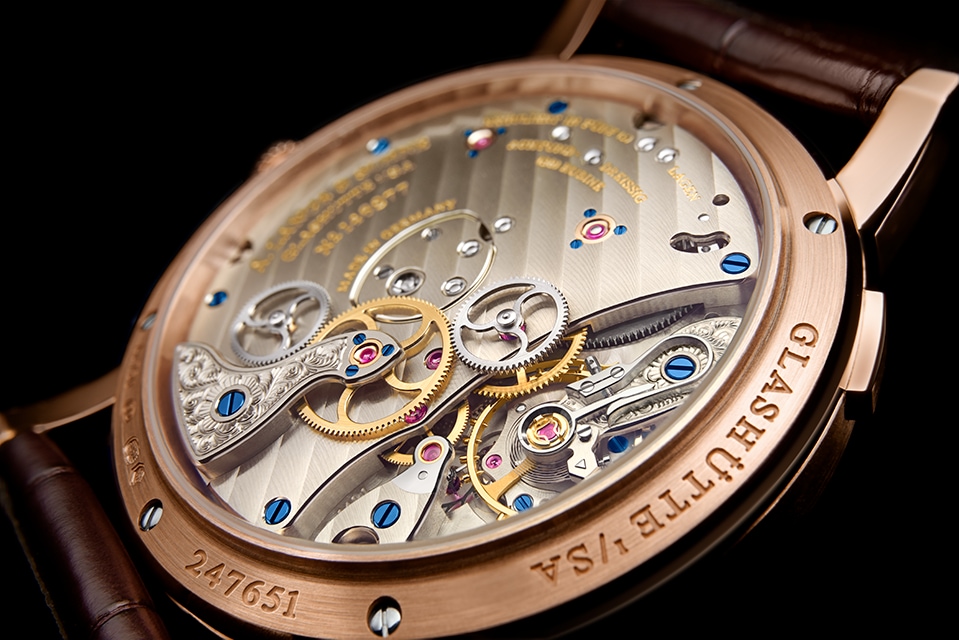 In comparison, for the Calibre L141.1, which also beats at 21,600 VPH, the 72-hour power reserve is achieved with only one spring barrel. The classic Lange three-quarter plate made of untreated German silver is here, as are screwed gold chatons, blued screws, and of course the hand-engraved cocks.