Over the past couple of months there has been widespread coverage of how the natural world has (re) emerged as humans have retreated indoors, whether it be in the form of flora, fauna, or the sight of stars or mountain ranges as pollution has disappeared and skies have cleared.

There are many sounds that are being associated with this period, but it has also been a lot more quiet in many public places, and birdsong has also been more noticeable. The ‘music of time’ is also the music of different times.

Vacheron Constantin’s “La Musique du Temps®” is a range of one-of-a-kind timepieces created within the Les Cabinotiers department as tributes to the art of music, and this post is about four such new watches. Sometimes the pieces that come out of this range have literal music, but in this case, it is figurative – the music of birds. Les Cabinotiers is where Vacheron really show off, whether this be purely horologically, artistically, or both.

The four birds are the Hummingbird, Blue jay, Blue tit, and European robin. They are depicted in champlevé painted enamel, counterbalanced by a guilloché basket-weave patterned time indication sector. Champlevé enamelling is where ‘cells’ are carved or cast into the surface of the metal object, and filled with vitreous enamel. The piece is then fired until the enamel melts, and when cooled the surface of the object is polished. 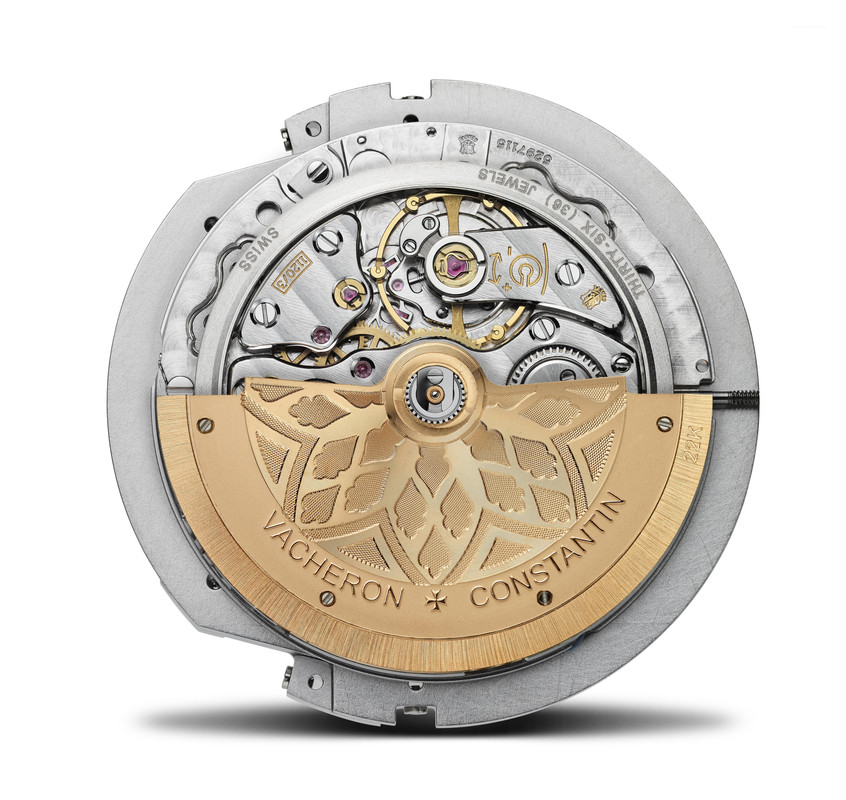 The timekeeping aspect is a ‘dragging hour’ passing through the minute display, starting from underneath the Vacheron Constantin name and moving downwards until it is the time for the next digit to appear. Each of the three satellite ‘arms’ has four hour digits on a rotating disc. This is powered by the classic ultra-thin automatic Calibre 1120 AT movement. In this iteration, the Calibre 1120, beating at 19,800 VPH, has a guilloché gold oscillating weight and a 40 hour power reserve. 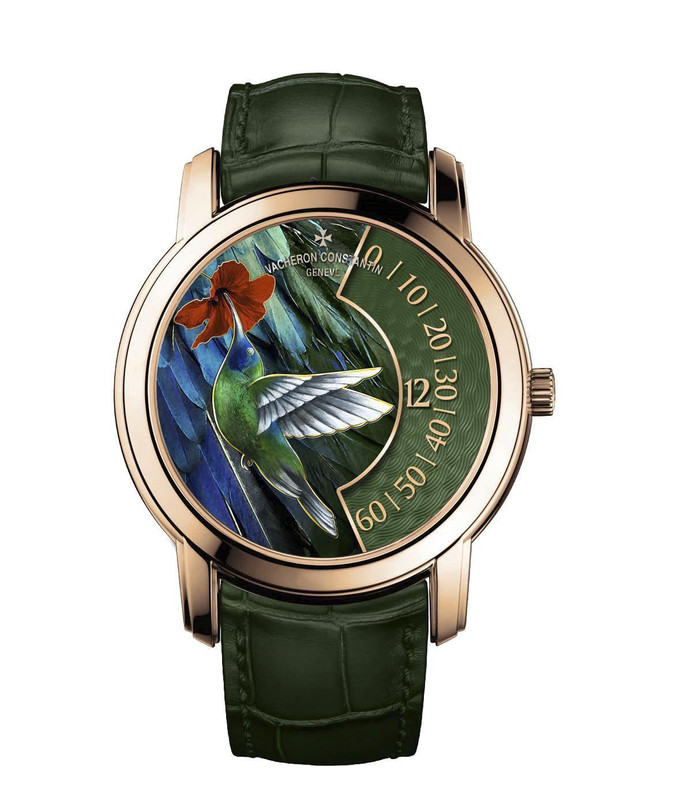 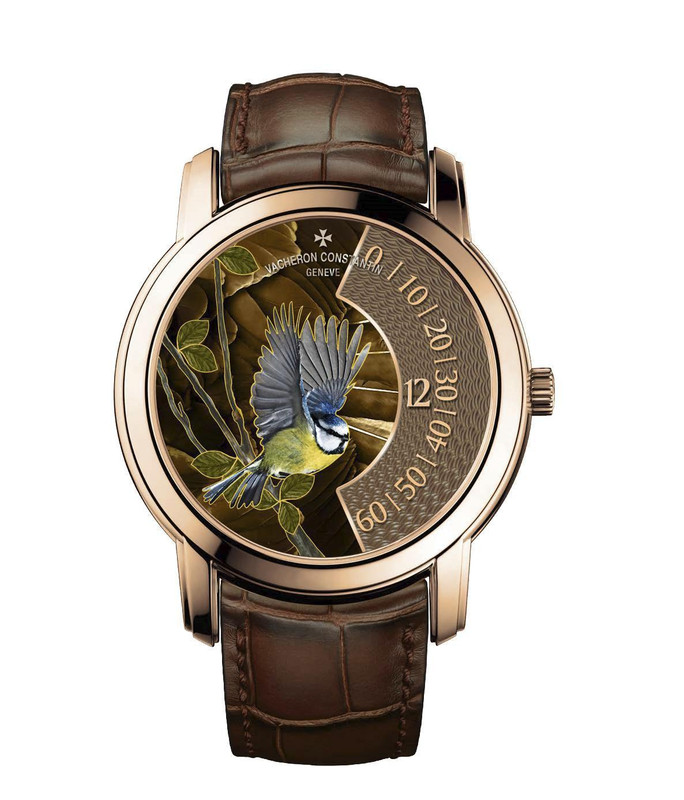 Next is the Blue tit, a mix of blue, yellow, white, and green. This familiar inquisitive garden bird is quite busy at this time of the year, with April being the month when the female builds her nest before starting to lay an egg per day (averaging eight to twelve in total) in early May. 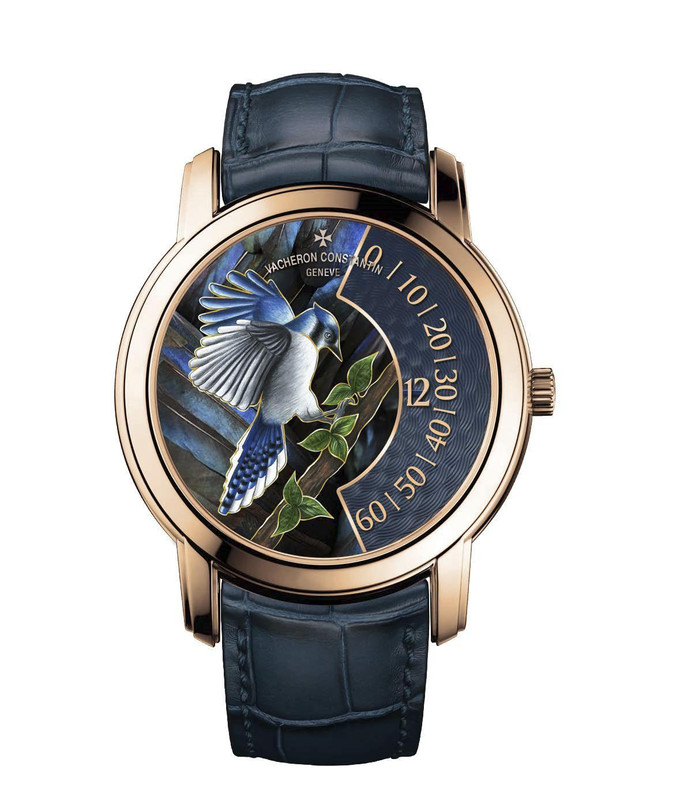 The third bird is the Blue Jay, a large crested songbird. Like the Blue tit, it is not uncommon to see them in areas of human habitation. Jays are usually extroverted, not averse to making their presence known, and their call carries. They have also been known to store food in a throat pouch. 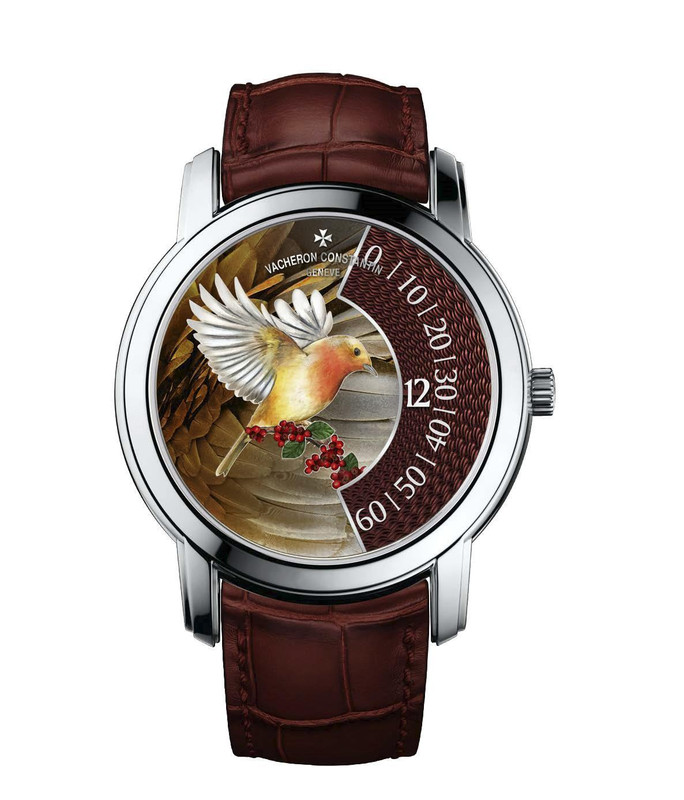 Finally, the European robin, or Robin redbreast as it is popularly known, with has both male and females sharing the distinctive red chest colouring. A very popular garden bird, both the male and female birdsong changes between seasons both in terms of when it is heard, and its tone.

The four birds are in 40mm sized cases of white gold for the robin, and pink gold for the others, with each coming on a Mississippiensis alligator strap in a colour mirroring that of the time display sector of the dial.

Vacheron Constantin’s ‘Les Cabinotiers’ are where the fun bespoke pieces like these happen and where their hashtag #OneOfNotMany is definitely the case.