One of the more unexpected non COVID-19-related things that has happened over the last few weeks has been two reminders of a time, years ago, when I set myself what turned out to be an overly ambitious goal of reading as many Icelandic/ Norse sagas and epics as I could. Even more unusually, both of these memory joggers have been via watches. The second of the two reminders of my failure, and one which sent me to my shelves, is the subject of today’s post – the new Skadi from GoS.

Firstly, let’s look at the watch.

GoS is known for their use of Johan Gustafsson’s Damascus steel, and so it is with the Norse mythology-inspired Skadi, which combines black Damascus steel with red gold, and features an ice blue luminous mother-of-pearl (MOP) dial developed and made by Patrik Sjögren that debuted in the Sarek Glacier. The dial consists of three layers – a brass base, a middle layer of Super-LumiNova, and the top MOP layer which is both coloured by and back-lit through, the middle layer. Why MOP? Well for a similar reason to that of the Sarek Glacier – Skadi (Skaði) is a Norse goddess associated with winter (and the mountains). She is often depicted skiing and with a bow and arrow, both of which she utilises for hunt and battle. This watch named for her has a water resistance of 5ATM, so it can endure a bit of snow. 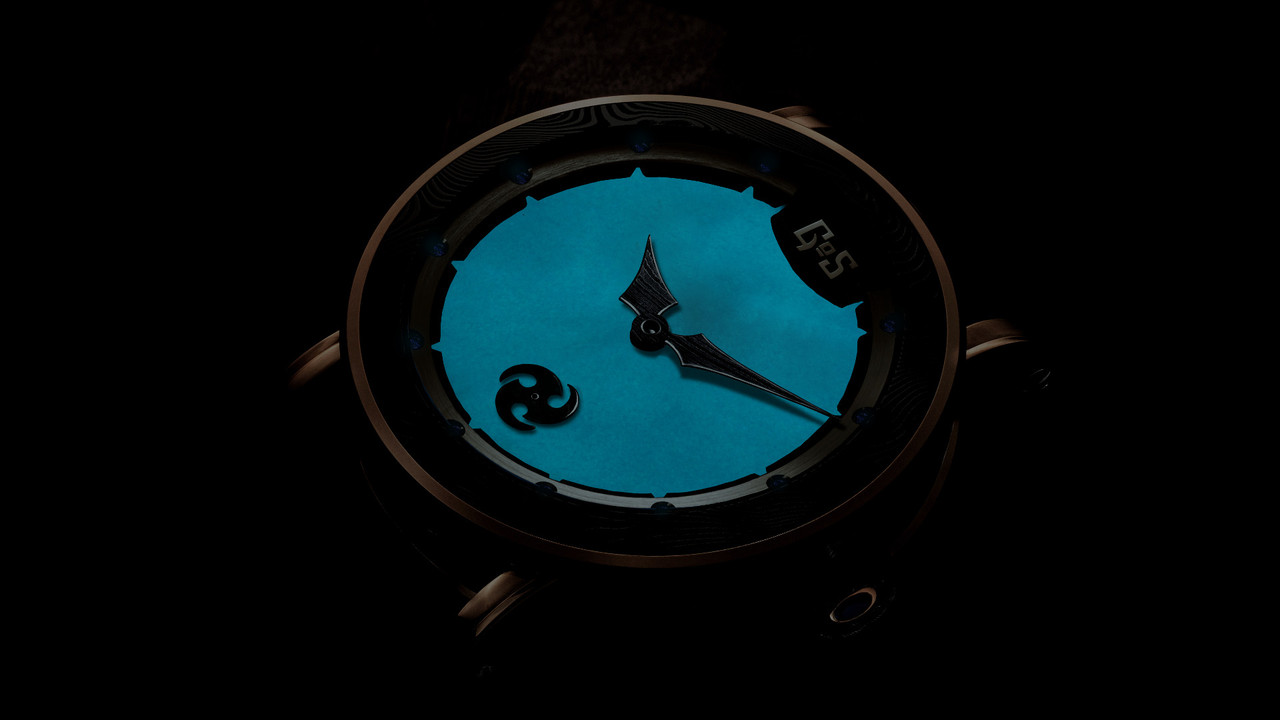 GoS developed the black Damascus steel used in this 44.5mm case in 2018, and it was first introduced in the collaboration with Singer Reimagined for the pièce unique Track1 Black Damascus made for Only Watch 2019. The patterns on Damascus steel are less prominent if coated (in the case of the Skadi, with black PVD), but the qualities of the industry-strength PVD coating that GoS use (and developed) ensure that the contrasts remain sharp to the eye and slightly reflective. One thing that GoS is known for is liking to keep things (from the watch to the box in which it comes) local, and the PVD coating is made by ionbond, which is in Linköping.

Going from the outside inwards – the case’s back, ring, and lugs are all 18k gold and handmade in Linköping. The crown continues the Damascus steel theme but has a large blue sapphire snugly fitted into 18k gold and with double gaskets. It is also quite large – 7.5mm in diametre. 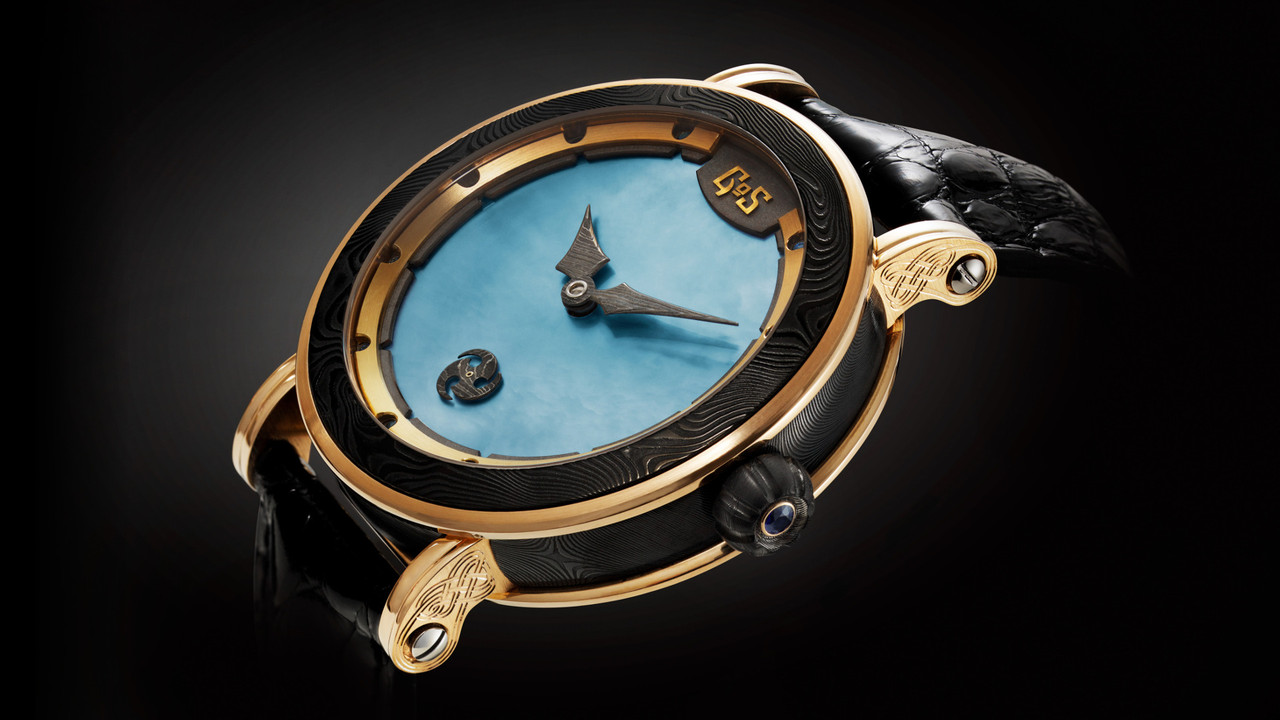 On the front, the index ring has two levels, and combines GoS hallmarks with inspiration from Viking bracelets. The upper ring and the GoS logo are gold plated. Atop the dial are spear-shaped hands with high contrast finishing made from Johan Gustafsson’s Damascus steel, by Patrik Sjögren.

The engraving on both the lugs and movement are by master knife maker Anders Hedlund, who was also responsible for the engraving on the Sarek Trollius. Inspired by Viking shield decoration, both sides of the lugs feature a Viking knot pattern. 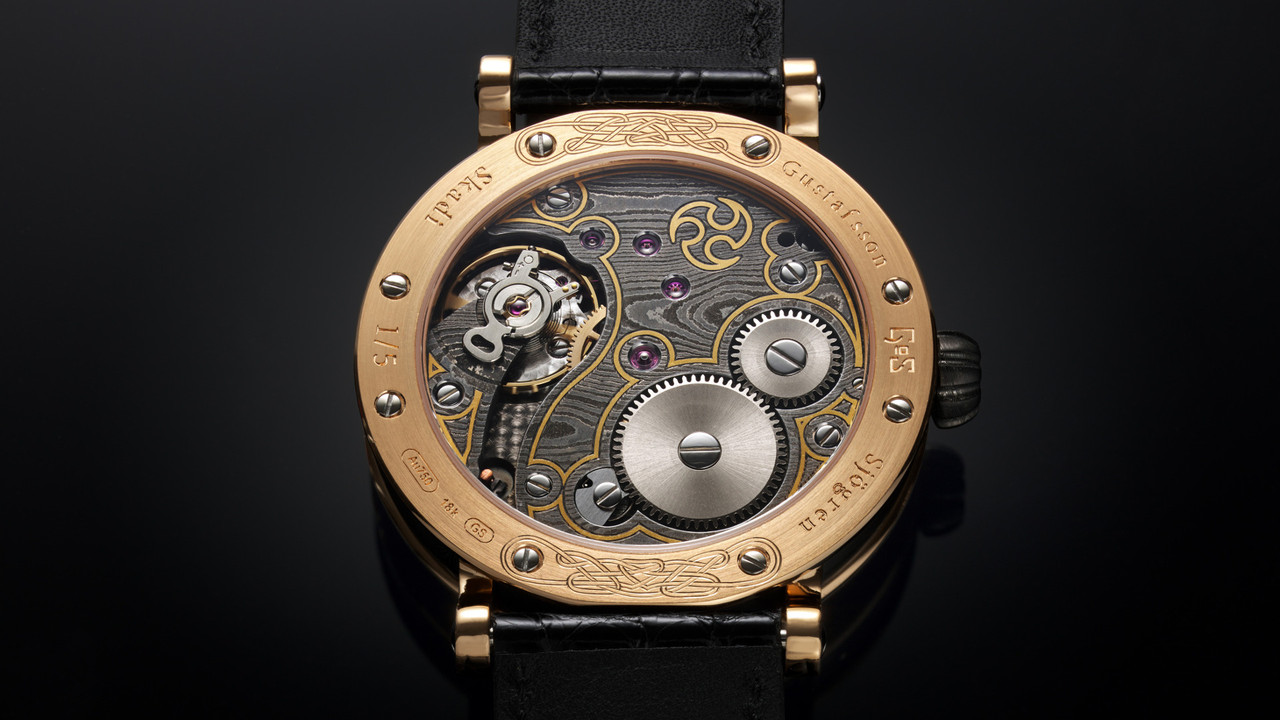 As for the movement, it is a manual-wind ETA 6498 that has been upgraded to chronometer-grade by Soprod, with a 46 hour power reserve. The Damascus steel three-quarter bridge of the movement is manufactured from one solid piece by Gustafsson and finished by Patrik Sjögren to highlight the contrast between it and the engraved bezel. Hedlund’s engraving work is filled with gold for this same contrast reason.

There’s actually a third hand at work on the Skadi – that of master goldsmith Peter deWit. He is responsible for all the 18k gold components of the Skadi and his jewel fitters, for the blue sapphires in the indices and crown.

I mentioned earlier that GoS is very locally focused. The Skadi comes in a presentation box in Swedish Walnut, handcrafted by Kanevad at their Linköping workshop. The strap is not the usual Swedish moose but glossy black Alligator, on a Swiss-made 18k gold deployant. However, if you want Moose, and given the local focus of GoS watches, this would be my choice, that is still an option. 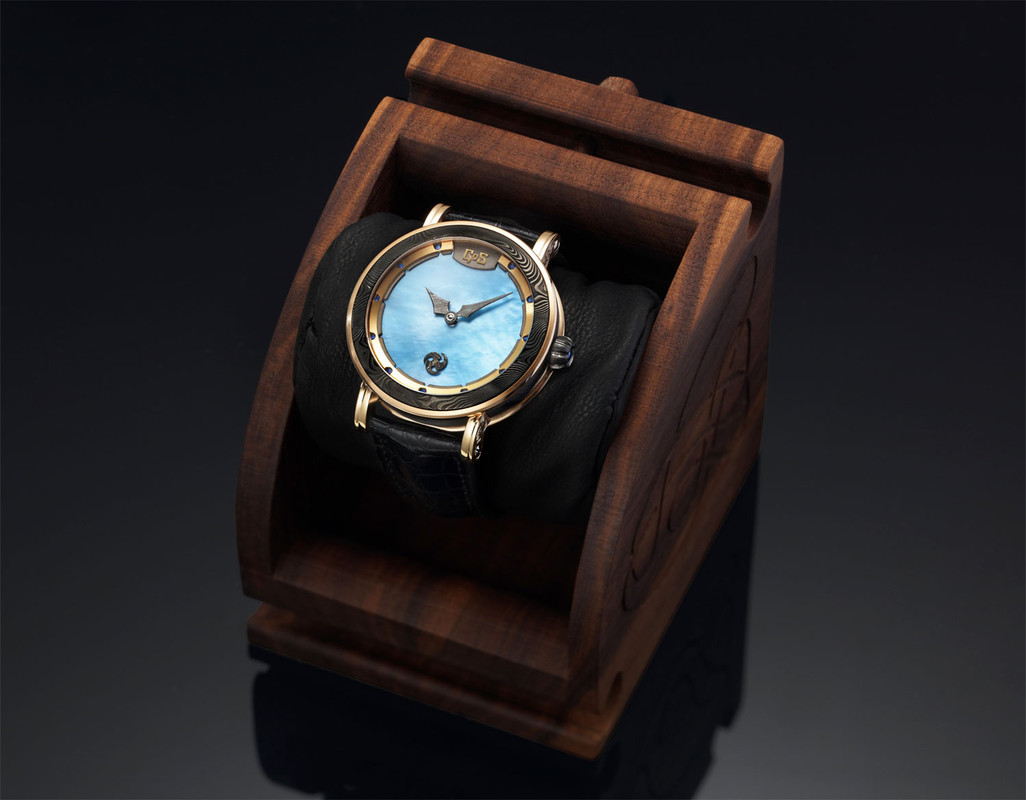 Coming with a five year guarantee, the Skadi is USD 42,000 (excluding taxes). These official photos are of No. 1/5 (they are all individually engraved with their limitation number), which is no longer available. For the remaining four, the estimated delivery times are September 2020 and December 2020, with two pieces at each respective time. To find out more or to place an order, go to this link.

The eponymous goddess of this new model, Skadi (Skaði), is most notably attested to in the ‘Poetic Edda’, and the ‘Heimskringla’ and ‘Prose Edda’ (aka ‘Snorri’s Edda’), the latter two by Icelandic chieftain/ statesman, scholar, poet, and historian Snorri Sturluson (1179 – 1241). The latter is an encyclopaedia of Norse mythology from a compilation of historical sources and oral history that is considered to be a vital reference point for what we know of Norse mythology. The former, about early Norwegian monarchs.

Skadi was the daughter of Thjazi (Þjazi) and married Njörðr, Norse god of the sea and ruler of the winds, but from whom she split. How she came to this first marriage is interesting. Sturluson writes that her father was killed by the gods as punishment for kidnapping Idun and her golden apples. The apples (and Idun) were safely extricated and the gods, thinking that it was all over, went back to Asgard/ Ásgarðr (where the Æsir, or the Norse gods, live).

Well they were wrong.

The goddess was having none of that.

As mentioned earlier, she is often depicted with a bow and arrow for hunting and battle. So into battle she went, to avenge the honour of her dead father. In the battle of wills the gods gave in and offered what was considered commonplace – a blood price, in the form of gold. Skadi had more than enough gold already and deemed it insufficient to recompense her for the loss of her father, so she declined the offer.

They eventually agreed to other forms of compensation – that the gods make her laugh (achieved), the throwing, by Odin, of her father’s eyes into the sky, whereupon they became stars, and finally, a more concrete price – that of a husband from the gods. There was a twist – she had to choose her new husband without seeing his face, only his feet.

The marriage was doomed from the start, and not just because she had hoped to choose Baldur and ended up with Njörðr. A goddess associated with winter, skiing, and the mountains, with a god of the sea? Skadi preferred her father’s place Þrymheimr, in the mountains, whereas Njörðr obviously preferred the sea. So they compromised, agreeing to alternate between their two homes. They lasted half a month.

As a side note, after this failed union, Snorri Sturluson records that Njörðr fathered twins Freyr and Freyja by his unnamed sister-wife.

Mentioned earlier, Sturluson’s ‘Heimskringla’, in which Skadi also appears, is the most famed account of the early Norse kings, covering the period until 1177. Consisting of sixteen sagas, it starts with the Swedish dynasty of the Ynglings, followed by accounts of Norwegian rulers from Harald Fairhair of the 9th century until the death of Eystein Meyla in 1177. The title of this tome dates from 1697 and the first two words of what was, at the time, the only manuscript – “kringla heimsins”, meaning “the circle of the earth”.

Following the Yngling saga, the second saga is that of Halfdanr svarti (‘the Black’), King of Vestfold and of the House of Yngling. He was, in turn, the father of Harald I Fairhair, the first king of a unified Norway. The Fairhair dynasty continued for a further three monarchs after Harald I Fairhair, whereupon the House of Knýtlinga came to rule.

The final king of the Fairhair dynasty was King Haraldr gráfeldr (‘Greycloak’), covered in Sturluson’s fifth saga. After his father’s death in 954, Haraldr and his brothers formed an alliance with their uncle, King Harald ‘Blåtand’ (Bluetooth) Gormsson of Denmark, fighting several battles together against King Haakon I of Norway. It was at one of these, the Battle of Fitjar in 961, that King Haakon I died.

Following his death, Harald Bluetooth declared himself king of Norway, establishing himself as the first king of the House of Knýtlinga but allowing Harald Greycloak to be his (puppet) king in Norway. However, Greycloak’s kingship did not last long, and he was assassinated in 970 by an ally of his uncle. His brothers saw the writing on the wall and fled, leaving Harald Bluetooth in control of Norway and Denmark.

Before the conquering of Norway, Harald Bluetooth had followed the wishes of his father and united Denmark. For those wondering, yes the Bluetooth on your phones/ devices is named after him. He gained this nickname because of a rotten tooth that looked dark blue. Ericsson chose the name of ‘Bluetooth’ as a nod to Harald’s achievement in unification; the name was seen as symbolising an easy ‘unification’ or ease of communication, between phones/ devices. So if you’re reading this post on your phone or any other device with Bluetooth on it at the moment, then you can trace it all the way back to the 10th century.