In 2018 Jaquet Droz released a skeletonised version of its Grande Seconde, a key part of the brand’s offerings since 2002 and inspired by a pocket watch built by Pierre Jaquet Droz in 1748. Even though the movement is open-worked, the Grande Seconde Skelet-One retains the familiar intersecting sub-dials forming a figure eight – a smaller hours and minute counter at 12 o’clock and a ‘grande seconde’ large seconds sub dial on the bottom.

To date it has appeared in white gold, black ceramic, and an anniversary edition in red gold. Now, the Grande Seconde Skelet-One has two new models into the fold – plasma ceramic, and a permanent collection member in red gold. The differences between the two variants aren’t just about material, there is a small size difference as well – 41mm for the Skelet-One Red Gold, and 41.5mm for the Plasma Ceramic (and a thickness difference of 2.30mm vs 12.48mm), but both cases share a water resistance of 30m.

For those unfamiliar with the Skelet-One, the Grand Seconde figure eight is two overlapping sapphire crystal discs held in place by thoroughly modern dark bridges and five screws in either red or white gold. The hour disc has faceted indices in white or red gold, and there are six smaller applied indices on the large seconds disc, along with a slim gold hand with a round counterweight indicates the passing seconds on the track. The hands, hour, minute and seconds hands are either red or white gold. 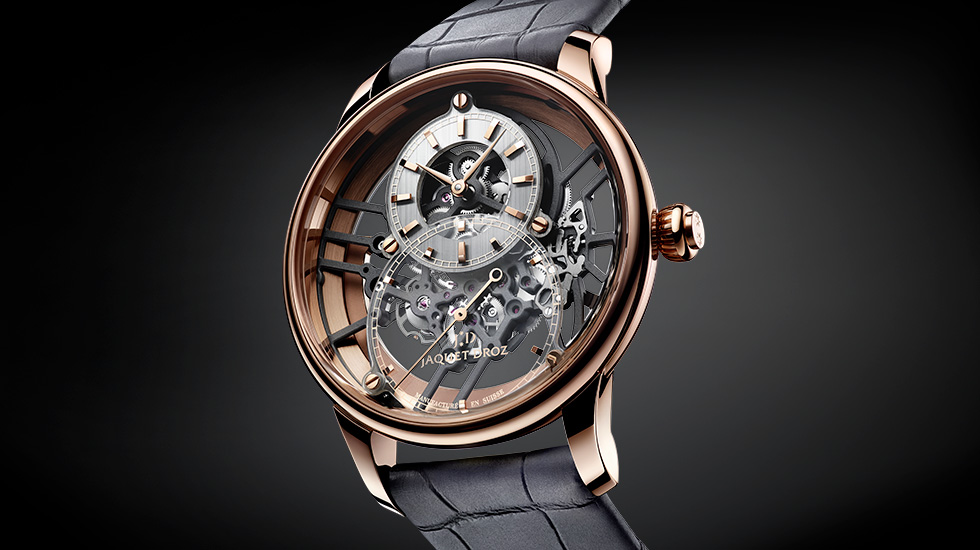 For the new Red Gold, the automatic Jaquet Droz Calibre 2663 SQ (‘SQ’ for ‘squelette’) has been blackened, with an 18k red gold oscillating weight engraved with the watch’s number. For the Skelet-one Plasma Ceramic, there is also the blackened treatment, but the engraved oscillating weight is in white gold. The movement beats at 28,800 VPH and has a power reserve of 68 hours.

The Skelet-One Red Gold’s dial features an hour circle in 18k white gold on the sapphire dial, where as the Plasma Ceramic model’s hour dial has an 18k white gold base with gray treatment. 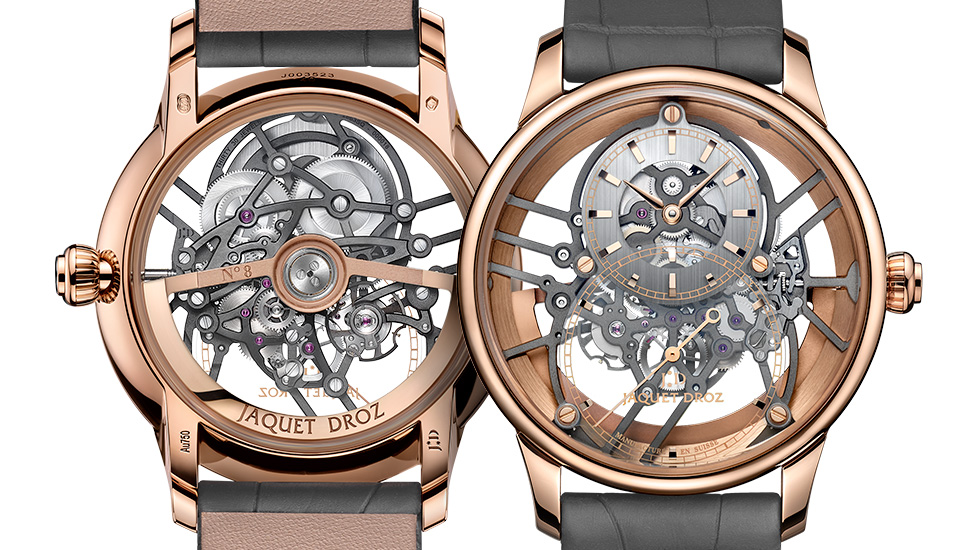 This is the first time that Jaquet Droz has used plasma ceramic for a watch case. Those of you who are familiar with Swatch Group sister brand Rado will know that plasma ceramic features in a number of their collections, notably the HyperChrome and DiaMaster families. It is created from white ceramic being heated in an oven to 20,000°C. The gases at this temperature are what transforms the white ceramic into plasma ceramic. The result retains the lightness, anti-corrosiveness and scratch-resistance of ceramic. 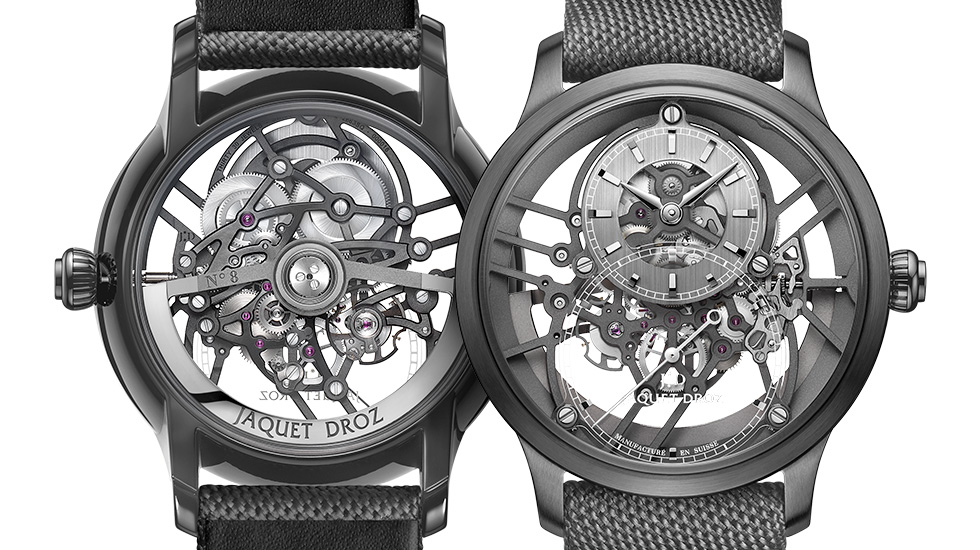 Although the 18k Skelet-One Red Gold, with its combination of brushed and polished finishing, is warmer and provides an interesting traditionalist counterpoint to the less than traditional skeletonisation, I prefer the visual consistency of the Plasma Ceramic model and the thematic coherency between the skeletonisation and the dark anthracite colour of the case.

The Grande Seconde Skelet-One Red Gold comes with an alligator strap with a rubber-like finish and a red gold ardillon buckle. The Plasma Ceramic has a modern grey textile strap with a steel and plasma ceramic folding clasp. The red gold has an RRP of CHF 34,600 and the Plasma Ceramic, CHF 24,300.