Winner of the Mechanical Exception prize at GPHG 2019, the GENUS GNS 1.2 is arguably one of the most unusual watches to have been released not just last year, but in recent times. The man behind it is second generation watchmaker Sébastien Billières.

Firstly, let’s get to the key point – how do you read it? From left to right.

The hours are read at 9 o’clock via a white pointer and twelve satellites. The hour numbers rotate so that they are always the right way up when you look at the watch. 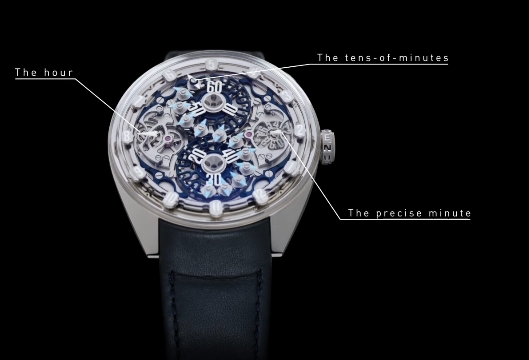 The minutes are spread across two separate indicators. The open main dial of the watch is taken up by a rolling trail of twelve lumed triangles that make a figure of 8 around two blue steel discs set with numerals. This shows the applicable ‘tens of minutes’ at the ‘head’ of the (white) lead travelling indicator, called the ‘Genus’. The trailing ‘tens of minutes’ elements are called ‘genera’, and move on the figure 8 shaped path between two counter rotating wheels. At 3 o’clock is a skeletonised disc that indicates the precise minute via a white arrow pointer. All the numerals and indicators have Super-LumiNova. 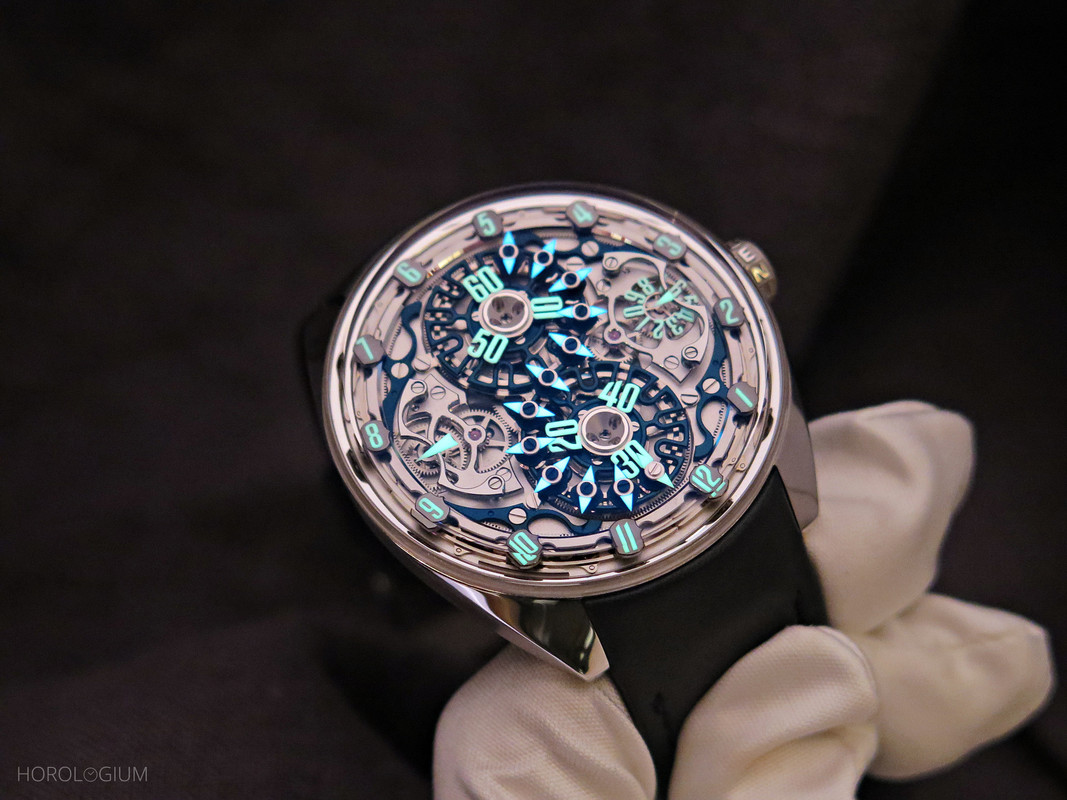 Patents for these two display complications are pending.

Inside the 43mm sized case is the in-house manual-wind Calibre 160W-1.2, made of 18k gold. It beats at 18,800VPH and has a power reserve of 50 hours. The main base plate is in two parts and separates energy regulation and distribution, from transmission. 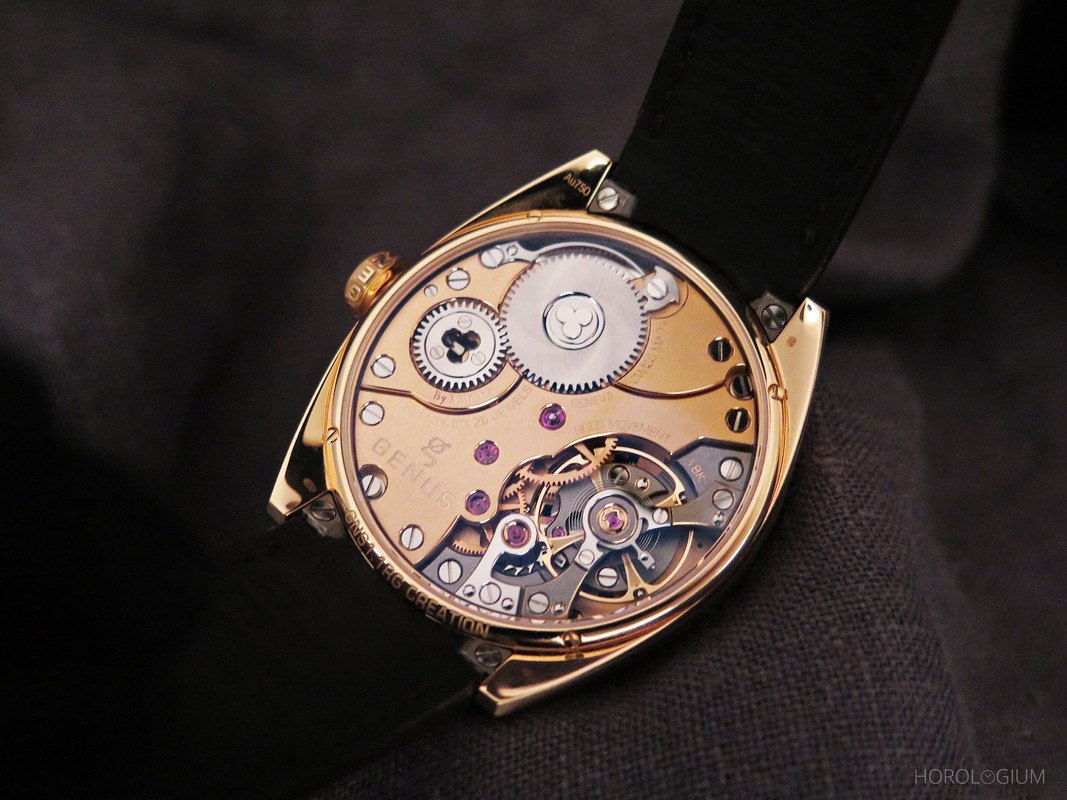 Watchmaker Sébastien Billières, who co-founded GENUS with business partner Catherine Henry, joined Roger Dubuis after obtaining his CFC in 1999, subsequently working with Felix Baumgartner and Harry Winston (where he was part of the team working on Opus V).

In 2006 Billières joined IFAGE, the Foundation for Adult Education in Geneva, to broaden the scope of its watchmaking curriculum. Still a part of the Foundation, he is the Chairman of the departments he created, and still teaches there. A year later he co-founded GMTI, a company focusing on movement development, providing mechanisms and complications for brands, specialising in ‘Poinçon de Genève’ calibres.

Meanwhile, he worked on GENUS, and this watch is the result of a decade’s worth of research and three years of development. As a first watch it is mind boggling in an of itself, but it also managed to win a prize at the GPHG 2019 as well.

This is a very intriguing watch, and it is not without good reason that it has been acknowledged this way. There is naturally a bit of initial confusion as to how to tell the time; this requires a bit of concentration or alternatively, a quick explanation (in our case, by Pamela Clouthier of GENUS). The open nature of the dial means that legibility may be an issue for some.

Coming on a dark blue calfskin strap (with the leather having certified traceability), the pin buckle is in 18k gold and engraved with the GENUS logo.

These are in limited editions of 8 pieces in three variants, with the listed prices from the website as follows : 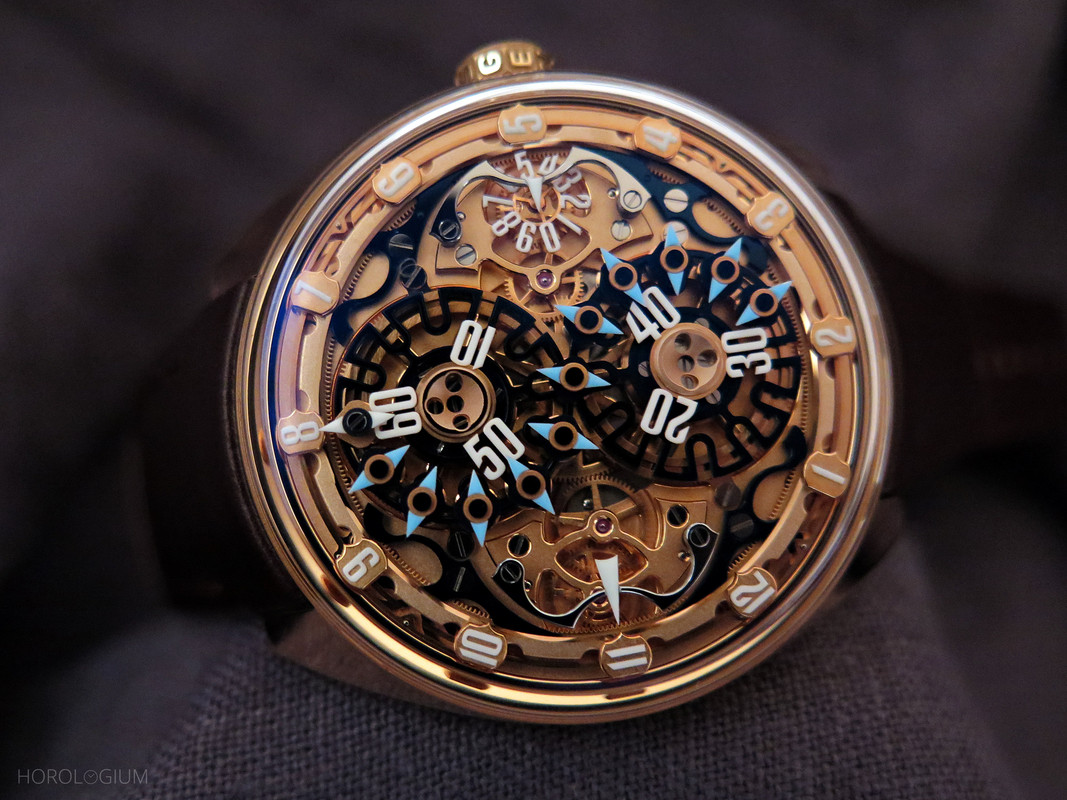 The case, movement main plate, bridges, and buckle are made of ethically sourced 18K gold, certified by the Responsible Jewellery Council (RJC).

To contact the brand, go to their website at this link, but if the opportunity arises to see it, grab it. From conception to realisation this is an exceptionally unusual watch and worth spending time with.