Earlier this year the Miami International Boat Show provided the rather appropriate backdrop for official show partner Ulysse Nardin to unveil the Marine Mega Yacht Watch, a tidal indication timepiece aimed at the mega yacht owners amongst us. One of the finalists in the ‘Calendar and Astronomy’ category of the GPHG 2019, it recently paid a brief visit to Sydney, during which we managed to see it.

A follow-up of the Marine Grand Deck Tourbillon of 2016, this platinum-cased watch features a grand feu enamel dial (to represent the sea), a one-minute flying tourbillon at 6 o’clock complete with propeller decoration, linked moon phase and tide indicators, and an anchor themed power reserve indicator.

The moon at 9 o’clock has a 3D photo-realistic representation of the moon’s surface, with one half of the sphere treated in blue PVD for the period of the new moon and the other rhodium-coated for the full moon. Connected to the moon phase function is a tide indicator at an aperture at 8 o’clock which displays the height of the tides as well as indicating the seasonal coefficients as they relate to the place the wearer selects. 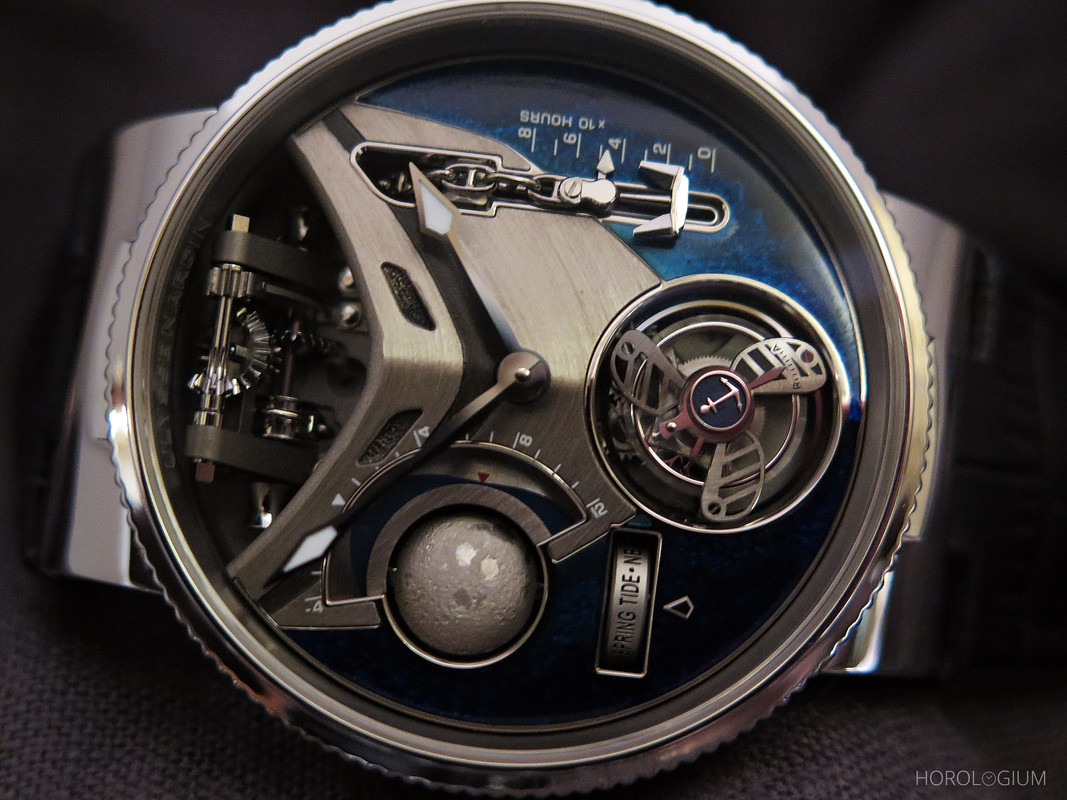 The watch’s manual-winding and power reserve are a patent-pending pulley-and-design system simulating the raising and dropping of the anchor, moving when the crown is wound. The power reserve (80 hours), as indicated by the anchor, is linked to a chain by an anchor ring. The chain is linked to a miniature windlass winch built into the movement and visible in a large aperture at 12 o’clock. Connected by wheels to the winding mechanism, it raises the anchor from a horological mooring dock numbered from 0 to 8 on a horizontal scale as the watch is wound, and the anchor lowers as the mainspring runs down. 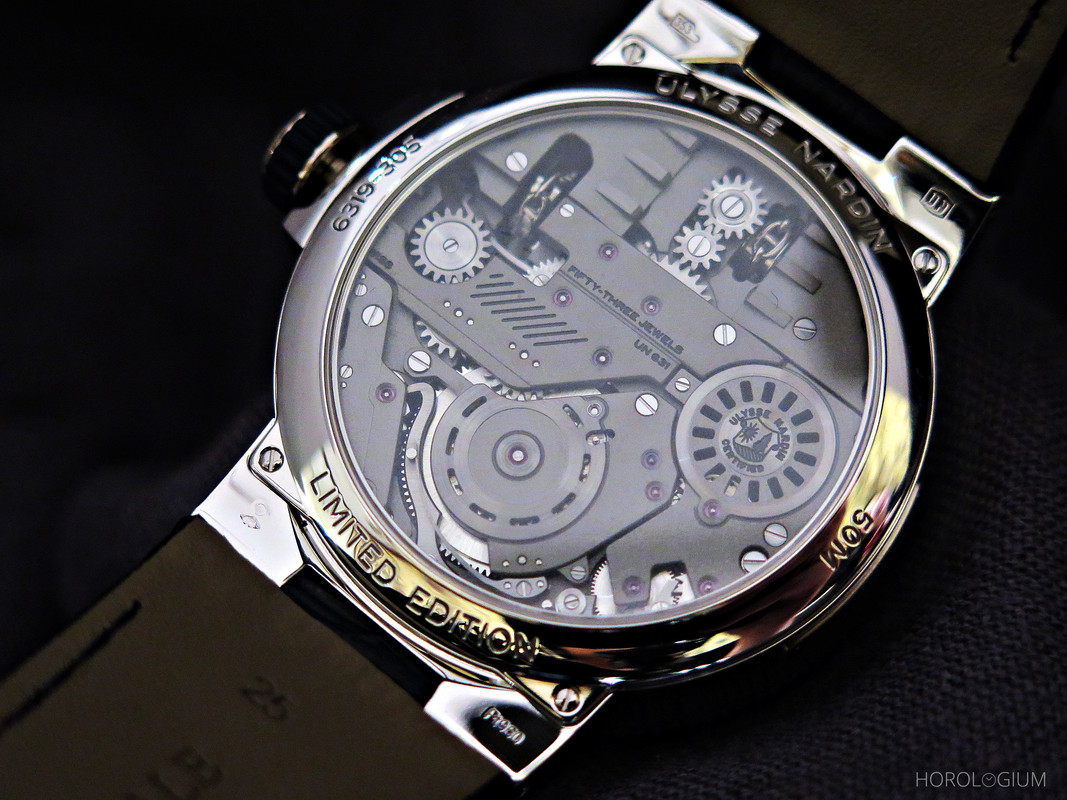 To create the new movement that powers all these functions, Ulysse Nardin worked with Christophe Claret. Visible through the open case back, the UN-631 is intended to look like a ship’s engine, and beats at 21,600VPH.

When setting functions, a window on the side of the case shows the position of the crown – ‘S’ is for time, ‘W’ for winding, and ‘T/M’ for when you wish to set the tide and moon phase. It is designed to reference an Engine Order Telegraph which, as the name states, is how orders about changes in speed or direction are telegraphed (communicated) from the bridge to the engine control room. The moon phase and tide volume are set by turning the crown counter-clockwise (one turn of the crown is four days), whereas clockwise winding sets the level of the tide depending on location (one turn of the crown represents a 0.25 turn of the disc, equivalent to 9.5 hours). 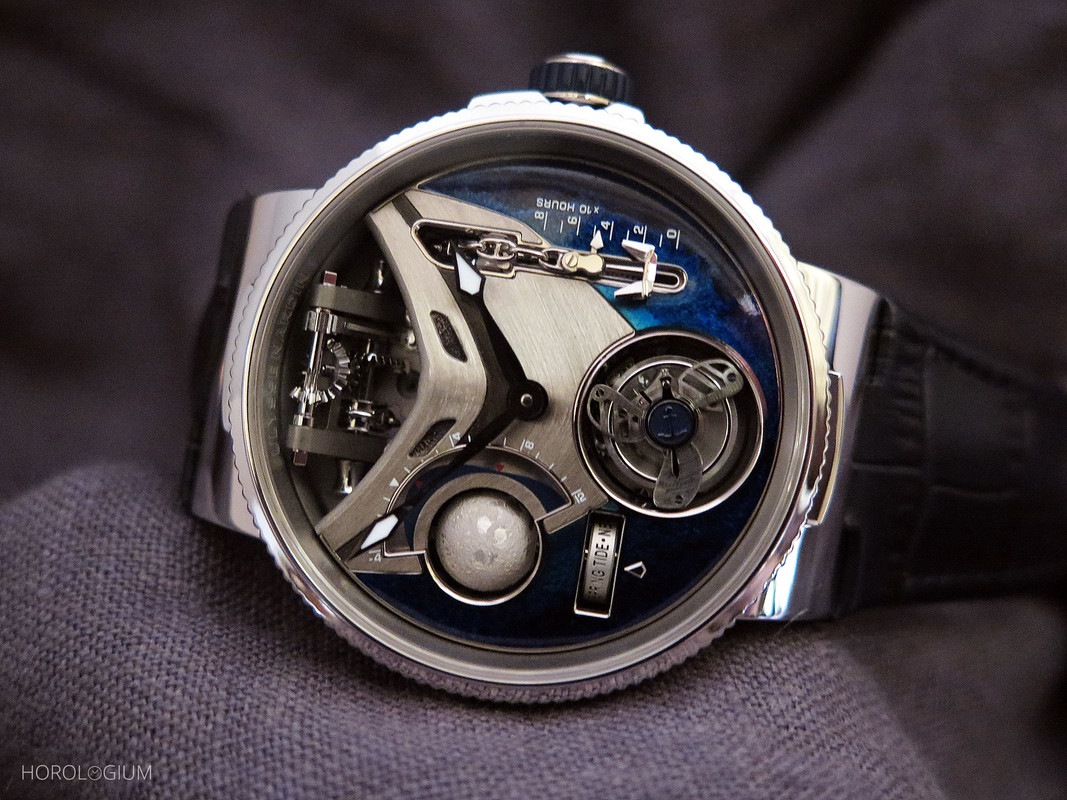 The watch’s theme is impossible to miss. Visually arresting because of the design choices, indicators, and unusual tide complication, at 14.5mm thick this 44mm sized watch is big in presence and with the metal choice, hefty. But I guess that if you own a mega yacht, you are probably quite comfortable with standing out.

The Marine Mega Yacht Ref. 6319-305 has a limitation of 30 pieces and an RRP of USD 310,000. With climate change already affecting Florida including regular flooding in Miami and the state’s tides increasingly problematic for residents, launching this piece amidst Floridian mega yacht owners made sense. If you are interested, the Miami Dade County website has information about its Sea Level Rise Strategy.

The full list of winners for the GPHG 2019 can be found at this link.