Earlier this year we mentioned that 2019 marks two decades since the commercial launch of Seiko’s Spring Drive movement (a limited edition Credor in 1999), and that they have released a number of new models to mark the occasion.

Today we are looking at another of these, from the Grand Seiko Elegance Collection, called the Spring Drive SBGA407 ‘Snowflake blue’.

This new piece marks the first time that he popular textured ‘Snowflake’ dial, inspired by the winters of the Shinshu region (the birthplace of the Spring Drive), has a light pale blue colour. It should be noted that there was a blue-dialled Grand Seiko released in 2018 that was a U.S. Market limited edition (558 pieces) called the SBGA387 which featured a textured dial inspired by the Japanese painting technique Kira-zuri, and whose colour is a nod to the blue skies over the Sea of Japan.

Since the Grand Seiko Spring Drive SBGA011 (today the SBGA211) ‘Snowflake’ of 2010 the brand has been sparing with their ‘Snowflakes’, and is their wont, they have not been characterised by dramatic differences. One notable difference has been this year’s SBGZ001 model, which we mentioned previously, that has taken the Snowflake theme and snowdrift texture beyond the dial to the case.

Firstly, let’s look at the new dial. ‘In the metal’ the blue is softer than in Grand Seiko’s photos, or in fact my photos here. I’ve noted a number of times already that 2019 has seen a lot of blue dials. Amongst the many choices available for consideration this year, this is one that stands out from the others. Not just because of its lightness of colour, but also because of the effect of the ‘Snowflake’ texture on how the colour appears to the eye (or under the loupe).

It would be remiss of me to not mention the power reserve indicator. It is as per the previous models, but not everyone wants this feature on the dial side, and the blue colour makes it more obvious than its differently hued predecessors. Another thing that long time readers may have noted is a preference for continuity of colour between a dial and a date ring. In the SBGA407 the date ring is white, but because of the light shade of blue, combined with the framing of the date window, the colour difference/ contrast is not marked. 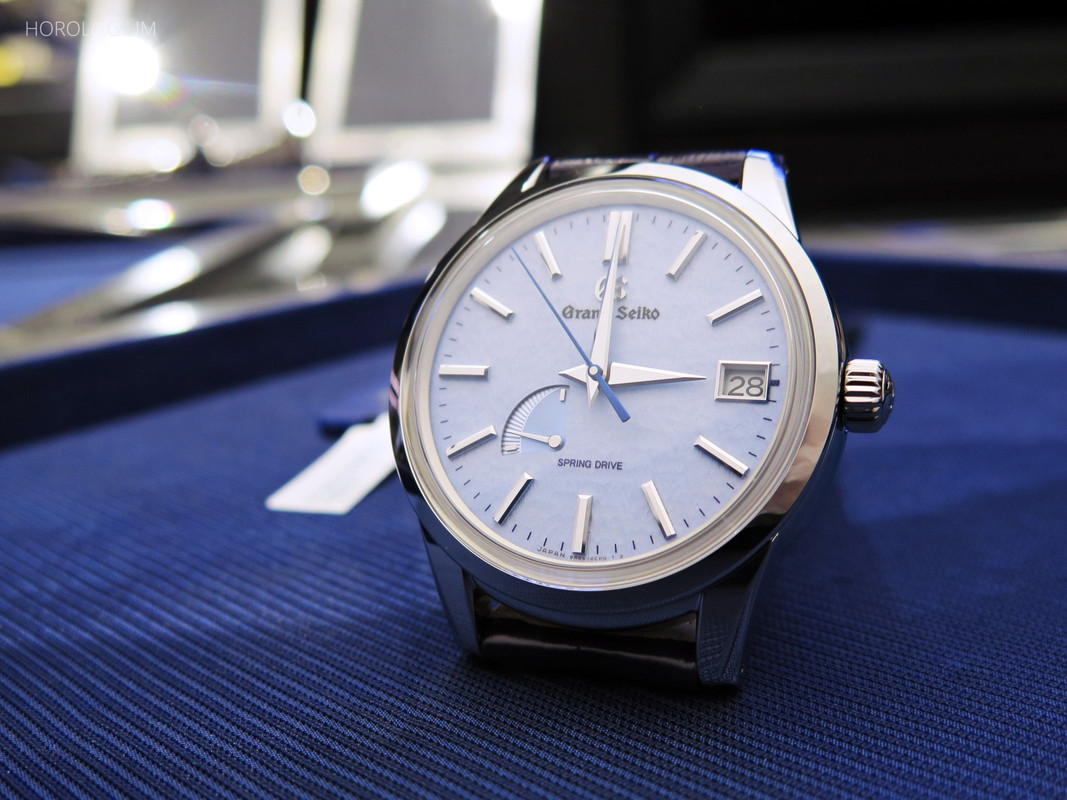 Along with a blue stainless steel seconds hand, the dauphine-styled hour and minute hands are the same as the earliest Snowflake, but if you look carefully, you will see that the applied hour markers have changed. The tapered markers of the 6, 9 and 12 o’clock of the current SBGA211/ SBGA201/ SBGA259 variants have been replaced by rectangular markers. This was also the case with the U.S. limited edition model I mentioned earlier. Whether this change is a good one or not is purely a matter of personal taste.

The hands, inside of the bezel and case all feature what Seiko called ‘Zaratsu’ polishing, which gives them a mirror shine.

As well as coming in steel (and not the more common titanium), the new Snowflake is also slightly smaller (40.2mm versus 41mm of its siblings), slightly thicker (12.8mm versus 12.5mm) and, unusually for Grand Seiko, it comes on a (Crocodile) strap instead of a bracelet. Water resistance is 10 bar. 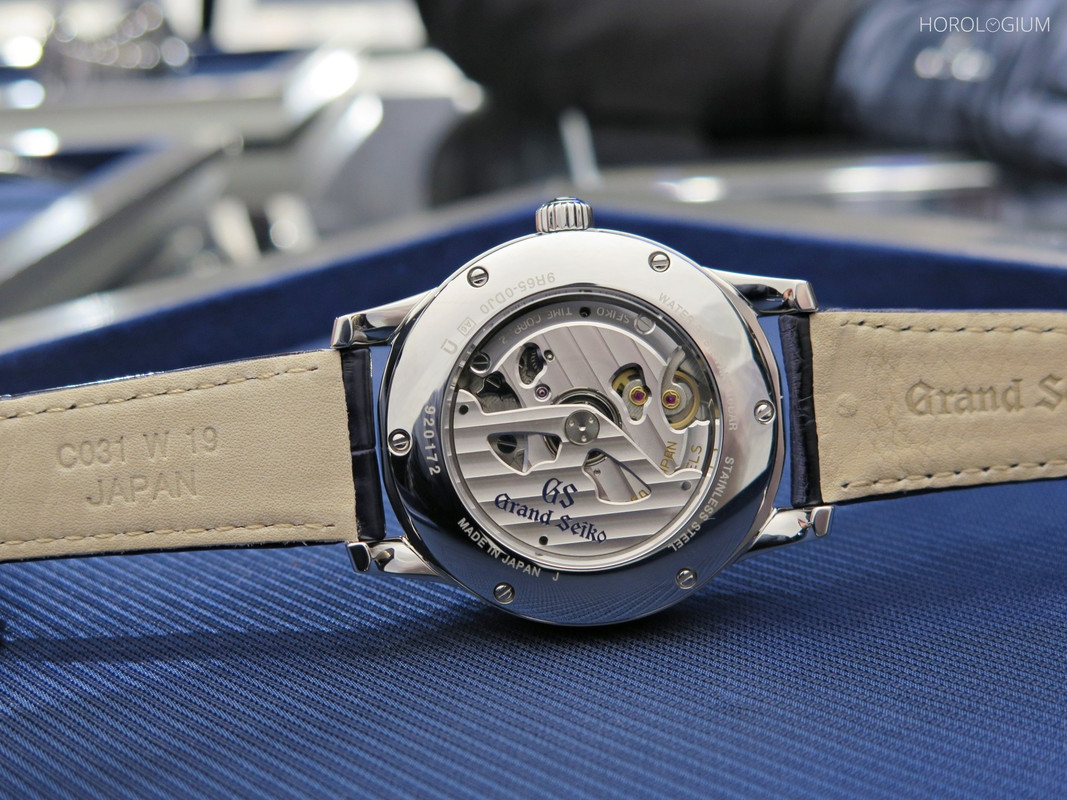 One thing that hasn’t changed is the Calibre 9R65 Spring Drive movement. With a power reserve of seventy-two hours, the accuracy is ±1 second per day / ±15 seconds per month (average).

The Blue Snowflake has a different tone to the others, not just because of the colour and strap, but also because of the changes to the indices and importantly, the tweaks to the case design, lugs, and the more rounded crown shape. These changes mark a clear differentiation for this model compared to the other Snowflakes, and it makes this new watch feel far more dressy. The Snowflake family identifiers are there, but it is distinctive enough to make it a watch that can be added as a discrete (rather than mere colour variant) addition to a Snowflake collection. To look at under varied lighting conditions and at different angles, it combines the interest of the dial texture with the interest of having a blue dial that is slightly different under different types of illumination. 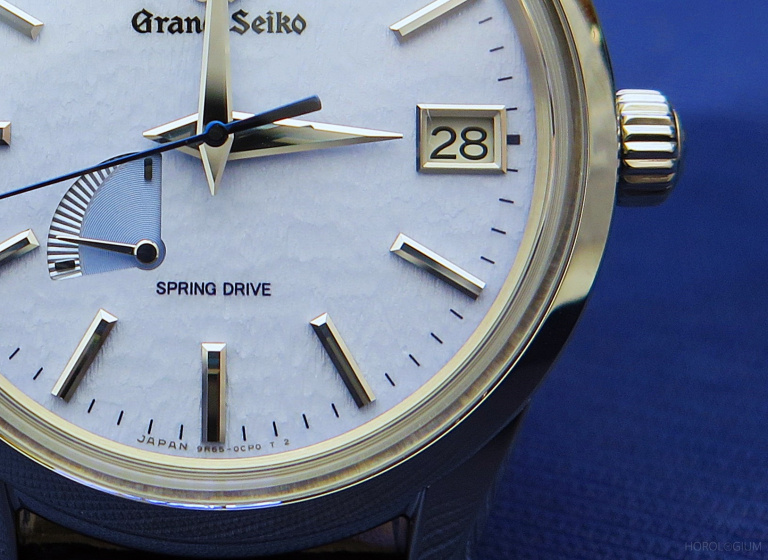 With a price on par with the other Snowflakes, the SBGA407 is probably aimed at Grand Seiko Snowflake fans who want something more dressy, in stainless steel, or who are simply taken by the blue dial.