The Austrian brand Habring², founded by Maria and Richard Habring in 2004, is marking its 15th birthday with a new model, and its most complicated to date. The Perpetual-Doppel features a monopusher split second chronograph combined with a perpetual calendar.

The genesis of their GPHG award-winning Doppel 2.0 lies a couple of decades ago when Richard Habring was at IWC and created the world’s first affordable split-seconds chronograph, the IWC Doppelchronograph (Ref. 3711) by adapting the workhorse Valjoux 7750 movement. It was revolutionary because he democratised the ability to time two events with the same chronograph, which had previously been a far more complex and pricey watchmaking affair.

A basic chronograph keeps track of elapsed seconds, minutes and sometimes hours, through the use of pushers. Upon activation, the seconds hands starts. With a double chronograph, the centre seconds hand is overlaid by another hand which moves simultaneously. In order to time a second event, the user presses the pusher on the left side of the case which stops the second sweep hand, thereby displaying the elapsed time instantly whilst the main seconds hand continues to run until stopped. Pressing the left-side pusher again causes the stopped hand to catch up to the running seconds so that they move in unison once more.

The expiration of the doppelchronograph patent in 2012 meant that Richard Habring was now freed to use his creation, in the form of the dual register Doppel 2.0, which contained the Calibre A08MR, still based on the Valjoux 7750with a dial layout change and a simplified bridge layout. Last year saw the launch of the Doppel-Felix, a split seconds chronograph based on an in-house movement. It too, was a GPHG winner. 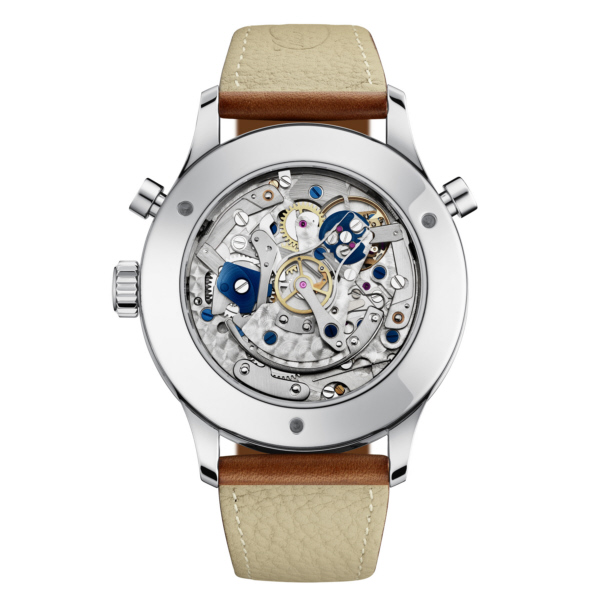 The Doppel-Felix forms the base of the new model, onto which is the addition of a perpetual calendar module, courtesy of Dubois-Depraz in the Vallé de Joux, creating the manual-wind Calibre A11P. It beats at 28,800VPH and has a power reserve of forty-eight hours. The movement is hand finished, with polished bevels, decorative grinding, and perlage.

Functionally, along with the hours and minutes there is the date, day of the week, month with leap year indication, moon phase, and a monopusher split second chronograph with a 30 minute counter at 12 o’clock.

It comes in two variants, silver or blue. The former is the ‘key’ colour so to speak, and its dial is silver galvanized metal, with rose gold Arabic numerals for the hours and diamond-cut red gold hands for the time. The other hands are blued steel. There are four sunken sub dials for the calendar functions, with the leap year embedded into the month register. The moon phase at 12 o’ clock includes a 30 minute chronograph counter. 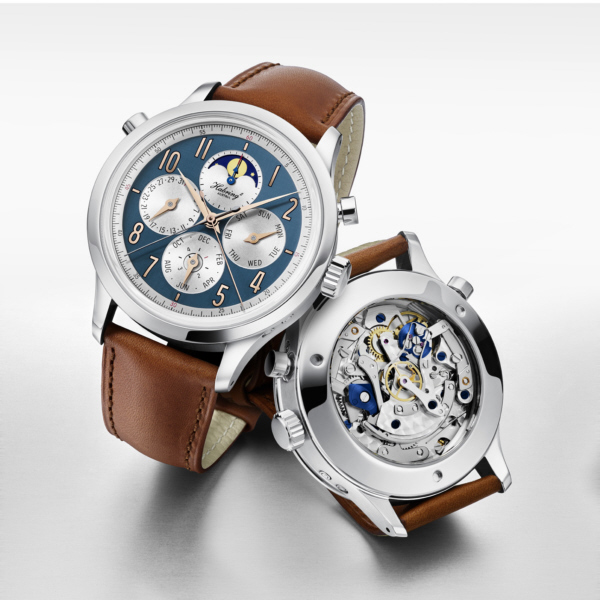 As for the case, it is stainless steel, 43mm (12mm thick), and made by fellow Austrian company Böhler Steel. Both the dial and case back have domed anti-reflective sapphire crystals. The pusher at 2 o’clock is used to start, stop and reset the chronograph, whilst the pusher at 11 o’clock activates the split second (rattrapante) function.

With a price of 21,500 EUR, the Perpetual-Doppel is numbered, with the serial number situated between the lugs at 6 o’clock.