Historically significant figures in English watchmaking such as Tompion, Mudge, Arnold, Earnshaw and Harrison are well known amongst watch and clock enthusiasts. Their works are in museums and significant collections, and if their pieces come up for sale, they command both interest and high prices.

English watchmaking in its modern form, perhaps most well known courtesy of George Daniels, Derek Pratt, Roger Smith and more recently Rebecca Struthers and the old-but-new-again brand of the moment, Frodsham may lack the marketing reach of Swiss watchmaking, but apart from those brands and watchmakers who have loomed largest in recent times, there is also a name which has been quietly influential, that of Peter Roberts.

I cannot remember when #thewatchnerd first told me about Peter Roberts, but I do remember him telling me of the announcement of the Grand Complication 5 ‘Concentrique’ in 2012.

Roberts started his watchmaking career as the first student from England to attend undertake WOSTEP in Neuchâtel, followed by time with IWC in Schaffhausen, Rolex (including the position of Official Watchmaker for Rolex England), and Head of Showroom Repairs at Garrard in London and Watches of Switzerland.

His significant behind-the-scenes influence has been through the thirteen years he spent teaching at Hackney College after having been with these brands and retailers. In more recent times he has also spent some time as Technical Director at English brand Bremont, who themselves have been admirably building up their manufacturing facilities in England. Amongst the many English watchmakers Peter Roberts has taught have been familiar names such as Stephen Forsey, Simon Michelmayr, Richard Stenning of Frodsham, and Peter Speake-Marin. 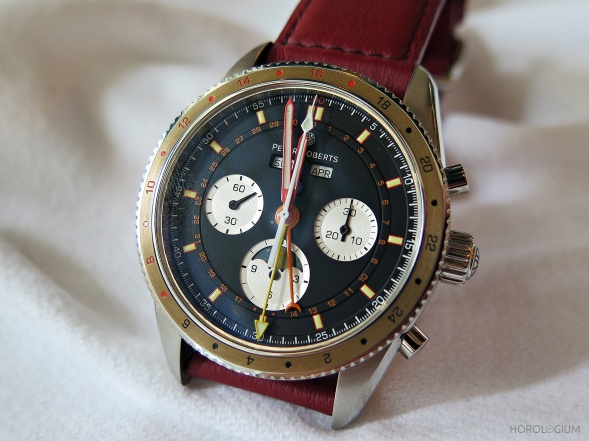 Launched in 2013, the original intention was to have a limited production run of forty pieces of the Grand Complication 5, but in the end it ended up being twenty-five, which makes them all the more scarce. As such, it was a surprise to us when we first saw one, nonchalantly sitting on the wrist of its owner during an SIHH a couple of years ago. Unfortunately we did not get to spend much time with it at the time, and it was not until this year that I had the opportunity to properly handle, and photograph, one.

As the name indicates, the Grand Complication 5 is a chronograph featuring five hands, with the functions of hours, minutes, subsidiary seconds, day, date, month, second time zone, and moon phase, as well as the chronograph. All the hands are co-axially mounted at the centre, with functions displayed via sub dials and apertures.

The reason that this watch was the first to bear his name has its roots back in the beginning of Roberts’ career. Whilst studying in Neuchâtel he saw a similar watch in a book, but was informed that at that point, one had never been made. His interest and intellectual challenge piqued, he set out to create it using a Valjoux 726 movement, thus making the original (chronometer certified) Concentrique with five hands in 1972. It was not just his ‘school watch’ for WOSTEP, but it was also the first wristwatch with five hands.

After this, Roberts had a varied and successful career, including Fellowship of the British Horological Institute, but the idea of making another Concentrique remained at the back of his mind. However, these movements were/ are scarce, and it wasn’t until decades later that he managed to source a small batch of new old stock (NOS) Valjoux 88 movements.

The Valjoux 88 is a complicated (added calendar and moon phase) relative of the celebrated Valjoux 72, with its column wheel heritage intact. Itself a descendant of the Valjoux 22 movement, the Valjoux 72 first appeared in 1938 and ceased production in 1974 after an incredible run of some three-quarters of a million movements. Vintage chronograph aficionados often say that the 72 might be the best manual-wind chronograph movement made, and it found its way into a wide variety of models and brands, including the Rolex Daytona and Breitling Navitimer. 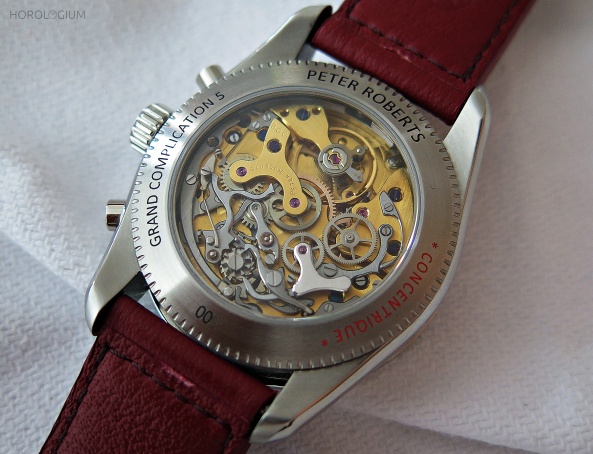 In the Concentrique, the manual-wind Valjoux 88 base calibre, with its 19 jewels and power reserve of forty-six hours, has been extensively reworked, and is shown off beneath a sapphire case back. It is hand-finished with polished and brushed surfaces, graining, mirror-polishing, circular graining, and hand-bevelling. With a mix of steel and brass, the bridges are gold-plated.

In going back to the functions that this movement powers, Peter Roberts chose differently coloured hands for each, to aid legibility. All hands bar the date indication feature Super-LumiNova.

The hours and minutes hands are red, with green lume. The central chronograph seconds hand is white, the second time zone hand is yellow, the date hand orange, and running seconds/ minute and hour totalisers black. 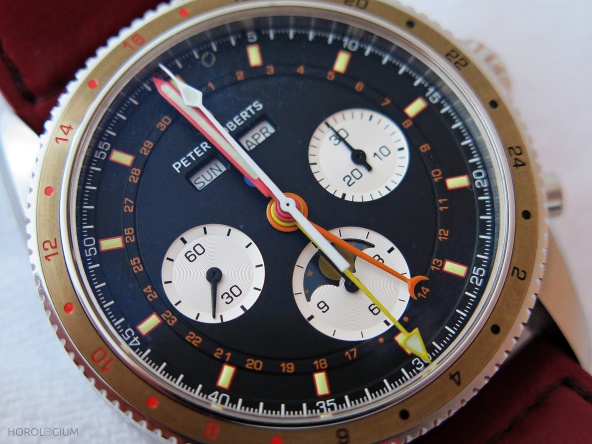 The dial has a tricompax layout. As a contrast to the black of the main dial, all sub dials are silver, with snailed centres. Beneath the Peter Roberts name at 12 o’clock are two apertures which display the day and month. At 3 o’clock is the 30-minute chronograph counter, a 12-hour hour chronograph register is situated at 6 o’clock and includes the moon phase indication, and the small seconds is at 9 o’clock.

The date ring, in orange to match its indicator hand, encircles the inner portion of the dial just below the hour markers.

The bezel of this 42mm sized stainless steel case features a bronze inlay and is marked with a 24-hour scale. Water resistance is 100m. The strap is hand-stitched brown calf with a pin buckle with Peter Robert’s logo. 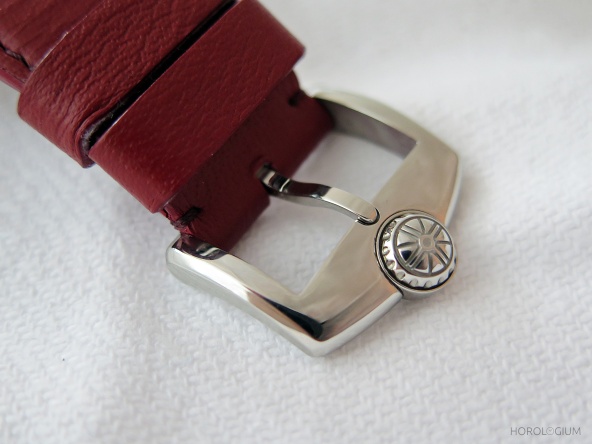 The Grand Complication 5 ‘Concentrique’ was the realisation of a long-held dream by Peter Roberts. They were niche at the time, snapped up by Roberts’ friends and long time admirers, and thus unlikely to be let go. These are like hen’s teeth, and I had thought that it would take this watch’s owner a couple of more years before he would manage to find one.

Which brings us to why this piece forms a part of this collection, and of the reason for its appeal. It is about horology, about Peter Roberts and his position.

The Concentrique is not about dial design or decoration; form follows, to a significant degree, function, even for design choices such as the hand colours. The decision to use the Valjoux 88 is of note not just from the historical perspective of this calibre, but because it is a direct nod to his original 1972 ‘school watch’, which was the first wristwatch to feature this five-handed functionality. This is a very personal watch for its maker.

The watch featured in this post is part of a growing collection of timepieces by an admirer and student of English watchmaking. With English watches historically known as being more classically styled, the ‘sports chronograph’ look of the Concentrique stands out amongst the current offerings of both English and independent watches. It is this aesthetic which makes it a discreet watch as well. On a wrist, at a glance, its horological interest may not be immediately evident. It is only when you handle it, notice that there are five hands and then flip it over, do you realise that this is no ordinary chronograph.

It is also, as I realised during my time with it, a watch that grows on you.

If you find the technical aspects of the Grand Complication 5 of interest then the De Bethune Maxichrono may also pique your curiosity.

As a final piece of trivia, if you ever get your hands on a Jaeger-LeCoultre 101 and find a ‘PR’ service mark inside, that was the one worn by Queen Elizabeth II.

The Roberts connection to watchmaking is continuing through son James, who is also a watchmaker and works in the family business.