Recently, Sydney saw the launch of Swiss brand Schwarz Etienne, entering the Australian watch market for the first time courtesy of their new authorised dealer Fairfax & Roberts, who invited me to one of their launch events.

Founded in 1902 by Paul Arthur Schwarz and his wife Olga Etienne, it has been historically better known as the maker of movements for other brands, but its acquisition in 2003 by Raffaello Radicchi lead to a change in direction to focus on the development and production of movements under their own name. Of particular note is that they are also making their own hairsprings via sister company E20.

Now making between 280 and 300 pieces per annum, they presented a number of their current collection in Sydney, but the standout piece was one that was launched at Baselworld 2017, a tourbillion with a retrograde seconds called the La Chaux-de-Fonds Petite Seconde Rétrograde Tourbillon.

This, the most complex of their current models, comes in a number of variants; one in a rose gold case with Hematite Specularite on the dial, a stainless steel case with Lapis Lazuli, a white gold version with blue opal, and the one that was presented at this event, a stainless steel cased model with green aventurine. All are the same 44mm sized case, with a height of 13.70mm. 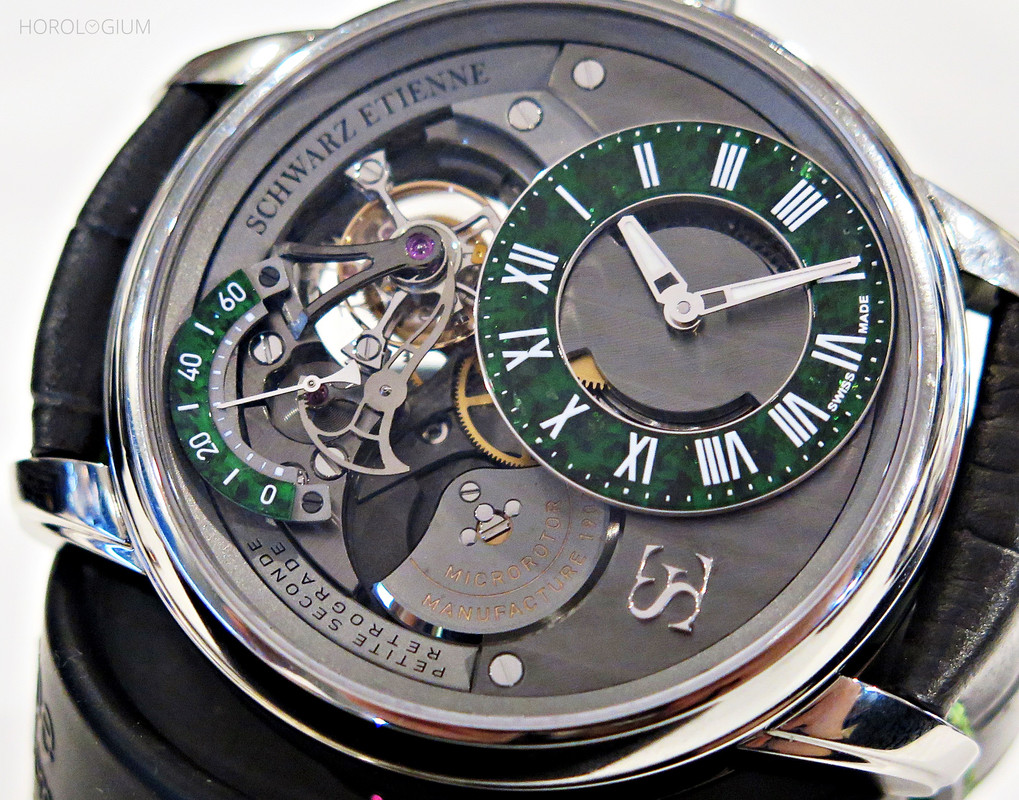 An off-centred hour and minutes display dominates the lower portion of the dial at 5 o’clock, and it is the track of this, in striking green aventurine in this example, that is one of the two features that is differently constituted between the model variants. With its Roman numerals, the centre of the hour and minutes display is open-worked, opening up to allow a visual of the bridge below. The rhodium-treated brass hour and minute hands have Super-LumiNova. 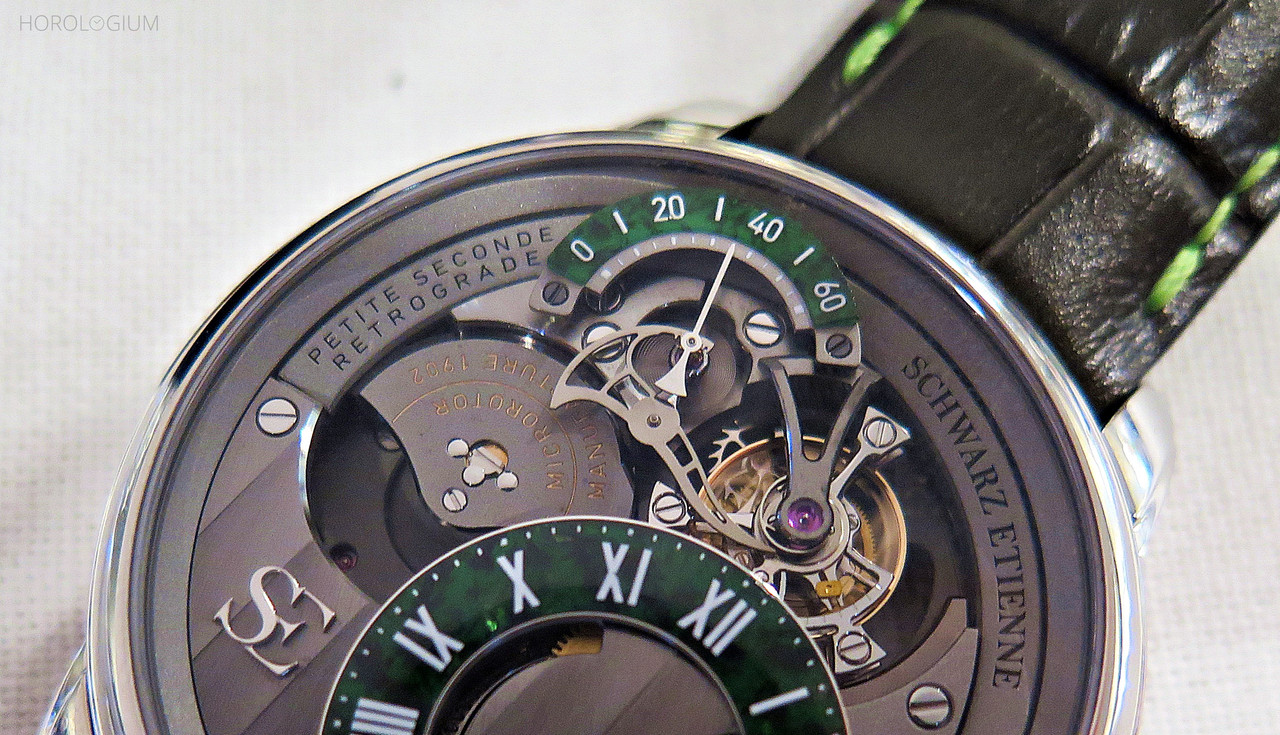 The retrograde seconds of the name, an aventurine arc, is at the top left of the dial. The one minute tourbillon at 1 o’clock into which it is incorporated rotates in an unusual anti-clockwise direction. Schwarz Etienne have described this as ‘irreversible’. Its mechanism is built directly in connection with the tourbillon. A snail cam is mounted on the tourbillon arbor onto which a ratchet gear rests, while the system is tensioned with a spring. This mechanism is what operates the seconds hand and the retrograde movement.

Along with the time indication, the bottom half of the dial also consists of a large bridge adorned with Côtes de Genéve decoration. 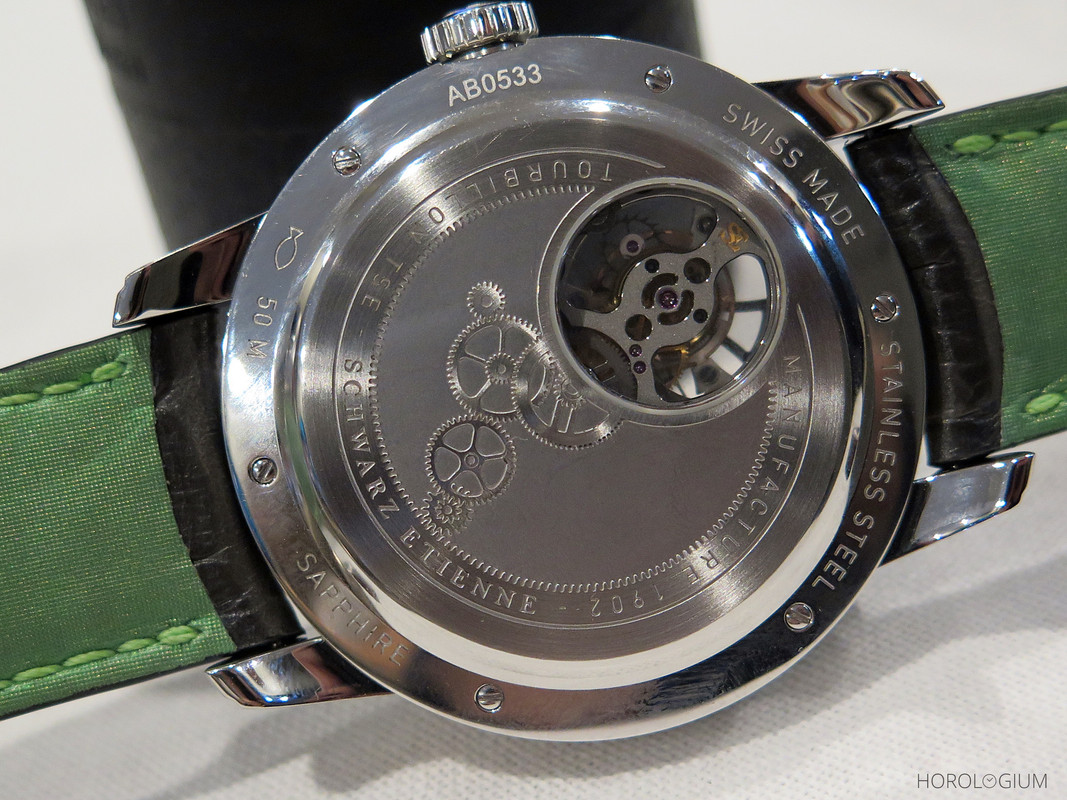 Visible (and powering this) is the in-house automatic Calibre TSE PSR 122.00, with a micro-rotor and the balance wheel featuring an ‘SE’. It has a sandblasted finish, with hand chamfering of the bridges. It beats at 21,600VPH (3Hz) and has a power reserve of 72 hours.

The case back features an unusual but attractive engraving of gears that are obscured by the back, as well as an opening for the tourbillon.

The Petite Seconde Rétrograde Tourbillon comes on an alligator strap with a folding buckle in stainless steel with the Schwarz Etienne logo.