It can be argued, with some degree of justification I think, that one of the standout (in the literal sense of its prominence) watches of 2017 has been Konstantin Chaykin’s Joker, launched at Baselworld this year. With an unconventional take on a form of time display that is traditionally used in a more sedate manner, it seemed to capture the imagination of many. A limited edition of 99 pieces, it was sold out by the end of the fair.

Chaykin is the only Russian AHCI member, with the Carpe Diem and remarkable cinema watch amongst his most well known watches. However, the Joker seems to have catapulted him to wider fame beyond that of the world of independent watch aficionados.

At the time of its launch I was not one of the many watch lovers who got excited about it. I generally don’t find myself instinctively drawn to Jokers as decorative devices, and I wasn’t sure if the novelty of such a watch would wear off after a couple of days. I didn’t dislike it, I just wasn’t as exuberant about it as so many others were.

The first (and only?) Joker arrived in Australia not too long ago. Back in March, I had shared some of my thoughts with the owner of the watch photographed in this post, so when he got it, he gave me the opportunity to spend some time with it so I could see if it held up to my preconceptions. 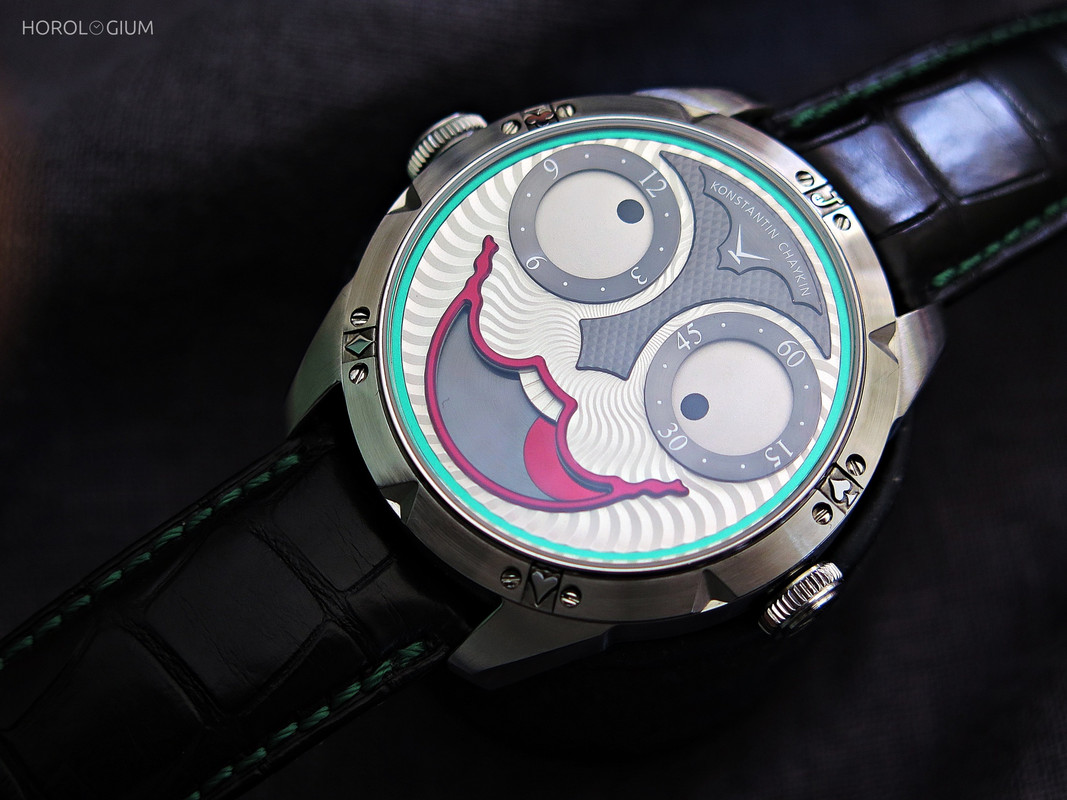 The Joker is all about its face with the constantly changing expressions, so let’s talk about that first.

The dial is a take on the regulator-style, with the time display on sub dials that do double duty as eyes. The hours are the ‘left eye’ at 10 o’clock, and the minutes, the sub dial at 2 o’clock aka the ‘right eye’. The indicators within each of these sub dials are the pupils.

As well as the time display there is a moon phase that is both familiar and not. For starters, it’s red, which is not a commonly used moon phase colour. It is situated within the joker’s large grinning mouth (complete with teeth) and moves across the open display. Think of it as almost like a red tongue, if you like.

The Joker/ playing card theme extends to the bezel’s decorations, which are engraved references to a poker hand.

The crown at three o’clock is for winding and time-setting, whilst the crown at nine is not so much a crown as a matching receptacle in which resides a standard recessed corrector for adjusting the moon phase.

One thing I learned about this watch, especially when looking at it under a loupe, is that it has aspects best appreciated ‘in the metal’. The waves of guilloché on the silver-plated dial and the contrasting hobnail pattern on the ruthenium-plated forehead and nose area are done to a high standard. 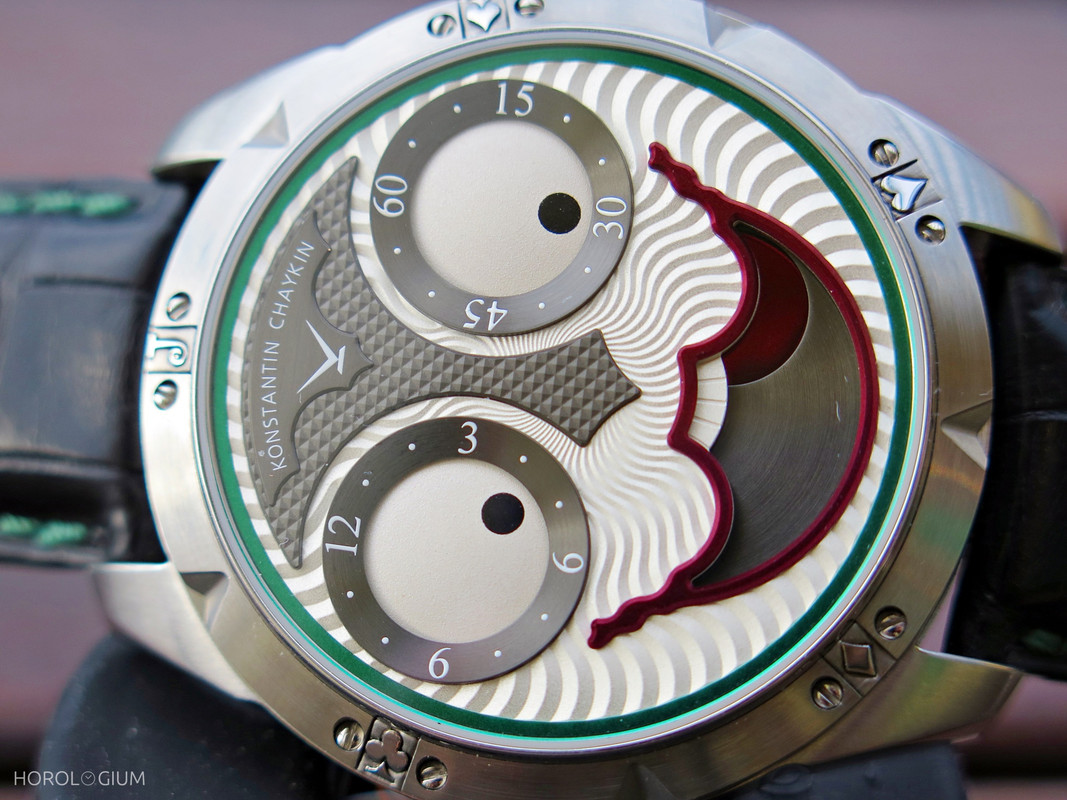 In fact the overall quality of this watch, from the dial right through to the case, lugs (which have a combination of brushed and polished finishing) and the case back decoration, is excellent. 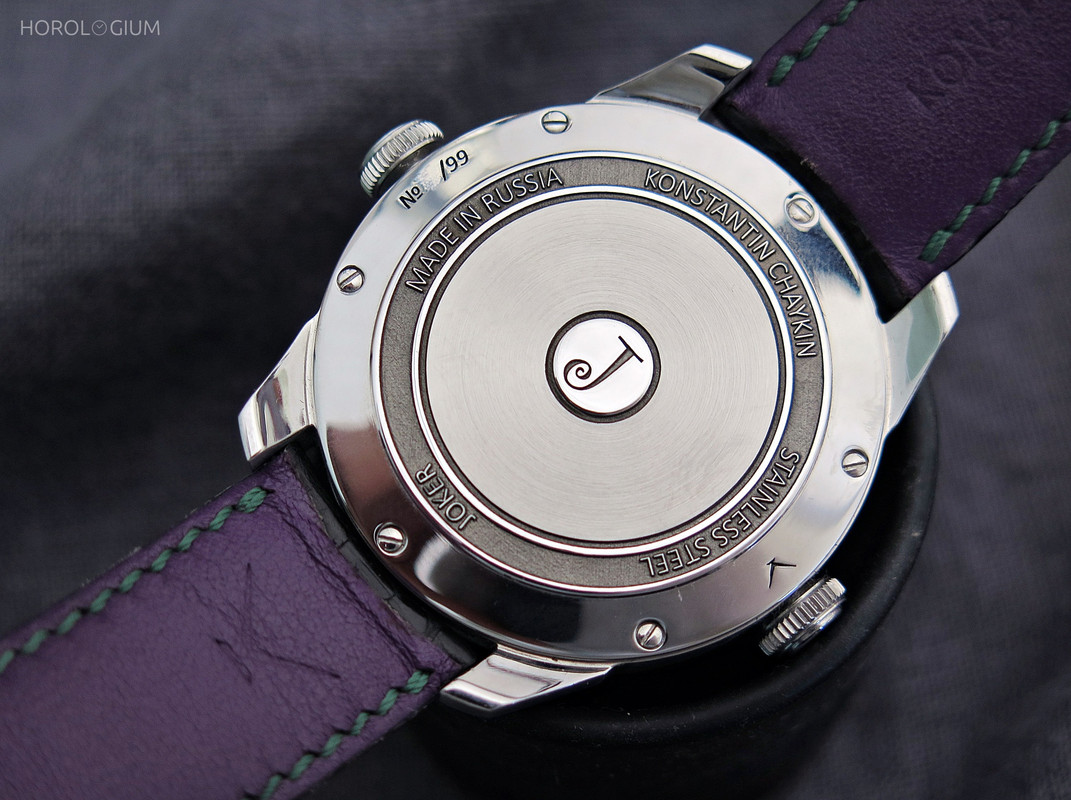 Inside is a base ETA 2824-2 movement that has had modules added to it for the double disc time indication and moon phase. It has a power reserve of 38 hours.

The Joker’s 42mm stainless steel case has a thickness of 12.9mm and thus, a solid presence on the wrist. However, the lugs are quite short, which helps those with smaller wrists. 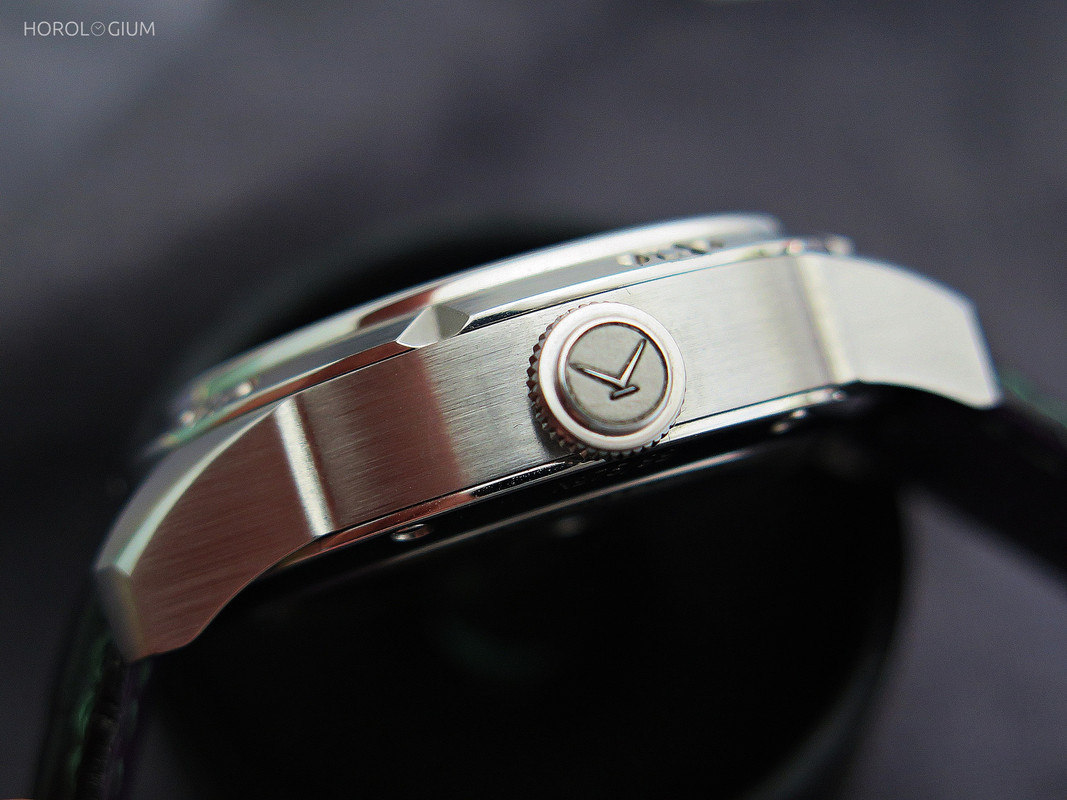 The colour is not just restricted to the dial but is followed through to the strap, which is purple-dyed alligator with calfskin lining and green stitching. 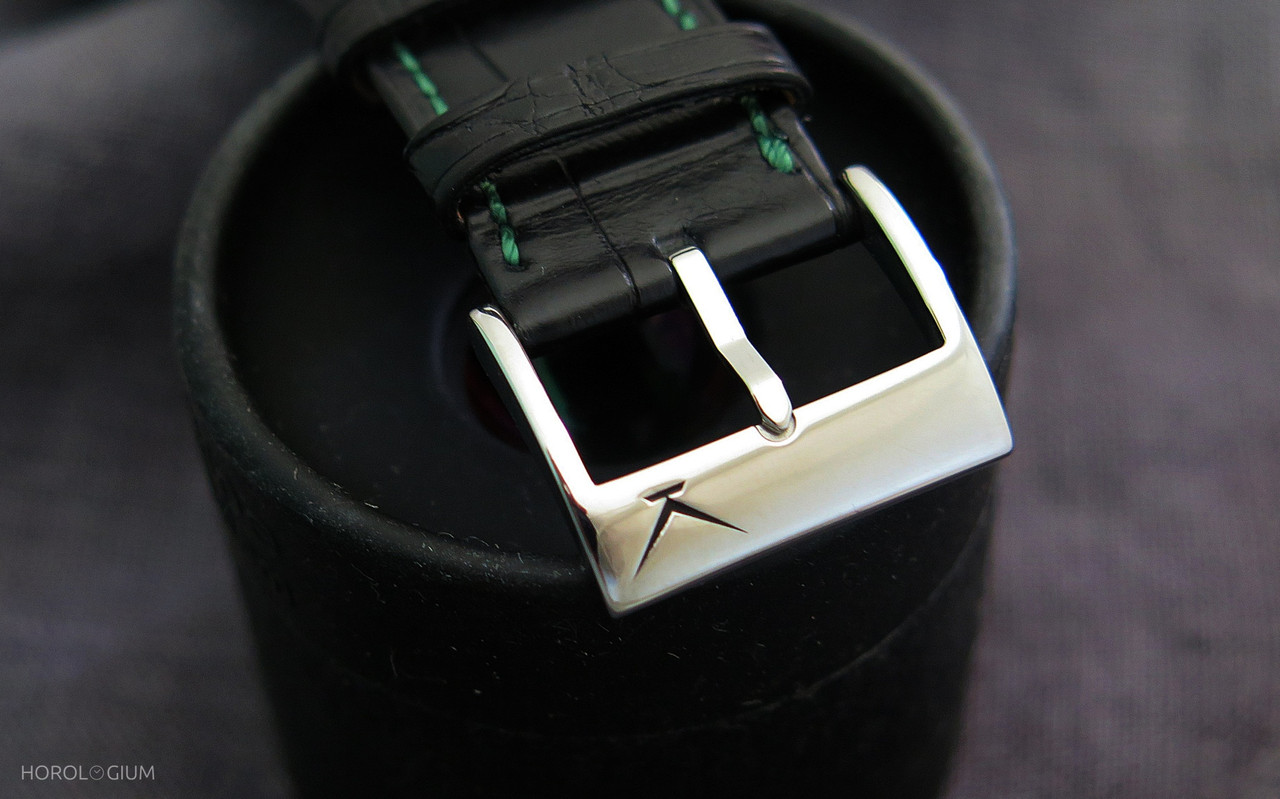 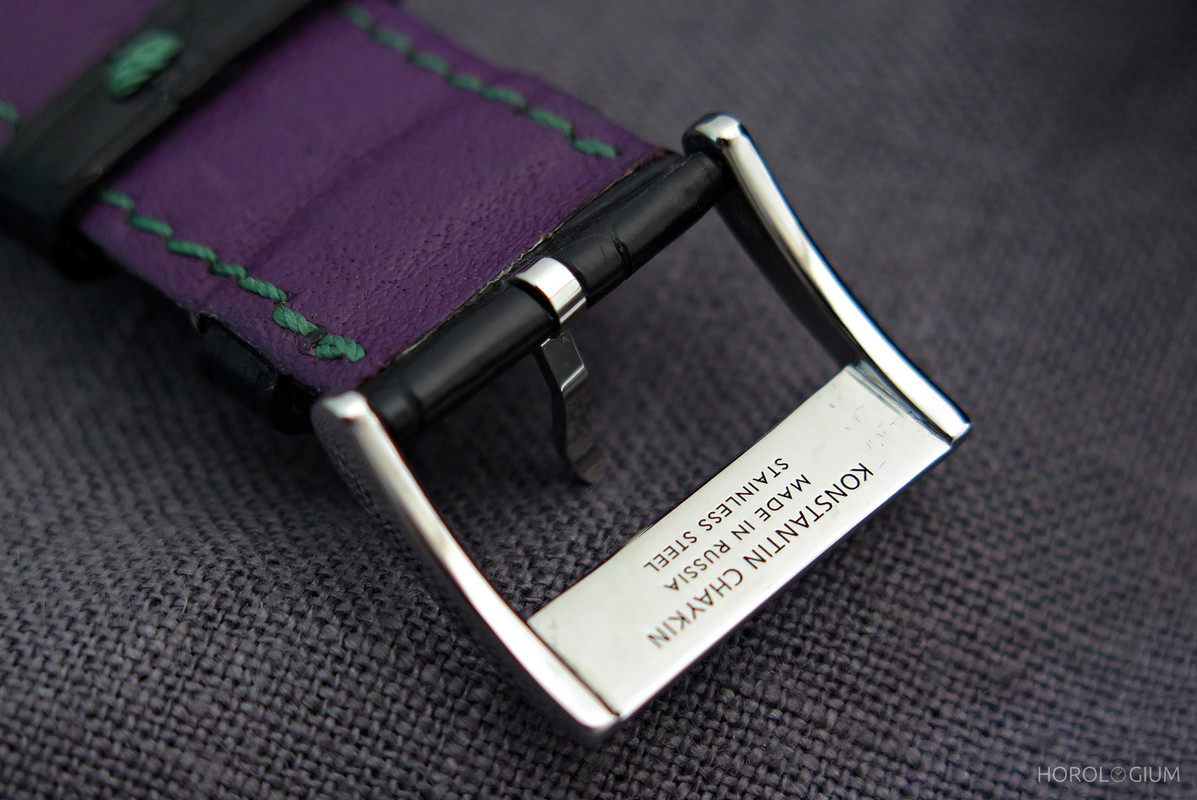 I mentioned at the outset that I had not been one of the Joker’s immediate fans when it was released. This is, in large part, why I felt that I should see this piece not just for a single time for an hour or so, but a second time, for at least the same amount of time if not more.

At the end of my time spent with the watch, I admit that my views changed. One of the major reasons for this is because I can now appreciate the intrinsic quality of the watch in terms of finishing and decoration. A big reason, however, is because it ‘came to life’ for me when handling it, in a way that made it more than ‘a Joker watch’. In the metal, it is actually quite an engaging timepiece to wear and play with. I really had not expected that I would find it as such, so for not the first (nor last) time, I have changed my mind about a watch after actually seeing it.

I also got the opportunity to observe how others joyfully responded to it, both those who knew of it and those who did not. 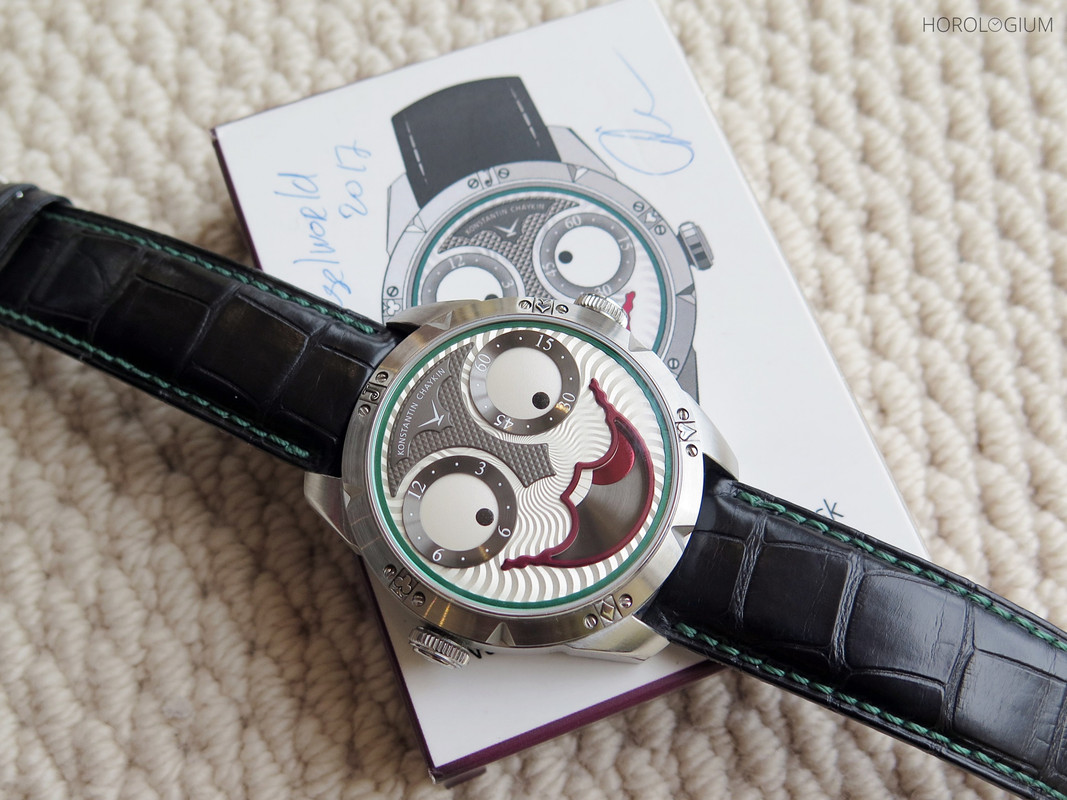 Subsequent to its Baselworld success, Konstantin Chaykin has released two variants of the Joker. A piece unique was created for the Only Watch auction and most recently, one called ‘Clown’. This is an homage to Stephen King and the cinematic release of ‘It’, featuring more coloured pupils, an amended face, including the dial colour, which is more cream, and ‘C L O W N’ on the bezel. It is limited to 27 pieces and probably not for those who don’t like clowns.

As mentioned at the beginning, the Joker was sold out during the Baselworld 2017 week, but the RRP was CHF 7,500. However, if you really love the face, he has now released some cufflinks with the same design. Their RRP is EUR 299 and you should contact them directly via this link/ if you are interested in these or the Clown.