It was only a matter of time before Tudor’s phenomenally successful Black Bay series, which has gone through some colour variants (I own <a href = "http://www.horologium.com.au/2014/04/07/baselworld-2014-tudor-heritage-black-bay-blue/"the blue) and most recently, found itself bronzed, decided that a small complication of some type should be added to the repertoire. What was not certain was the form that this would take.

Well that question has been answered. It’s not a GMT, as some had pondered, but a chronograph.

With a clear modern Tudor Heritage lineage to this new watch courtesy of the diver-lumed markers and hands, along with a rectangular date window and screw-down pushers that are familiar from the Tudor Heritage models and their historical influences of early Monte Carlos, the other sides to the family history appear to be brand stablemate Rolex steel bezel wise (the bezel is fixed), and sub dials that already seem to be the subject of much online chatter, especially in terms of legibility underneath the Snowflake hands.

Inside this new stainless steel 41mm case which is that of the Heritage Monte Carlo chronograph, is the Calibre MT5813. They decided not to go in-house or with their older sibling for this, as its base movement is the Breitling B01 with an integrated column wheel chronograph and silicon balance spring. 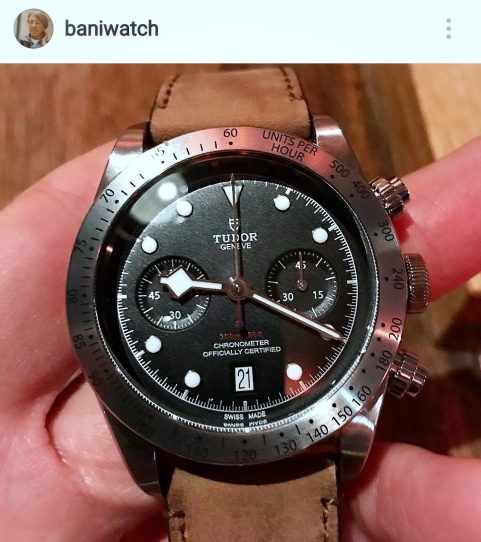 It will be available with a tan leather strap or steel bracelet. Both versions also come with a fabric NATO-style strap. The RRP? 4,500 CHF on the strap.

As we are unable to be at Baselworld 2017, my thanks to Bani McSpedden of watch-next for his permission to use these photos. You can follow him on his Baselworld adventures at the moniker in the photos.