It may be now owned by Gemfields, but the Fabergé name still has a strong brand recognition based on its founder and history. Eggs, objet d’art and jewellery may be what they have been most famed for, but Fabergé have been quietly (by watch standards) but firmly indicating their seriousness about investing in watches over the past few years with the help of partners in the form of  the legendary movement makers APRP (Audemars Piguet Renaud et Papi) and Agenhor/ Jean-Marc Wiederrecht. As they told us during our visit to their London boutique, it is important to them to partner with the best people they can to create the sorts of watches that they want.

At Baselworld 2015 both of these companies came up with movements for women’s and men’s watches for Fabergé; in the case of Agenhor it came in the form of the Lady Compliquée Peacock, with its fanned blades that spread feathers gradually over the course of an hour, indicating the minutes on a scale and the hours indicated by a rotating ring, with the four moving blades flying back to their original position with the passing of an hour.

Based on a 1908 egg which contained a bird automaton that could spread its wings, in this watch the first feather moves forward by 15 degrees per hour, the second by 30 degrees per hour, the third by 45 degrees, and the last by 60 degrees. This is achieved by an Agenhor invention that they have called AgenFAN, made of two series of toothed wheels of increasing diameters on one and decreasing diameters on the other which are superimposed on the same axis. They are placed side by side and mesh along their length. The first toothed wheel is driven by the spindle of the hours cam (the hours cam is beneath the visible hours ring) and drives the second, which powers each of the blades – feathers in this first instance, and ice in the Winter watch that is the focus of today’s post. 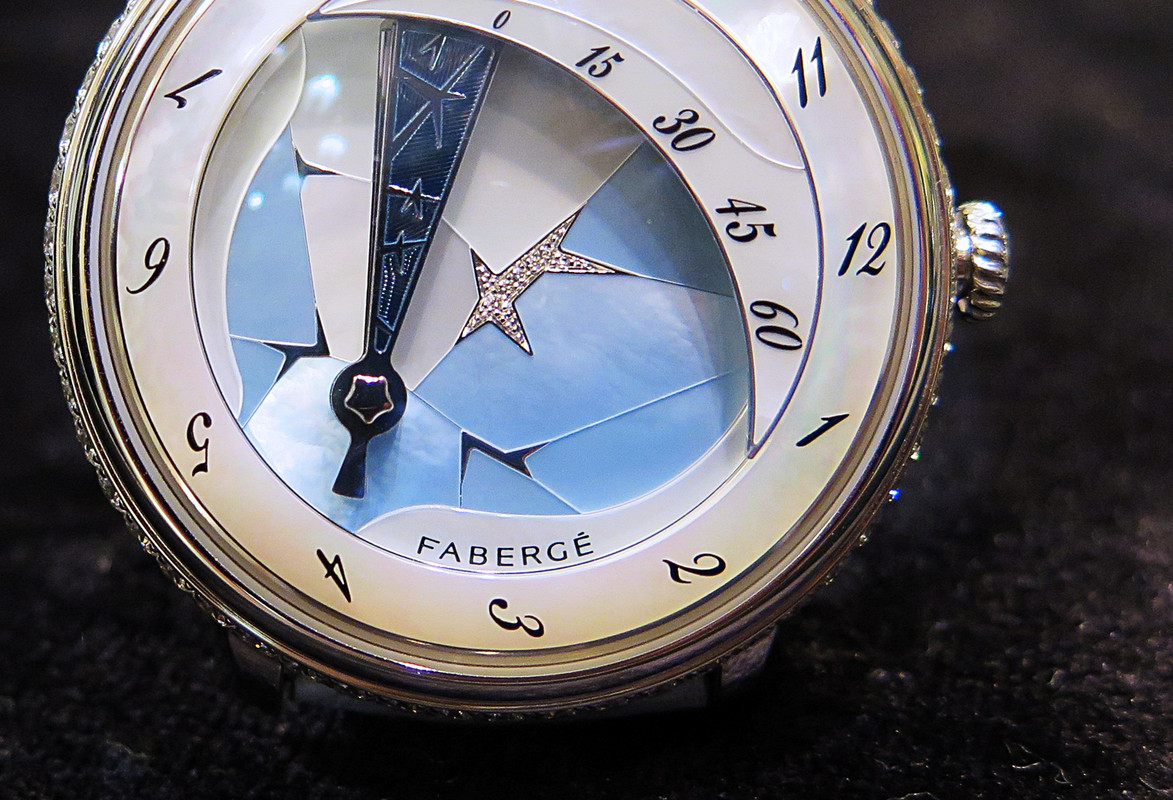 This Agenhor movement that first appeared in Peacock form has now also been used in a couple variants but notably in the Lady Compliquée Winter, which based on the Winter Egg of 1913. The blades that were previously the peacock’s feathers are now atop a curved (to represent the curvature of an egg) mother-of-pearl marquetry dial, with the blades now decorated with iclces and representing the gradual spreading of ice over a freezing lake. The rotating hour ring and minute track are also mother-of-pearl, and you tell the time by reading where the edge of the leading fanned blade is pointing.

The use of curves, the layers, use of blue and white to represent water and ice, and the the sectioning of the mother-of-pearl combine to give a rather soft spirit to Fabergé’s Lady Compliquée Winter. It seems less about the harshness of a Russian winter and more about looking out to the snow from the comfort of a spot near a hearth.

The Lady Compliquée Winter has diamonds set into the dial as well as a diamond set bezel that, because of the 38mm platinum case’s curves, are more discreet, almost seemingly laid into the sides. The sky blue lacquer of the fan is hand-applied. 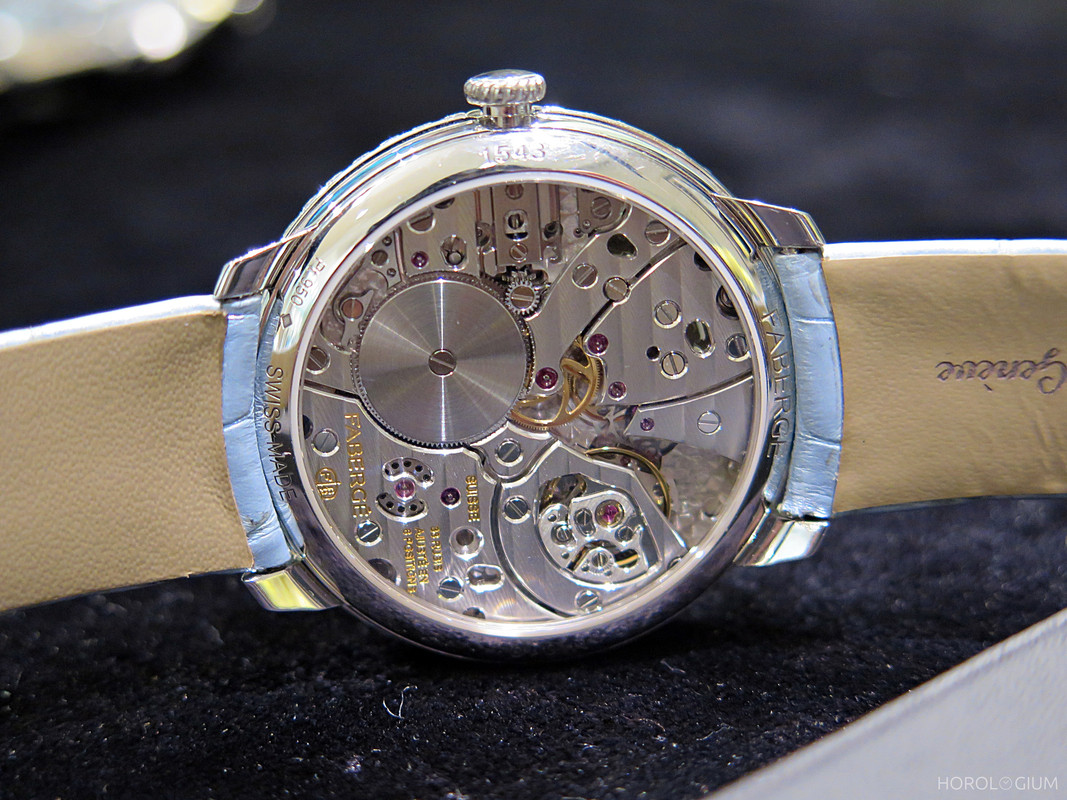 Inside, powering the fanned retrograde time display, is the manually wound Calibre 6901, which has a diametre of 32.7mm and a power reserve of fifty hours, beating at 21,600VPH. It is visible through the case back and has horizontal Côtes de Genève decoration on the bridges, and circular graining on the main plate.

It is a really very charming piece to look at, but equally importantly, it is a really clever and interesting watch and a rather wonderful realisation of the Winter Egg in a horological form. I’m a fan of retrograde time displays, and Fabergé/ Agenhor’s fanned blades have been used to great effect in this Winter watch and the Peacock.

I know that there are some of you who don’t pay as much attention to women’s complications as you do men’s, but as I’ve noted before with other brands, it really can be worth your while to see that innovation and imagination are becoming more important in women’s timepieces, and rightly so.

For those with ties to Australia there’s a more personal note, with the mother-of-pearl being Pteria Margaritifera from Australia.

Although this watch comes on a light blue strap, I think it could look equally good on dark blue or white straps as well.

My many thanks to the Fabergé boutique in London for their time showing #thewatchnerd and I some of their timepieces.