2016 is the 40th birthday of the much-loved Heuer Monza chronograph, and to celebrate this milestone, TAG Heuer has launched a new sleek modern homage to the highly collectible and desirable original model.

In 1976 Jack Heuer, the great grandson of the brand’s founder, released a chronograph to celebrate Niki Lauda’s first world championship title with Ferrari. At the time they were the official timekeeper for Scuderia. The original on which this new watch is based was also the first time that ‘Monza’ appeared on the dial.

For the 40th anniversary edition their inspiration has been focused of course on colour and function. It has the same key functions as the 1976 original – pulsometer (a ’15 beat’ pulsometric scale), tachymeter scale (not included on previous reissues) and with the original font. The colour scheme is the familiar black dial and red and sand coloured notes for the functions.

The black and white lacquered hour and minute hands look as per the original, and the hands on the sub dials are also reflective of those in the 1970s model. The colour of the hour markers is similar, although they are longer than those in the original. The indices are a faux-vintage Super-LumiNova. Insofar as the watch world has its controversies, the use of this type of lume for ‘homage’ and vintage reissues is something that many feel strongly about. I fall into the camp of those who take it on a case-by-case basis; sometimes it seems to work and other times, it doesn’t. In this instance the ‘faux vintage’ is easily seen as just ‘cream’, and to my eyes at least, it looks less ‘faux vintage’ and more just a natural colour choice. I think it works really well. 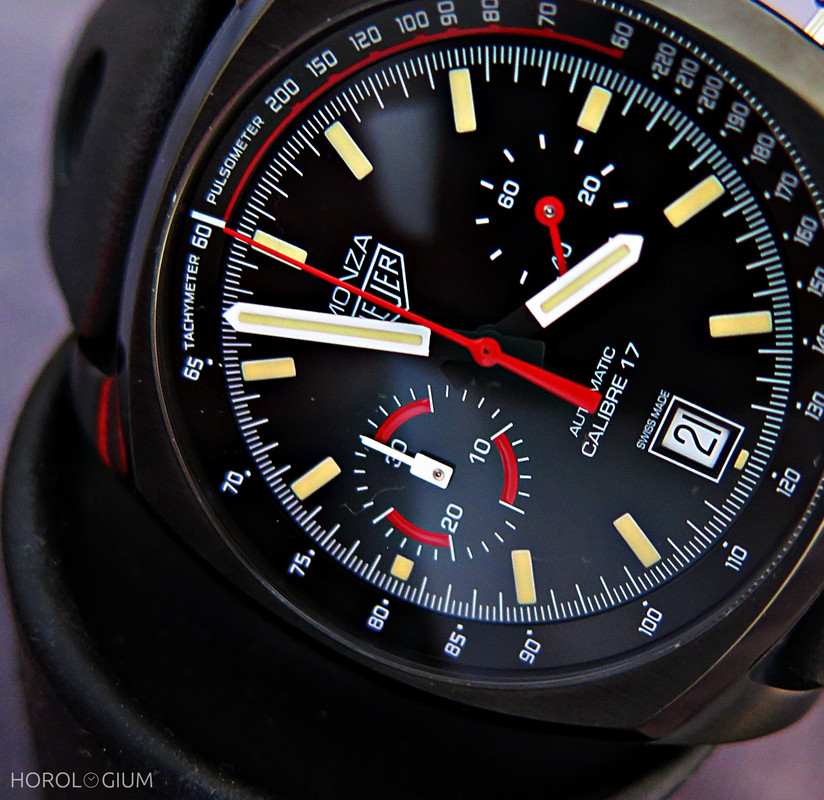 The 2016 re-issue’s close nod to the original continues with the use of the ‘Heuer’ logo, as is the case with other TAG Heuer vintage reissues, and the same logo (with red lacquer finishing) also appears engraved on the screw-down brushed solid case back. Hidden beneath the case back is the automatic Calibre 17, which powers the dual register chronograph counters at 3 o’clock and 9 o’clock and is a base ETA 2984-2 with the addition of a TAG Heuer rotor.

In terms of major changes the case is all black just like the historic model, only now it’s not the PVD of four decades ago but titanium carbide coating, with both polished and brushed finishing. Shape-wise, however, it is more cushion-shaped than the 1976 model. It has been pointed out that this shape is more akin to other Monzas that have been released. Note also the presence of contrasting polished steel chronograph pushers and crown, the latter with the Heuer logo decorating it.

The diametre has also been increased from the original 39mm to 42mm. Which is preferable will be down to you – 42mm is a more 2016 type of size for a sports chronograph, but 39mm is not too small, even now. 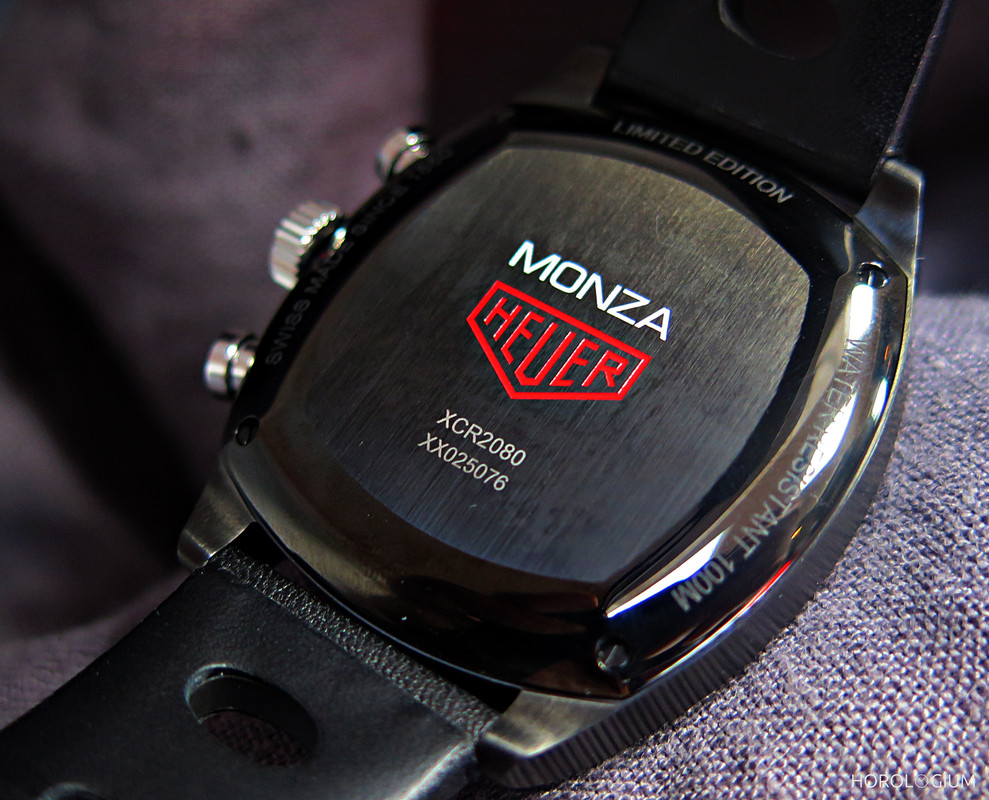 This modern homage comes on a ‘racing’ perforated strap in black calfskin that is also a 1970s reference, itself a nod to the design of the three-spoke steering wheel on the racing cars from four decades ago when the original was released. The strap comes on a titanium deployant buckle.

This new limited edition 40th anniversary Heuer Monza has an RRP of 4,900 CHF. It is a good looking watch, and in seeing it and then having a bit of a think about it as I wrote this, it occurred to me that as a modern interpretation of a classic watch, and with a solid movement inside, this might be TAG Heuer’s equivalent to the roaring success of the Tudor Black Bay? A sporty good looking and very modern watch with its own clear identity, but also enough ‘history’ to it to make it something more than ‘just’ another new model.