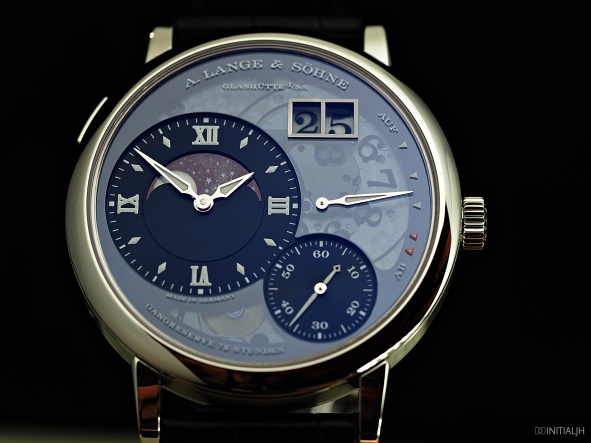 The recent Australian tour of many of this year’s releases by A. Lange & Söhne, with Joanna Lange co-hosting the local events, provided the opportunity for me to reacquaint myself with my favourite Lange release of 2016 to date –  the limited edition Grand Lange 1 Moon Phase Lumen, which we saw at the SIHH 2016 in January.

This is the third of their Lumen models, following the Zeitwerk and Grand Lange 1 ‘Lumens’, characterised by the smoky-coloured semi-transparent sapphire dial as much as for the lume.

A. Lange & Söhne originally introduced the Grand Lange 1 ‘Lumen’ in 2013, a radically ‘un- Lange’ watch design with a semi-transparent sapphire-crystal dial through which people could see the disc configuration of the Lange outsize date. This was followed by the Grand Lange 1 Moon Phase with an in-dial moon-phase. This new piece is perhaps the offspring of both of these, applying the former to the latter, and ending up with another fabulous Lumen.

Not unexpectedly, there is a generous use of luminous material on indicators. As per the Grand Lange 1 Lumen, the two discs responsible for the oversized date are lumed, the disc with its black numerals made of transparent glass rotating in front of a luminous background. All this use of lume gives effect to rather beautiful sight in darkened conditions. 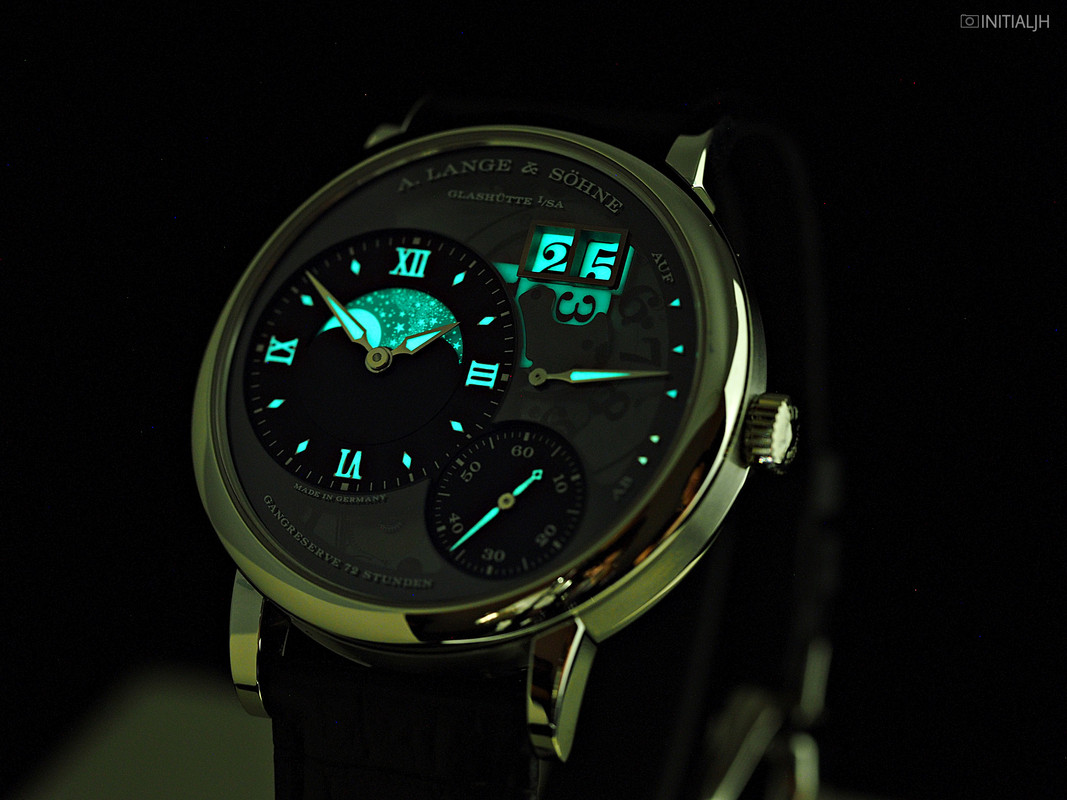 For those who wonder how best to photograph this watch in the lumed manner shown in the photo above, it involves a dark room, distant lighting, and being told by the photographer to stop breathing.

In the Grand Lange 1 Moon Phase form the moon phase indicator is blue with a gold moon and stars, on a gold disc base. For this new watch, the moon disc is glass. The surface is treated with a patented coating process, after which laser cutting takes care of the 1,164 stars and the moon. Yes, one thousand one hundred and sixty four. No, I have not counted them. Thanks to the luminous compound behind the lunar disc, all the moon and stars will be illuminated in the dark. 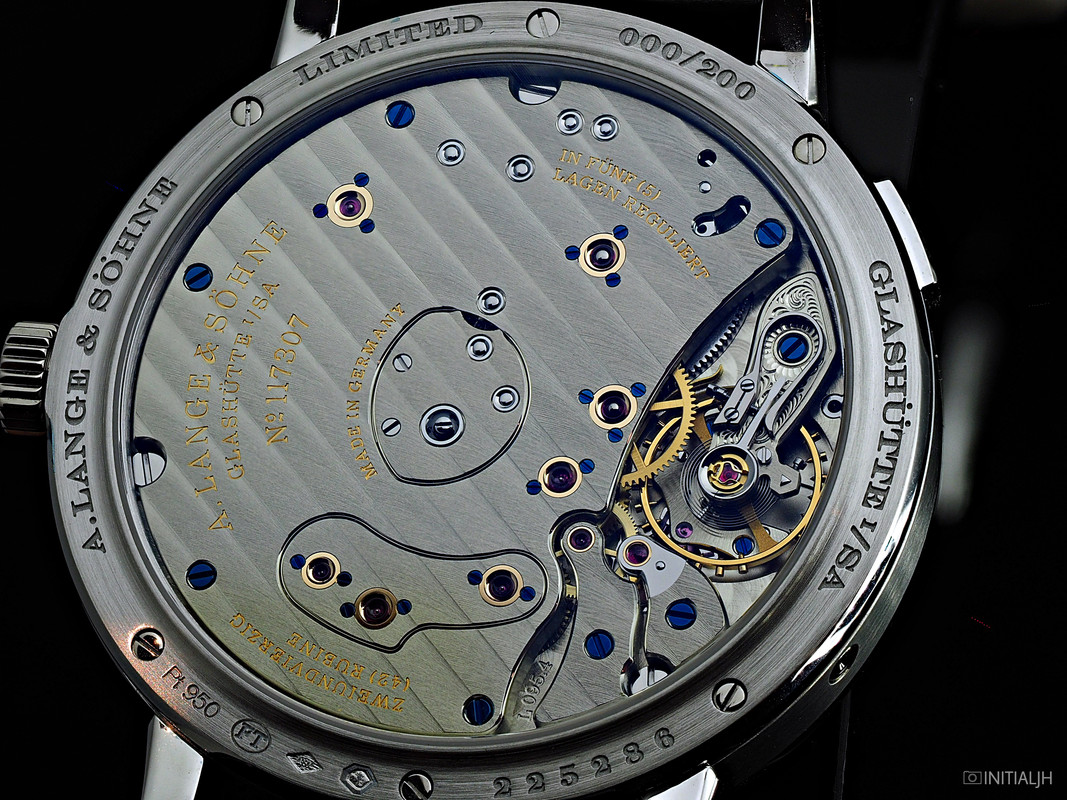 As is the case for the Grand Lange 1 Moon Phase, the moon phase on this new watch only needs to be corrected by one day every 122.6 years, with a moon cycle of 29 days, 12 hours, 44 minutes, and 3 seconds. This is all thanks to the manually wound Calibre L095.4, with its three-quarter plate of untreated German silver decorated with Glashütte ribbing and seven screwed gold chatons. Having visited the A.Lange & Söhne manfactory earlier this year and been in the room where it is done, I can confirm that it is possible to identify who engraved the balance cock on your Lange. Visiting this workshop and finding this out was, in fact, one of the highlights of my visit.

As stated on the bottom of the dial, the large mainspring barrel delivers a power reserve of 72 hours. 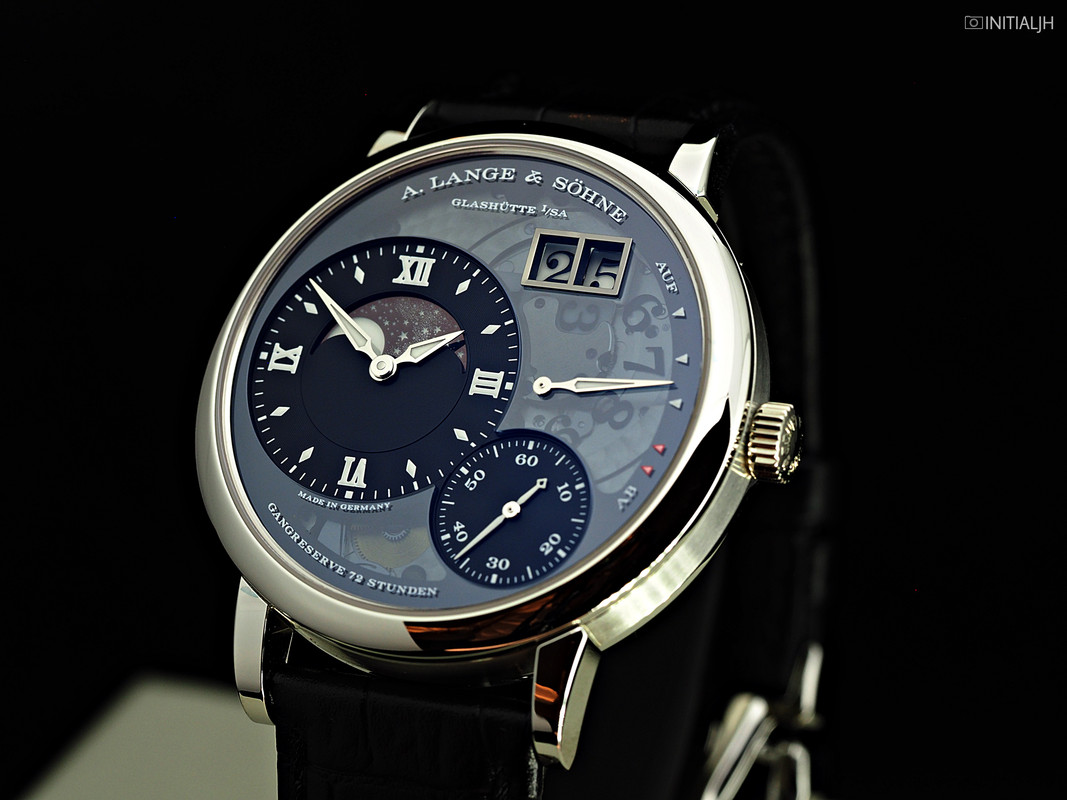 The A. Lange & Söhne Grand Lange 1 Moon Phase Lumen only comes a platinum case with the smoky grey crystal/ black dial. It is 41mm in diametre with a thickness of 9.5mm, and the date correction is as per usual, via a pusher at 10 o’clock. It comes on a black alligator strap with a platinum deployant buckle.