When watch enthusiasts are asked about iconic chronographs a few names are often mentioned in the same breath : Rolex Daytona, Omega Speedmaster, Breitling Navitimer, and the Zenith El Primero.

What makes these chronographs iconic? Well it comes down to their designs; these are watches with quite individual design ‘DNAs’ have proven themselves to have lasted the test of time. In fact, the designs are so instantly recognisable that the manufacturers do not dare revolutionise the design with each upgrade, instead sticking to merely slowly evolving from the original with subtle changes.

However, it is not just about the design, of course. It is also about the movement when it comes to chronographs. 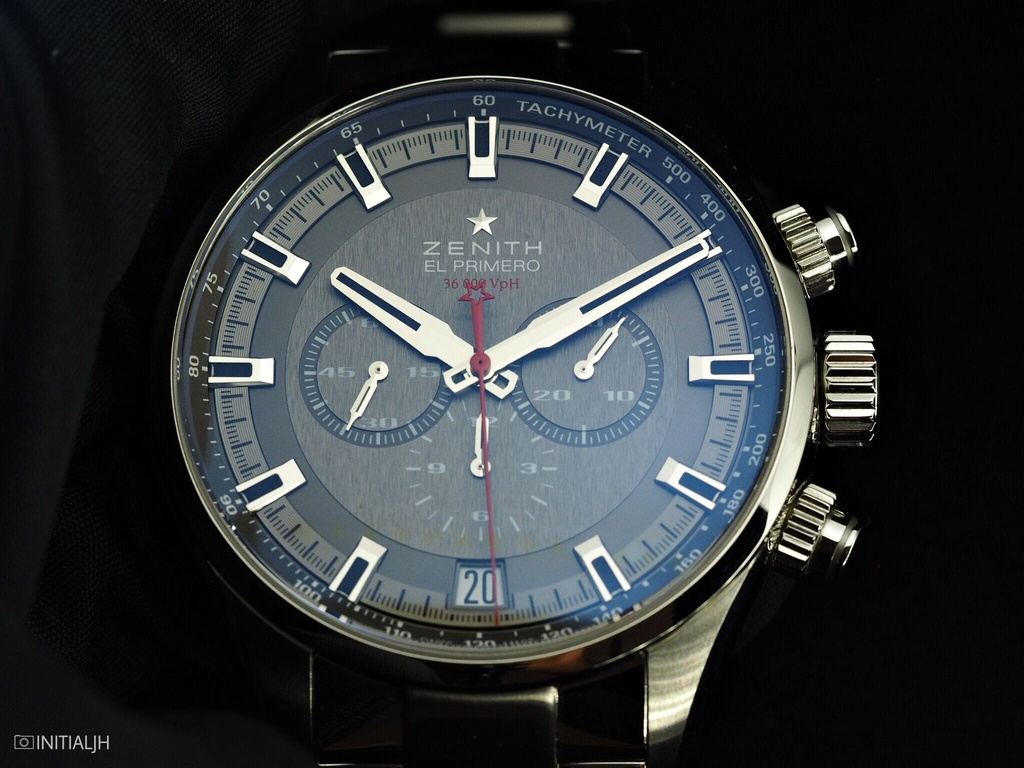 In fact the modern day El Primero is still used by Zenith and several other major manufacturers and, interestingly, was the base movement that Rolex chose for their Daytona in 1988 with the launch of the new reference 165xx.

In 1969 the El Primero 400 calibre was released, to widespread acclaim that the movement was the best automatic chronograph available on the market. Rolex made modifications, reducing the frequency from 36,000VPH to 28,800VPH and arguing that this would increase reliability while reducing the need for maintenance, and improve the power reserve. The date mechanism was removed, new balance and escapement introduced, and Rolex marketed this as the Calibre 4030. 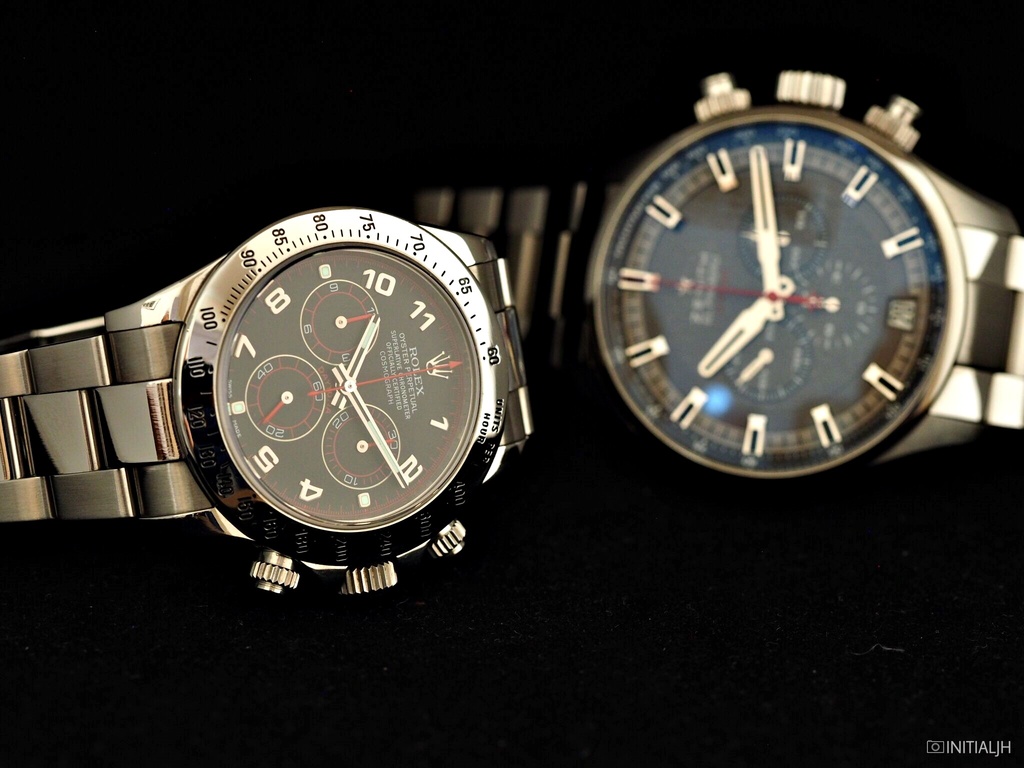 For Rolex, this was a marketing and sales success. The limited supply of base movements and strong demand from the market meant these automatic Daytona rapidly achieved cult status, which also meant that it affected the perception of pre-automatic Daytona models.

For a company for whom change occurs so rarely and slowly, Rolex introduced their own in-house developed Calibre 4130 in 2000. This automatic winding chronograph was designed to be easier to service. Beating at 28,800VPH, the same as the Calibre 4030 it replaced, power reserve was increased to 72 hours and a hacking-second feature added. The balance-bridge was chosen over the balance-cock as found in the older Calibre 4030. What is interesting with the chronograph mechanism is that Rolex opted for a vertical friction clutch rather than the horizontal clutch system that is found in the El Primero, for the chronograph mechanism. The result? A more accurate seconds hand movement when starting the chronograph.

Putting tech talk aside, what is it like to have both watches as daily wearers? I was recently fortunate enough to have these two watches in my possession to compare on a day-to-day basis.

Firstly a disclaimer : my wrist is on the smaller side (6.75in), and the current fad of going big in terms of wristwatch is not optimal for me.

At 40mm the Daytona is perfect on my wrist; not too big, and not too small. An additional benefit is that the relative slimness of the Daytona means comparative ease when wearing it under my shirt cuff.

As for the Zenith, if I had the choice again I would pick the more traditionally-sized 38mm or the 40mm Zenith El Primero. At 45mm the El Primero Sport is too big for me when worn on the bracelet, but this can be overcome by wearing it on a NATO strap. The El Primero is an elegant watch, big, muscular, sporty. When worn on the NATO the size is less noticeable, and it is less heavy. However, the thickness of watch is evident and I found myself having to pick shirts to fit the watch, not the other way round. From this aspect the Zenith is more likely to be a weekend watch than something that I can wear 7 days a week. 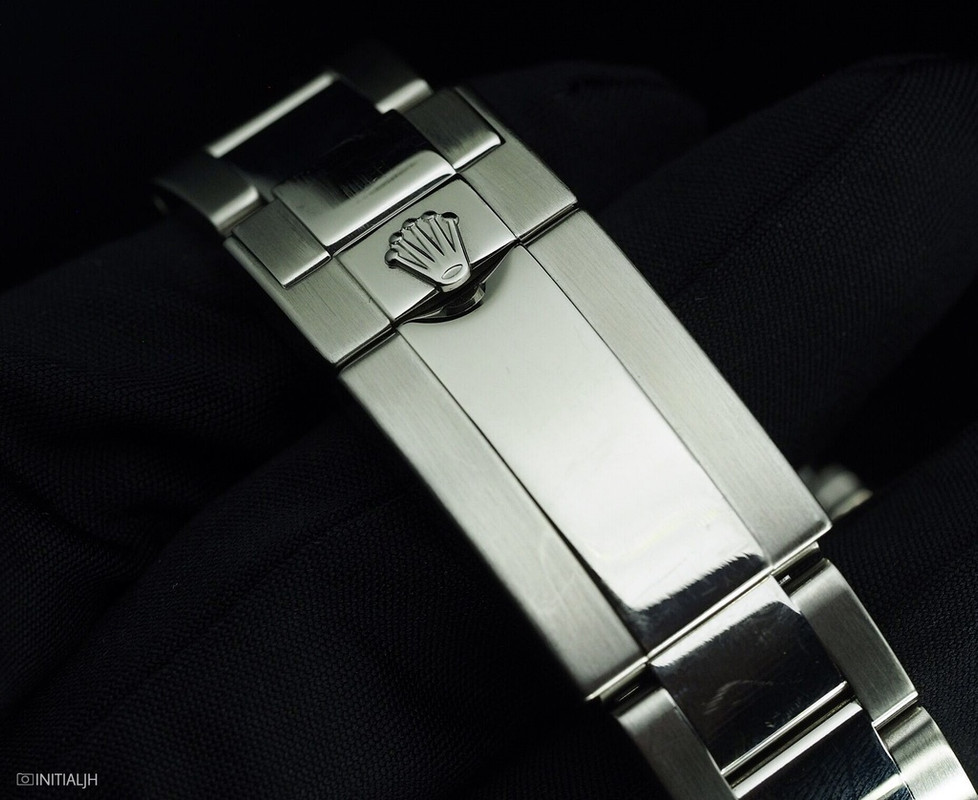 So since I’m talking about the bracelet – it’s hands down to the Rolex over the Zenith. The finishing on the edges of the bracelet on the Rolex, whilst still crisp, feel smoother and less sharp to the touch than that of the Zenith. 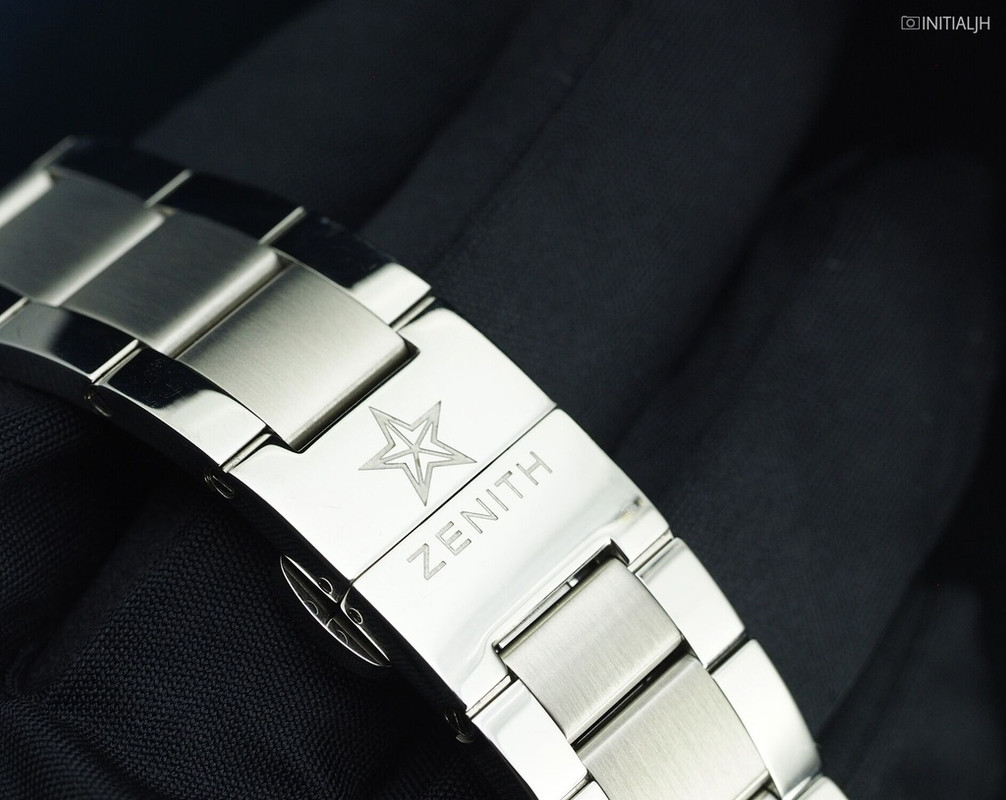 Micro-adjustments? There is more flexibility on the updated Daytona bracelet, with a clever hidden clasp to be opened should the wrist swell due to temperature variations. The new Daytona bracelet is certainly more solid and an improvement over the older bracelet on the 165xx series Daytona.

The benchmark of legibility in chronograph design, in my opinion, goes to the Omega Speedmaster; white on black means legibility is optimal at various angles. The thickness of the hands has been optimised with each iteration of Speedmasters. Reading the totalizer sub-dials is also relatively easy, regardless of ambient brightness.

The two watches I have here have very similar colour schemes. The Zenith a mixture of grey scales with the accent of the red chronograph seconds hand. Along with the larger and more muscular case, the hands on the Zenith are also bulked up. Time telling is relatively easy with the larger hour and minute hands. However in certain positions I found that these hands can obstruct the sub-dials. In addition, whilst I appreciate the darken markers as being uniform to the whole design of the watch, it does mean the Luminova is not very bright at night. 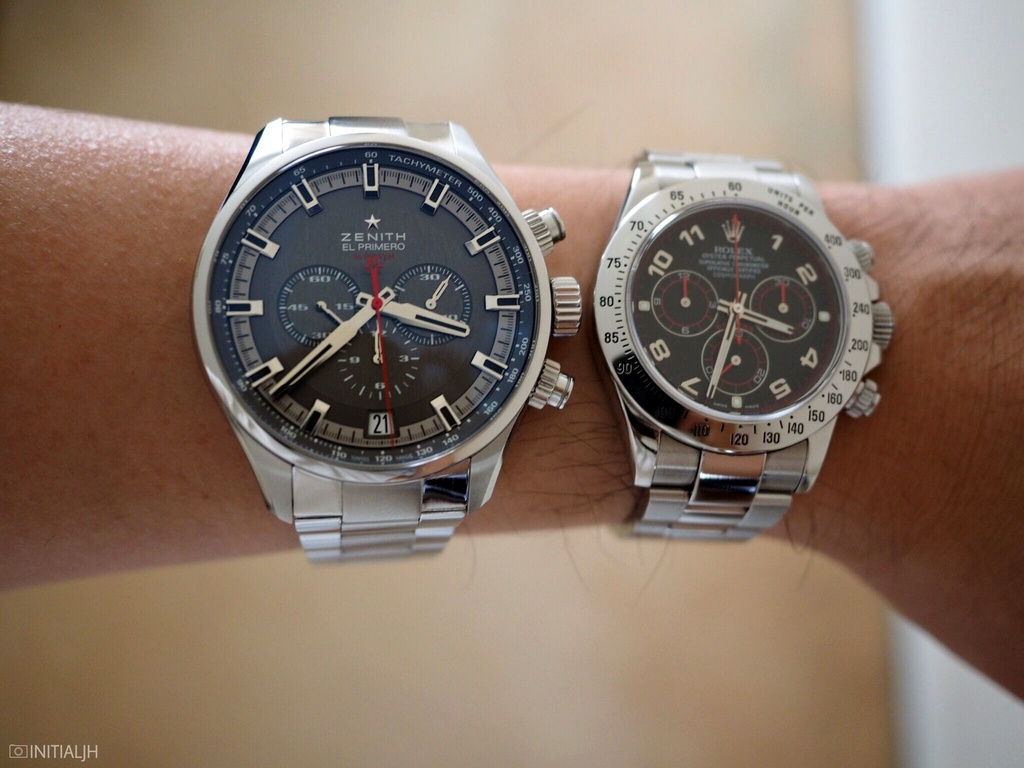 The Daytona I tested is NOT a standard model. It is a stainless steel model, but the owner had the dial from the white gold model swapped over; the basic dial colour scheme is red on black. Whilst this is pretty during the day, the red hands tend to disappear into the black in low lights, which means, like the Zenith, that time telling is fine, but trying to read the chronograph totalisers in less than optimum lighting is challenging. A point to also note is that the lumed markers are brighter on the Rolex, and lasts longer throughout the night.

When using the tachymeter, I prefer the external scale on the Daytona. The internal tachymeter on the El Primero is slightly harder to read at a quick glance.

However, these are small quibbles.

The operation of both of these watches is relatively straightforward. 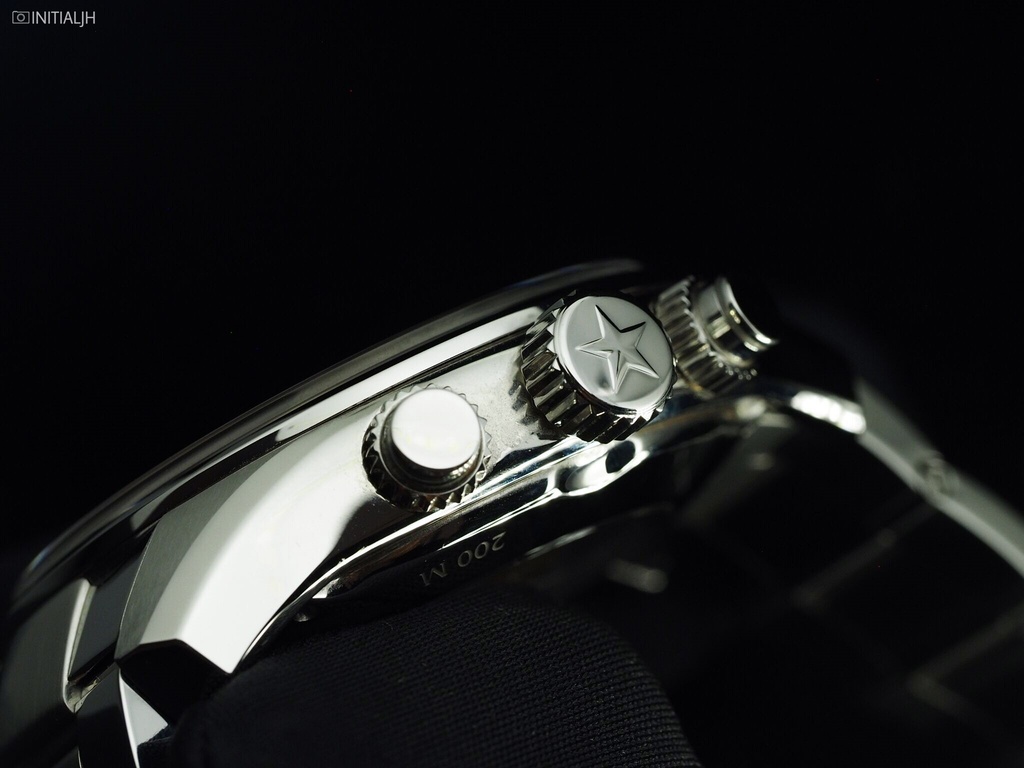 Kudos to Zenith with their half-turn screw-in buttons. With a quick turn, the chronograph buttons can be used quickly. Not so with the Daytona; it takes a few seconds to unscrew before the chronograph can be activated. Why have these screw in buttons, one may ask. There are many conjectures but one plausible reason is to prevent the activation of these buttons while the watch is underwater. Even in the unscrewed position, the Daytona is still water resistant to 100m. So why keep it? I guess the screw in buttons are part of the Daytona design, although earlier Cosmographs do not have this design feature.

What is it like to actuate the chronograph? Both of these are column-wheel movements, but that is where the similarity ends. The El Primero is a fine movement to start and stop. The action is precise, and there a delightful ‘click’ when the chronograph is actuated. The reset is also precise.

However, the horizontal clutch system does mean the start of the chronograph is not as smooth and can jump at the start when compared to the Daytona’s vertical clutch system. Once started, the sweeping motion of the chronograph hand is smoother than the slower beat Daytona. Whether this bothers anyone is up to the individual wearer. Does it affect accuracy? Not really. After all, we are not timing the re-entry into Earth’s atmosphere… 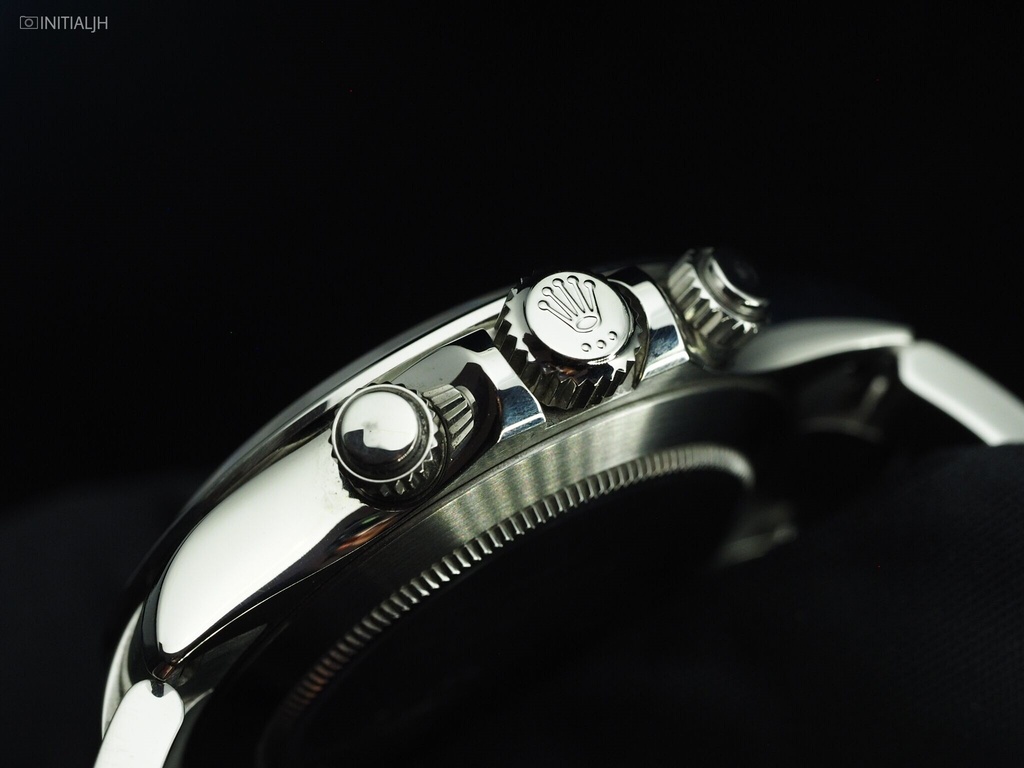 All in all, these are two iconic chronographs that I am happy to wear if given the opportunity to own. However as a daily watch, I would pick the Daytona over the El Primero purely based on the factors of size and comfort on my particular wrist.