A number of months back without much fanfare, Jaeger-LeCoultre released a mini-collection of Master Ultra-Thin limited edition pieces that combine skeletonisation and enamelling. Their first big public outing was at Watches & Wonders 2015. There are a total of four references in the new collection – two grand feu enamel decorated models in white or pink gold and two gem-set models which are by virtue of the gems, slightly thicker. We had the chance to see one of the four, the pink gold.

Skeletonising their forty-year old manual-wind Calibre 849 to a thinness of 1.85mm (making this 119-piece movement the 849A SQ), the new 38mm-sized watches are a staggeringly scant 3.6mm for their thinnest iteration like this pink gold model. The gem-set models are slightly thicker, at 4.7mm. One advantage of using an old movement is that has been tried and tested. 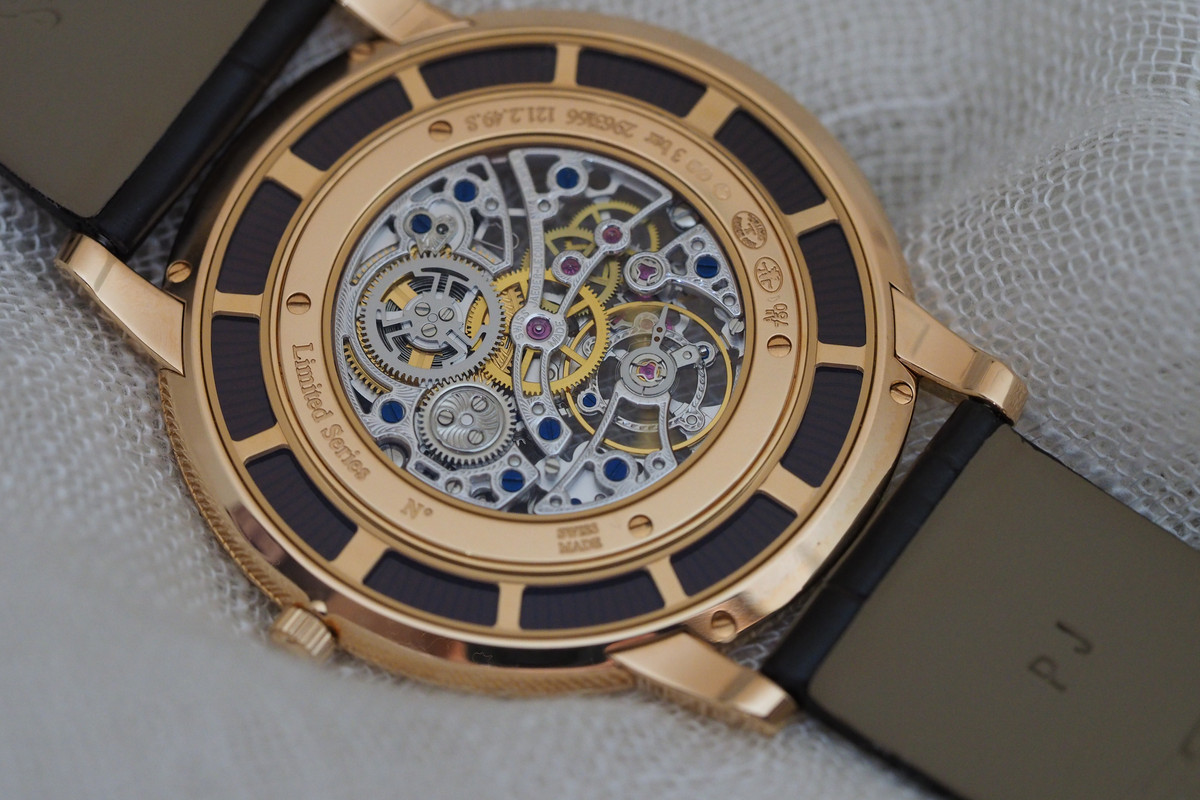 It is impossible to avoid mentioning the Piaget Ultra-Thin 900P which is a hair’s breadth 0.05mm thicker, at 3.65mm. You may recall a photograph I took comparing the Piaget with a coin. Although regrettably I wasn’t carrying around 1 CHF with me (that comparison would make sense), in any event, here is another coin comparison photo. HKD1. This has granted the Squelette a new record. 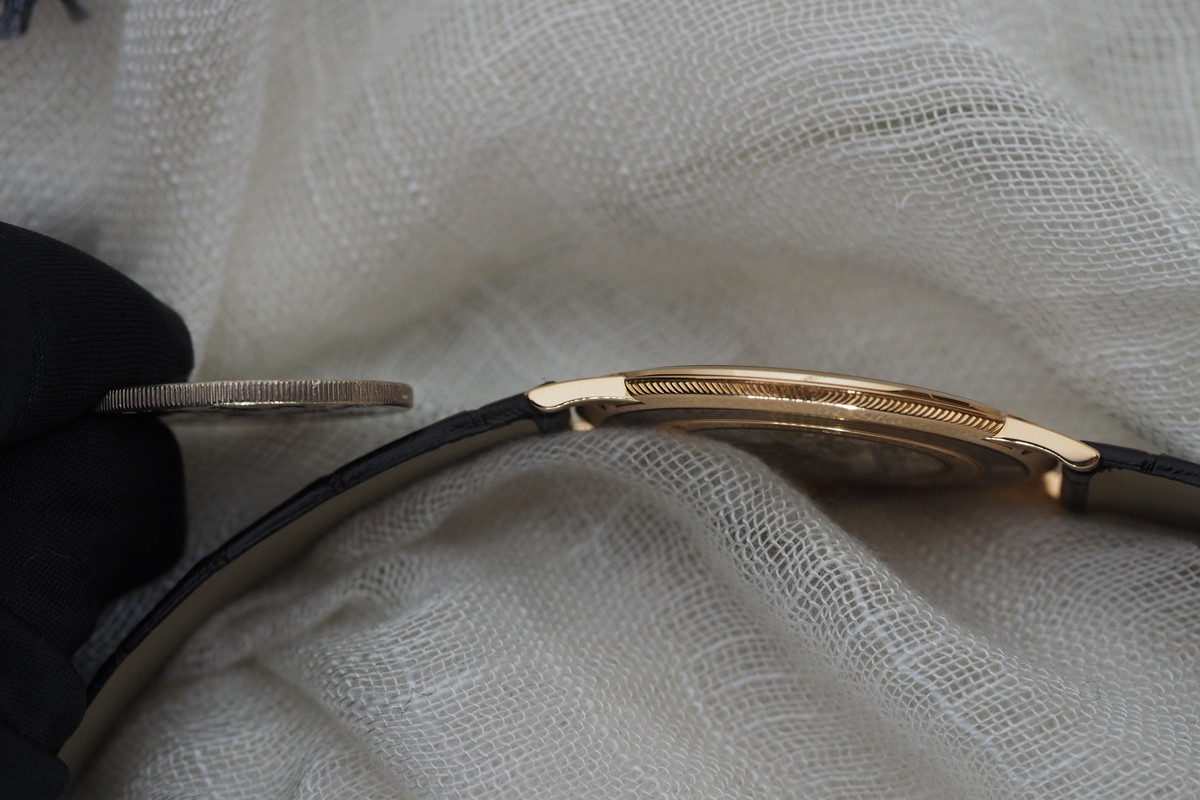 The circular band of the case is separate from the lugs, which are secured by four screws. A further four screws hold the movement. The thinness is also achieved by having the movement on the same plane as the enamelled chapter ring (which comes in blue or burgundy). The gem-set versions have an engraved mother of pearl chapter ring. 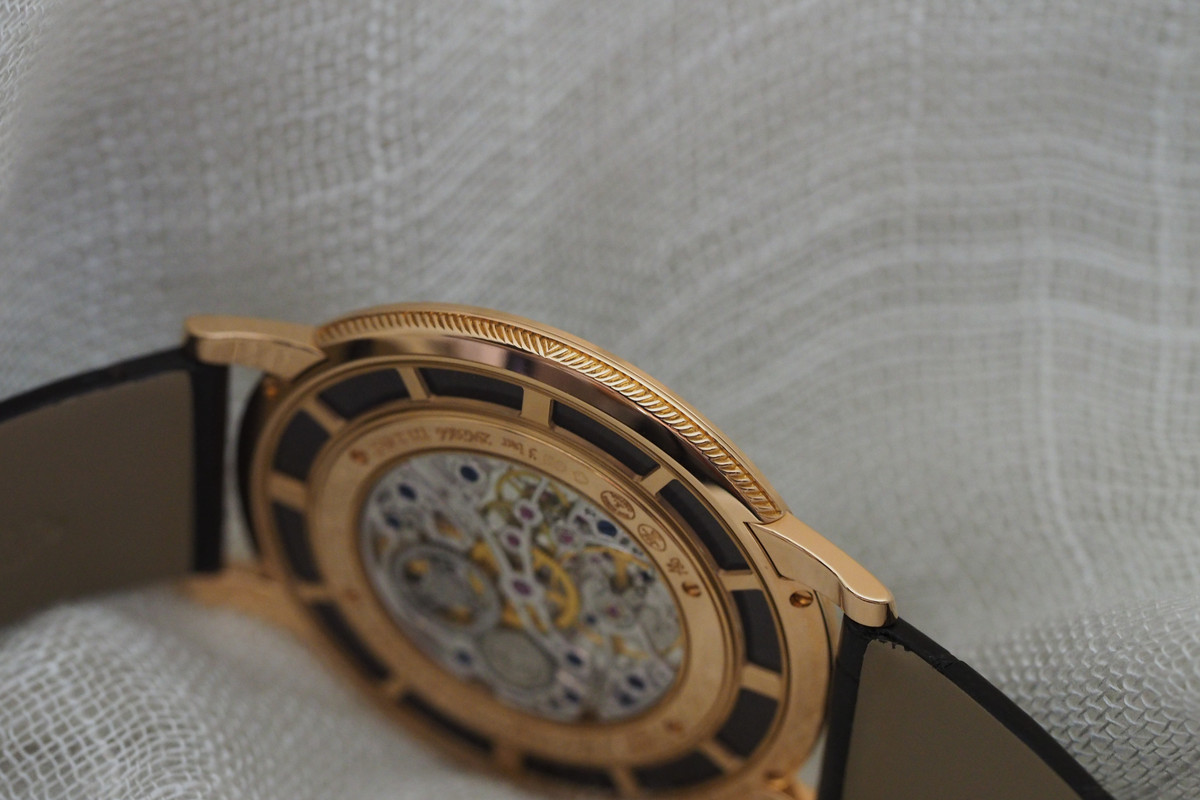 To handle this was quite an experience. I know that I’ve said this before but when presented with ever-thinner watches, it is really something to behold. It’s just incredible how watchmakers are able to ‘flatten’ movements to this degree and yet have a wristwatch that is not as fragile as it looks. That all being said, it does feel every bit as thin as it is, and requires a bit of getting used to. You do notice its presence on the wrist, thank goodness, but even for those used to wearing ultra thin watches this degree of thickness/ thinness is still something quite different. It is not for everyone, and if you are interested it is, as always, best to try one one first.

Each of the four new references will be produced in a limited series of 100 pieces on alligator straps. Prices start at USD58,500 for this pink gold model and go up to USD75,000 for the white gold gem-set piece. For information on all four references, go to this link.