Some of you may remember Jaeger-LeCoultre’s monumental Hybris Artistica set of twelve timepieces releases from 2014. As an exercise in saying “hey look at all the things we can do”, it was pretty successful.

Today is about one of those twelve, with which we had the opportunity to spend some time a little while ago.

The first big change from the wrist version is of course the moving of the crown to 12 o’ clock, which now places the tourbillon at the bottom. As well as the time at 12 o’clock there is a second time zone on a sub dial between 8 and 9 o’clock, and seconds on the subdial between 3 and 4 o’clock. These three dials are grand feu enamel. There are also two slim power reserve indicators.

As you can see the ring above the crown, case’s side and bezel have blue enamelling work, with ‘sectional’ markers acting both as decoration and hour indicators. Very elegant. However, what I particularly like about the main dial is the plate’s ‘grained’ texture (achieved through hand chiselling), whose ‘coarseness’ is not just attractive in and of itself but also as a textural contrast to the enamel. If you look carefully you will notice that the ‘sectional’ markers aren’t he only things marking the hours; the dial is attached to the bezel at twelve points, making it almost float. 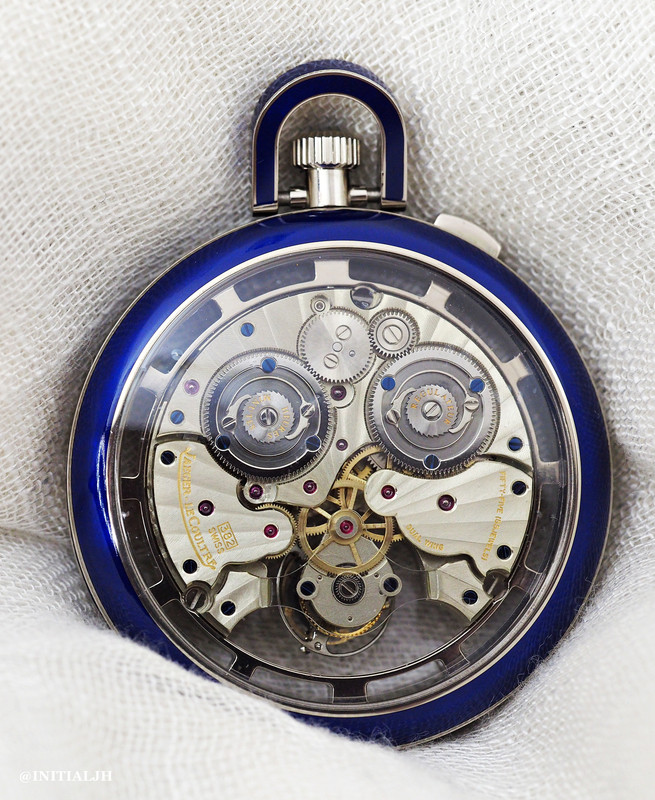 The back shows the beautifully finished movement with the Duomètre dual wings. For those new to the Duomètre timepieces, what is special about them is their movement, which is characterised by two independent energy sources (thus the two independent power reserve indicators on the dial), each devoted to a different function. Two separate gear trains and main spring barrels, one for the time and the other for the relevant complication. The gear trains are connected by a single shared regulating organ. 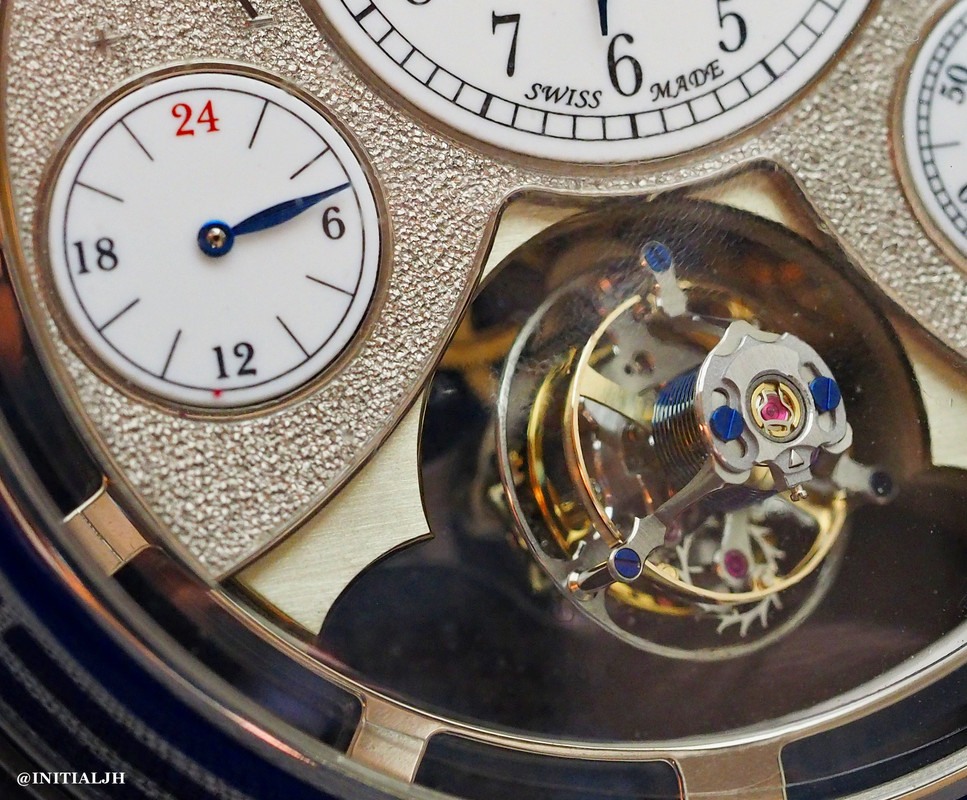 This is not the only Duomètre Spherotourbillon in enamel that is part of the Hybris Artistica. There is also a wristwatch with a blue paillonne enamel dial for which a block of solid silver is chipped and formed for the dial after which it is heat-treated and polished. Further steps in the creation include an extreme heat treatment and finally its polishing which ultimately makes the dial look as a starry night sky.  That wristwatch also has a blue enamel bezel ring.

Jaeger-LeCoultre Hybris Artistica was and still is, meant to showcase some of their most significant timepieces, brought together to illustrate their in-house horological and artistic prowess, often in unexpected ways.  This pocket watch, limited to three pieces, definitely achieves this goal, it is a beautiful piece of horology.