A.Lange & Söhne’s SIHH 2015 offerings were largely tweaks and updates of models apart from a few notable exceptions, but that’s not necessarily a bad thing. In the case of the new Datograph Perpetual in white gold with a dark grey dial, this is a good thing. This (is) was a very beautiful watch, and the minor tweaks to it are guaranteed to have broad appeal.

For such a still relatively young brand, the fact that Lange have managed to produce in its short life the Datograph, arguably one of the most significant chronographs of modern times is testament to the strength of the brand. The first ‘edition’ of the Datograph Perpetual had a white gold case and grey dial, but as noted, it’s about the small updates. Had anyone tried to mess around too much with the watch there would be no doubt some hue and cry about it.

The new version is now sans Roman numerals (which works for me), matching the pink gold/ white dial version. The case is still 41mm. 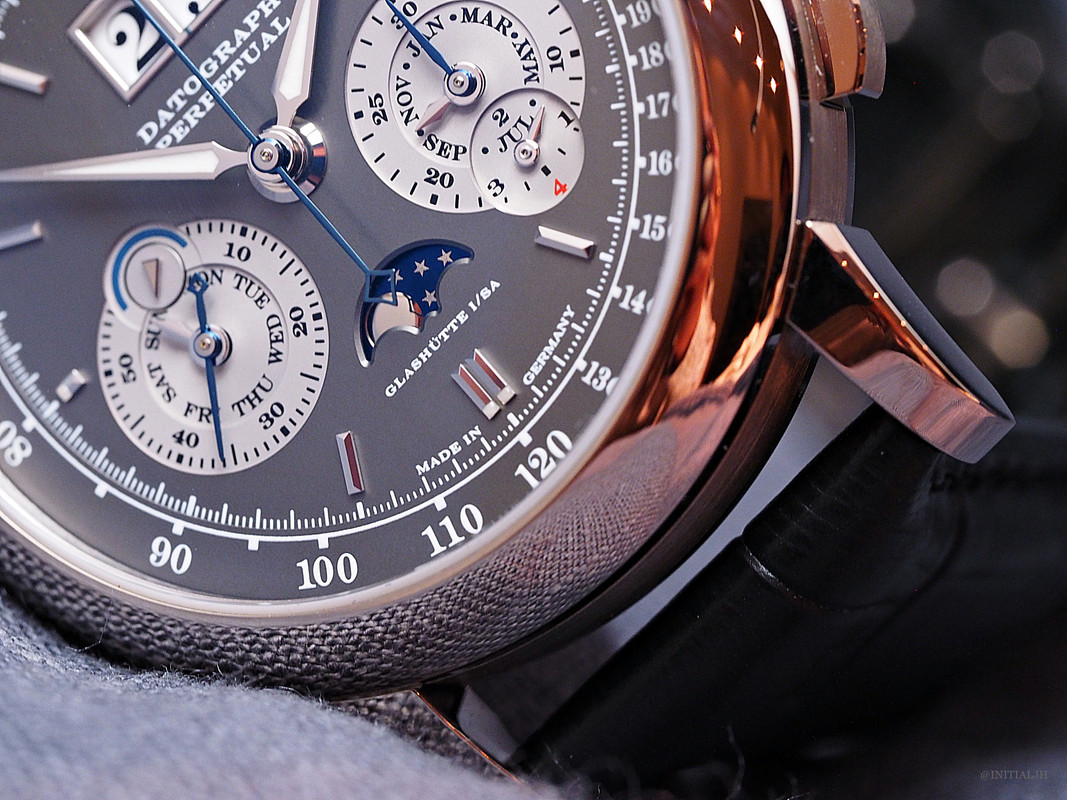 The basic layout of the dial remains the same, with indications are located inside the sub-dials, the outsize date still at 12 o’clock, the moon-phase indicator at 6 (replacing the power reserve of the Datograph), the months integrated into the 30-minute counter at 3 o’clock. There is a so-discreet-that-you-need-it-pointed-out-to-you day/night indicator at the top of the small seconds/ day indicator at 8-9 o’clock and a leap-year (sub) sub-dial below the 30-minute counter sub dial at 3-4 o’clock. Beautifully balanced though the dial is, for those like myself who are shortsighted and whose eyesight is only deteriorating with age, this requires a certain amount of peering intently at the dial. 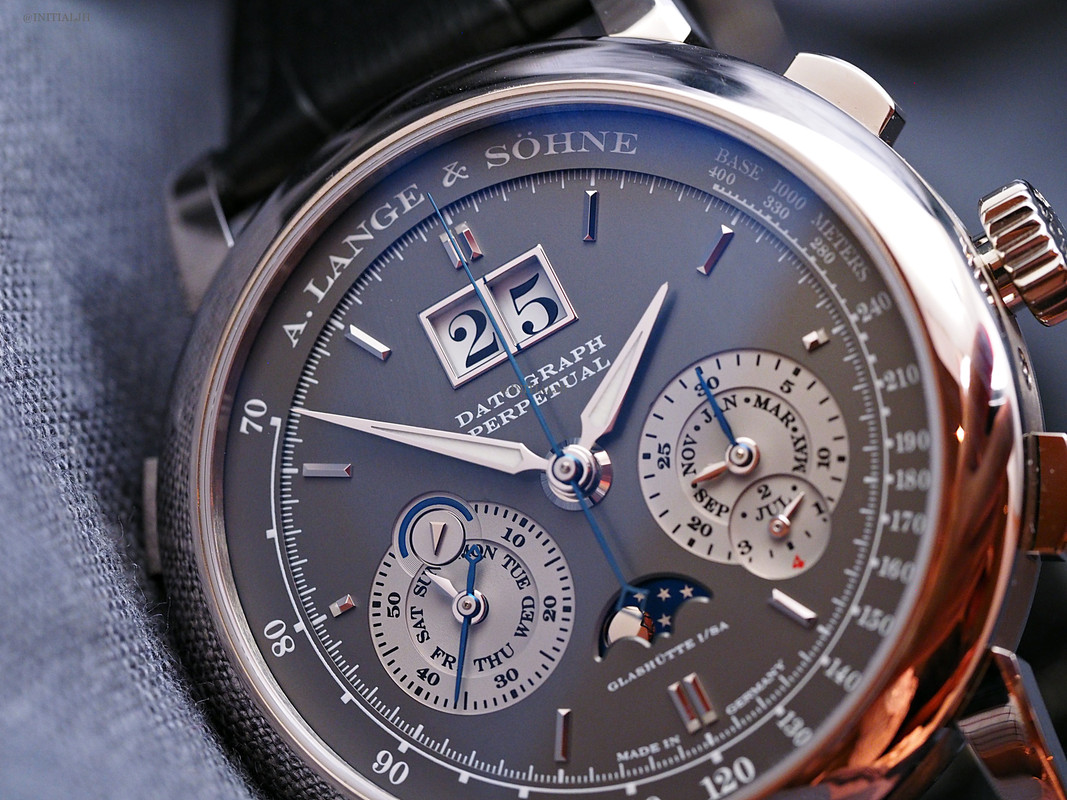 On the gorgeous dial are baton hour markers, hour and minute hands in rhodiumed gold, a chronograph hand in blued steel and matching hands for the minute counter and seconds hand.

All calendar displays can be advanced via a correction pusher, and three recessed correctors allow the displays to be adjusted separately. 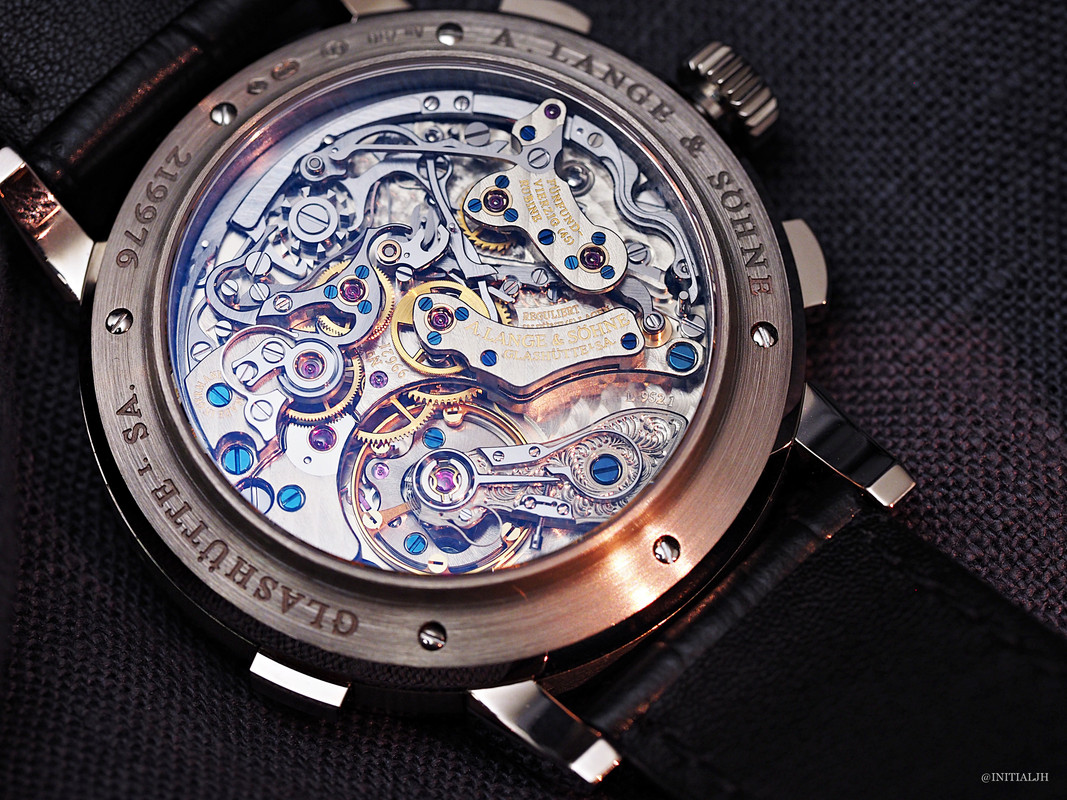 Inside is the manual-wind Calibre L952.1 (column wheel chronograph), visible through the caseback and with a power reserve of (unfortunately) only thirty-six hours. However, this low number can fairly much be forgiven when you look at the beauty of the 556 parts of the hand-finished German silver movement with its blued screws.

This addition to the Lange collection, based as it is on already immensely popular predecessors, is guaranteed to be every bit as successful as its progenitors.