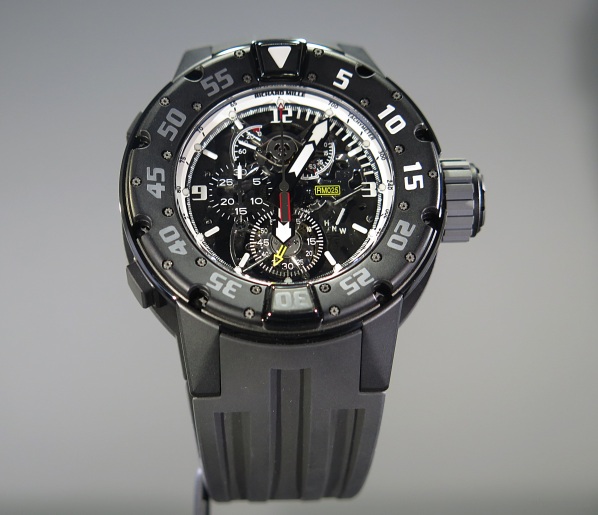 Some of you may be familiar with the RM025 Tourbillon Chronograph divers watch that was released in titanium with lugs in 18K red gold. Well Richard Mille being the king of ‘light’ watches, it was perhaps par for the course that a carbon version would be made as well, and although unfortunately I did not get to handle it, I did manage to see it in its amazingly well lit (especially for photographs) display a few months ago.

The RM025 (and to have the designation on the dial is always a handy thing, I find) contains the Calibre RM025 (also handily named), a manual wind tourbillon movement with hours, minutes, chronograph functions and indicators for power reserve (50 hours) and torque.

At an almost intimidatingly big 50.70mm x 19.10mm it has a tripartite case with the lugs integrated into the case’s torque screw system. It is water resistant to 300m. Its crown is torque limiting to prevent accidental overwinding. The word ‘torque’ features a bit in how Richard Mille describes the RM025, with the additional presence of a torque indicator on the right of the movement’s barrel to supply information about the tension of the mainspring.

On the dial at 4 o’clock you will see an indicator with the letters ‘W’, ‘N’ and ‘H’. These letters stand for ‘winding’, ‘neutral’ and ‘handsetting’ and serve to indicate which of the three settings the watch is in when the crown is pulled out for operation, serving as a handy reminder to its wearer about putting it back into the ‘N’ position as much as being a helpful guide for crown positions. The chronograph part of the movement is a column wheel (in titanium), which is operated via the pusher at 8 o’clock. It is reset via a pusher at 10 o’clock.

The bezel has a whopping twenty-two screws, is unidirectional and contains an additional screw system attacing it to the watchcase as part of this. Unlike the titanium/ red gold version, this carbon one does not have the five minute markers of the first quarter in red for greater visibility, but in white, with the remaining numerals in a light grey. As the original choice was for legibility and contrast, perhaps maintaining the red might have been more useful, although admittedly it is highly unlikely that this function will be used by RM028 owners. 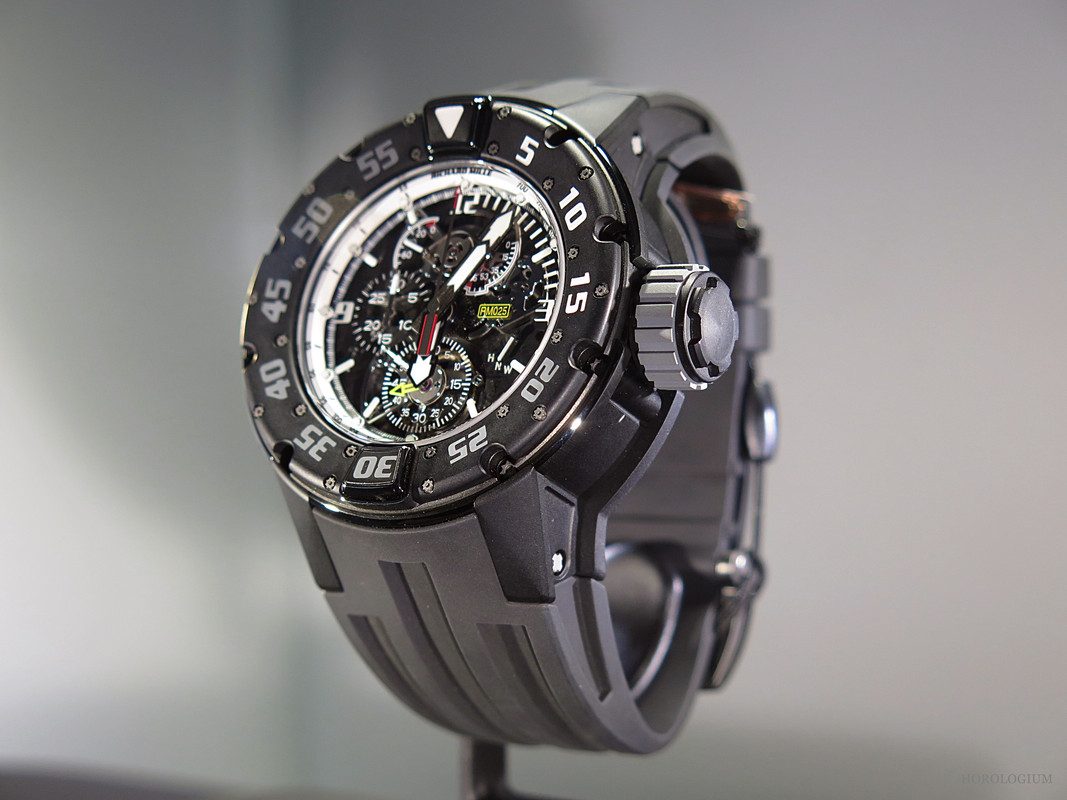 The movement is 38.95mm in diametre with a thickness of 8.12mm and 21,600 VPH. The tourbillon is 12.30mm. The baseplate is made from carbon nanofibre, a composite material moulded at a pressure of 7,500 N/cm2 and a temperature of 2,000C to give it physical and chemical stability. One of the reasons for the choice of this material was Richard Mille’s belief that the stability of this composite ensures that the movement’s going train is also more stable under a wider variety of conditions. In terms of the movement’s finishing, there is a considerable amount of hand polishing, sapphire blasted finishing, champfering, circular finishing, and burnishing.

Attaching this beast of a watch to your wrist is a strap made of perfluoroelastomer Kalrez® which purports to reduce absorption of foreign bits and pieces including chemicals, as well as being waterproofed and resistant to the negative effects of temperature changes, namely heat. The strap is manufactured by Biwi SA.

It is a given that the Richard Mille brand is not for everyone; for price point reasons, for size reasons, for aesthetic reasons. But there are no doubts about the influence the man and the brand has had on modern watch design, the boldness of his take-no-prisoners vision, and that the placement of his watches on the wrists of some of the world’s top sporting professionals such as Rafael Nadal, Yohan Blake and Bubba Watson has made the brand known to even a non-watch demographic. With the imminent appearance of the brand in Australia, something which I’m sure many watch lovers would not have forseen, it will be interesting to see how it Australians take to it.