At SIHH 2012, IWC’s presence was the most talked about, the rather humbly named ‘booth’ a no-cost-spared (partial) reproduction of an aircraft carrier, complete with flight deck, officers’ briefing room, pilots’ locker room, and even a flight deck control room.

Last week, I was given the opportunity to take a look at some of these new IWC models, and two of them stood out for me.

First up is the Pilot’s Watch Chronograph TOP GUN Miramar has (Ref. IWC501902). 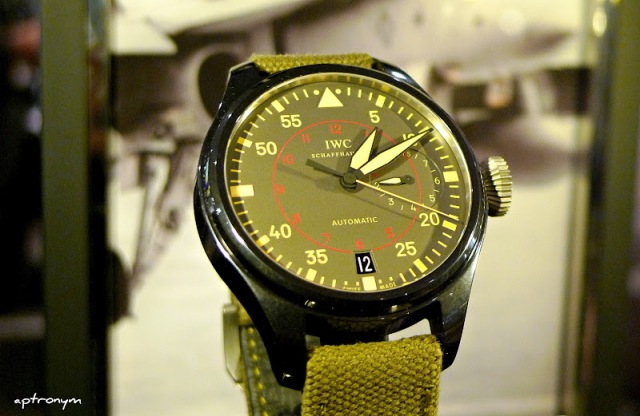 At 48mm and with a height of 15mm, this is not a small watch. The dark grey ceramic case is polished, with a titanium caseback, which is matched in the buckle for the strap. With their largest in-house calibre the 51111 inside, there is a 7-day power reserve, with the display at 3 o’clock.

When the two MIRAMAR models were launched, people seem to be quite divided about how they felt about them. One of the things that has been mentioned has been the size. A 48mm watch sounds far too large for most people but to me, this one seemed to sit smaller than a 48mm, feeling almost like a 46mm.

The polished case gives it quite a noticeable sheen which perhaps to some degree, is at odds with the rest of the watch; I would probably prefer a matte case, as has been used before by IWC. Another issue that people have been talking about has been the colour scheme on the dial. I found the military-styled dial and colouring of this watch quite different ‘in the metal’ to photos. In fact the colouring you see in this photo looks a bit different to how it looks in natural light. What did surprise me about this model is that I felt more positively disposed to it after seeing it.  It looks better than it does in photos, but it’s not a discreet watch, in terms of size and colouring. Of the two MIRAMAR models, I prefer this one, as the date window on the chronograph is of the three-dates-visible type, which I’m not that keen on.

Next up is the Pilot Worldtimer (Ref. IWC326201) with its 24-hour ring and featuring 23 locations on the outer ring. It is housed in a 45mm (13.5mm high) stainless steel case inside which is the automatic Cal. 30750 movement, which has a power-reserve of 42 hours. The seconds are hacking and there is a 6 bar water resistance.

In the photo below, the UTC (current Universal Time Coordinate) is set for London. For cities which are on daylight saving time, the time can be read below the dot linked to the city name with a line. If local time is changed on the dial, the time shown by the 24-hour ring remains unaffected and the movement continues to tick along during the change. 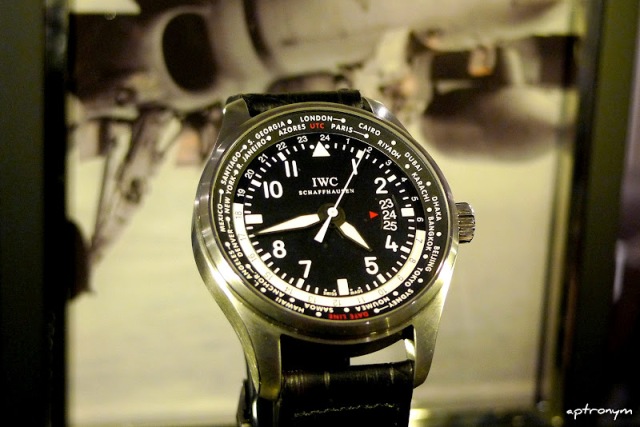 This is a good solid functional world timer. There are no unnecessary bells and whistles, you get exactly what the name states. As I mentioned above, the ‘three date’ style of window is not my preference, especially for a dial that’s already quite busy, but the use of a red marker does the date easy to see at a glance.

I often mention how a watch sits on the wrist, as many of us will read a size and mentally make a decision as to whether it’s excluded from consideration because it’s too big/ small. It’s not always that easy. I’ve seen watches that are 45mm sit more comfortably than ones that are 42mm, for example. This 45mm Worldtimer is one of those 45mm watches that seems to sit smaller than its size. If you’re looking for a world timer and like the look of IWC’s one but are unaccustomed to wearing such a large watch, I’d suggest that you test it at a retailer, you might be surprised.

This final watch wasn’t in the SIHH 2012 pilots’ releases, but here it is, because it’s an attractive watch, and part of the current collection. The Portofino Chronograph Laureaus Sport for Good Foundation edition (Ref. IWC391019) is IWC’s sixth Laureus collaboration, with the dial the Laureaus blue, representing hope. 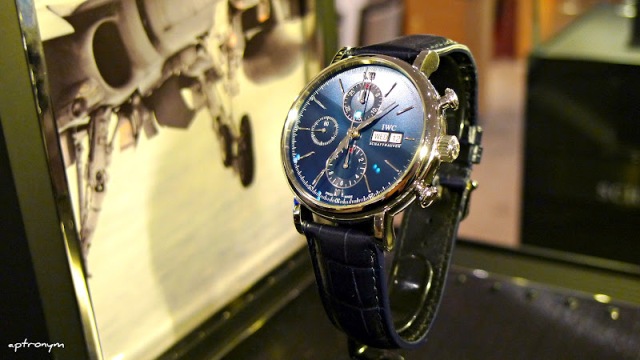 A classic Portofino chronograph designwise, it’s a comfortable 42mm and 13.5mm high, with the Cal. 75320 and a 44-hour power reserve. As well as the blue dial and matching blue alligator strap, the other distinguishing feature is the engraved caseback relating to the Laureaus Foundation. It’s produced in a limited edition of 2,500 and not a bad looking attractive watch; the blue is quite deep and discreet and for its size, it feels almost like a 40mm watch.

Here are some final shots of some of the other 2012 IWC releases. 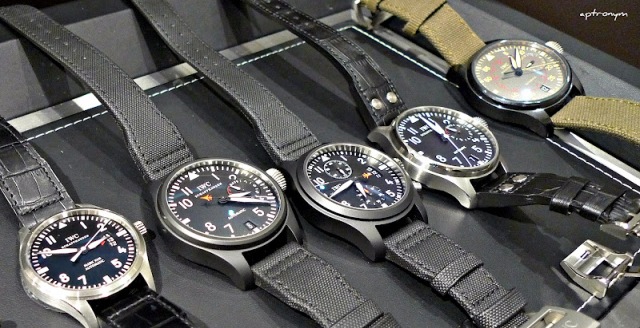 Many thanks to Ching and The Hour Glass in Sydney for the opportunity to have a look at these new models.