The Protana – the original ‘spy watch’

Who isn’t intrigued by even the mere mention of spy and espionage devices? Whether we’re talking about the over-the-top comedy of Maxwell Smart’s shoe phone, the reality of miniature cameras hidden in cigarette packets, or even the poison tipped umbrella used by the Bulgarian secret services, spy gadgetry and methodology is eternally fascinating. Last year’s publication of MI6: The History of the Secret Intelligence Service 1909-1949 by Prof. Keith Jeffery revealed that during the First World War (1915, to be exact) Walter Kirke, deputy head of military intelligence at GHQ France, wrote in his diary that Mansfield Cumming, the first chief (or “C”) of the SIS was “making enquiries for invisible inks at the London University” and that,several months later, C notified Kirke that the best invisible ink is semen, as it did not react to the main methods of detection (especially iodine vapour) and would be easy to obtain.

A very desirable and rare Cold War spy artefact has come up for auction – a Protana Watch Spy Recording Device, which comes with the complete set of Minifon surveillance accessories that it came with when they were first sold in the 1950s for US$350.

The Minifon, developed in the 1950s by Monske GMBH, was an miniaturised battery operated magnetic recording device. It could not (initially at least) record a full range of sounds and was thus limited to voice recording, but it did offer a portability that had hitherto been unavailable.

Although not originally intended as such (it was meant to be a dictation machine), it became popular for surveillance work. It had a recording time of one hour, and weighed three pounds, costing US$289.50.
The one being auctioned is the Minifon Pocket Wire P-55 kit, a special wire recorder marketed directly to espionage and intelligence organisations, police departments and private detectives. 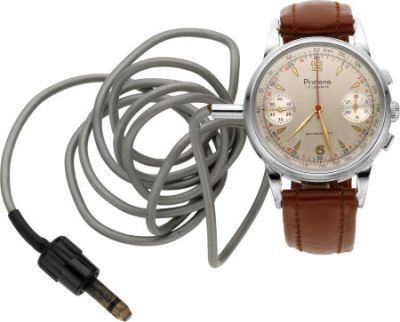 This updated recorder was smaller than the other versions of the Minifon and designed for covert use. However, you could not play back anything that had been recorded. The kit consisted of the P-55 Pocket Wire Recorder, a regular Minifon for playback and several covert mics, one of which was made to look like a watch, although it did not function as one.

The watch-microphone was attached to wires that ran up the wearer’s arm, connecting with the recording device, which stored sound on a fine 0.005 mm diameter 2.9km long nickel-chrome filament that was itself stored in a reel that was 4.5 mm in diameter. 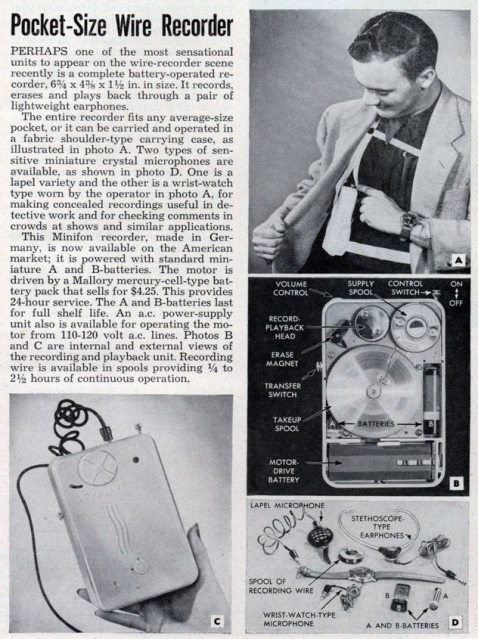 Here are the details of the one that is being auctioned, as described by Heritage Auctions.

This lot includes the celluloid “Minifon” P-55 reel to reel tape recorder, minifon speaker and ear set all in the original leatherette cases. 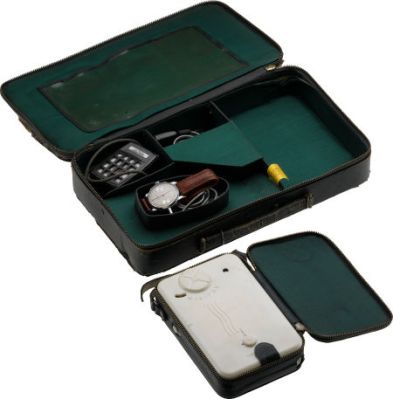 This fabulous bit of Cold War history is being auctioned by Heritage (New York Signature Timepieces Auction #5074). Absentee bidding is already underway online, so get your bids in at this link. Absentee bidding ends: May 2, 2011 at 10:00 PM CT (US time).

Like Loading...
‹ The Thalassa – no longer just blue
George Tyler ‘clock watch’ presented by Queen Anne to the Earl of Cromarty ›