This time it is Tissot which has reached back into its archives for a historically-inspired chronograph revival. However, unlike the Bulova Parking Meter Chronograph, they’ve kept an eye on the movement as well.

Whether you call it an update or a reinterpretation, the new Telemeter 1938 has its inspiration in the chronograph worn by Vital Thiébaud during a ski race in Villars-sur-Ollon, a village in Vaud that is still known for its skiing, eight-four years ago.

The brushed and polished 42mm stainless steel case has a crown with a fluted edge, like a flattened onion crown.

The Telemeter 1938 has a familiar 1930s dial design, with two railroad sub-dials, one for the running seconds and another for the chronograph’s 30-minute counter, and the surrounding scales. 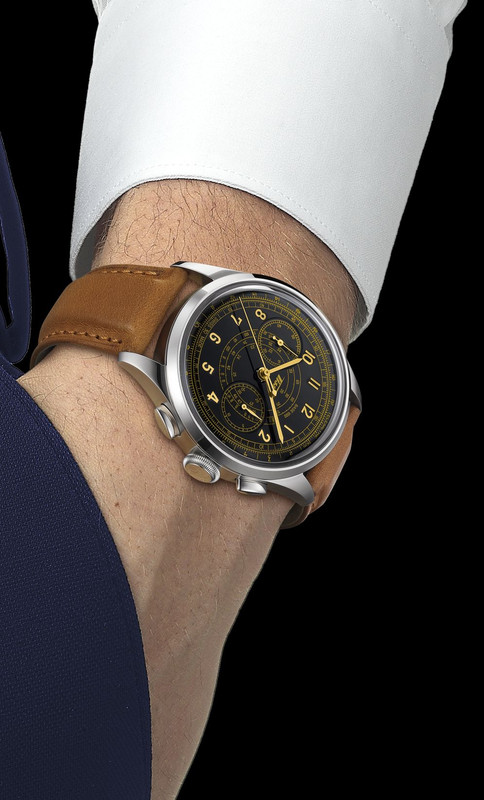 In the centre is the red spiraling tachymeter scale. The minutes scale is read off by the blue or gold sword-shaped central minute hand. Around the dial’s outer edge is a telemeter scale. Inside the Telemeter 1938 is the newly upgraded automatic Valjoux A05.231 with a Nivachron™ balance spring, a new ‘Tissot Heritage’ rotor, and 68 hours of power reserve.

Coming on either a black or brown calfskin strap, the Australian RRP is $3,100, providing an affordable option for those looking for a vintage-styled chronograph with a solid movement. So – what was happening in the ski scene there around the time of the inspiration for this watch? Well in 1936 the first ski lift in Switzerland was built at the ‘Combe’ on the Chaux Ronde (a mountain in the western Bernese Alps), overlooking Villars-sur-Ollon. By the time of the Tissot chronograph that inspired this 2022 piece, Villars was considered to be one of Europe’s finest ski resorts.

If you want to know more about the current ski scene there, you can go to this website. If you are not the cold weather type and prefer to visit during at other times, Montreux is nearby, or you could go to Aigle for the castle.