Tool watch stalwart SINN has launched the new 103 Classic 12 limited edition to mark sixty years of the brand. The 103 pilot chronograph was their first aviation-oriented watch, developed in the mid 1960s. These early models had acrylic glass and a manually-wound movement, but the 103 series has expanded and incorporated SINN’s technological developments over the subsequent decades.

This anniversary model remains a ‘classic’ chronograph in name and function (but also with a date). Along with the hours, minutes, and small running seconds are a date and the chronograph functions, all in a ‘panda’ dial form. However, a ceramic bezel insert makes its inaugural appearance in a 103. The bezel features a twelve-hour scale to display a second time zone, with hour ratcheting. The engraved numerals on the bezel are the same colour as that used for the three sub dials and the lume. The indices are rhodium-plated and luminous, as are the hour, minute and chronograph function second hands. The dial is a glossy black electroplated with a sunburst pattern. 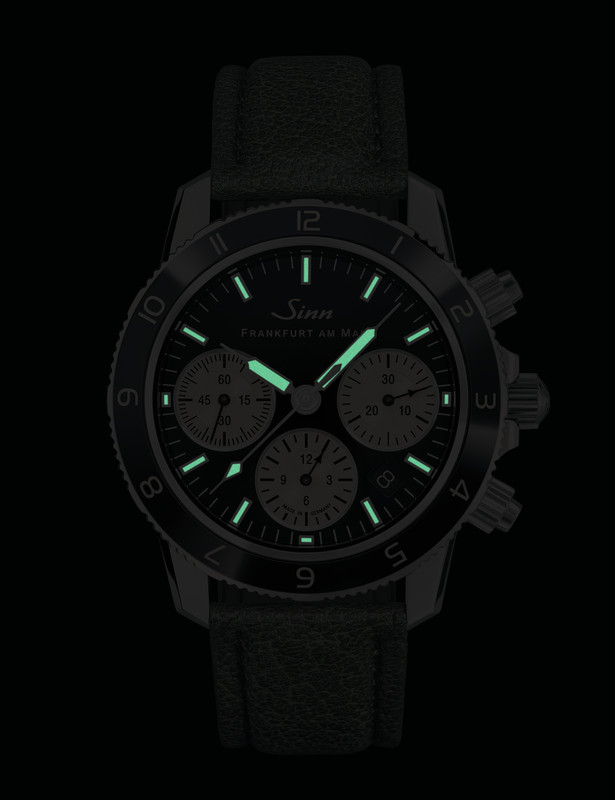 The 103 Classic 12 limited edition comes in a 41mm stainless steel case with a water resistance of 2 bar. It also has SINN’s Ar-Dehumidifying Technology. This limited edition comes in a special commemorative box with a dark green wild boar leather band and an additional black cowhide leather strap with alligator print embossing, along with spare pins and a strap change tool.