Earlier this year URWERK added the UR-100V Blue Planet to its UR-100 collection, and with the arrival of the second Geneva Watch Days, it has launched another new addition to this family – the UR-100 Electrum. As you can tell from the model name’s absence of a ‘V’, this new model is a variant of the original UR-100 family, which had started with the UR-100 SpaceTime.

With a case made from the eponyomous alloy, it is in a limited edition, and rather than the usual expectation that Elecrum will be yellow gold and silver, this new watch has a case made from gold and palladium.

The case is 49.7mm x 41mm x 14mm, and a bright yellow because of the use of (satin-brushed) 18k 2N yellow gold. Urwerk have made many watches featuring highly textured cases over the years, and the deep curved grooves of UR-100 Electrum continues in this vein.

If you don’t know and want to read up about the inspiration and genesis of the UR-100, which stretches back to the final years of the 19th century, read our original post.

The UR-100 is inspired by a clock that measures the distance of the Earth’s rotation at the Equator. Using the brand’s classic orbital satellite hours and minute ‘hands’ with an open-worked carousel, it displays both time (hours and minutes) and space (distance travelled). However, rather than what we are all familiar with i.e. the arrow-tipped minute pointers on the hour satellites disappearing after 60 minutes to be followed by the next, the UR-100 minute arrow passes beneath and between the subsidiary indications, reappearing to display the distance travelled on Earth, and distance travelled by Earth. The indications are orbital hours; minutes, distance travelled on Earth’s equator in 20 minutes, distance Earth travels around the sun in 20 minutes.

The indicator at 10 o’clock relates to the distance in kilometres and is based on the average speed of the rotation of the Earth on its axis at the equator, covering a distance of 555 km every 20 minutes.

The satellite hours are titanium, as is the carrousel. The triple base plate is ARCAP. Finishing consists of circular graining, sand-blasting, and bead-blasting of surfaces. There is, of course, the use of Super-LumiNOva on the hours and minutes indications, and markers. 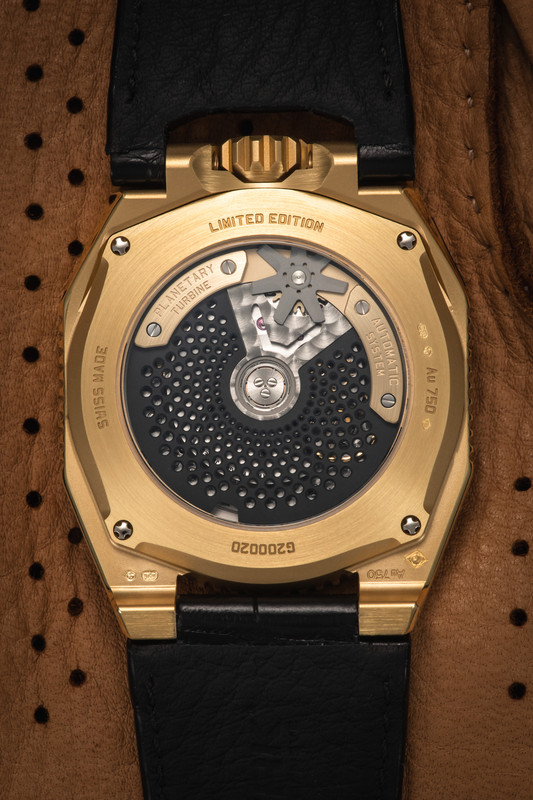 Powering all of this is the automatic Calibre 12.01, which beats at 28,800 VPH and has a power reserve of 48 hours. With three base plates in ARCAP, the movement’s rotor is regulated by a flat turbine system, the Windfäng (Swiss German for “air trap”) that minimises shocks to the rotor and reduces over-winding and general wear and tear.

The new UR-100 Electrum both in colour and form, would not be recognisable to those most well known for its use, in ancient Greece.

Ancient Greek coinage can be divided into four periods: the Archaic, Classical, Hellenistic and Roman. The Archaic period extends from the introduction of coinage to the Greek world during the 7th century BC until the Persian Wars in about 480 BC, and it was during this period that the earliest known coins, made from electrum (a mix of gold and silver) were made and used by the Lydians. Examples discovered under the Temple of Artemis at Ephesus have been dated to between 625 and 600 BC.

Why was electrum used? Well simply because there was a lot of it about in riverbeds (the Pactolus River in Lydia being a major source), and it was highly valued. It was also used for jewellery and other precious items.

In fact there was so much of it that the Lydian kings did what rulers do – they got rich by mining it, selling it, and making coins from it. By introducing these coins into their already thriving commercial hubs they also (unknowingly) also essentially created the first state-based system for the minting and circulation of coins.

Because it was a naturally occurring alloy, the mix of metals (which would also include traces of platinum, copper, and other metals) varied, as did the colour, which ranged from pale yellow to green or even like brass – these final two will be familiar to the bronze watch enthusiasts in particular as it relates to the percentage of copper in an alloy, and oxidation/ patination. 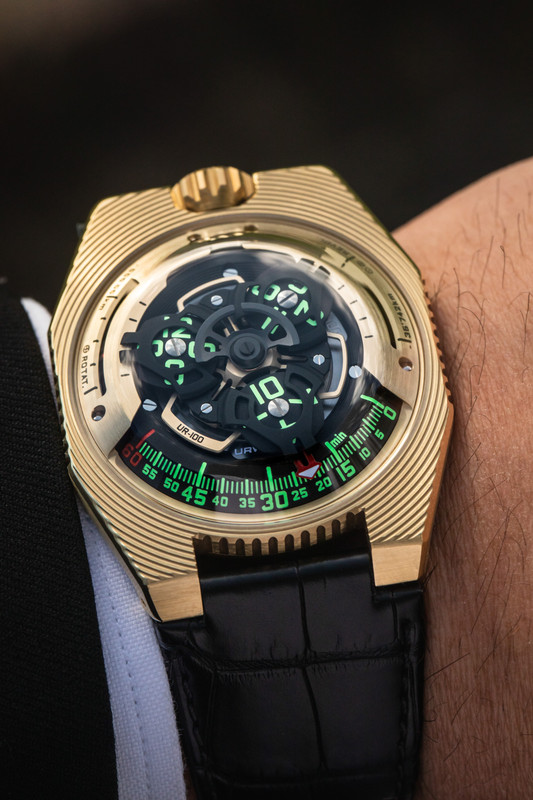 Coming on a leather strap and like its older siblings, in an edition of twenty-five pieces, the UR-100 Electrum won’t change colour and is priced at CHF 62,000.