URWERK has launched a third model for their UR-220 – the SL Asimov. It follows in the footsteps of the UR-220 C81with its case made of 81 layers of Carbon CTP (Carbon Thin Ply), and the UR-220 All Black made of titanium and steel.

Along with the classic wandering hours, the UR-220 collection resurrected the brand’s classic oil change indicator in a revamped and improved form, the first UR-220 was the first URWERK model in this material and weighed 25% less than the All Black,

Now, the third variant of the UR-220 bring with it some changes in materials, colour, and finishing. Plus a lot of lume.

The UR-220 SL Asimov’s case is 43.8mm x 53.6mm x 14.8mm in 81 layers of Carbon CTP and with a water resistance of 30m. The case back is black DLC-treated sandblasted titanium, and both the crown guard and the shot-peened and sandblasted crown are black DLC-coated. Sapphire crystal is used on both sides of the watch.

The UR-220 SL Asimov watch displays the time using luminous truncated pyramid-type hour transporters. The cube shape featured in previous versions of the UR-220 resulted from meticulous work on URWERK’s CNC machines.

The UR-220’s rotating wandering hours satellites are shaped like truncated pyramids, and as per usual, grouped in fours at the end of carrousel arms. When it is the relevant ‘hour group, they are inserted into an open-worked minutes pointer, which then travels across the 120° arc of the retrograde minutes scale. At the 60th minute the pointer jumps back to zero, where it is picked up by the next hour.

These elements are cast from a silicon mold and developed by RC Tritec. The hours transporter is aluminium, and the central carrousel and screws are Grade 5 titanium. The sand-blasted carrousel and its cage have a circular satin finish and are black rhodium-plated. The hours are made of Super-LumiNova® Grade X1 BL. The minutes pointer is aluminium with a bronze counterweight. 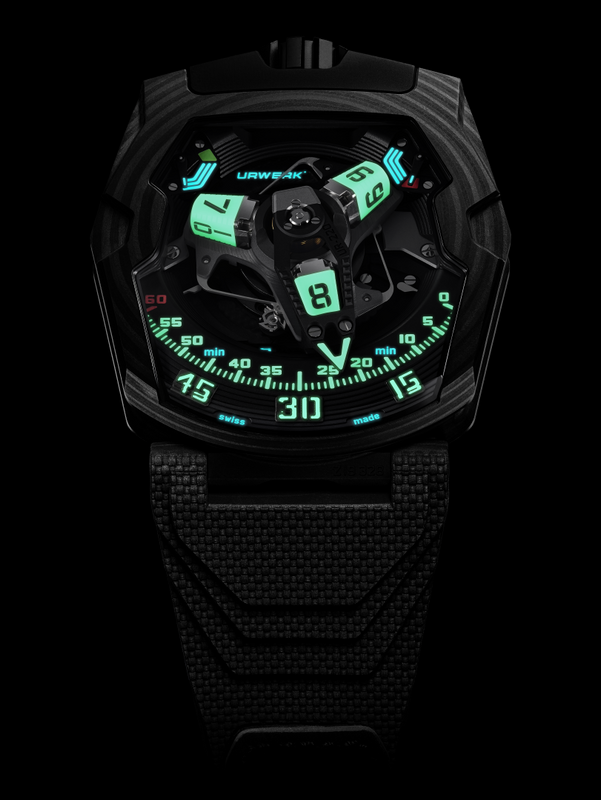 The dial has a power reserve indication on two 24-hour gauge-like sub dials at the top, which have a total of 83 components. During manual winding, the gauge on the right is the first to indicate the mainspring degree of wind. Once it has reached its maximum measurement, the indicator on the left takes over. These two indicators are black shotpeened, and the power reserve bridge and module are black circular grained.

The Super-LumiNova® components are yellow for the hour transporters and hour-markers, white-glowing blue for the two power reserve indicators, and green and red for the 60-minute marker and the end of the power reserves. 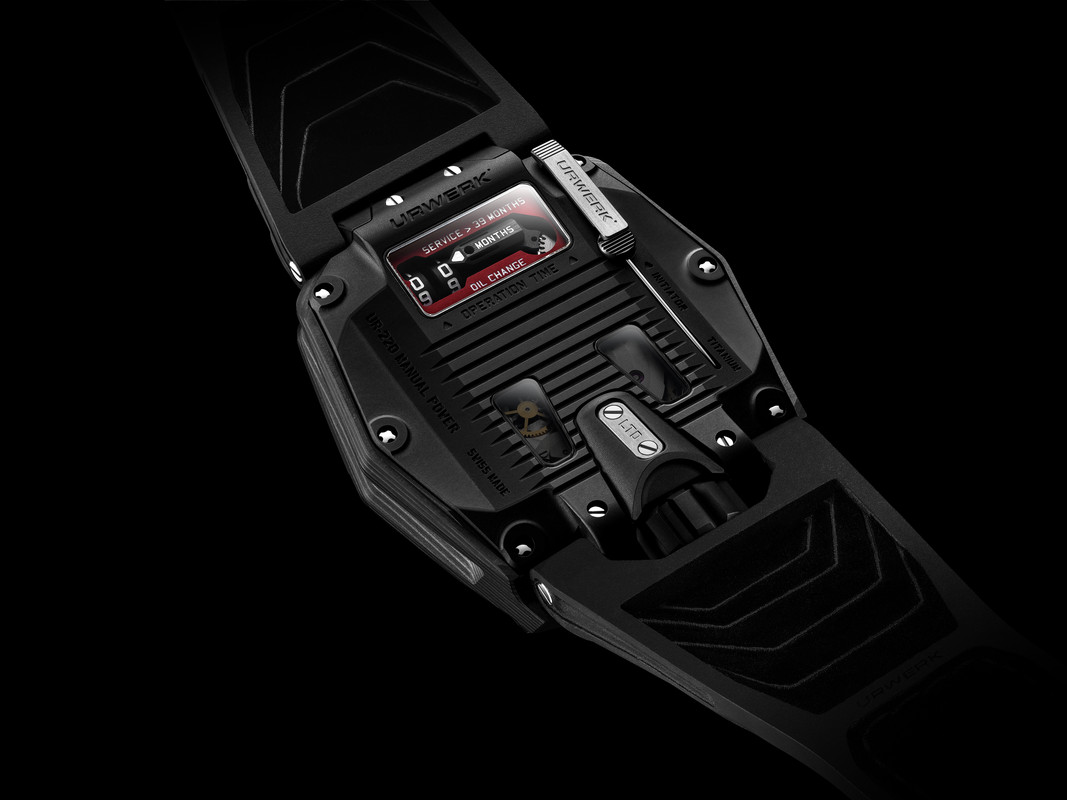 The back of the UR-220 SL Asimov features a digital “Oil Change” gauge appearing on two adjacent rollers. The wearer starts the function/ count by removing a pin and pressing a pusher. The counters that display the running time in months is then activated. Service is recommended after 39 months, at which point URWERK will reset the counter and replace the pin. The pin is satin-finished with sandblasted engraving, with a polished needle.

Powering all of this is the manually-wound Calibre UR-7.20, which beats at 28,800 VPH and has a power reserve of 48 hours. The base plate is in ARCAP P40, counterweight; central spring in steel.

So, what of the name? Well Martin Frei is the man behind the design and other decisions for the Asimov, and URWERK somewhat cryptically mentions Asimov’s ‘Nightfall’ (1941) and this quote –

Someone clawed at the torch, and it fell and snuffed out. In the instant, the awful splendor of the indifferent Stars leaped nearer to them.

On the horizon outside the window, in the direction of Saro City, a crimson glow began growing, strengthening in brightness, that was not the glow of a sun. The long night had come again.

A novelette by American writer Isaac Asimov about the coming of darkness to the people living on a planet called Kalgash with six suns and perpetual sunlight. A group of university scientists warn of impending darkness, that its suns will start to set. A simultaneous eclipse of all the suns, an event that occurs only every 2049 years, is imminent. With historical evidence that civilisation seems to have been destroyed approximately every two thousand years, the question is whether they are causally linked.

Coming on a Vulcarboné© cured rubber strap with a black DLC-coated buckle and Velcro© fastening, the RRP is CHF 147,000.