At the beginning of this month we wrote about the new limited edition1858 Split Second Chronograph Limited Edition 18 in “Lime Gold” from Montblanc. It turns out that this was not to be the only new chronograph they would announce in April, with the 1858 Monopusher Chronograph Origins Limited Edition 100 launched at Watches & Wonders 2021.

As is the case with the “Lime Gold” model, the origins of this piece also hark back to 1930s military chronographs, but in a far clearer way than the “Lime Gold”, which is more ‘inspired by’ – this one is a re-edition of a 46mm military monopusher chronograph. The 1930s piece used the Calibre 19-09CH, a movement that had been developed in 1909 for (you guessed it), a pocket watch.

This latest piece is also in a 46mm sized case (thickness of 14.5mm) with a fluted crown with an integrated monopusher for the chronograph as per the historical model. The case is now a bronze alloy which has a combination of polished and satin finishing. The back is screw-down bronze-coated titanium. As you can see in this photo, which shows the original from the Montblanc Museum alongside its 2021 descendant, one notable difference on the dial between the original and this re-edition is that ‘Minerva’ has been replaced by a historical Montblanc logo, although there is a Minerva logo at 6 o’clock. The dial is black lacquered with bronze-tinged beige lumed Arabic applied numerals. The cathedral-shaped hour and minute hands are rose gold, and the central elapsed-seconds hand for the chronograph and those on the sub dials, are white. The hands and numerals are filled with beige Super-LumiNova.

If we look at the bi-compax layout, the small seconds is at 9 o’clock and the 30-minute counter for the chronograph, at 3 o’clock. There is also a railway minute track. All of these, as you can see, are taken from the original model. As well as the case back there’s a bronze-coated titanium officer case back with Minerva engraved on both sides and the inscription “Ré-édition du chronographe militaire Minerva des années 1930 doté d’un Calibre fait main dans la pure tradition horlogère suisse” on the inside. 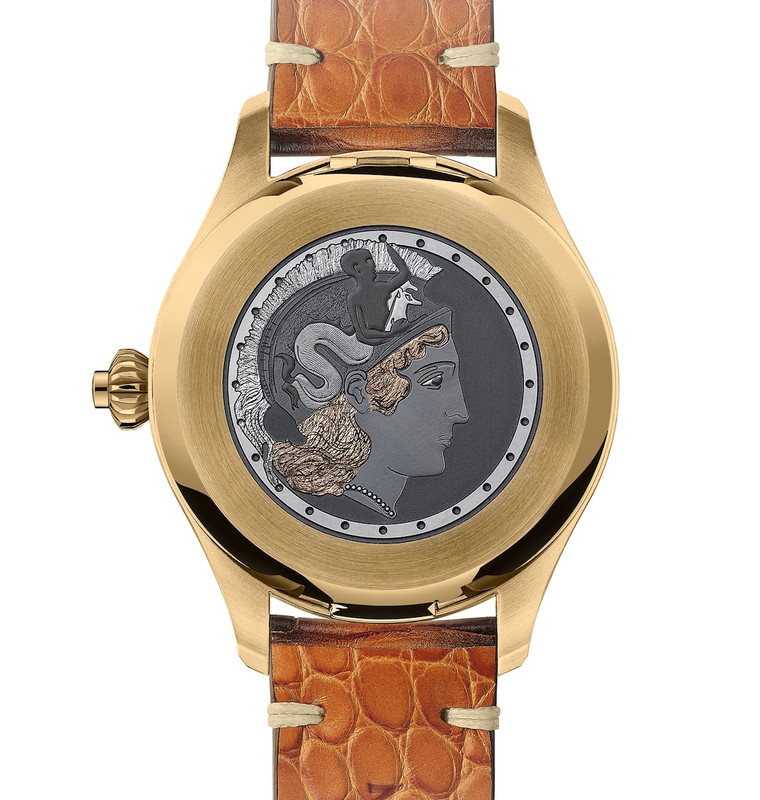 The relief image of Minerva is achieved in a similar way that has been used by Montblanc before – lasering is used to engrave, texture, and notably colour (through oxidation). The angle, distance between the titanium plate and the laser, and the length of the application are what achieves these different colours. We were told by Laurent Lecamp during the press session that Montblanc’s ability to ‘colour by laser’ on such a large surface is the exception rather than the rule amongst Swiss watch brands.

Behind the officer’s case back can be seen the manually-wound monopusher chronograph Calibre MB M16.29, a modern reconstruction of the original Minerva calibre with column wheel and horizontal coupling. It beats at 18,000 VPH and has a power reserve of 50 hours. Like the original 19-09CH calibre, the MB M16.29 features the V-shape bridge. As is the brand’s habit in tributes to historical movements, there is a Minerva arrow. The main plate has raw maillechort (German silver aka nickel silver, which is a copper alloy with nickel and often zinc) with circular graining on both sides. The bridges are also maillechort, with Côtes de Genève. The going train is gold-plated and is circular grained and chamfered.

The Montblanc 1858 Monopusher Chronograph Origins comes on a ‘vintage look’ brown Sfumato alligator strap with beige stitching that has a bronze-coated stainless steel pin buckle. Limited to 100 pieces, the RRP is EUR 30,000.