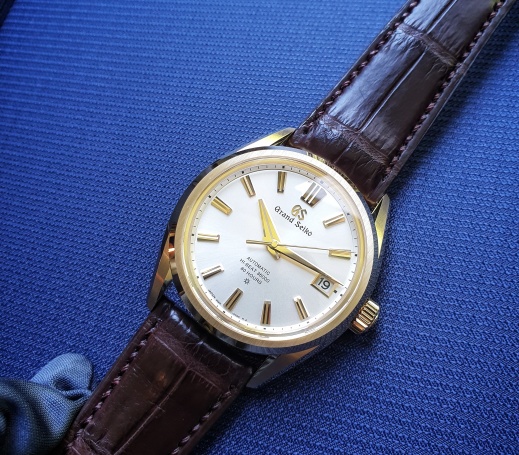 As a year of tumult draws to a close it seems appropriate to look at a watch which radiates serenity – the Grand Seiko 60th Anniversary Calibre 9SA5 Hi-Beat 36,000 80 Hours.

More succinctly known as the Ref. SLGH002, this limited edition has been one of Grand Seiko’s biggest releases for the year, but has somehow still manage to almost be relatively in the background because of its understated exterior.

The key to it is the new high beat movement, the automatic Calibre 9SA5, which will be the foundational point for future Grand Seikos. It has an accuracy of +5 to –3 seconds a day (on part with the existing 36,00 VPH movement), but an increased power reserve of 80 hours thanks to two barrels.

The Calibre 9SA5 has three key new features that are new to Grand Seiko models.

Firstly, the movement has a new in-house ‘dual impulse escapement’ that enables the escape wheel to transmit power directly to the balance for greater efficiency. So – differing from the standard lever escapement, the escape wheel transmits power directly to the balance wheel in one direction of its movement. When the balance wheel moves in the other direction, it transmits the impulse is via the pallet fork as in a traditional escapement. Both pallet fork and escapement wheel are made using MEMS (Micro-electromechanical systems) technology.

The high frequency Calibre 9SA5 uses a new free-sprung balance specifically developed for this calibre that is more shock resistant and retains its precision for a longer period. The balance wheel also uses an overcoil hairspring as opposed to the more conventional flat spring for the brand.

Thirdly, the new calibre is 15 per cent slimmer than existing in-house high beat movements, thanks to the horizontal layout of the barrel and gear trains. 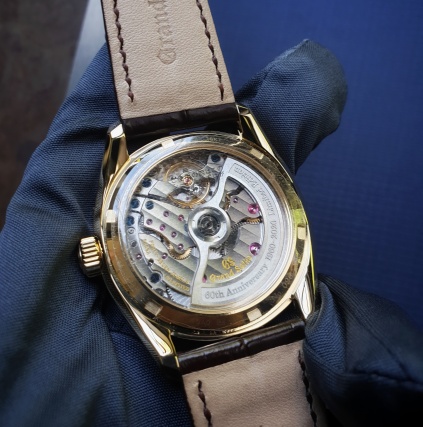 The curved outline of the movement’s bridge inspired by the shapes of Mt. Iwate and a bend in the Shizukuishi River near the studio in which the watch is made. Inspiration from the natural surrounds making their way into Grand Seiko dials and movements has been a recurrent theme over the years. 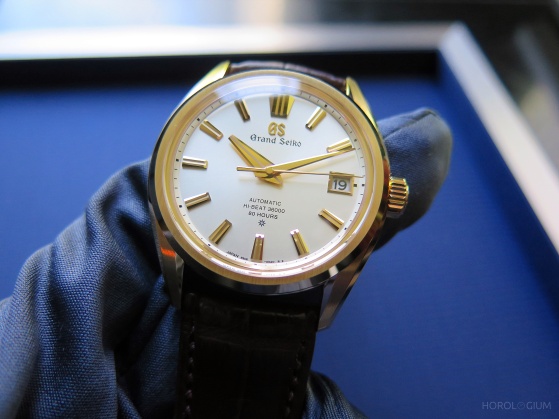 The exterior is a 40mm (11.7mm thick) 18 kt yellow gold case with a water resistance of 100m and magnetic resistance of 4,800 A/m. Beneath the box-shaped sapphire crystal is a silvery-white dial with 18 kt gold faceted hour markers and dauphine hands with a groove running through the middle of the hour hand. The Grand Seiko logo and date window’s border are also in 18k yellow gold. 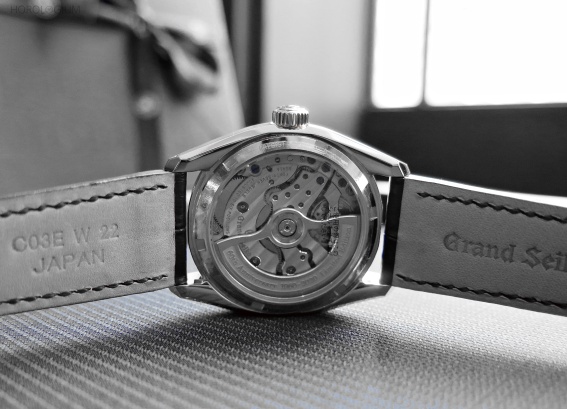 An interesting thing I found about this watch was how it unexpectedly crept up on me. I saw it within the context of a Grand Seiko event during which there were a number of watches on display, but I found myself unconsciously drawn most (and repeatedly) to this, even if we exclude the movement. It has a warm elegance ‘in the metal’, especially in diffused natural light, that cannot be fully appreciated in photos. For some, it is the opposite, but this is one of those watches that looks better in person than in photos.

Coming on a Crocodile strap with a three-fold yellow gold clasp with push button release, the limited edition (100 pieces) 60th Anniversary Hi Beat 36,000 80 Hours is available through Grand Seiko boutiques with an RRP of AUD 64,000.