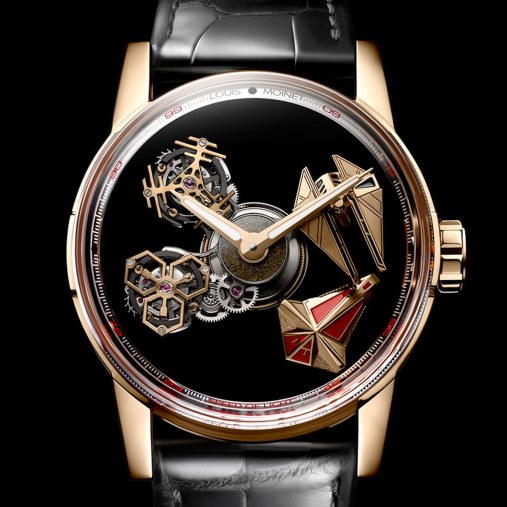 Earthly confines have never held back the making of pocket or wristwatches. This inspiration has come both in the form of complications and of design/ aesthetics, whether this be planetary movements, location of celestial objects, sidereal time, depictions of the sky, watches worn in space, or pieces inspired by the technology of space travel and popular culture. We can’t, of course, forget the popularity of meteorite in recent years, nor of Romain Jerome’s moon dust.

Now, Louis Moinet has joined in with the unusual new Space Revolution with a flying double tourbillon – beneath a sapphire crystal dome are two space ships and two space stations on an interstellar-inspired dial.

As the two space stations (the flying tourbillon cages) revolve nearby, the spaceships ‘face off’ eighteen times an hour. The upper one completes a clockwise rotation every five minutes, and the lower one completes a counter-clockwise revolution every ten minutes. The three-dimensional space craft are titanium, with hand-applied ceramic colour finishing, and weigh less than 0.5g each. 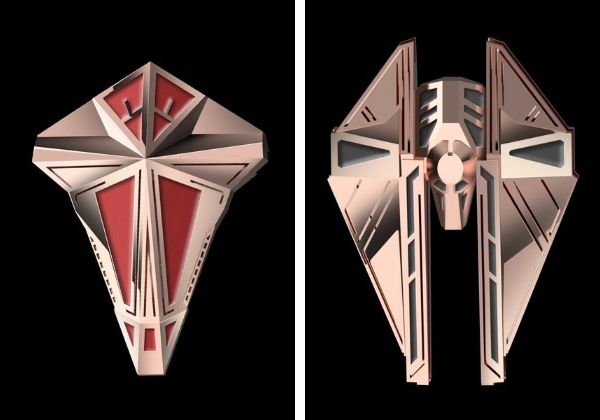 Inside the 43.5mm 18 kt rose gold case is the manually-wound Calibre LM104, which bets at 21,600 VPH and has a power reserve of 46 hours. This powers the hours, minutes, double flying tourbillon satellite and a rotating spaceship. The movement comprises of two oscillators, each equipped with a differential mechanism for greater precision. Each watch has over 470 components and six ceramic ball bearings.

As mentioned, the sapphire crystal above the dial is domed. This is what gives this timepiece a much greater thickness/ height – 18.30mm. In fact the case has had to be designed around this, with the base playing second fiddle to maximise the view through the dome to the spaceships and satellites, from its sides.

This redesign extends to the winding and time-setting functions, with a function selector integrated into the case back.

Other features include the domed sapphire crystal and a deep black dial (there is a black aventurine dial option). To make every one of the eight pieces unique Jean-Marie has incorporated is a central disc with meteorite fragment beneath the open-worked hands. 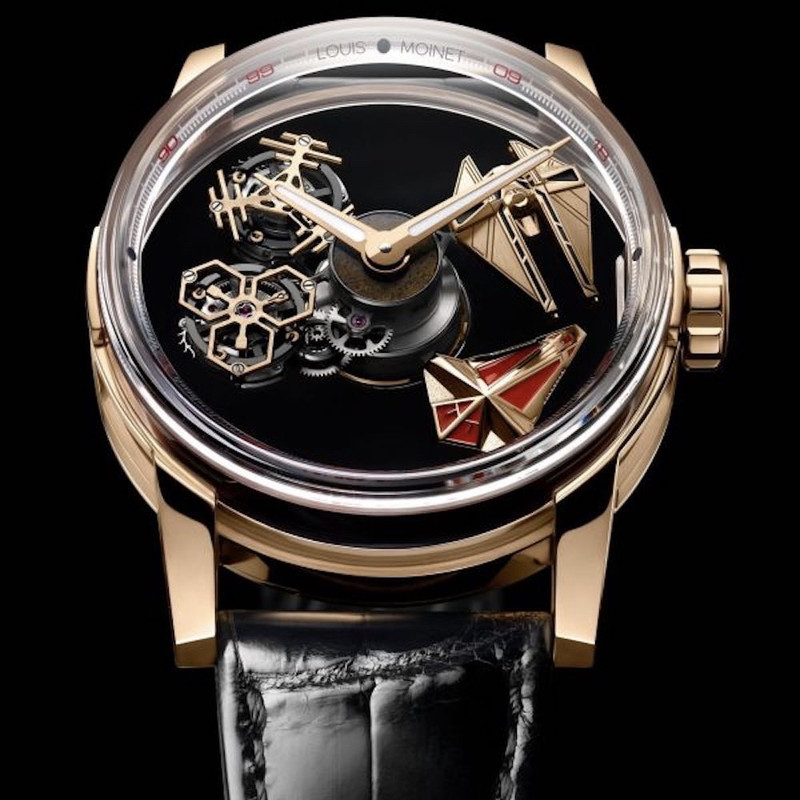 Each individual watch in this limited edition of eight will be different, because of the nature of the meteorite fragment placed at the centre of the dial beneath the hands – one is lunar, one is Martian, and so on. Each different.

The Louis Moinet Space Revolution has a water resistance of 10m and comes on an alligator strap with a matching gold folding clasp. They are POA, so contact Louis Moinet directly for further details.