Known today for its practical and sturdy pilots’ watches, German brand Laco is perhaps better known, in historical terms, as being one of the five brands (the others being Stowa, A. Lange & Söhne, Wempe and IWC) who made the original WWII B-Uhr (derived from ‘Beobachtungs-Uhren’, meaning ‘observation watch’) pilots’ watches for the Luftwaffe. Plotting precise locations during flights was the job of the Beobachter, or observer, who wore a watch over their flight jacket so that it could always be referred to quickly.

Coming in Type A or Type B designs, the former had dials which were black with white indices, white elongated sweep seconds hands, and sword-shaped hour and minute hands. Type B was characterised with a black dial that had hour numerals replaced by five minute increment numbers from 5 to 55, with an inner ring marked 1-12.

Although IWC’s pilots’ watches have become an enduring part of their line up, of the five, Stowa and Laco are the two brands that stand out for steadfastly reproducing/ paying homage to, the B-Uhrs, including 55mm sized models such as the current Laco “Replica 55 B Erbstück” or similar limited editions in the past, a nod to the original size. Laco, in particular, has all manner of sizes, dial colours and movement variants.

Over the years, many brands beyond the original five have released their (smaller) versions of both Type A and Type B designs.

Now, in a segue from this pilot’s watch tradition, Laco have released a new GMT, called the Frankfurt, in either black (Schwarz) or grey (Grau). It was originally offered in a highly successful pre-sale late last year, but is now more generally available.

The 43mm sized stainless steel case of the new Frankfurt GMT has a dark sandblasted look, and a water resistance of 20 atm. 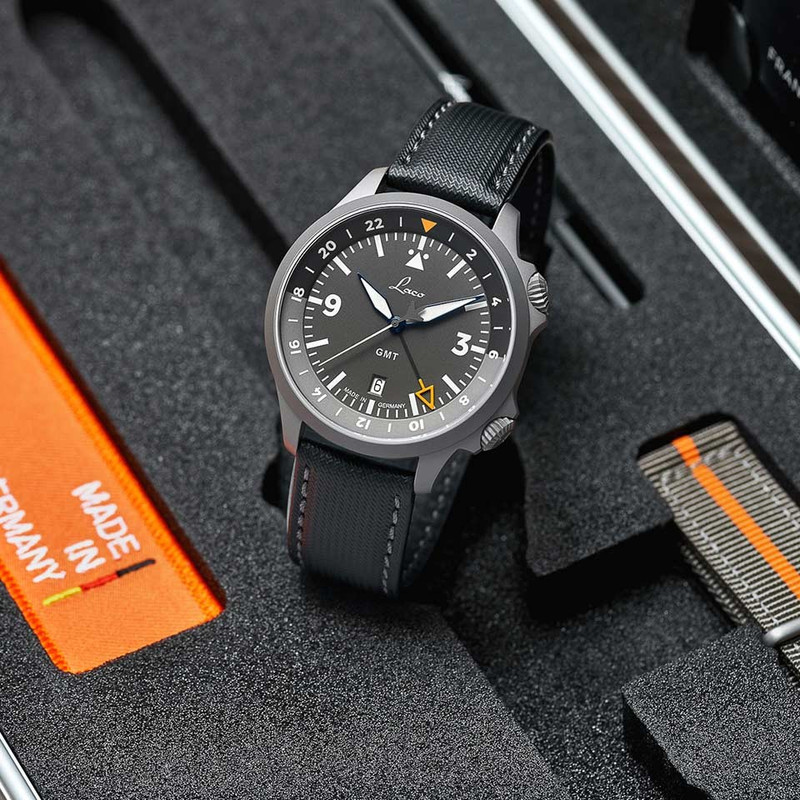 Beneath the domed double curved anti-reflective sapphire crystal is either a matte black or matte grey dial. The numerals, indices, pilots’ watch triangle with two dots, and the thermally blued hands, are coated with Super-LumiNova.

Another aeronautical reference is the small aircraft on the counterweight of the seconds hand. The 24-hour hand with its orange tip and the bidirectional inner rotating bezel allow for a second time zone to be indicated. This rotating bezel is ball bearing mounted and is adjusted with a second crown, with day/ night colour differentiation. 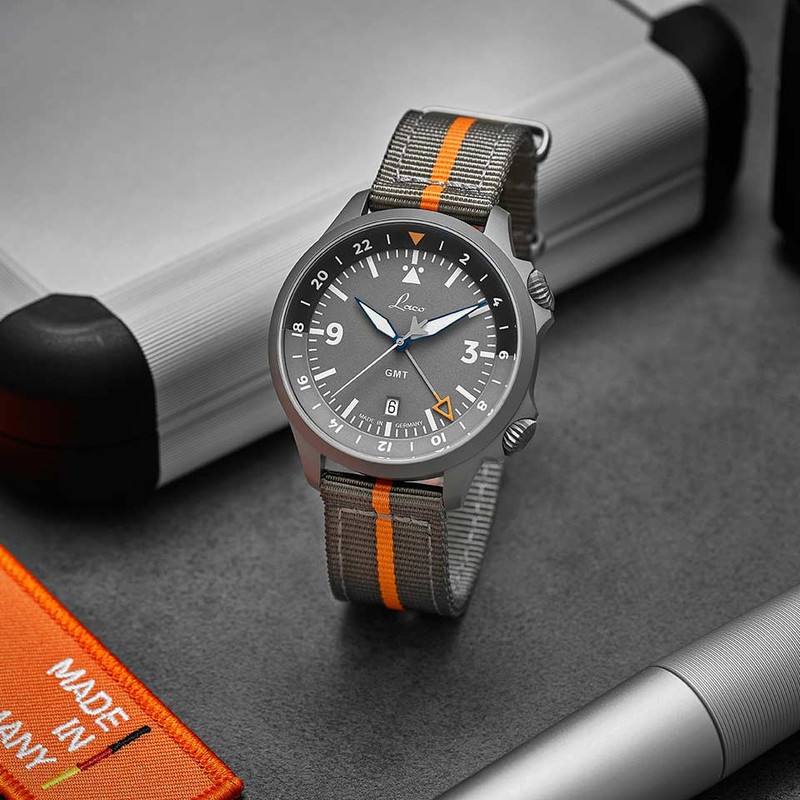 Behind the solid case back decorated with an aircraft in relief is the automatic Calibre Laco 93, based on the ever reliable ETA 2893-2.

Both the Schwarz and the Grau come on a black Nytech strap with a stainless steel buckle.

It is always a bit more  enjoyable to get an entire ‘package’ with a watch. This may not be an expensive watch, but it comes with a lot more than you would usually get at this price point. Each Frankfurt GMT comes in an attractive aluminium box that also contains a two piece nylon strap in orange/ grey, a strap changing tool, and a ‘Remove before flight’ tag. 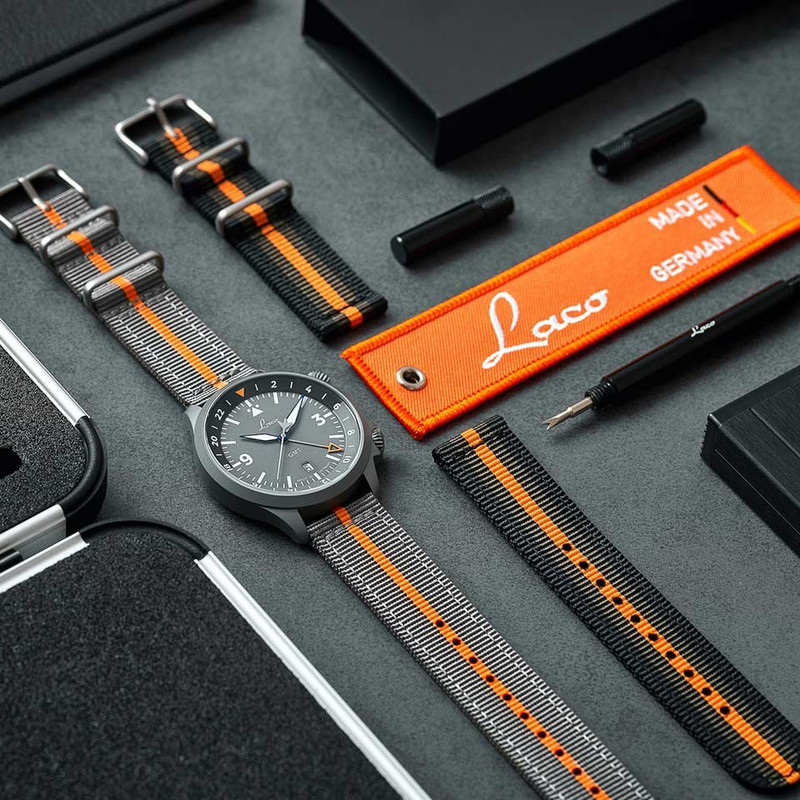 There are also other strap options available for an additional cost. You can also get the watch personalised. An initial 15 character engraving on the side of the case is free of charge, and you can ask for additional engraving, which costs EUR 49.

The Frankfurt GMT Schwarz and Frankfurt GMT Grau are available from authorised dealers or directly from Laco for EUR 1,650 (including tax).