The new Alpine Eagle may be the first new Chopard collection family in a little while, but this new integrated bracelet sports watch has its roots (and design sensibility) in the youth of Co-President Karl-Friedrich Scheufele. Not only is this the first new collection for the brand in a few years, but also it uses a new material called Lucent Steel that was four years in the making.

Chopard is a family brand and the Alpine Eagle is a family watch. Karl-Friedrich Scheufele created the new line after being persuaded to by son Karl-Fritz, with additional lobbying by the latter’s grandfather and aunt. The St Moritz on which it is based was Karl-Friedrich’s own first collection (designed at the age of 22) in 1980, about which he also had to persuade his father to invest in.

As the name indicates, the ski slope oriented St. Moritz line was Chopard’s entry into that luxury sports watch market that had been so successfully revolutionised by other brands. The St Moritz, also primarily steel and with an integrated bracelet, had a distinctive bezel with two screws each at 12 o’clock, 3 o’clock, 6 o’clock and 9 o’clock, with fluted edges around the screws.

The new Alpine Eagle recalls the original, but with an updated design. There are still eight screws on the bezel, but the bezel is now round. The case has discreet ‘ears’ on either side which on the right, also protect the crown. The watches all feature integrated cases and bracelets with satin-finished ingot-shaped links, and a slightly raised and polished centre link. The crown is engraved with the compass rose motif. The hour/ minute hands, and the numerals, are coated with Super-LumiNova. Six of the 10 new models – offered in two sizes (36mm and 41mm), are made of the new Lucent Steel.

You may know of Chopard’s use of Fairmined gold; it is something that we have mentioned a number of times before. With the Alpine Eagle, the steel used is the first example of recycled steel being used in Swiss watchmaking, with 70 percent of the steel coming from this recycled steel. Lucent Steel A223, as it is called, is an alloy that is recreated by re-smelting steel at a higher temperature along with some other ingredients, resulting in a material that is hypoallergenic, stronger and harder than the usual steel (223 Vickers versus stainless steel’s 150), and 50 percent more scratch resistant. It also shines more brightly. It does take handling the Alpine Eagle to get the full glow of the Lucent steel, and you can feel its solidity and quality.

Striking the steel may be, but the dial is where it’s at. The dials of the 41mm models have a sunray-like pattern that is their interpretation of an eagle’s iris. The dials have applied Roman numerals and indices in white gold. The counterweight of the seconds hand, if you look closely, looks like a feather. The avian influence on is worn lightly in its design. 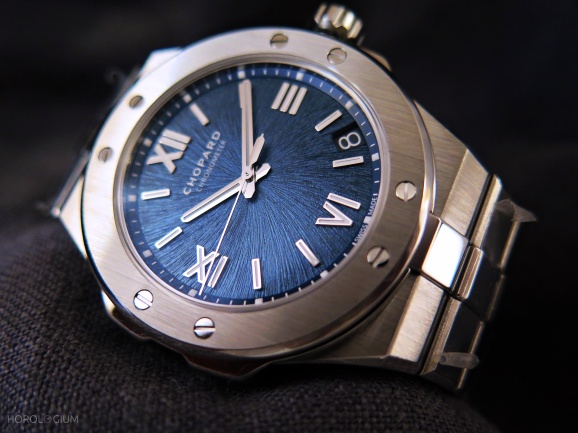 It is the dial texture and the numerals and indices which need a particular mention – it is best to see both under the close gaze of a loupe (I used a Loupe System) to get a proper appreciation of the quality of both. The sharpness of the edges of the latter two; and the detail, beauty and nuances, of the former.

The Moritz were mostly quartz, as it was during that era. For the Alpine Eagle, it’s the in-house automatic COSC certified Calibre 01.01-C for most models (the smaller one has the Calibre 09.01-C, which is also COSC certified). The 01.01-C beats at 28,800VPH, a stop seconds, and a power reserve of 60 hours. vibrations per hour and the Calibre 09.01-C has a power reserve of 42 hours. In terms of movement decoration, bridges have a snailed motif, and there is a circular-grained main plate.

The new collection is named for a bird that is indigenous to Switzerland and was once more common than it is now. Chopard is supporting a programme (the Eagle Wings Foundation) to reintroduce the Alpine Eagle back into the wild. So in wearing one, you get to support both this and the use of recycled steel. 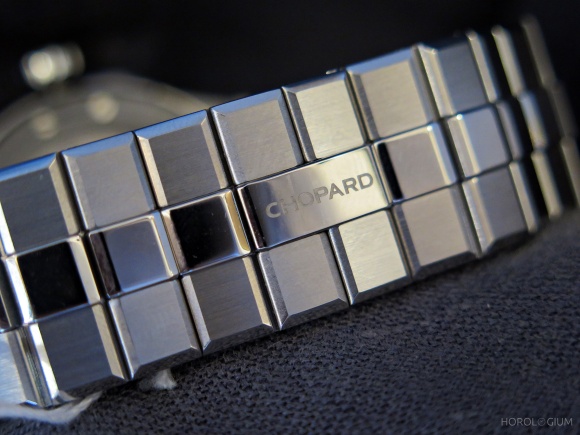 In the case (both literally and figuratively) of the Alpine Eagle, I found my belief that watches need to be handled if possible before firming up on view, born out. I was quite ambivalent about it on its release. Even seeing it through the window of the Sydney Chopard boutique didn’t really shift me from my thought that this is a nice luxury bracelet sports watch if you’re looking for one at that price point and with a bit of history and material interest, but it didn’t grab me. It actually took me a little while before I could arrange to see them ‘in the metal’ and it was only then, and especially under a Loupe System, that I gained new found appreciation.

Although they are at different price points, there were a lot of comments made at the time of its launch referencing the Royal Oak, the Nautilus, the Ingenieur, and even the Overseas. Whether such comparisons even between the ones just cited can (or should) be made is a discussion for another day, but the Alpine Eagle is very much its own beast, not least of all because it has a lower starting price point. You can argue about integrated luxury sports watches endlessly, can argue about the Genta pieces endlessly, but when you handle the new Alpine Eagle, you can feel and see its quality. There were no corners cut on this.