When a new Métiers d’Art model is announced by Vacheron Constantin, with it comes both high expectations and a high aesthetic bar to meet. This year’s ‘Les Aérostiers’, a collection of limited edition pieces that tell the story of the early days of flight in France between 1783 and 1785, are a sumptuous and elegant addition to this collection family. Earlier this year, we were fortunate enough to be able to spend a little time with them.

Paying tribute to the development of hot air balloons and the pioneering adventurers (the aérostiers) who captured the attention of the (not just French) public at the time are five timepieces (each in limited editions of five pieces) that, like their Métiers d’Art siblings, are works of art on the wrist. In this instance, they are showcasing the work of hand engraving, sculpted gold, and enamelling.

Each watch in the series depicts a pioneering balloon, and is named after the location and year of the flight.

The ‘Versailles 1783’ marks the flight of the balloon designed by Jacques-Étienne Montgolfier who, along with his brother Joseph-Michel, were renowned as inventors of a style of hot air balloon named for them. The wealthy paper manufacturers had a particular interest in aeronautics and piloted flight. 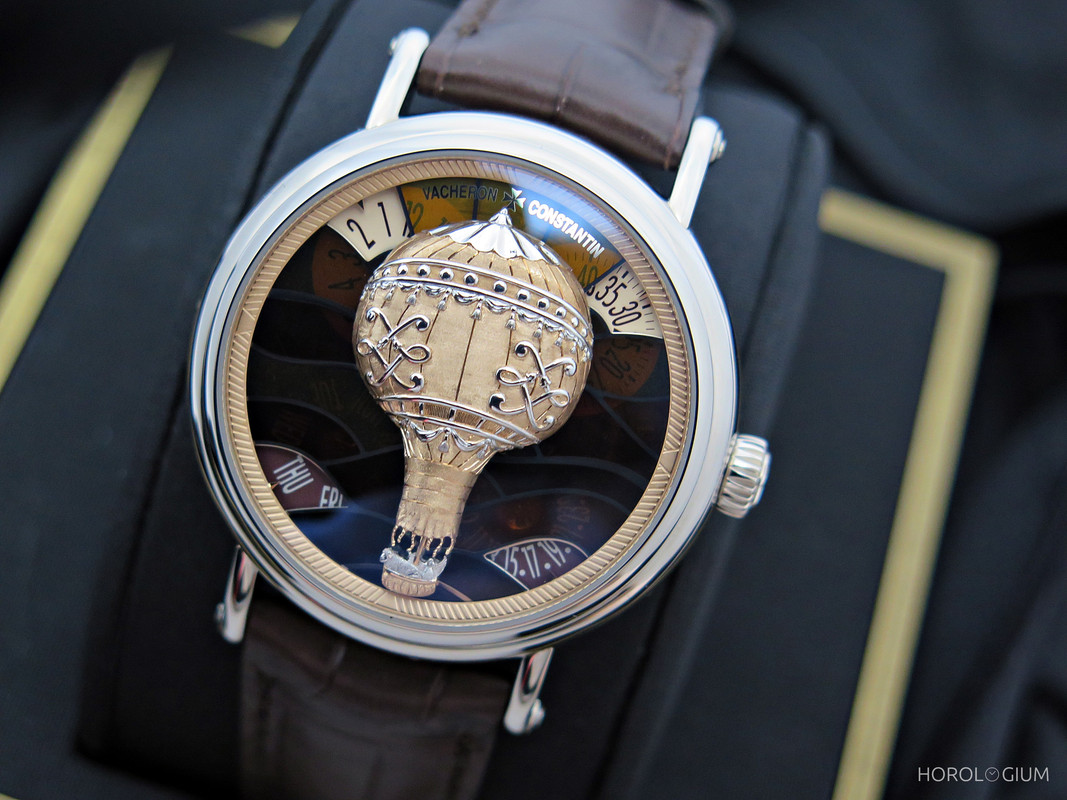 The flight commemorated by this new watch shows not just the balloon, but if you look carefully, you will also see that the basket is occupied by a sheep, a rooster, and a duck. These three balloon mates were, unbeknownst to them, to become a part of the early history of flight, with their presence a means by which it could be ascertained as to whether humans might be able to safely breathe at various altitudes. For some reason, the sheep had a name, ‘Montauciel’ (‘climb-to-the-sky’), but its feathered companions did not. The balloon itself was 37,500 cubic feet of taffeta coated with a varnish of alum for fireproofing, and it covered 3km in eight minutes, reaching an altitude of 460m in front of a crowd including King Louis XVI and Queen Marie Antoinette. 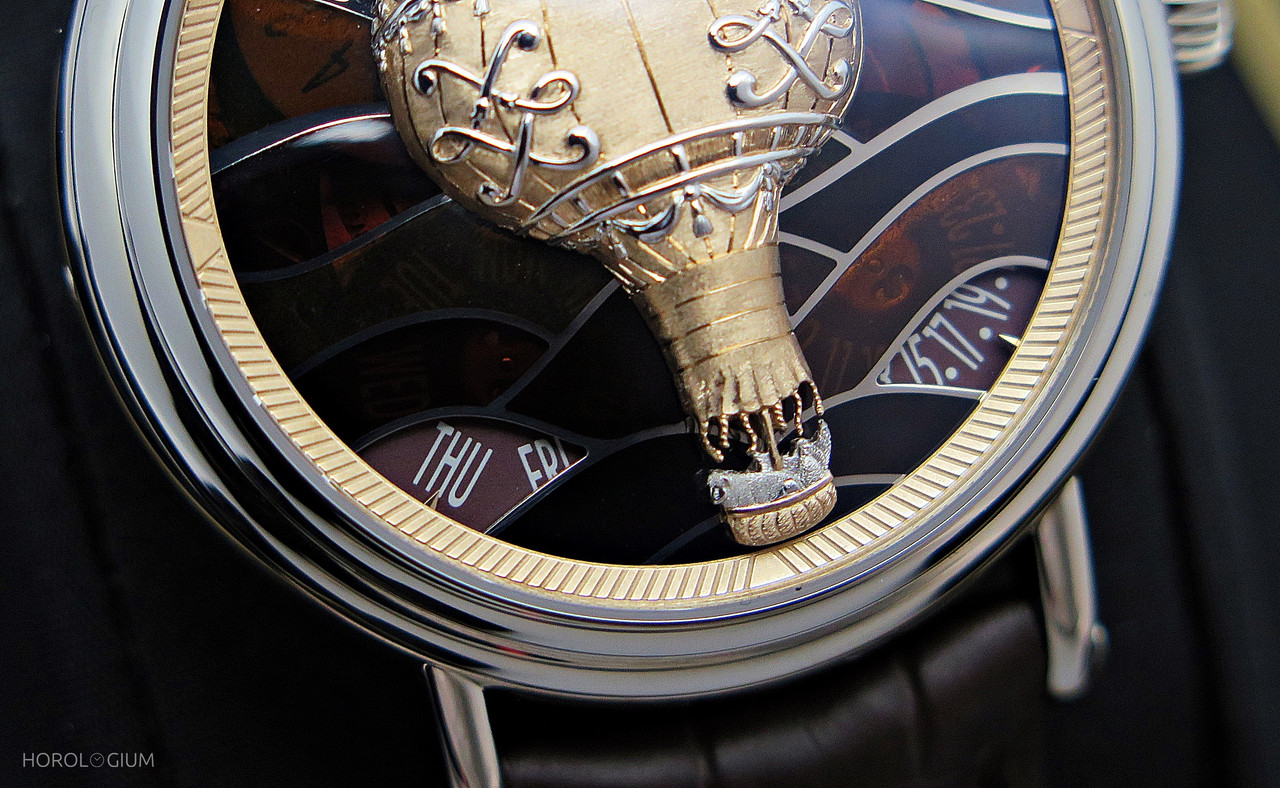 The realism of the scene extends to the depiction of the frayed ropes from the balloon’s landing.

After the successful flight of Montauciel, rooster, and duck, who would no doubt be pleased that their exploits are still being remembered in the 21st century, the Montgolfiers became more ambitious. The ‘Paris 1783′ watch commemorates the brothers’ first first balloon flight by a human. In the basket are two humans, representing Pilâtre de Rozier and Marquis François d’Arlandes, who were the passengers on that flight. The white and pink gold balloon has an abundance of intricately engraved design elements, including suns, fleur de lis, garlands, signs of the zodiac and an eagle. 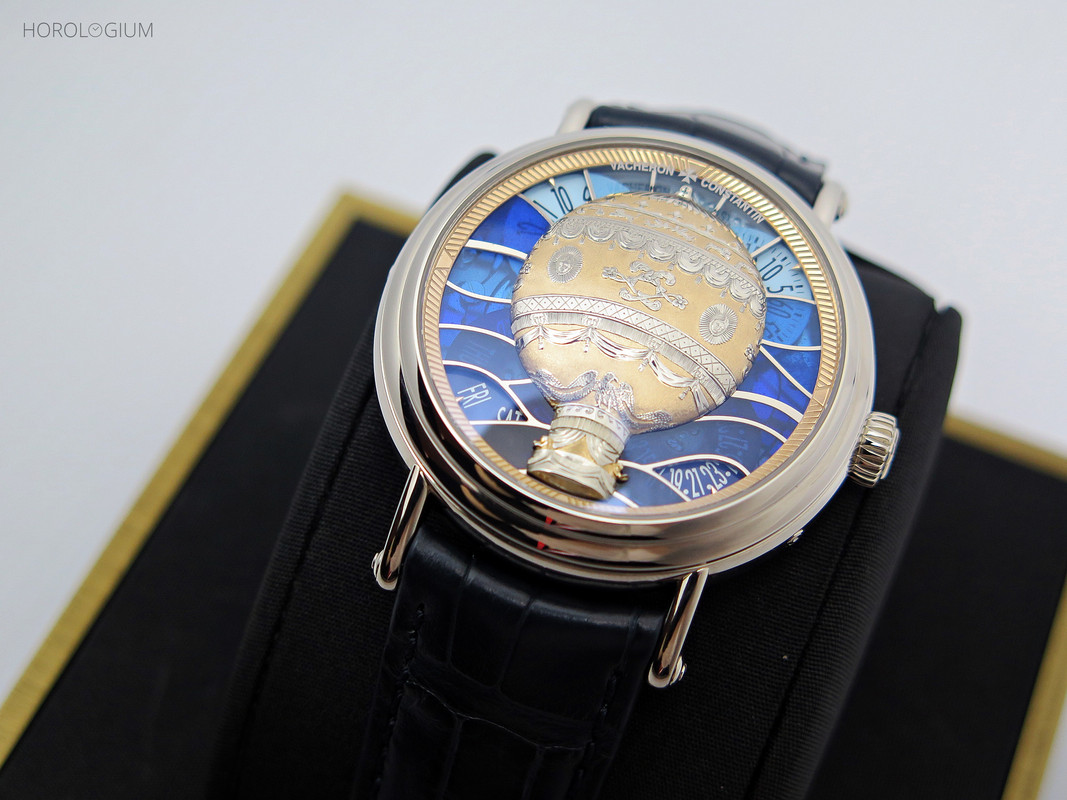 The third piece in this new collection is the ‘Paris 1784’. It commemorates the work of inventor and balloonist Jean-Pierre Blanchard, who designed an unusual balloon with a winged carriage. He believed that the wings would aid in both flight and navigation. 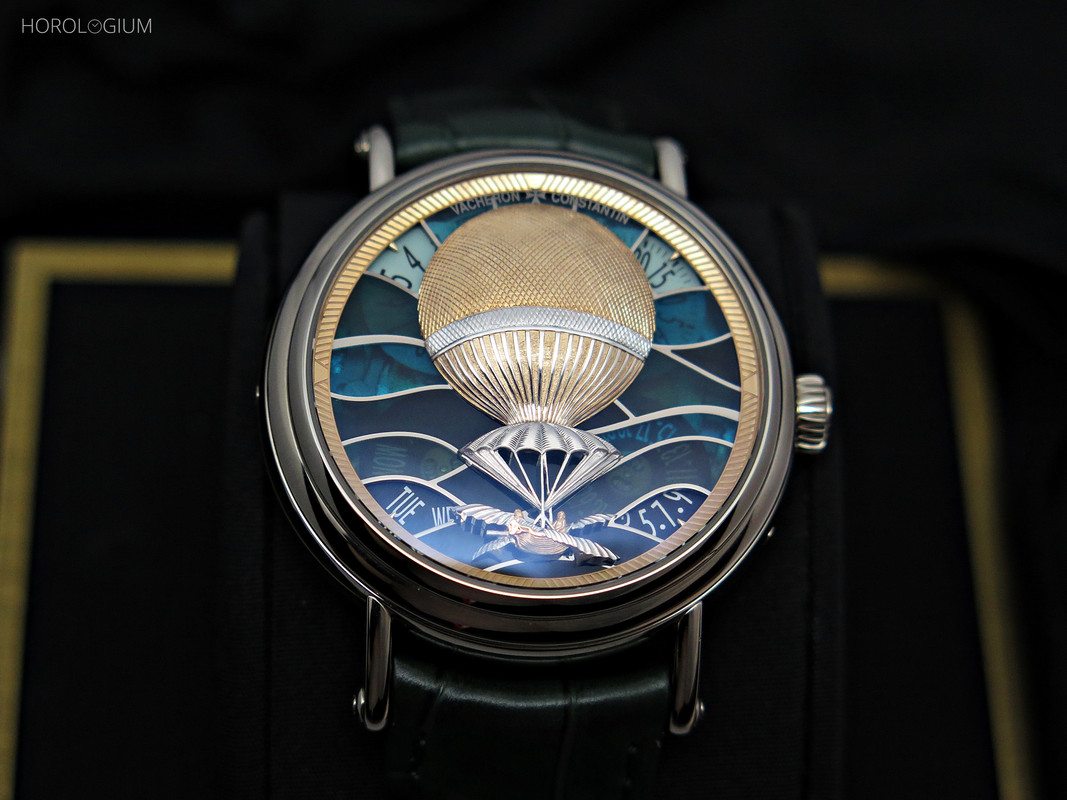 It didn’t, and he moved to England the same year. After another failed attempt at using the wings, he and another man managed to make the first flight over the English Channel, taking about 2½ hours to travel from England to France on 7 January 1785, flying from Dover Castle to Guînes. Louis XVI was so pleased that the balloon was put up on display and Blanchard awarded a generous pension. Blanchard holds the record for the first balloon flights in Belgium, Germany, the Netherlands, and Poland.

Next up is the ‘Bordeaux 1784’, in an apt colour scheme. Vacheron have stated that this is inspired by a three person flight that took place in this region in that year, but Bordeaux was a popular ballooning experimentation location. Jean-Pierre Blanchard flew from there that year, a couple of people had failed attempts, and three gentlemen named Antoine Darbelet (a lawyer), Jean Chalifourt (an architect) and Jean-Baptiste-Alexandre Désgranges (a merchant) managed two successful flights with self-built balloons in the style of Montgolfier ones. The balloon on the watch is, again, highly decorated in its engraving, including mythological references. 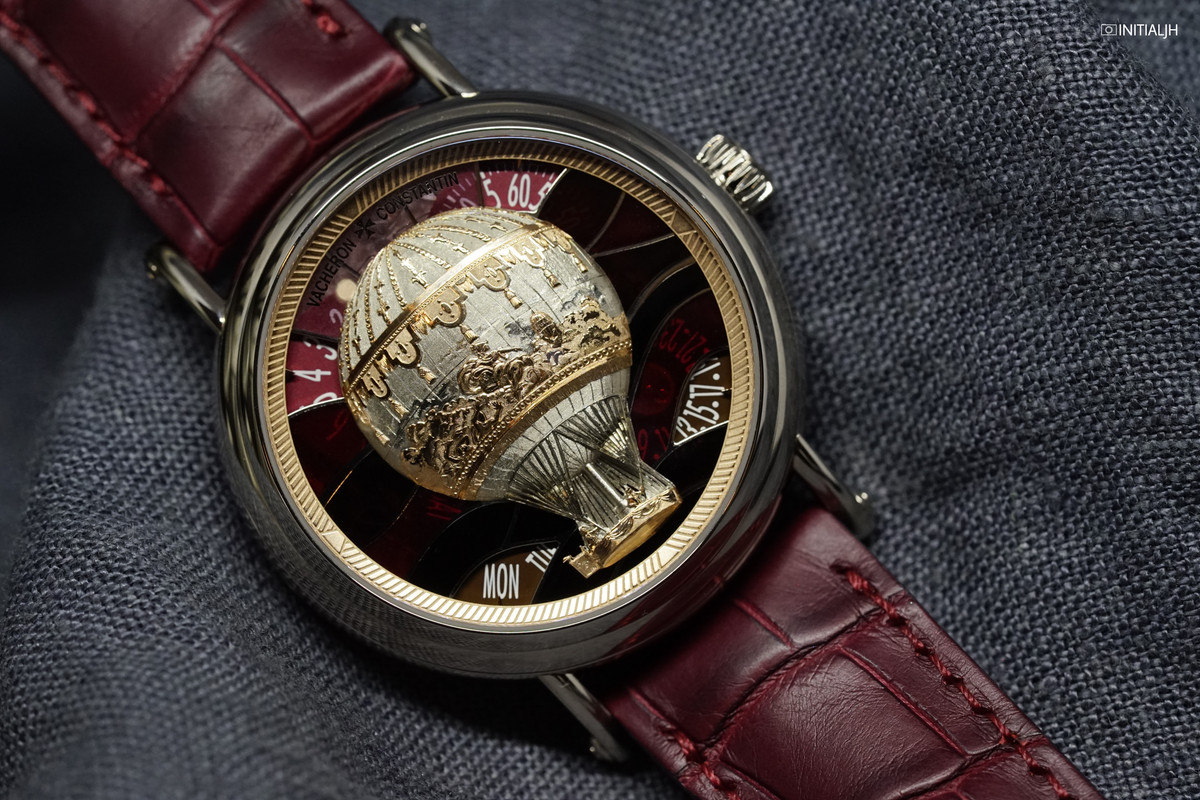 Finally, the ‘Bagnols 1785’ is named after the village of the same name, and marks a flight that was witnessed by some 10,000 spectators there in that year. Vacheron have not given any specific details of the particular flight, but I have done a little research and am guessing that it is the one that took place in Bagnols-sur-Cèze on the 13th of August, involvinglocal man Monsieur Ballet and his friend Monsieur Darroussin. Below is an example of a postcard marking the event, and the Museum of Fine Arts in Boston has a charming small box from the period that was made to commemorate the flight, in their collection. 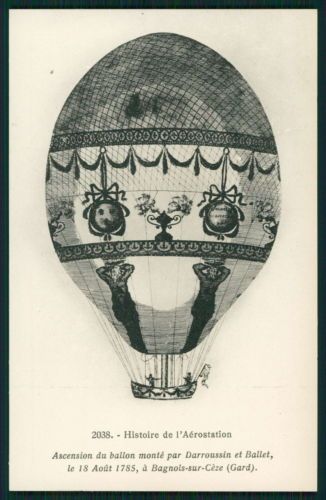 With its various shades of translucent blue enamel and the white and yellow gold engraved balloon, it is notable for blue-tinted upper sector, created through a gold electroplating process. 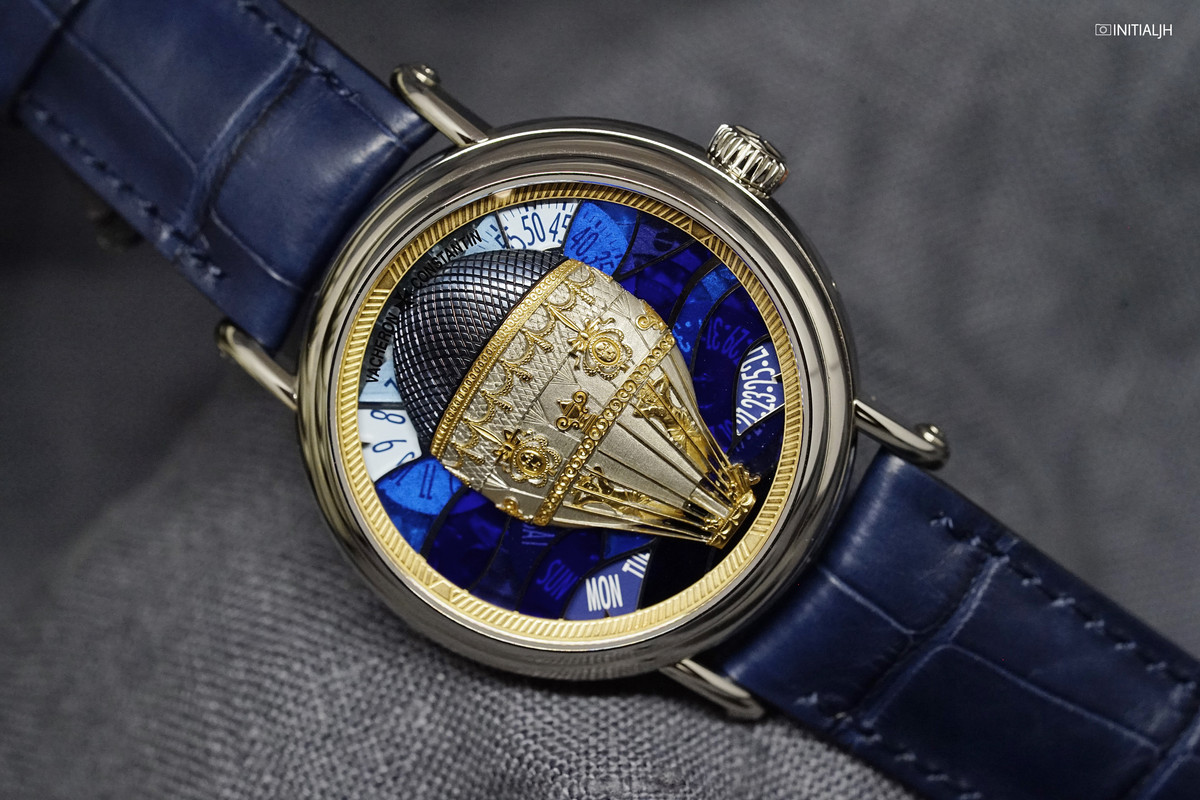 As mentioned at the outset, all of these beautiful new 2018 models combine hand engraved micro sculptures, with translucent backgrounds in plique à jour enamel on the dial side. The dial material is either 18 carat 5N pink gold, 18 carat 3N yellow gold, or 18 carat white gold, depending on the model.

The balloon engraving process used is called pounced ornament engraving, which is a combination of tracing to transfer the image (the ‘pouncing’) and engraving. It starts with an engraver tracing the outlines of the balloon through dry point. They then sculpt all the material such as gold to get the three dimensional effect, carving out the body of the balloon, basket, ropes etc. and the ropes. All the engraving, including those of the animals and humans, is done using tools called ‘burins’.

These balloons are set against a translucent background of plique-à-jour (‘open to light’) enamel, a technique similar to stained glass and reminiscent of cloisonné enameling, with the absence of a base creating an effect akin to that of a stained glass window. These watches also mark the first time that Vacheron have used this type of enamelling. The liquid enamel is applied in cells, with the dial sitting on a temporary glass base to keep the enamel in place during the firing process.

As well as its decorative effect, the use of a translucent background also means that through it, at certain angles you can see the automatic Calibre 2460 G4/1 (base Calibre 2460 SC) inside. This movement is what drives the ‘dragging’ hours and minutes, and the jumping day and date functions. It beats at 28,800VPH and has a 40-hour power reserve. The movement has been specially modified for this collection with a 22k gold rotor, engraved and domed to resemble a hot air balloon. 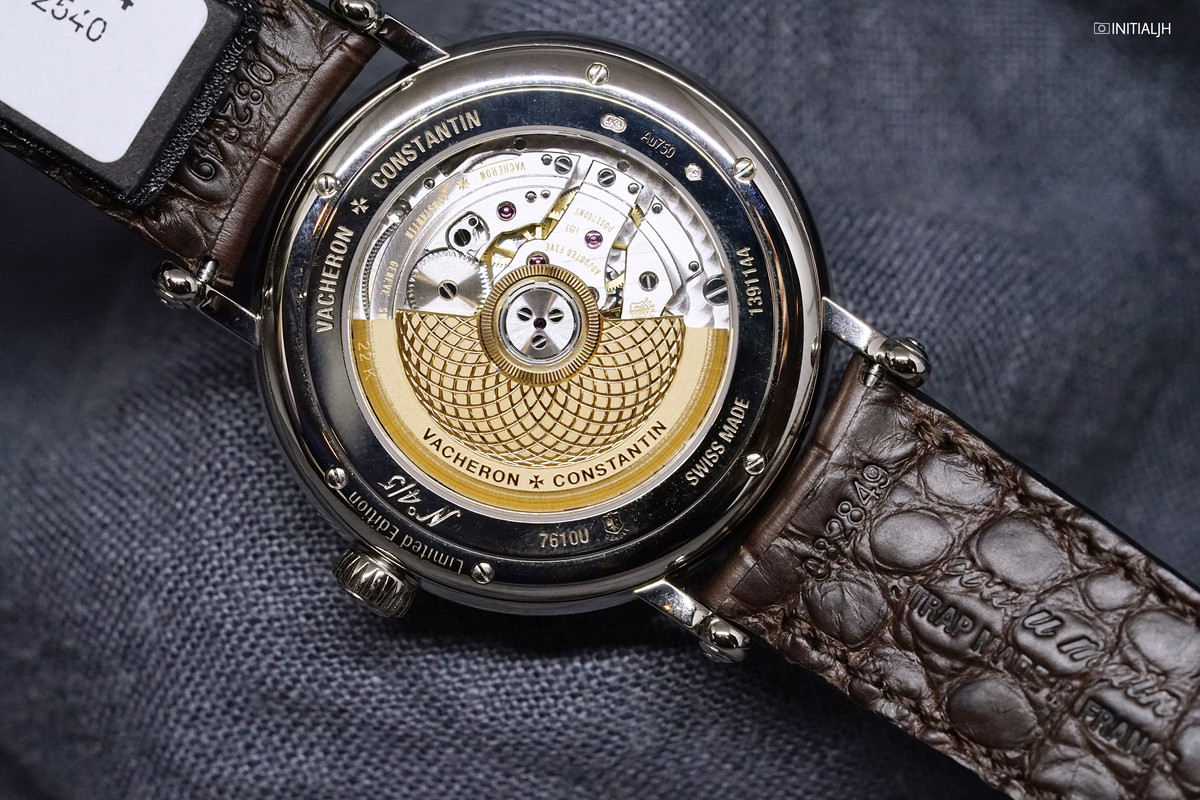 The balloon theme extends to the flange around the enamel dials, which are rose gold and engraved to resemble balloon ropes.

The Les Aérostiers cases are in 18 carat white gold, and in a new case that has narrow lugs topped with screws. They are a very comfortable 40mm, with a thickness of 13.30mm, and have matching alligator straps with white gold deployant clasps. Each watch comes with a corrector pen to make any required adjustments.

Vacheron’s Métiers d’Art collection has been a very diverse offering over the years, but the underlying focus on craftsmanship and creating something of individual beauty, has remained. Whether the particular creation has been to an individual’s taste or not is obviously subjective, but there’s no denying the richness of detail and work that goes into them.

The price for each of these new Les Aérostiers is USD135,000.