Watch brands love a reason to create a special watch, especially for their horological landmarks, as it were. Last year, Girard-Perregaux released the ‘La Esmeralda’ wristwatch, an homage to a pocket watch of the same name, famed for its three solid gold bridges. I recently had the opportunity to see with thanks to The Hour Glass in Sydney.

The Girard-Perregaux name as we know it came into being in 1856, four years after the establishment of Girard & Cie, with the marital union of Marie Perregaux to Constant Girard. The Esmeralda wristwatch is mentioned as marking the 225th birthday of Girard-Perregaux; this date derives from the watchmaking brand Bautte, establshed in 1791 and merged with Girard-Perreguax in 1906.

Launched in 1860 (and with a patent registered in 1884), the tourbillon with three golden bridges, which was to become perhaps Girard-Perregaux’s most enduring horological trademark, was not just a significant technical achievement but also aesthetically avant garde for the time. In that era, watch movements were about utility first and design second; although there were obviously movements of beauty, these were not the norm.

The most famous example of the three bridges is the rose gold ‘La Esmeralda’ pocket watch, for which the Paris Universal Exhibition of 1889 awarded a gold medal. It took its name from the Paris and Mexico City shops of a watch dealer, and at one time was owned by General Porfirio Diaz, President of Mexico. It now forms a part of the Girard-Perregaux museum collection.

Despite its historical significance to the brand, Girard-Perregaux put the three bridges aside, ceasing production in 1911 and focusing on more modern offerings until 1981, when they revived it in the form of a pocket watch. Its revival was no small project, requiring the manufacture of parts that had long since been taken out of production. The watchmaker responsible for this revival project was Denis Schnegg.

Exactly ten years later came a wristwatch with a tourbillon with Three Gold Bridges, which kick started the re-emergence of the movement. Denis Schnegg was also the man behind this huge project. The movement architecture had to be reduced and modified so that the tourbillon and bridges could be on the dial side.

After the first wristwatch in 1991, the three gold bridges collection grew. Alongside mechanical developments such as the creation of an automatic model in 1999 which had a platinum oscillating weight (the use of platinum was a technical solution – greater density meant a reduction in rotor size for the movement) came various streams of developments and iterations. It found its way into women’s watches, in different cases, different materials, as well as new complications such as a bi-axial tourbillon and adding a minute repeater. 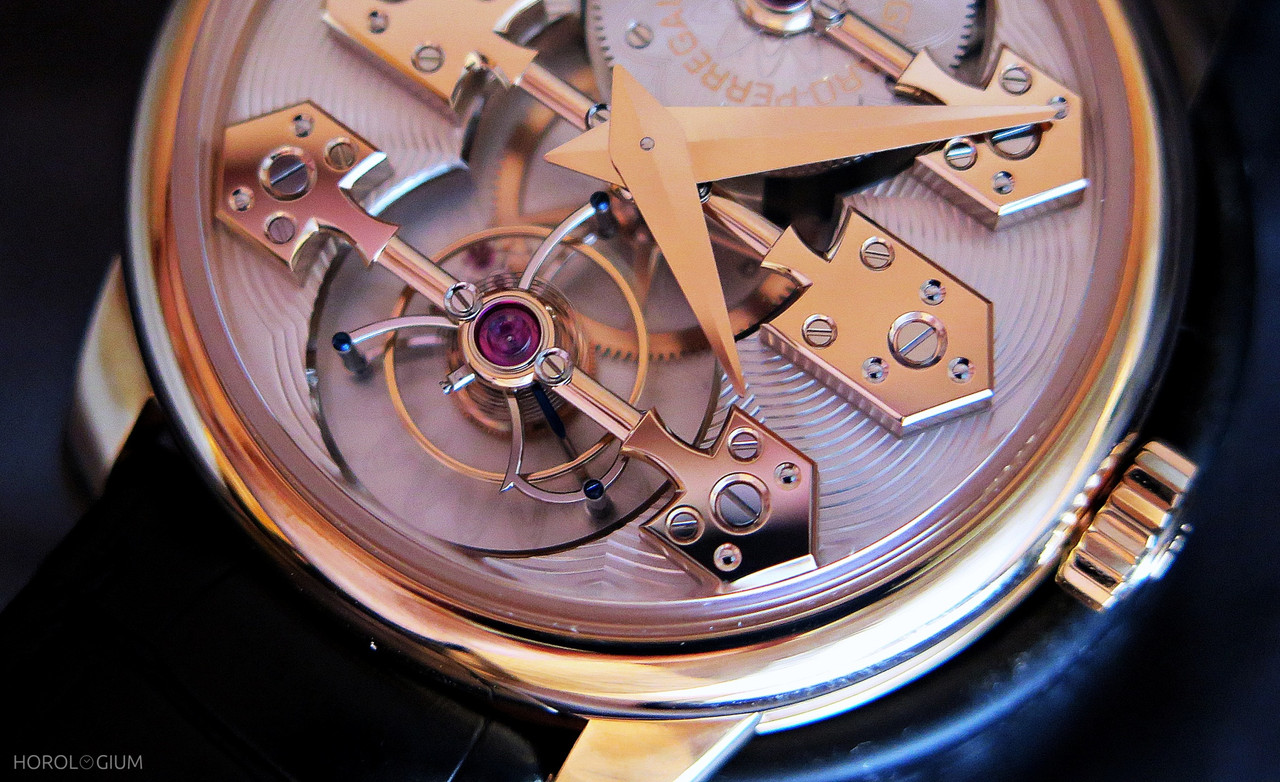 Regardless of their modern manifestation, the three bridges are still proudly showcased. This anniversary wristwatch inspired by ‘La Esmeralda’ is very much reminiscent of the original on which it is based, with the distinctive ‘arrow’ bridges of the original pocket watch the same as those that appear in this wristwatch. You don’t need to look at them under a loupe to see how beautifully hand polished and bevelled these solid gold bridges You can see, in the video below, the original versus this version.

What makes the three bridges wristwatch movement architecture so special is that everything is aligned on the dial side, which requires hiding some components on the other side of the movement. Instead of a large bridge covering the entire movement, Girard-Perregaux have aligned the barrel, gears and tourbillon under parallel, arrow-tipped bridges. The solid gold bridges with which we are familiar nowadays were not always as such, the first were simple steel strips.

The bridges are part of the automatic Calibre GP09400-0004. With a diametre of 36.60mm and height of 8.41mm, it has 310 parts and 37 jewels. It beats at 21,600VPH and has a power reserve of 60 hours. The beautiful finishing of the three bridges themselves extends of course, to the rest of the movement, with sandblasting, guilloché, engraving and bevelling. 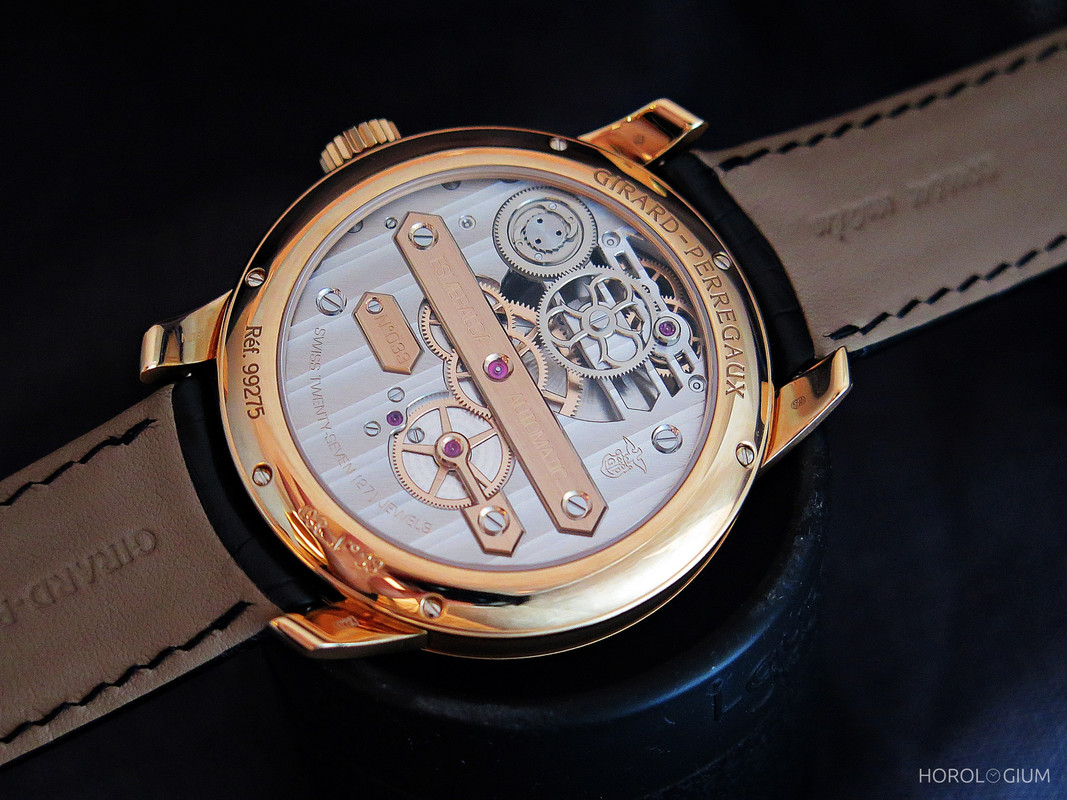 If you have spent any time looking at vintage and early pocket watches, what pops out is how many of them would translate well to a modern wristwatch form. The Three Bridges is a prime example of this. The way in which Girard-Perregaux have modernised the Three Bridges reinforces its rightful significance to the brand, but the Esmeralda wristwatch is a very beautiful classical homage piece that makes you go ‘wow’ when you see it. It’s a watch with a certain degree of heft to it by virtue of its size and metal weight, but it’s very wearable. 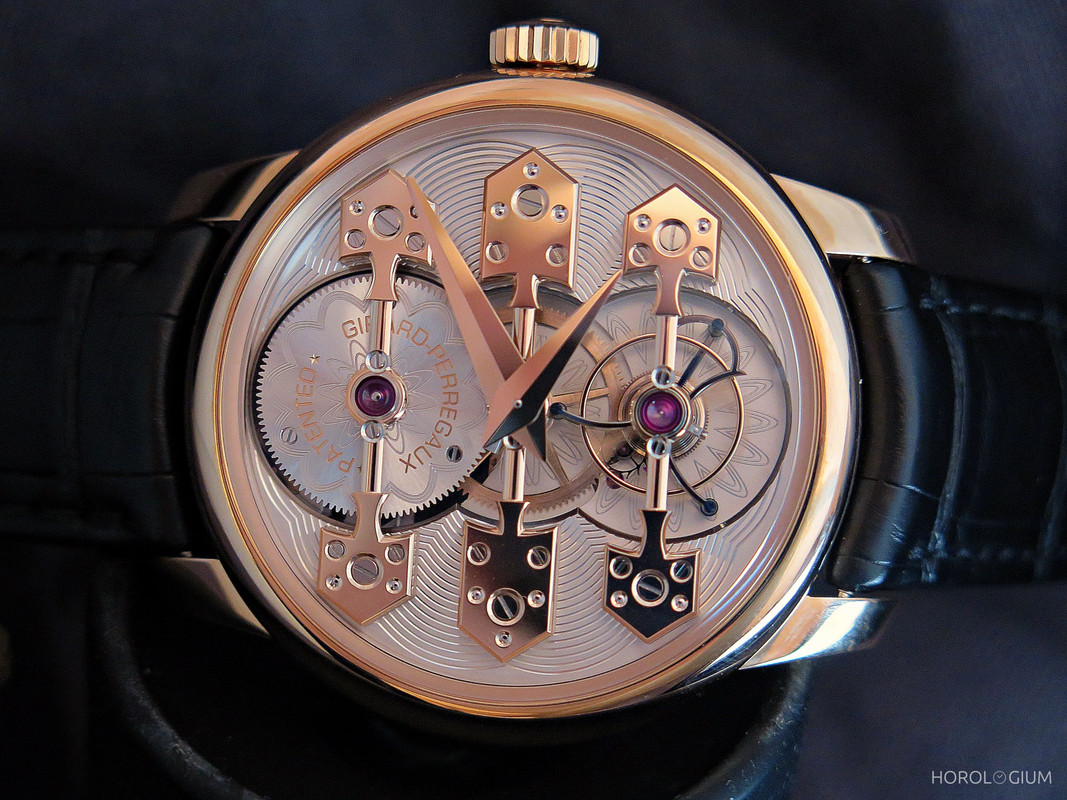 The 43.70mm rose gold case is 14.5mm thick and comes on a black alligator strap with a pink gold triple folding clasp. If you’re interested, the RRP is just under AUD 300,000.