In 2013 Zenith launched the Christophe Colomb Hurricane Grand Voyage, a limited edition piece that was part of the Academy Christophe Colomb Hurricane collection. The very distinctive Christoph Colomb complications fall under Zenith’s ‘Academy’ collection, and feature the large fishbowl-like sapphire crystal protrusion at 6 o’clock that worries anyone who sees the watch in terms of its wearability. Its purpose, however, is not just to be quirky – Zenith have suspended the escapement and balance in a cage so that it looks like a floating mechanical ball, to try and increase the preciseness of time measurement – no matter how the wearer moves his or her wrist, you will see that the balance will always move back to a horizontal position – it is called a ‘cardanic suspension’, or ‘gimbal’. 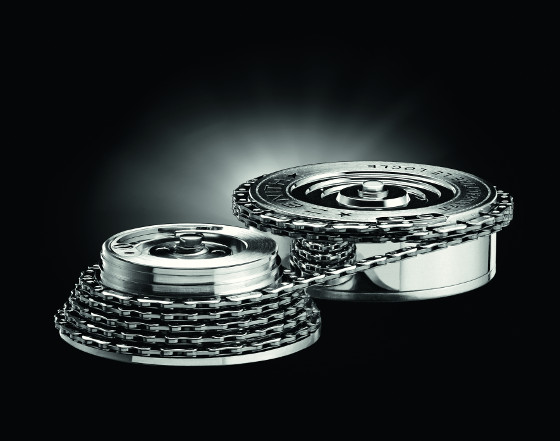 As well as the gimbal, the Hurricane also utilises a chain-and-fusée, visible underneath the main hour and minutes subdial, to control variations and stabilise force as the mainspring unwinds. Although it seems to be popping up now and then in recent years, a chain-and-fusée is a rare beast and technical feat; and it took Zenith some two years to get it right for the Hurricane. The chain is made of 585 components and is 18cm long. The movement inside it is the manual wind El Primero 8805, with a fifty hour power reserve. In total, the movement has a quite crazy 939 parts.

The hours and minutes are at 12 o’clock, small seconds at 9 o’clock, and power reserve indicator at 3 o’clock. The hour markers are black lacquer and the hands blued steel. The 45 mm rose gold case has an open case back for the owner’s viewing pleasure.

This Grand Voyage II limited edition model features enamel, hand-engraving and miniature painting work on top of the already impressive watch, in the voyage theme. It is otherwise identical to the ‘ordinary’ Hurricane. The counterweight of the gyroscopic escapement is decorated with the Southern Hemisphere. All the sub-dials are guillochéd white enamel over solid gold plates. The mainplate has been hollowed out by hand with the Zenith logo and a smattering of stars on a blue lacquered background.

The theme of this piece is Christopher Columbus’ 1492 voyage, and the case back is replete with hand-engraved imagery; Columbus holding aloft the flag of the Spanish monarchy, two indigenous people with a fruit platter, and a macaw. All of these are hand painted. 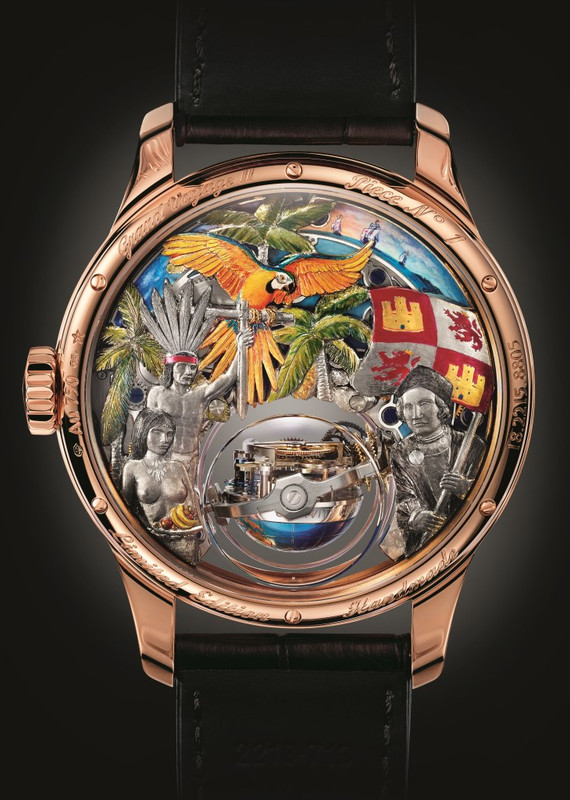 Coming in a limited edition of ten, the Academy Christophe Colomb Hurricane Grand Voyage II comes in a box familiar to those who know the Grand Voyage model – made of mahogany featuring ox bone inlays and with a dual purpose as a humidor with a capacity of 80 cigars. The box is decorated with a screen-printed motif on parchment-style papyrus reproducing Waldseemüller’s planisphere (1507), the first world map to mention the name ‘America’.

I have mentioned before how much I admire the Hurricane watches, and Christopher Columbus’ historical significance is without doubt, but it is worth remembering some other parts of his life, and particularly with regards to indigenous peoples.

Like Loading...
‹ ROGER DUBUIS : Hands-on with the Excalibur Spider Double Flying Tourbillon
MB&F : the end of the HM3 road ›