Girard-Perregaux’s modern ‘gold bridges’ haute horlogerie watches are manifestations of Constant Girard-Perregaux’s mid-19th century tourbillon with three bridges which garnered a ‘first class’ award from the Neuchatel Observatory and a gold medal at the Paris Universal Exhibition in 1889. Those prize-winning timepieces used the tourbillons as both a technical achievement and as a design centrepiece, integrating the tourbillon in what was then a radically new manner.

Today’s piece is a diamond bezelled version of the brand’s 1966 Tourbillon with Gold Bridge, created in a very limited edition of eighteen pieces. With its silvered dial, Breguet-style numerals and blued steel leaf-shaped hands, this version of the 1966 Tourbillon is the same, case and dial-wise, as Girard-Perregaux’s 2011 release, celebrating their 220th birthday, of the 1966 Tourbillon with Gold Bridge Anniversary Edition, which was produced in a limited edition of fifty pieces. The regular haute horlogerie production model, REF : 99535-52-131-BKHA, uses indices instead of numerals, and has a pink gold hand instead of a blued one. 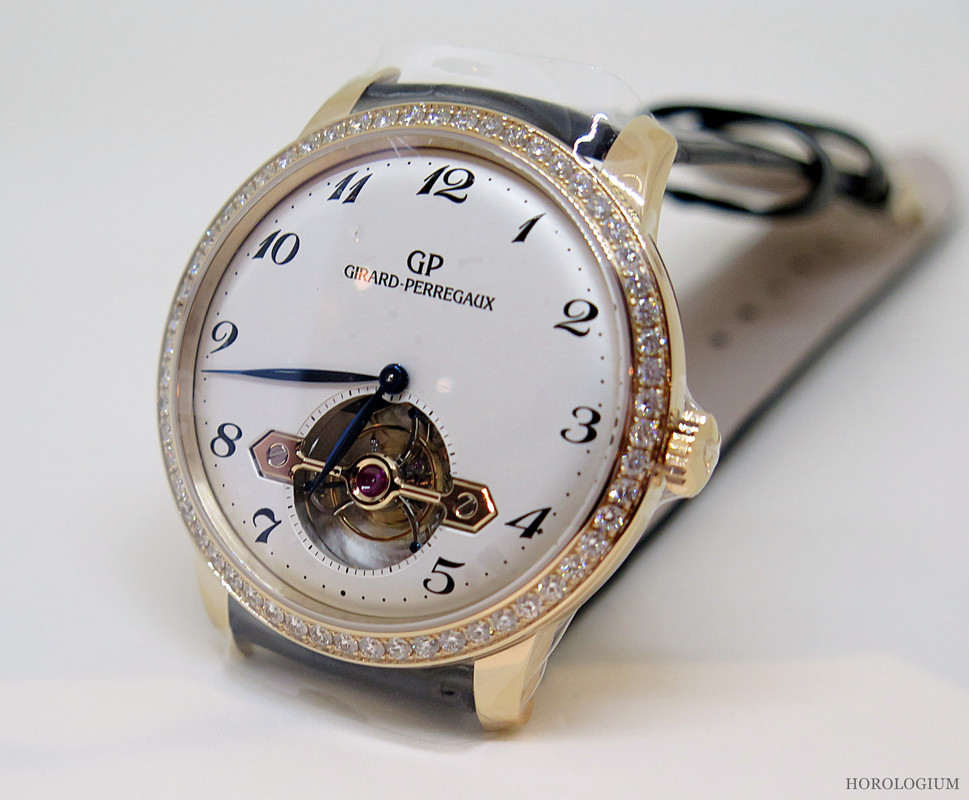 The tourbillon itself has 72 components, weighs 0.3g, and as well as being a tourbillon, also doubles as a small seconds indicator.

The 40mm case is pink gold and contains the GP09600-0014 automatic movement, with a power reserve of forty-eight hours. Although classified as a men’s watch, at this size it is pretty much unisex, working both for women who like larger watches and men who like a little bit of a shine on their tourbillons. It comes on a black alligator strap and the Australian RRP is $228,420. With only eighteen of these available, for those interested, its reference is 99535D52A111-BK6A.