We love a good 1970s retrotastic watch at Horologium, and Hamilton have released a new ‘version’ (I’d probably call it a close relation) of their 1971 Pan Europ, one of the first watches equipped with an automatic chronograph movement and which Hamilton re-issued in a modified way in 2011 in (you guessed it), a limited edition of 1,971. The success of the re-issue has lead to this simple day/ date version as a follow-up.

This new watch is in a 42mm barrel shaped case (water resistance 50m) that is the same shape but 3mm smaller than the 2011 Pan Europ chronograph. The bright blue/ black rotating bezel has an aluminium ring, and the blue/ black is matched to the blue/ black dial with white reflector ring. The hands have SuperLuminova, and the centre seconds hand is red, which is matched on the underside of the perforated black leather strap and the NATO. The day-date function at 3 o’clock is, of course, the distinguishing feature of this new model. 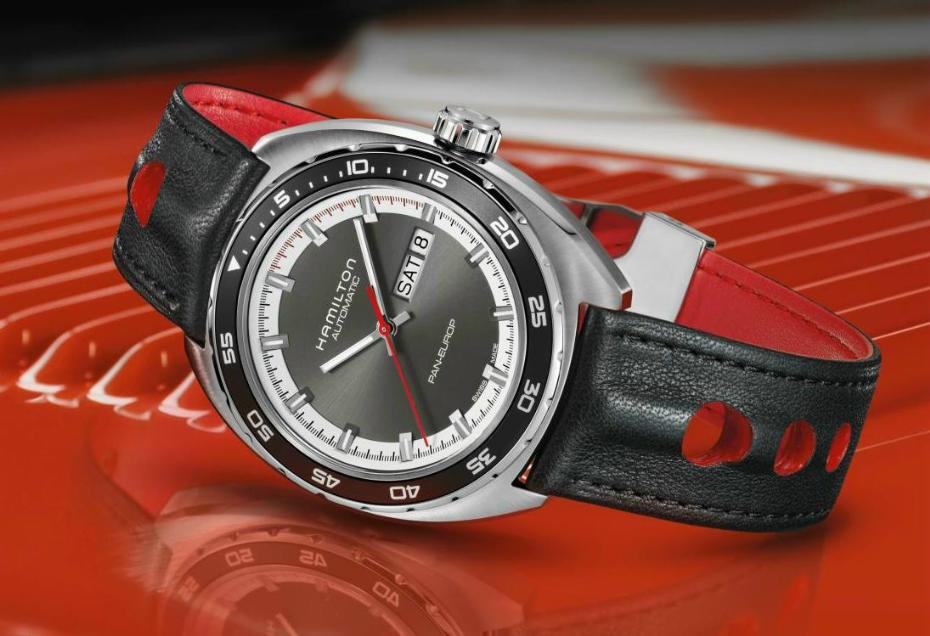 Inside is the new H-30 movement, with an 80 hour power reserve. The Pan Europ will be available in either charcoal gray with black bezel, or blue with blue bezel. It will also be available with either a woven NATO or a leather strap. Both look good, but I’m voting NATO.

The original Hamilton Pan Europ model on which the 2011 version was based contained the legendary Calibre 11 automatic chronograph movement, co-developed with Breitling and Heuer on a base movement from Buren. The 2011 Pan Europ chronographs used the ETA-produced H31 movement, with a power reserve of 60 hours.

If you’re a purist, neither the 2011 modernised version of Pan Europ nor this one might be satisfactory to you, but at a RRP of USD1,095, this is an affordable good looking 1970s-influenced watch that although it isn’t a direct descendant, is still a relative of an important 1970s watch.

If you want to learn more about the 1960s race for the development of the world’s first automatic chronograph between Movado/ Zenith versus Heuer/ Breitling/ Hamilton/ Dubois Deprez, visit Onthedash.